The controversial mini-expansion for The Lord of the Rings Online, War of Three Peaks, has finally been detailed by Standing Stone Games. On the expansions page, you can see what separates the different varied costs of War of Three Peaks, as well as check out a new trailer for the content update, which goes live today.

SSG made news a few weeks ago when it was revealed they would be releasing a mini-expansion, with costs ranging from $20 up to $99. We know now what those varied versions will include, though it is still up to the market to decide whether or not the extra cosmetic and convenience items are worth the extra price.

Each version will include the full War of Three Peaks content, however, from there the costs go up depending on the mounts and cosmetics the version has with it. The Collector's edition and Ultimate Fan Bundle will both include a new carry-all item, called the "Three Peaks Large Carry-all selection box." This item, according to the LotRO expansion landing page, is described as way to help hold more items, like the carry-alls introduced with Minas Morgul a year ago. 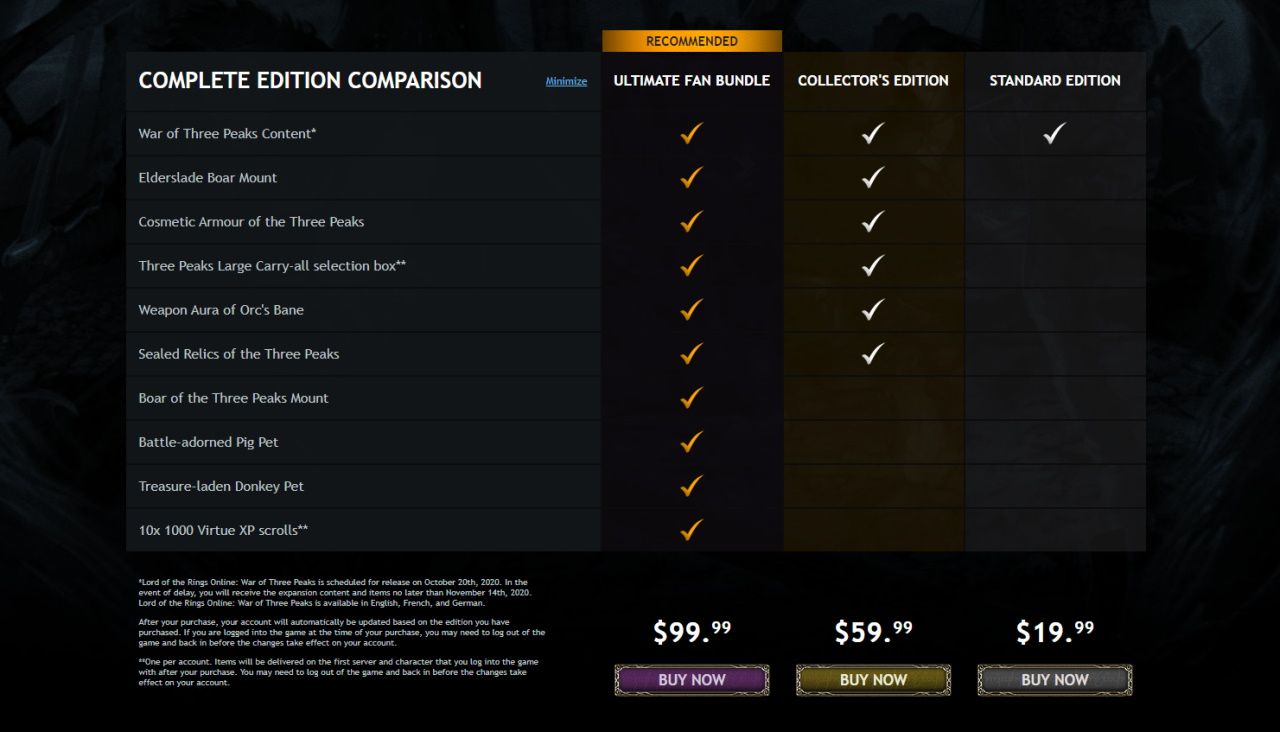 Additionally, the higher end versions will include extra mounts, weapon auras, while the Ultimate Fan Bundle will give players new pets, and exclusive mount, and 10x 1000 Virtue XP Scrolls.

War of Three Peaks brings players to the North of Middle-earth, following Prince Durin, to help reclaim Gundabad. The new mini-expansion will bring with it new Elderslade missions, a "way for one or two people to play together, and supports players at multiple levels of the game[.]" The new missions will be open to players levels 20 through 130, and is a way to earn loot and more.

Also coming to The Lord of the Rings Online is a new six-person instance, Shakalush, the Stair Battle.  War of Three Peaks also brings with it a new Raid, Amdan Dammul, The Bloody Threshold.

The final battle of the War of Three Peaks has begun. Prince Durin Stonehelmson of the Longbeards leads the Gabil'akkâ , a great host of united dwarves, to the very gates of Mount Gundabad. But Gorgar the Ruthless, son of Bolg, has one last surprise in store for those who would seek to usurp him....

To celebrate the announcement, The Lord of the Rings Online released a new trailer, showcasing some of the vistas and areas you'll be able to explore in te new content, which goes live today. Not going live today is the new Brawler class, which was revealed recently, but confirmed to not be a part of the War of Three Peaks mini-expansion.