Phantasy Star Online 2: New Genesis has officially been out for over a year. During that time, the game has grown in size and scope. SEGA recently released the latest update which introduced the Kvaris region to the game. If you haven’t hopped into the game in a while, here’s a look at what’s new.

Last week I had the chance to jump in with Alyssa, a Phantasy Star Online 2 community management coordinator, to go over some of the changes that have come to PSO2:NGS with the Frozen Resolution update. For those unfamiliar with New Genesis up to this point, the initial expansion launched back in June of 2021 with the Aelio region. Then in December of 2021 the rocky desert of Retem released. Now, the icy mountainous region of Kvaris has come to NGS, and it has introduced some new and interesting features to the game.

I won’t be spoiling any story elements, as those are the primary driver to push through much of the content, but I will give a short synopsis on where we begin for the Kvaris update. Once in game and situated in the bustling Central City main plaza, you’ll have a quest that will take you to Commander Crawford, who is the leader of the ARKS Defenders. He charges you with the task of heading into Kvaris to look for Ilma, an important new character that you’ll have to find as you push forward through the story. Along the way you’ll meet Kukka and Meri, two NPCs that will aid you on your journey. If you’ve skipped a lot of the previous story of PSO2: NGS and you want to get all caught up, you can now head to an NPC at the tower in Central City to watch all previous cut scenes and play through some of the earlier story missions from both the Aelio and Retem regions. 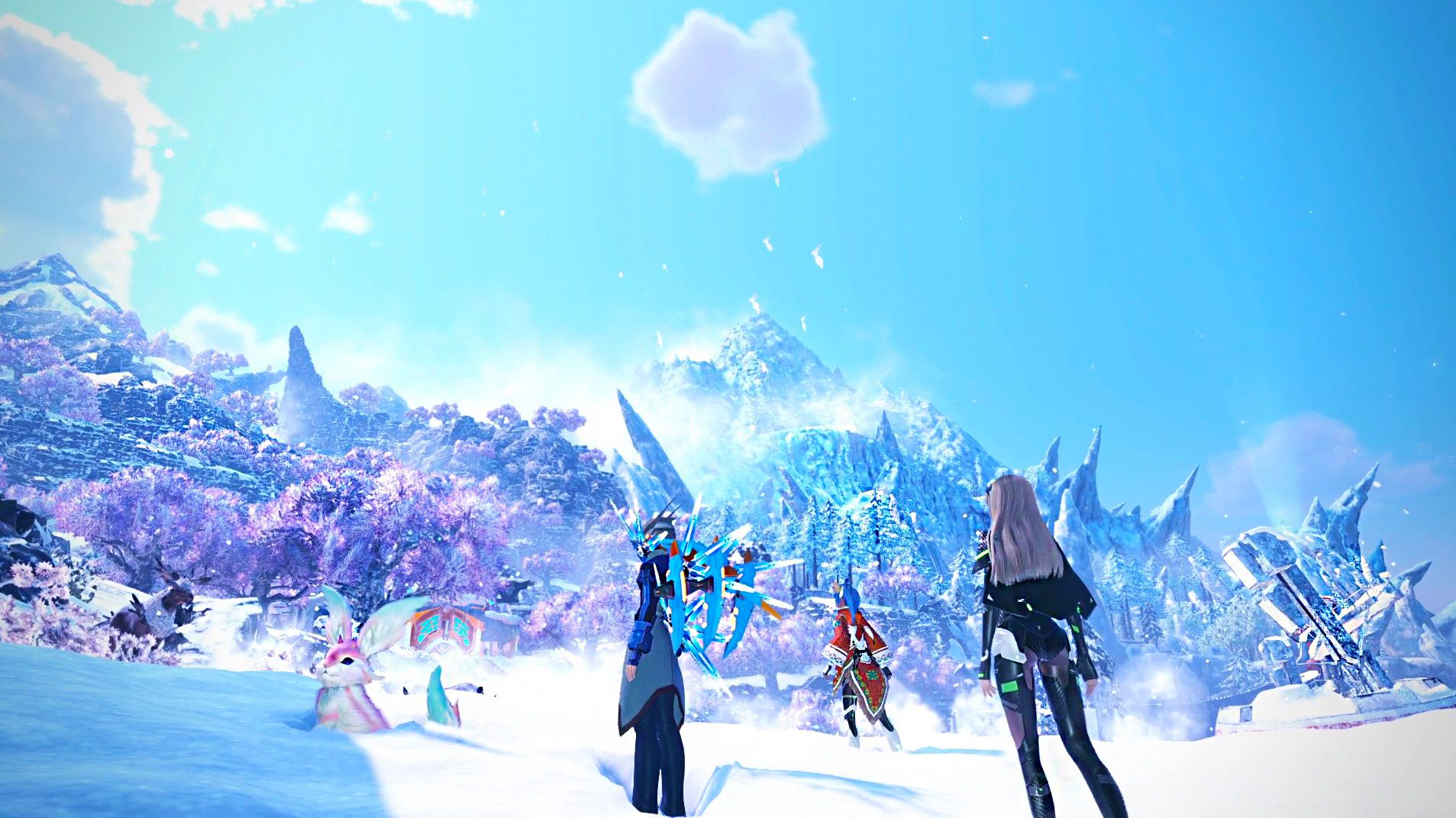 This feels quite similar to PSO2 Classic, where you would essentially run the majority of the story aspects of the game, standing at a counter, and clicking through cutscene after cutscene, with some short missions interspersed within. While the story has gotten better by leaps and bounds in terms of how it’s presented, at least while the content is fresh, it’s nice that they’ve added an easy way to get caught up on the story for those that really want to dive into what’s happening on Halpha.

The story, and exploration in general will also introduce players to some new enemies. While some enemies are only new to NGS like the Marmoths, which are mammoth monsters that have been around for some time in the Classic version, there are other enemies like the Relyn that can be a pretty tough customer, especially if you have yet to sufficiently increase your Battle Power. Increasing your Battle Power can be difficult, but doing so is easier than ever now that SEGA has increased the level cap to 60 and you can now obtain 6-Star weapons. There are also some early quests leading up to Kvaris which will give players a substantial boost alongside some powerful weapons so that you can quickly gear up for the new region. 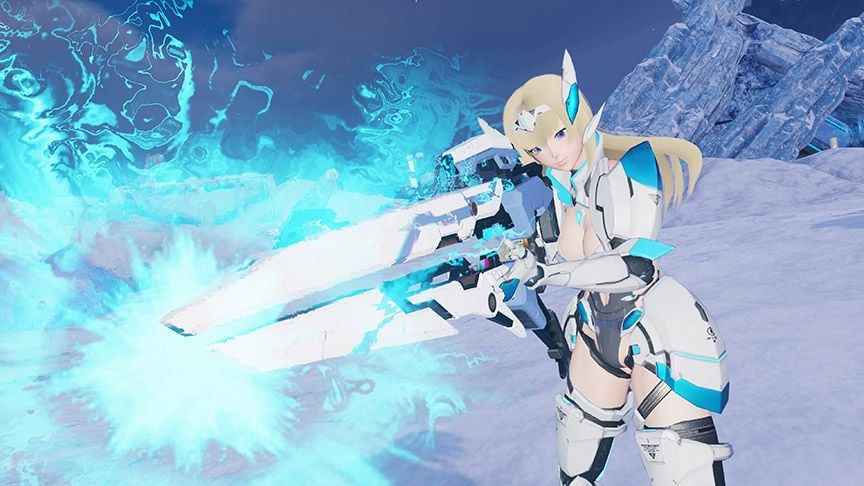 The region itself is quite large, about the size of Aelio, and it has a lot of vertical elements to traverse. Another new feature is the ability to take damage from the environment. On areas within and around Rayjord Gorge, just being there without the appropriate protective gear will damage a player, eventually ticking away at your health to the point where you can freeze, rendering you completely immobile and subject to attacks form enemies and further damage from the cold. It’s a novel feature that will require players to equip gear with Lowe temperature Damage Resistance. As gear and upgrades are one of, if not the main priority in NGS this change falls into line with extending the core loop of the game. It sets a precedent for future regions, as we may start seeing new areas that will require different types of gear to survive their harsh environments.

Another special new feature that NGS has added, answers the question, “Why doesn’t Phantasy Star Online have rocket snowboarding?” The new Floating Board is a feature that was added, where players can find a floating board icon out in the world, and then mount and glide their way through the terrain. Initially you can only stay on the board for a limited time, but there are trials, jumps and checkpoints that will extend the amount of time you can stay on the glider. Aside from some speed boosts and tricks, special items hidden in ice have been hidden throughout the world, and you’ll need these boards to break them out. The rocket board is an interesting new mechanic that may have some lasting appeal if SEGA continues to support it with additional trials and content, which seems likely, as this latest update has also added a series of new Field races where players can compete against the clock and each other as they run, jump and glide through Aelio, Retem and Kvaris. 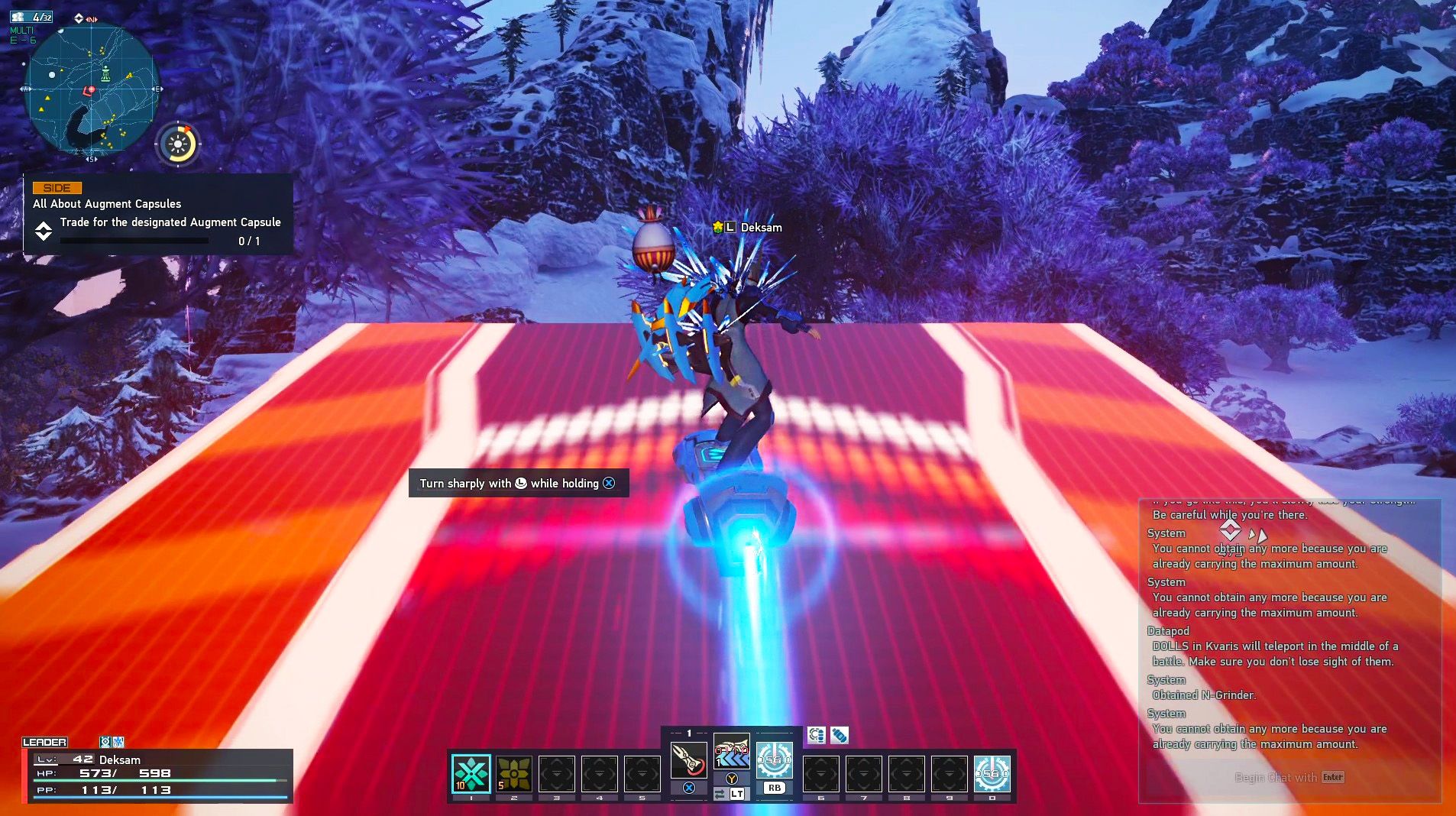 The introduction of new class skills, a new region, new enemies, new mini games, a level cap increase, and of course, new gear to earn, makes the Frozen Resolution update one of the best to date. While playing, I have run into several problems that seem to be ongoing. One of my main hindrances revolves around the slow loading of the game, regardless of platform. I’ve played on both Xbox and PC, and both times the initial loading time can take a minute or longer. Seeing as how NGS is a huge seamless world, it wouldn’t be bothersome, but performance issues have bogged me down several times. I’ve received random disconnects at times, while in other situations, players glitch across the screen, making it extremely difficult to track the movements of other players.

In other cases, player models don’t load at all, and show only as a grey character model, without any defining features. Traversing the Kvaris region is a lot of fun, but more than once I fell between a mountain and a red barrier wall, which forced me to fast travel to get back into the game. A lot of these issues have been around since NGS has launched, and I’m not entirely sure these are problems that can be fixed. What the team has done with NGS by building it off of PSO2 Classic is an amazing feat, but some of these issues were even present in the Classic version, which makes me think it may just be a quirk that PSO2 players will just have to learn to live with. 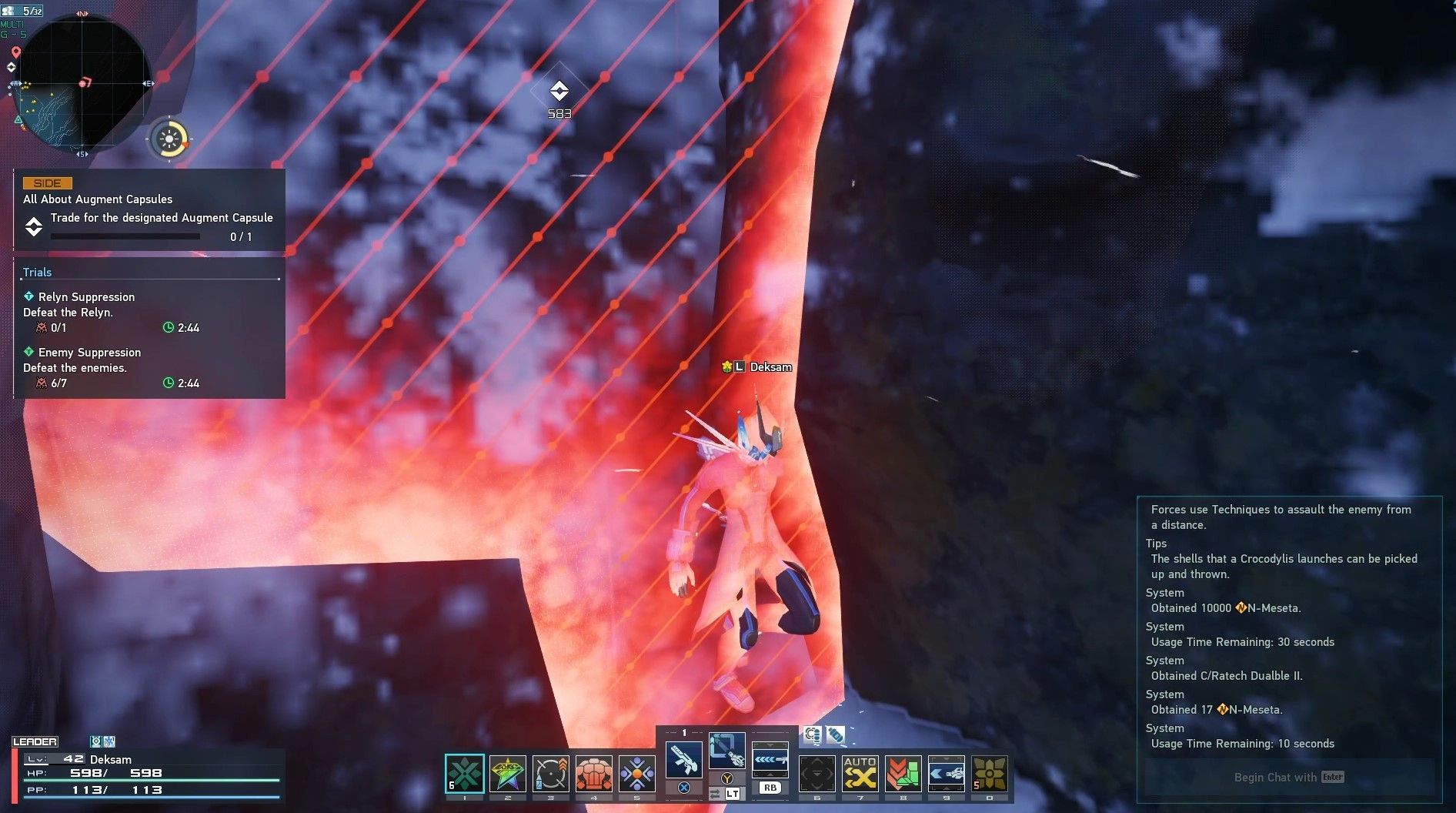 To round out my PSO2: NGS impressions, I was able to ask Alyssa a few questions that were on my mind. Not too long ago, SEGA disabled PSO2’s unique Symbol Art feature for a time while they fixed an issue related to “inappropriate” Symbol Art being sent to local area chat. I asked Alyssa if SEGA has fixed Symbol Art abuse or cracked down on those that abuse the system. “It’s never necessarily fixed, it’s something where it’s self-policing in a sense that players want the best of the community, and the Phantasy Star community in general right now is in a really positive place, so they reintroduced the feature with some changes.” Alyssa told me. Back in September of 2021, SEGA released a statement declaring that this kind of toxicity would no longer be tolerated. This was followed by a ban of over 1600 accounts.

I also asked how the population looks after each new major update. Are people completing the content and moving back to Classic or other games, or have these updates kept players involved? “Obviously we saw a huge influx of players at launch, as any game does. What we saw with Retem was a lot of updates that players needed. Our core players were very vocal about what they wanted to see in the world of NGS. When Retem dropped we saw an influx of players come back and an overall population rise. Features that keep players in game, like social features like concerts, custom music, expanded quality of life features have helped bring players back to NGS.” Alyssa said. Altogether, New Genesis has performed pretty steadily, according to SteamDB, peaking at around 4 thousand players a day, though markedly down from the 60,000 players it had on their Steam launch. While Steam doesn’t get the full picture of who is playing, as the game is also available through other launchers, like the Windows and Epic Games Store, as well as many players relegated to the Xbox, the steady nature of the SteamDB numbers shows that there is currently a die hard fanbase that has consistently stuck with the franchise. 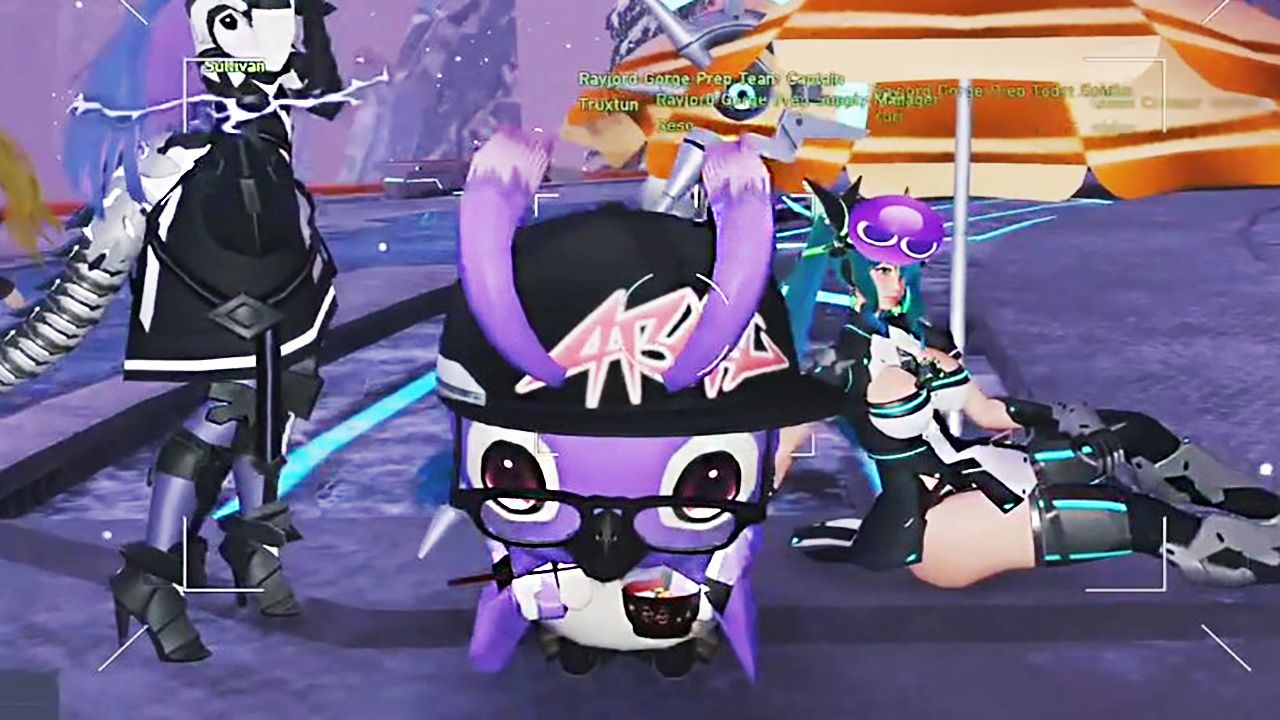 The new region of Kvaris is definitely a boon to PSO2: NGS players. There is a lot here to keep you busy for several weeks, and that doesn’t even count leveling any alts. I do feel that despite all of its new features and quality of life improvements, it may still not be enough to bring in new players to the franchise. There are tons of quests and tutorials on the gear, exploration, and skill systems, but even as a PSO2 veteran it can get overwhelming. However, if you’ve played NGS before, then you really can’t miss this update.