When Outriders released just over a year ago, players all over the world were introduced to the dangerous land of Enoch, and their unique brand of God-like beings known as the Altered. Despite some harsh growing pains, which included some server instability, matchmaking issues, and a few inventory wiping problems, Outriders still managed to captivate millions of players with their fast-paced action, exceptional gear system, and some really cool classes. Now, People Can Fly has a new paid expansion on the way, and if our short preview of Worldslayer is any indication of what’s to come, you better prepare yourselves for a whole ‘lotta slaying.

If you haven’t played the original Outriders game, I won’t spoil any of the major plot points in this preview. I will say I think it’s clear that the story isn’t over, and we’re just starting to learn the secrets that Enoch holds. More importantly, the end of the world is nigh! The Anomaly is spreading, massive destruction and extinction is incoming – but wait – there is hope! In order to save everyone, you’ll have to fight your way through a brand-new story campaign, filled with new enemies, new locales, and plenty of new guns and gear to keep your trigger finger happy. New players who are just coming into the Outriders world, will be able to start fresh at level one, or use a new Level-30 Boost feature to catch up with your friends, and experience the new content right out of the gate. If you haven't played the original Outriders game, you'll have to shell out $59.99 for Worldslayer, that comes as a bundle with the original game. If you do happen to already own Outriders, you'll be able to pickup the expansion for only $39.99.

Worldslayer will introduce two new 5-piece legendary armor sets for each class, and new 3-piece legendary armor sets that will be universal for all classes in addition to over 100 new gear pieces. New mods will also be available, which will undoubtedly excite players who really like mixing, matching, and theory-crafting new builds. As someone who was enamored with the gear and mod system when the game released, I’m giddy with anticipation to see what new items they’ve added. Worldslayer has also increased the gear cap to level 75, which can be obtained by reaching Apocalypse Tier 40. Apocalypse gear will also introduce players to a new non-changeable 3rd mod-slot which gives players even more of an opportunity to become the most powerful Altered you can be. Apocalypse Tiers will replace the original challenge tiers, such as the World Tier and Expedition Tier systems. 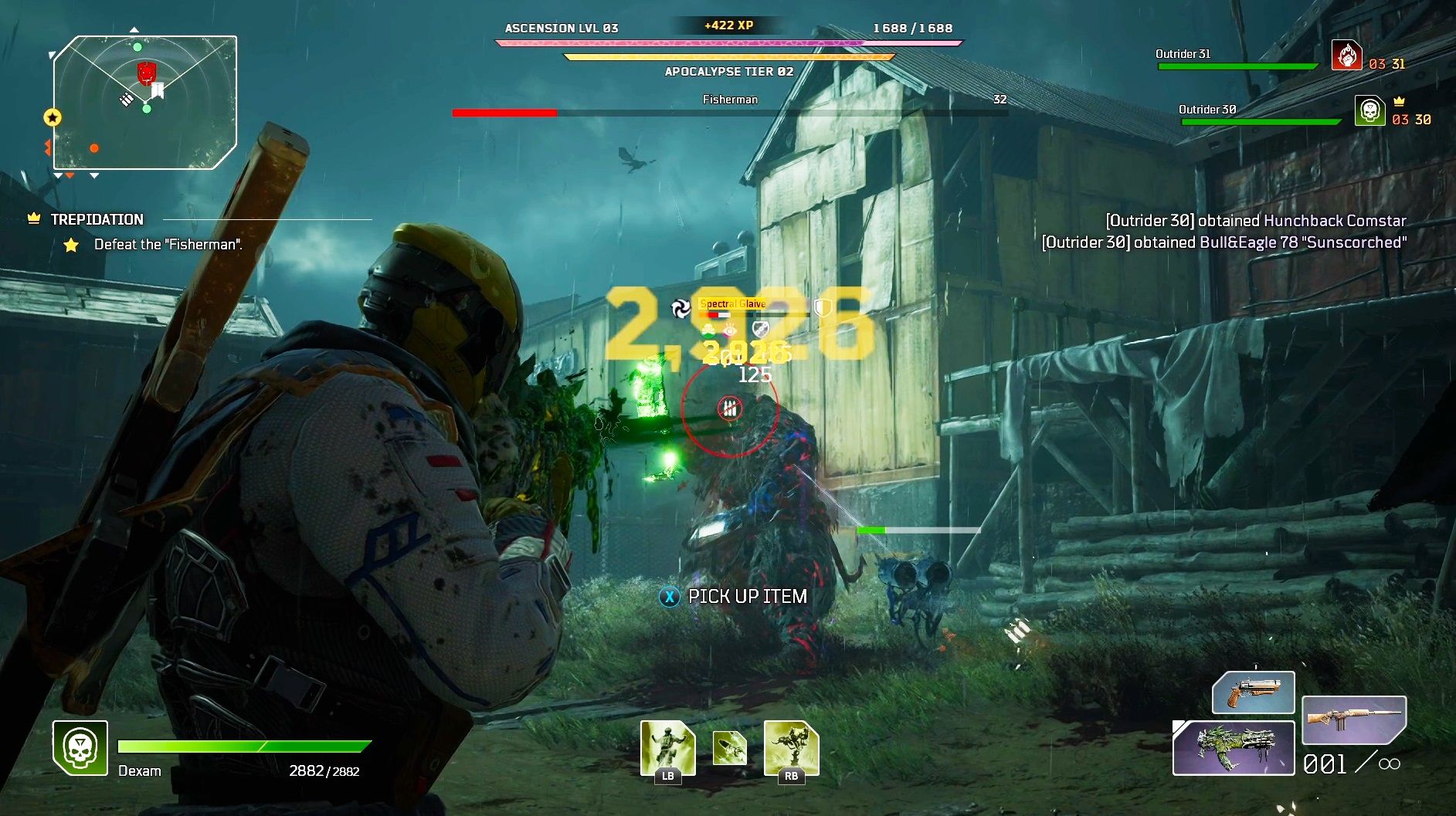 Apocalypse Tiers will also be retrofitted into the original content of Outriders. Like World Tiers, Apocalypse Tiers will increase the difficulty of the enemies you battle, and the strength of the loot you obtain. Unlike the previous tiers, they will not be segregated based on the mode you are playing, so when you start playing Worldslayer, if you’re playing on Apocalypse Tier 15 in the campaign, you’ll also play on Apocalypse Tier 15 in Expeditions. This is a fantastic streamlining of the difficulty tier system that I’m really looking forward to, and the increase in difficulty tiers leaves a lot to look forward to. Despite all the new gear and difficulty settings, no new classes have been added, but that doesn’t mean that PCF has forgotten things on the progression front. This is what the team had to say in relation to the possibility that they would create a new class:

"Definitely, building a new class at this point was completely out of scope. We would rather spend the time in polishing what we already have, then trying to invent something completely new. I think this is the theme of Worldslayer, further enhancing and building up on the Outriders experience and making all the things we have made, more exciting and more built up. This philosophy is also visible in the new environments and the new enemies, especially some of the new bosses. They're some of the best we've ever done. "

In Worldslayer players will be introduced to the PAX Class trees, which will give each of the 4 classes new options with an entirely different class tree that unlocks at level 30, in addition to the original class trees that players start the game with. The PAX tree will aid in subclassing your character in impactful ways down the line. While we didn’t get to experience the PAX tree in full force during the preview, it’s always exciting when you can continue to progress your character after you’ve reached max level. But the PAX tree isn’t the only way to progress your character after you’ve hit the max level of 30. 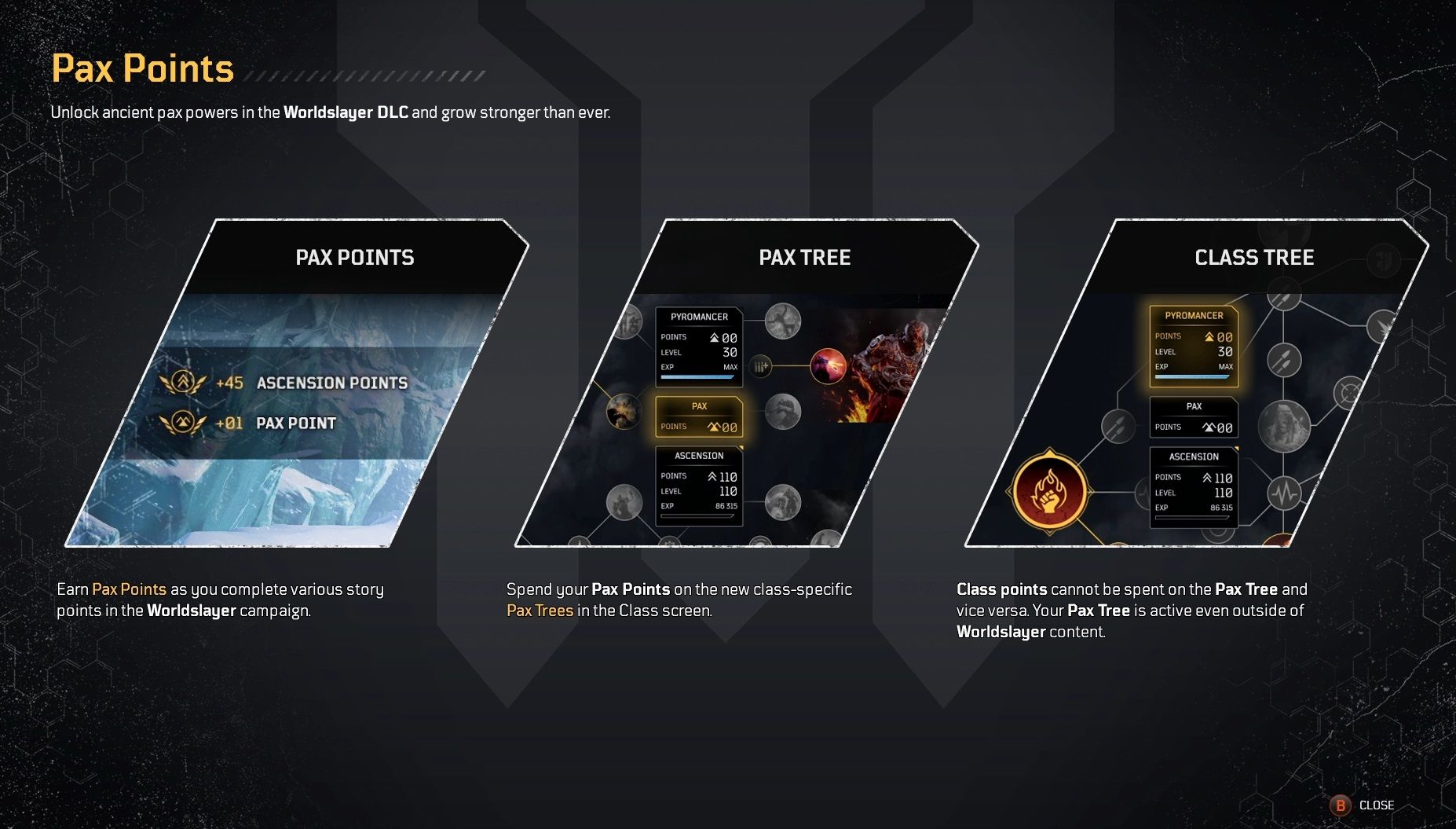 Ascension points are a new feature in Worldslayer that will allow you to earn experience, and ascend several different character attributes, such as Brutality, Endurance, Prowess, and Anomaly. Each of those attributes will have additional categories to invest in, that directly affect your stats, like HP, critical damage, and more. You will be able to max out all of these attributes by obtaining 200 Ascension points, but the team at PCF believe that it will take somewhere close to 360 hours to obtain them all. At any point, players will be able to respec their PAX and Ascension points for free, just as they could with their original talent trees, so they can toy around with different builds whenever they choose. PCF has also teased a little about a new form of end game called the Trial of Tarya Gratar. During the campaign players will be introduced to Tarya Gratar as part of the PAX civilization, but after completing the story, it seems this new challenge, which was designated as “completely different than Expeditions”, will await players. Here is all that the development team could say on the new end game.

The team at PCF says they will divulge more information about the game later this Summer, which is fantastic, because Worldslayer is set to release on June 30th, 2022. That only gives us a couple short months to find out more about this new tantalizing end game. As for my experience with the preview content, I kind of feel like I did back when I played the demo over a year ago. A short demo isn't enough to give a sense of what Outriders is all about. After teaming up with other previewers, we began our missions with fresh characters. Playing through the first couple missions in the campaign was definitely enjoyable, in a kind of “I get to continue the campaign of Outriders” way, but there was only so much you could glean from just over an hour of playtime. Outriders is a treasure in the late game, after you’ve found weapons you enjoy, and you have time to really dig into your class.

When you are forced into a team with others that are focused on pushing forward, you lose a lot of the nuances that make Outriders what it truly is. For that, the short preview wasn’t enough to whet an appetite, but it was barely enough to give many of us a glimpse of what’s to come. A new, powerful altered awaits, a world-ending catastrophe is creeping ever closer, and the, ever apathetic, protagonist (the player character) is ready, gun in hand, to take it on. I couldn’t imagine being more excited for what’s to come. Are you excited for Outriders: Worldslayer? Hit us up in the comments and tell us.