As New World opens its shores to shipwrecked adventurers this week, it can feel like a daunting task for new players to get started in Aeternum. From figuring out what faction to choose to which weapons to specialize in, there are a lot of options thrown at new players in the opening moments in Amazon’s MMO. Here are five ways to help get started down your path in Aeternum.

New World is, fundamentally, a game centered around its combat. From fighting corrupted enemies around an otherwise idyllic lake or taking on another player during an Outpost Rush, combat is at the core of what you’ll find yourself doing in New World. Understanding how combat works is key to success.

As with many new MMOs on the scene, New World is an action combat game that doesn’t rely on myriad skills to power through these moments. Instead you’ll mix light and heavy attacks all the while blocking and dodging your foe’s thrusts while waiting for an opening. It’s got a Dark Souls-feel as it’s a bit more reactive than say, ESO. However these initial attacks are only part of the equation. 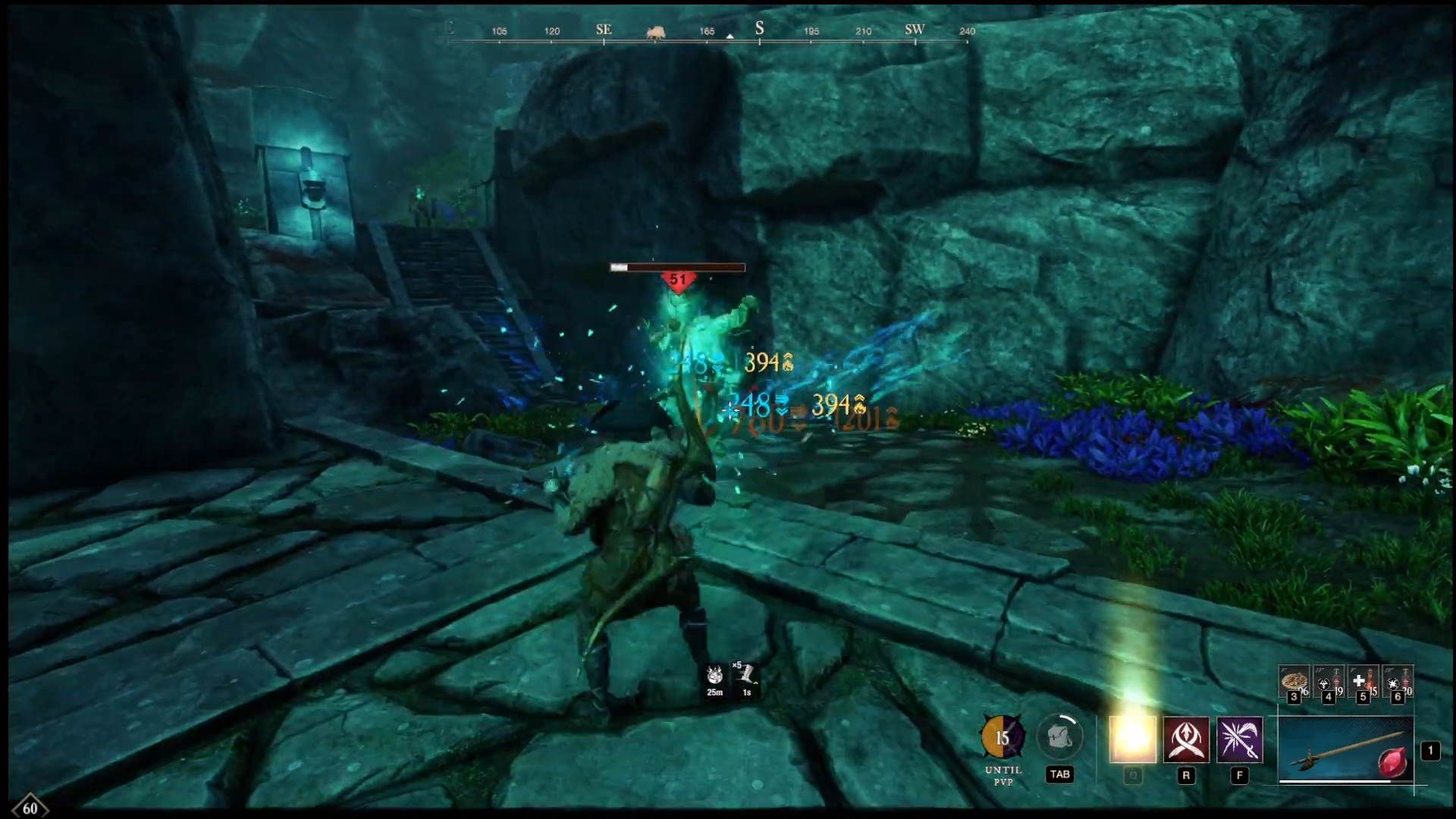 Throughout your journey in New World you’ll also spend your time leveling up weapon skills to fully kit your player. Since New world is class-less, which weapons you choose - as well as how you decide to play them - will define your role in a group. You can choose from the life-giving, aptly named Life Staff to heal your friends and damage foes, or if you’re the tanking type you can go all in on a great warhammer to swing around like you’re Ajax-reborn. How you choose to play is up to you.

To help unlock more weapons and armor, New World prioritizes its crafting. And it makes sense, considering New World’s survival game roots. Everywhere you look there are things you can gather, from tree branches, flint rocks to even the skins off the randomly generated boars that roam the forest. Even if you don’t fancy yourself a master crafter, gathering these materials early and often can be key to both working the economy and improving the various settlements around Aeternum. There are no NPC vendors in New World either, so the market will be wholly dictated on player supply and demand. Even if you decide not the venture into crafting much yourself, being able to gather materials for other crafters and sell them on the market will be key to earning gold in your journeys through Aeternum. 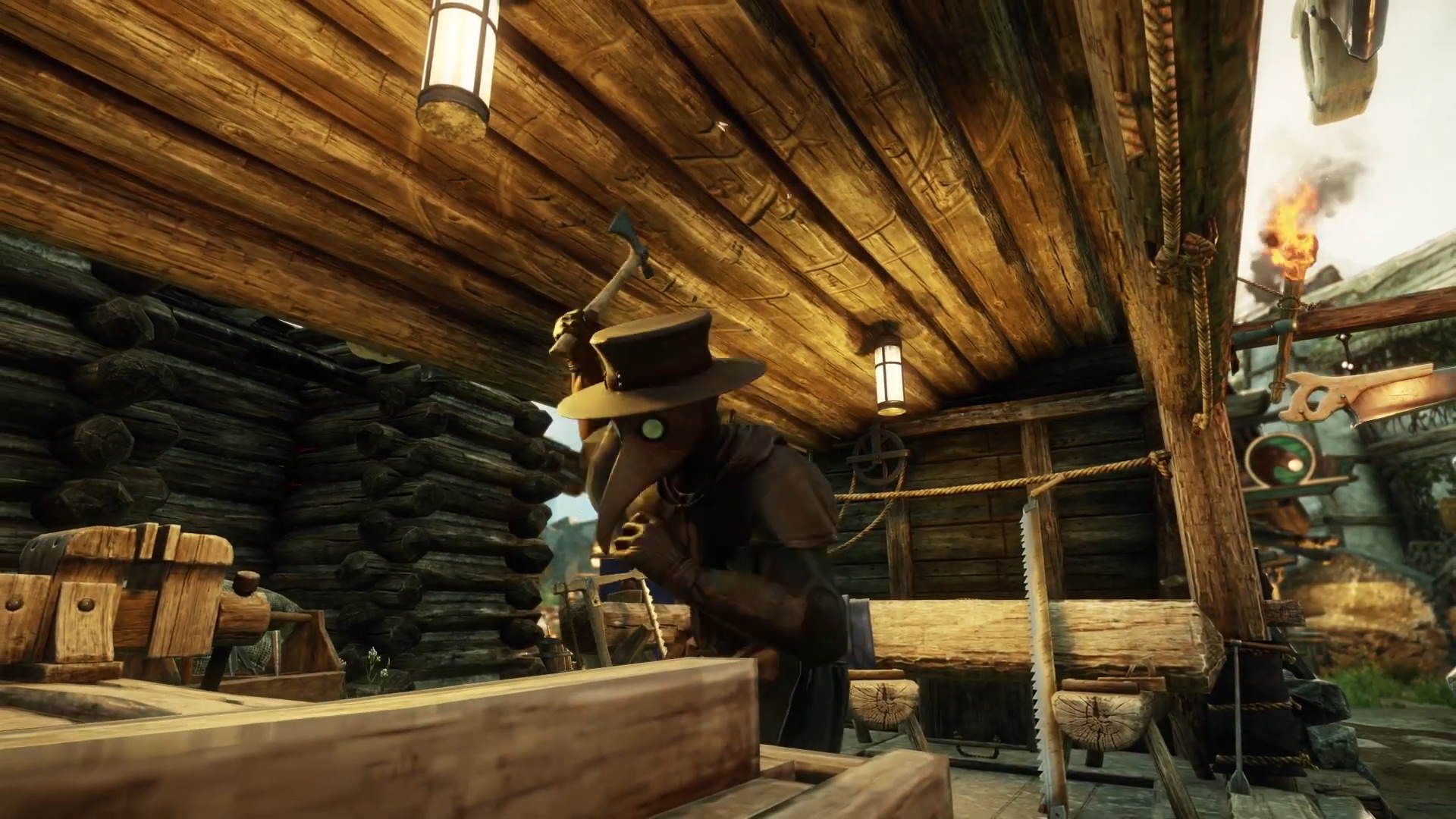 Many quests, especially town improvement board quests, have you gathering materials. And as with anything in New World, the more you do something, the better your character will become over time. Having a hard time finding an Iron Ore node? Don’t worry, eventually you’ll start to see them populate your compass as you level up your mining skill. Need one more turkey before you can turn in a quest? That too will start to appear, making it a bit easier to track as you progress in New World.

Exploration is key to surviving in New World. Unlike other MMOs there isn’t a transit system in Aeternum. For some reason Horses and other beasts of burden never survive the journey?As such you’ll spend much of your time running from settlement to settlement, quest marker to quest marker. Exploring New World will uncover secrets, such as fast travel spots throughout each region to make things a little faster for you if need be.

You’ll want to avail yourself of the services at an Inn in each major town, too, as it can be a fast way to get back and turn in all those tasks and quests you picked up previously. Additionally you can make a camp that acts as both a travel spot and respawn point, meaning if you meet your untimely end, you’re not having to trek all the way back from a settlement, simply pop back up off the bed roll and keep going.

New World is an open world PvP game at its core. The very fabric of how the settlements work is woven into the three-faction war that tears Aeternum apart which serves as the basis for its PvP system. And while world PvP will influence every aspect of New World from settlement taxation to which faction controls the most regions, Amazon smartly doesn’t force you to participate completely.

Before you leave a major settlement you’re able to toggle yourself for PvE or PvP. Setting PvE will limit some of the faction quests you can do, but you won’t need to worry about being ganked by a group of players while trying to hunt that last stag you need to turn in. However, if you like the challenge and want to get your hands dirty, you can turn PvP on, but the moment you leave the settlement you won’t be able to untoggle it till your back in the safety of its walls. Participating in PvP allows you to take part in game modes such as Outpost Rush or even the faction seiges that take place in each settlement once a faction has enough rep built up to challenge the ruling company.

PvP is intrinsically tied into New World’s DNA, but it isn’t required to enjoy yourself, still.

Each player will have a main scenario questline to go through once your journey starts in Aeternum, which will eventually unlock some of the more advanced mechanics and encounters in the game, including its dungeon Expeditions. However, these aren’t the only ways you can quest and make an impact both on your XP bar as well as the world around you.

Each settlement has a town board where you can pick up tasks to help improve the settlement itself. These can range from gathering 25 wood to help build an upgraded kitchen or procuring the meat from the various coneys around the region to help feed the populace. In addition to these town board quests, there are also a few NPCs in each town that can give you tasks to accomplish, from culling a farmstead of corrupted individuals to seeking out the riches hidden in an old ruin down the road.

Factions themselves also have their own set of quests you can accomplish, many of which will be repeatable. Factions have their tasks broken down for PvE and PvP, meaning if you’ve flagged for the latter, you’ll have more opportunity to level up your character (and boost faction rep in the region). 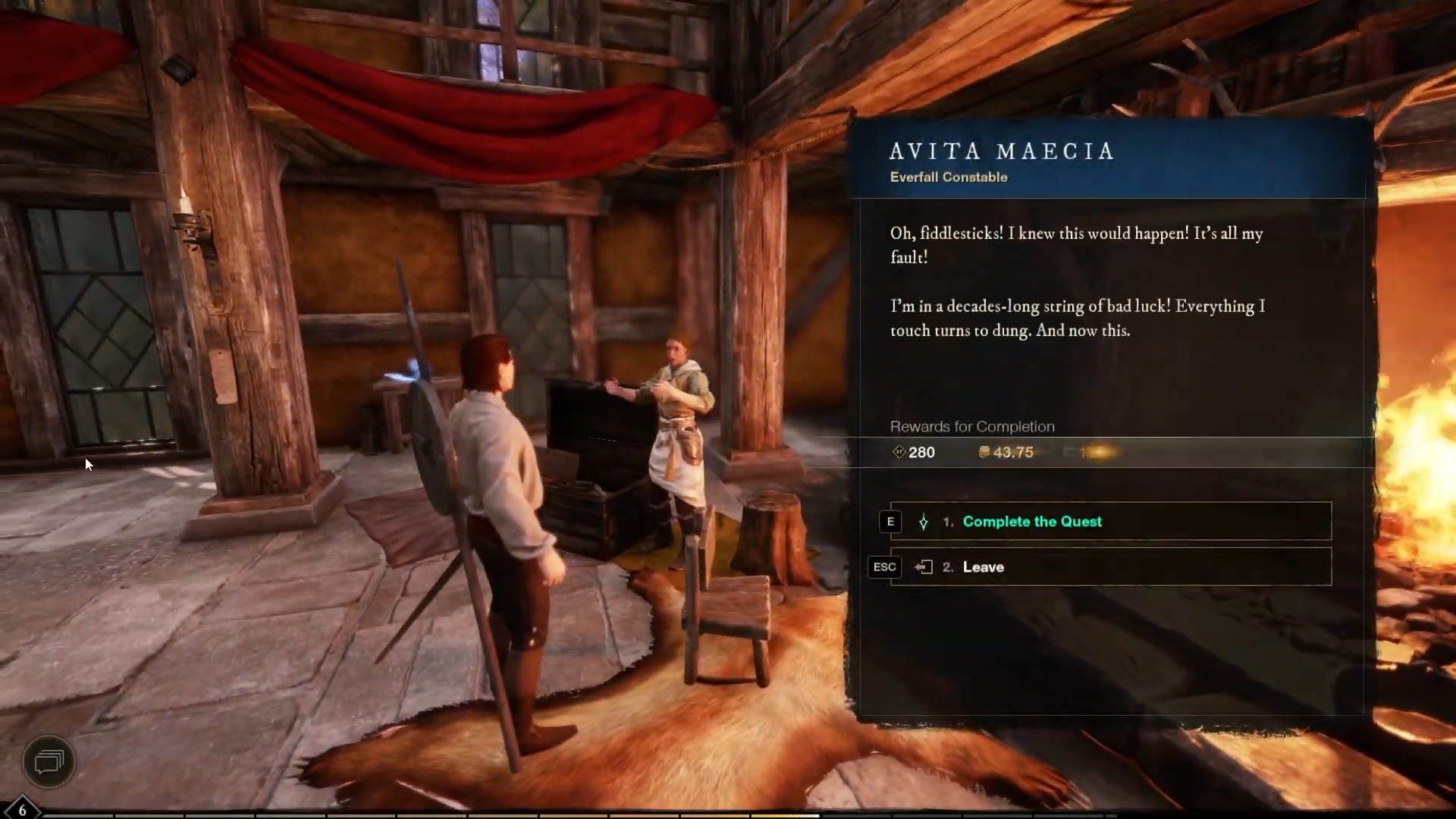 You’ll want to quest and quest often, not just for your own personal experience growth, but also to earn reputation within the region, which can confer bonuses as you quest there. These can include anything from increased XP gain to lowering the taxes on crafting in the settlement.

This list barely scratches the surface of what to do when you start up New world for the first time, as there are many possibilities and directions you could go the minute it stops holding your hand after landing on the shores of one of the various starting zones. How will you spend your first moments in Aeternum, and what advice would you give new players who find themselves shipwrecked on the Eternal Isle? Let us know in the comments.