Last week, I had the pleasure of attending a presentation of A Total War Saga: TROY (shortened to TROY) by developer Creative Assembly Sofia (shortened to Sofia) and their publisher Sega. After the presentation, I was able to get some hands-on time and experience some of the changes firsthand. In TROY, there are a lot of new mechanics and gameplay elements that have been tweaked in order to more realistically depict this historical period based on Homer’s The Iliad. Here’s everything I learned about A Total War Saga: TROY.

First, I just wanted to mention that A Total War Saga: TROY is Sofia’s first standalone game after being bought by Creative Assembly back in 2017.  Since then, they have worked on two DLCs for Total War: Rome II and this is the studio’s first opportunity to really stretch their legs and create something that they are passionate about. TROY will be the furthest back in time that any Total War game has been set in.

So what is A Total War Saga: TROY, and why isn’t it just called Total War: TROY? Sofia describes TROY as an “iconic conflict in a key flashpoint moment” meaning that they chose a singular specific battle – in this instance, Achilles versus Hector during the Trojan War. Sofia chose this time period because of it is rife with legends, heroes, and mythical monsters and because the developers themselves personally thought it would be an interesting point in history to explore.

As for what differentiates a Total War game from A Total War Saga game, the Saga game focuses on a particular period of time in history as opposed to spanning several different eras. This is only the second Saga game in the Total War franchise, the first of which was Thrones of Britannia that launched in 2018. It appears that Creative Assembly plans to start releasing these smaller Saga entries on off-years from the main games so as to provide more content more consistently.

In A Total War Saga: TROY, there will be a total of 8 playable factions as part of either the Greek or Trojan sides. Sofia is introducing several new systems that set TROY apart from other games in the Total War series, but only in a manner that reflect the conflict and the time period of the Trojan War. 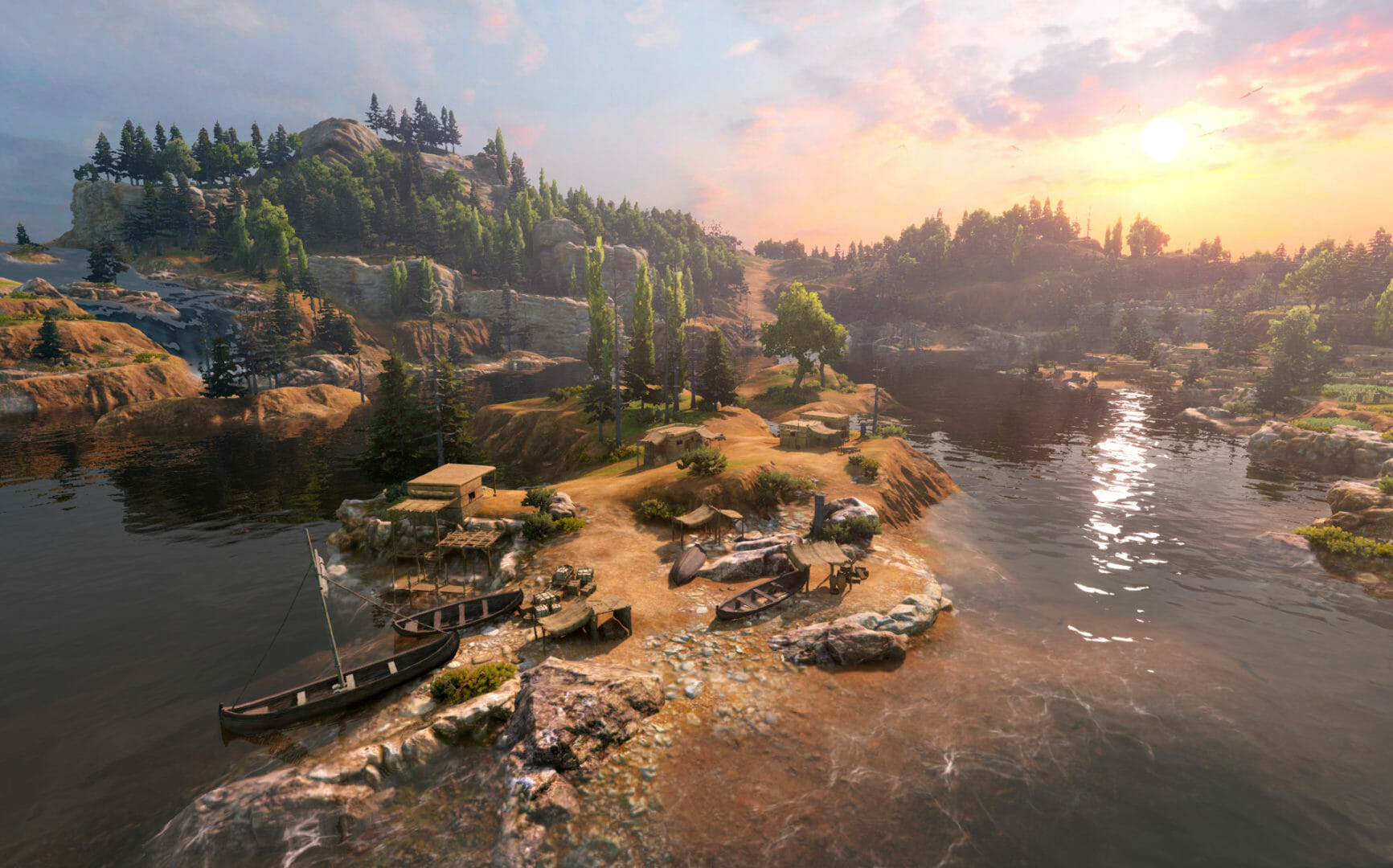 There is a new Multiple Resources Economy in TROY, unlike in previous games which only had one primary resource. These new resources are food, wood, stone, gold, and bronze and will be the building blocks of each faction’s economy. Sofia is also introducing a religion system called the Divine Will, where players affect the course of their faction by following different Gods within the Greek Pantheon. By dedicating the faction to a particular God, players will be able to receive benefits that are in line with that God’s beliefs. For example, a faction that worships Ares, the god of war, would naturally uphold the same values of their God – potentially increasing that faction’s effectiveness or prowess in combat. Sofia wasn’t ready to delve deeper into the Divine Will system or how it affects the campaign gameplay just yet, so we will have to wait for future announcements in the coming months.

Part of choosing this legendary time period was so that Sofia could “Discover the Truth Behind the Myth.” This is their way of holding up a magnifying glass to the mythical monsters and legends in The Iliad and coming up with imaginative ways to display them in historically grounded representations of what their true form may have been. They showed off two of these mythical units: the Minotaur and the Centaurs.

The Minotaur, which was sided with Hector during the presentation, was described as “a beastly warrior who wears a bull’s skull to intimate his foes.” In battle, the Minotaur was a slow-moving giant that towers over other units and, like the Hero units, stands as a single entity rather than as a group of units. He also has two unique battle abilities: the Bull Rush, which allows him to penetrate through the frontlines of enemies, and Savage Roar, that inflicts huge moral penalties to surrounded enemies.

The Centaurs were sided with Achilles during the battle, and are tribes of riders who appear as “one with their horses” and have a wild or untamed look to them. In battle, they are a mobile cavalry unit that can harass and easily flank enemies with ease. Unlike the Minotaur, the Centaurs do appear as a group of different units which makes it difficult to distinguish them from other cavalry units. They are capable of both charging at enemies as well as utilize deadly projectiles in order to keep enemies at a distance. 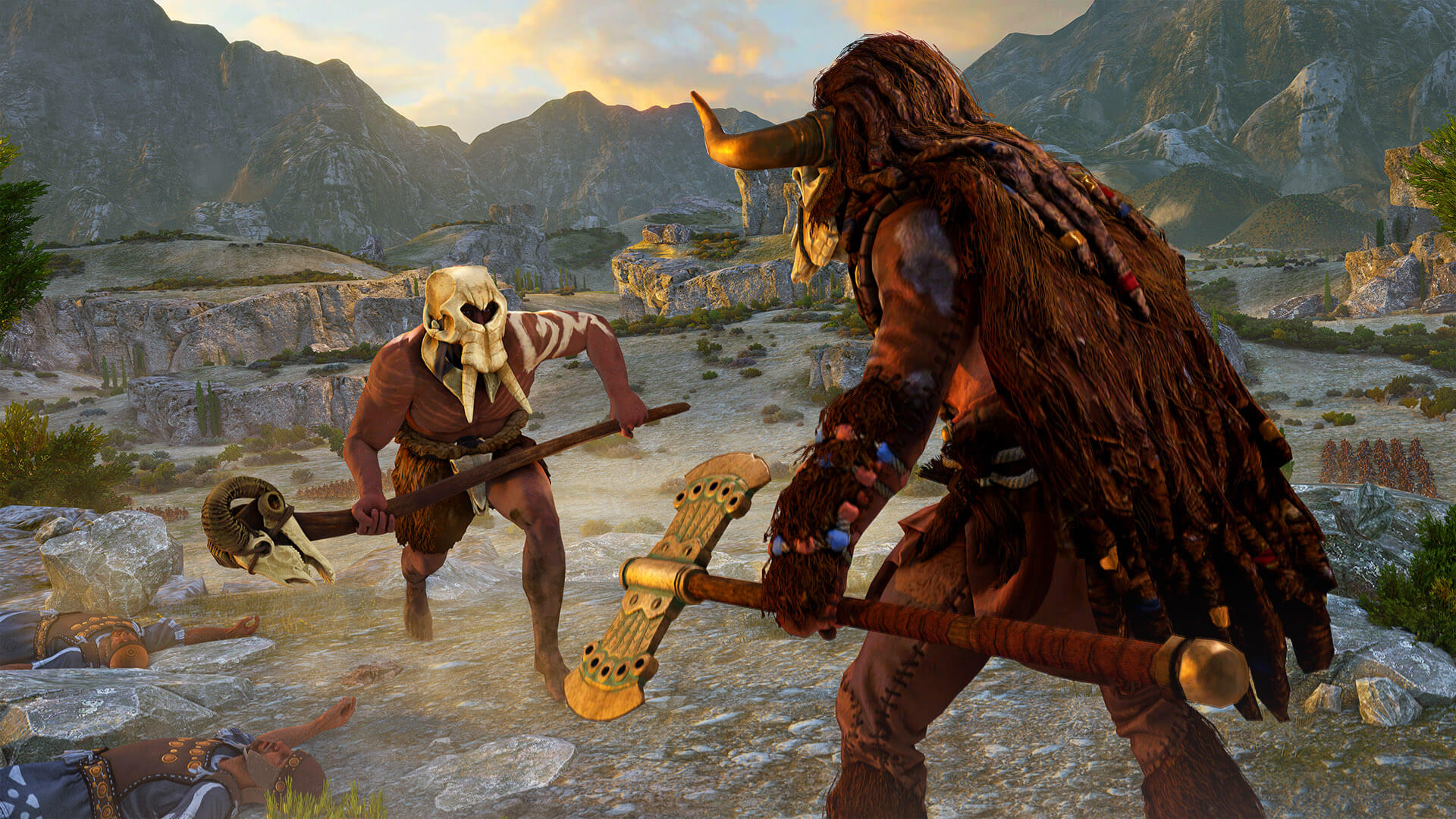 AN EMPHASIS ON INFANTRY

The Trojan War took place in the Bronze Era, which was historically an infantry-focused time period. Since Sofia wants to represent this conflict as historically accurate as possible, they have changed the way infantry units behave to create greater distinction between roles and to enable more diversity during combat. Heavy infantry for example is extremely durable and nearly impossible to defeat head-on, but they are slow and susceptible to flanking maneuvers as a result. The light infantry by contrast excels in flanking by being more than twice as fast as other units and thus can navigate the terrain more easily.

A unit’s class and role will contribute to defining their overall speed and mass, which will affect different aspects in battles. Speed is pretty self-explanatory and contributes to the effectiveness of a unit’s ability to flank, whereas mass will determine the effectiveness and impact on collisions with enemy units. There are even more additional attributes that will create greater distinction between units as well. These attributes will give bonuses against certain classes of infantry, like giving resistances against particular weapon types or even providing immunity against flanking.

The Heroes in TROY are similarly divided into four categories. Fighters, like Achilles, are lightly armor assault warriors with the best combat abilities for melee. Defenders, like Hector, are slow, heavily armor units that offer defensive buffs to their troops in order to hold the line. Warlords are utility buffers, which are not as good in a melee scrap but offer a wide range of campaign bonuses. Lastly, Archers are ranged heroes that are useful for damaging units and sniping at other heroes.

Heroes also have two meters that can fill up during battle. Rage is fueled by dealing damage and can be spent in order to use battle abilities. Achilles, as an example, has a unique battle ability that allows him to gain Rage passively by just simply being on the battlefield. As Heroes use their battle abilities, they will fill an Aristeia meter – when full, it can be activated making them invulnerable.

To allow for even more dynamic conflicts, A Total War Saga: TROY introduces three new terrain types that can greatly alter the course of a battle if used strategically. ‘Sand’ slightly reduces the movement speed of all units, so one of the ways that it can be used is by utilizing ranged units like Javalin throwers in front of the sand forcing enemy units to either wade through it or take a detour around it. ‘Mud’ reduces the movement, turn, and charge speed even more significantly than sand. An example they gave was using the mud to slow the advancement of an elite heavy unit so that your faster units can perform flanking maneuvers against them. Lastly, the ‘Long Grass’ terrain gives some units the ability to hide or move through it sight unseen. This can best be used by ranged units like the juggling ambushers who are able to attack other infantry while remaining out of sight. 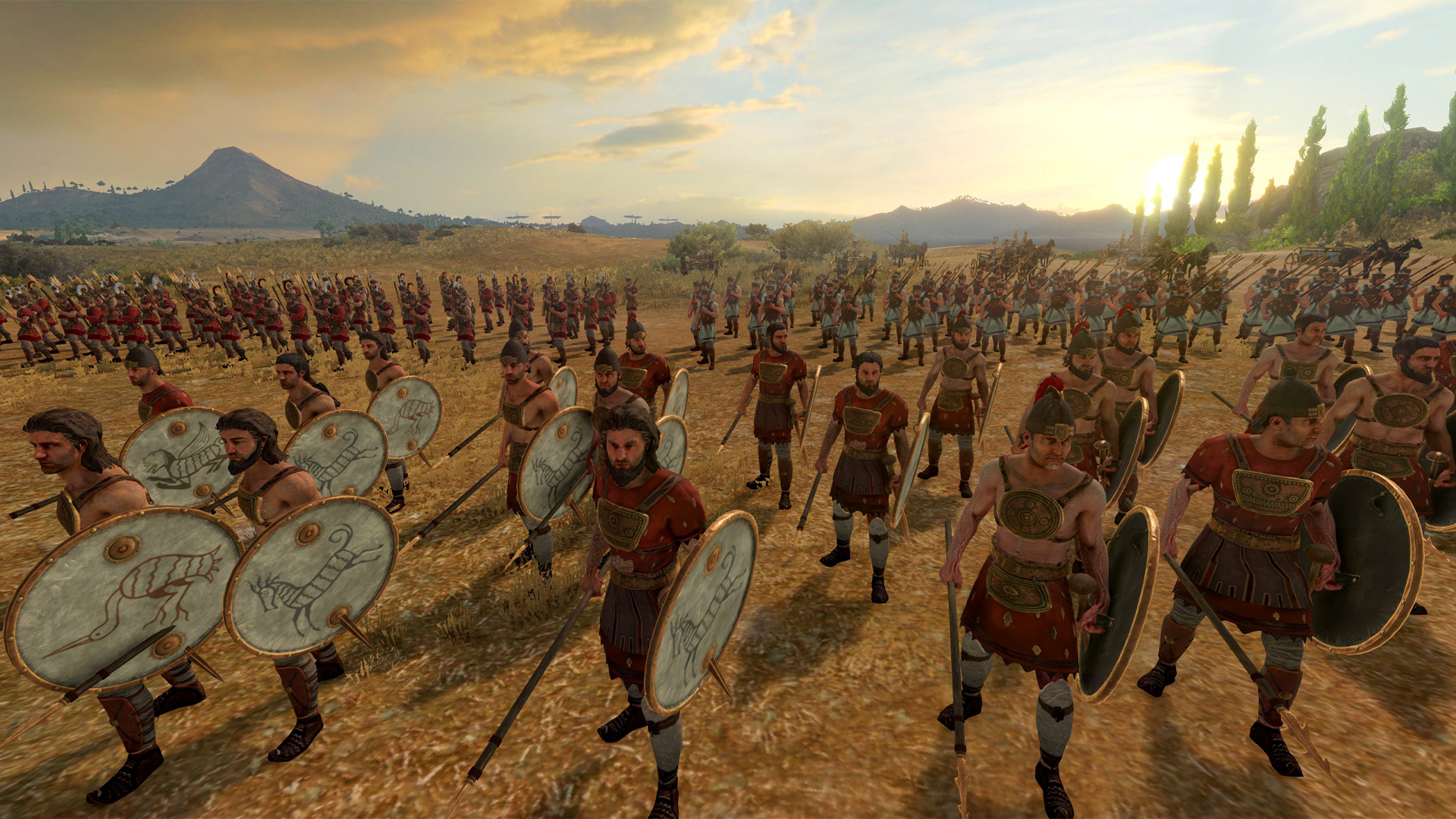 We will have more details about A Total War Saga: TROY in the coming months before its official launch on August 13. It was recently announced that TROY will be free for 24 hours when it launches for PC on the Epic Game Store. For more on TROY, check out our impressions of the gameplay from the preview and stay tuned later this week for my interview with Senior Game Designer Milcho Vasilev from Creative Assembly Sofia.