The Waylanders is a classic party-based RPG similar to high-profile titles like Dragon Age: Origins, and inspired by CRPGs such as Pillars of Eternity and Baldur’s Gate. It just recently went into Early Access on Steam on June 16, but developer Gato Studios notes that it is very much in an Alpha stage right now. I’ve been able to go hands-on with The Waylanders during this Early Access period and have spent roughly a dozen hours exploring the world of Galicia. So is this the next great RPG of our times, or should you hold off on The Waylanders? Here’s our thoughts.

The character creation is basic, but offers good-enough customization for an Alpha. Currently, there are 4 races, 6 classes, and 8 backgrounds to choose from. Besides Humans, the other races include the beastly Werewolves, the matriarchal Moures, and the grotesque Fomori. I don't like that there weren’t the typical fantasy races, like Elves and Dwarves, to choose from. I appreciate that The Waylanders is going for something new, but it just feels like a significant miss. 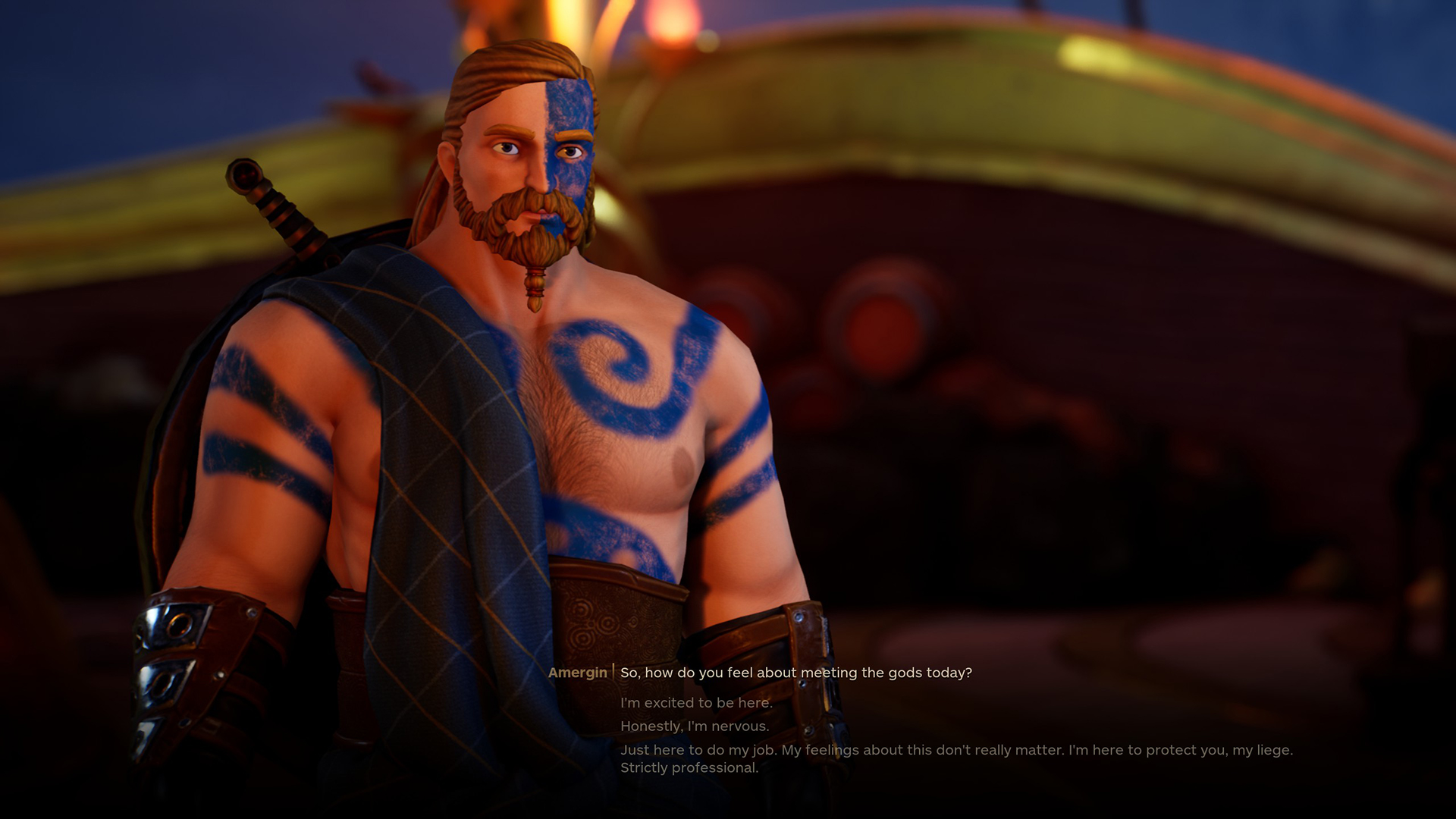 The face of a hero! It looks remarkably deadpan.

An aspect of the character creation I like is the Backgrounds, which reminds me a lot of Dragon Age and their origin stories. Unfortunately, The Waylanders’ backgrounds for the characters don’t seem to influence the story at all – and you will have the exact same start regardless. I look at the Backgrounds feature as a way to add even more diversity to characters, but right now it feels extremely limited. The humans have half of the total backgrounds, which include Egyptian and Roman, but the other three races only have one background each. There’s even a background without any affiliation, at least that I have yet to discover.

Starting into the game, there’s a good length of dialogue going on between a King and one of his advisors. Shortly, my character got introduced and I was presented with some dialogue choices of my own. This is probably the most polished part of The Waylanders because at least the voice-over mostly matches up with the on-screen captions, and their mouths are actually moving. Unfortunately, the protagonist doesn't have a voice at all and, worse-yet, has a deadpan stare the entire time. I don't like this design choice to have a silent protagonist; especially when everyone else is a Chatty Cathy. 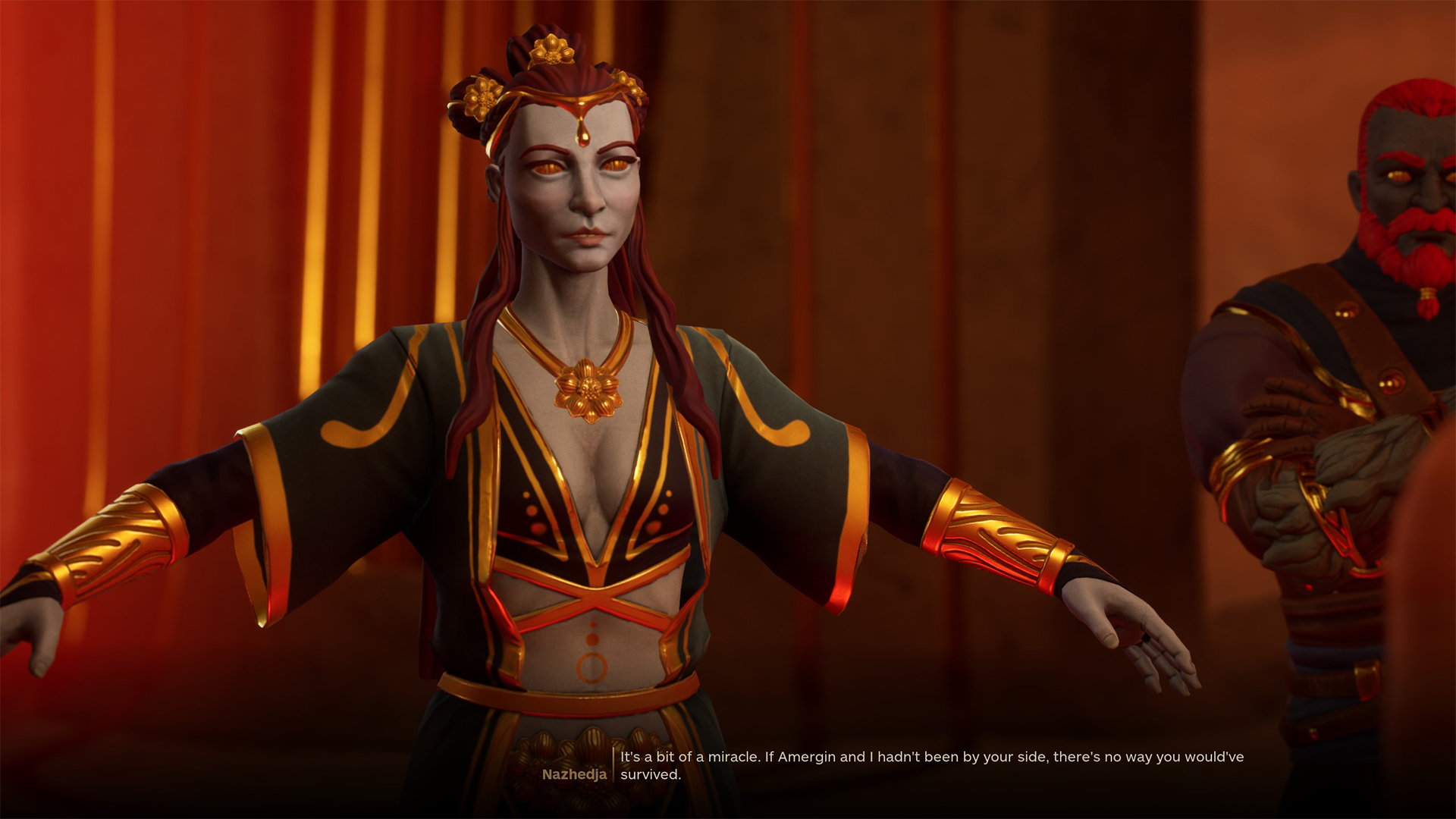 She was stuck in this T-pose both before and after this dialogue exchange.

So many my interactions throughout The Waylanders either weren’t voiced or didn’t have working animations. There was even one case where someone I was talking to was stuck in a T-pose the entire time. After one grueling battle in particular, a bug prevented any of the NPCs that were talking to even show up on-screen. I was just reading their dialogue via subtitles while the camera stared at an out-of-focus background. There are also several important story cutscenes that are just entirely missing.

The beginning of The Waylanders was especially tumultuous because I had no idea what was going on. It felt like I did something wrong that caused these events not to play, when in reality they just aren't implemented yet. I restarted the beginning of The Waylanders several times because I thought, "Surely, I've just made a mistake - these important cutscenes have got to be there and I'm just accidentally skipping them!" An Early Access title should never make a player feel like they've messed up, but this one does exactly that. Now, at least, it does appear that a message pops up before The Waylanders gets to the main menu that warns players of missing cutscenes.

Oo, Spooky Bird. What does it mean? I don't know; the cutscene was missing.

The combat in The Waylanders feels very similar to Dragon Age: Inquisition, but lacks a lot of the polish one expects. You can actively control any member of your party but there's almost no reason to unless your character dies. The AI is sufficient enough to utilize skills so there's little point in switching around to activate them yourself, unless you just really like to micro-manage your party. The difficulty of the enemies doesn't necessitate that kind of management, but the combat is set up like Dragon Age or Baldur's Gate in that you can pause combat whenever you like.

You can pause time with the Spacebar to tactically plan your party's moves. You can even change the perspective from third-person to more of a top-down view. I liked playing Dragon Age in this same top-down view, but it just doesn't feel right in The Waylanders. I think the pacing of combat is too quick to take advantage of any strategic elements that other CRPG utilizes, like tactical viewpoints or pausing time during combat. It's easier to just wade into a group of enemies than it is to try and carefully plan how to engage them. Maybe if The Waylanders adds new difficulty options like its contemporaries then it would add value or purpose to its tactical systems. 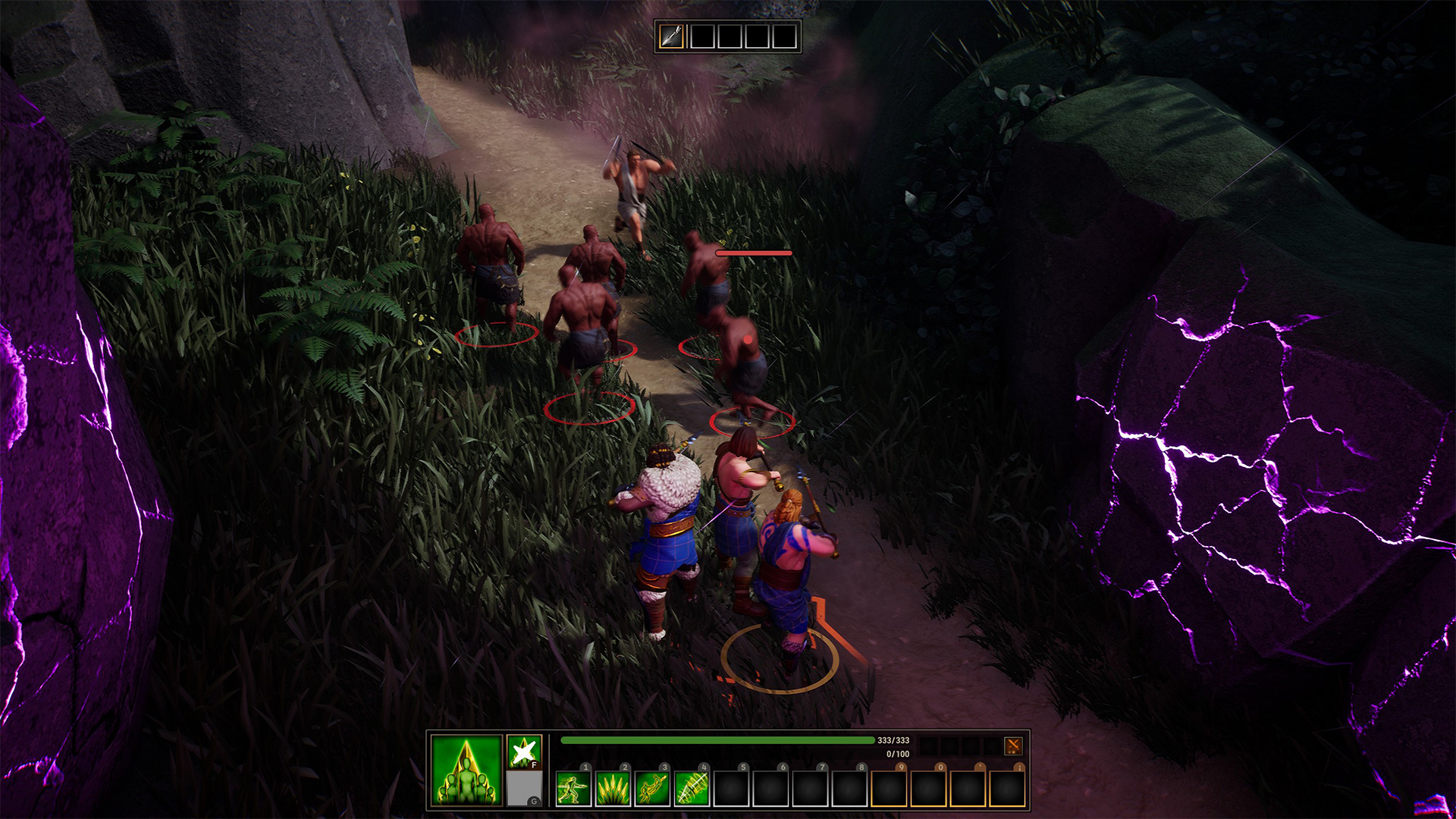 There is a new mechanic that The Waylanders introduces called"formations." In these formations, party members can band together to create a powerful single unit, like turning into a phalanx. Although these formations are often extremely powerful, I don't feel like the sacrifice of turning my independent members into a slow-moving unit like the phalanx is worth it. I'd rather have a diverse party that can adapt to different situations on the fly, and can engage with multiple enemies at once. Right now, each class type has one kind of formation available, but it looks like more will be added later. I'm interested to see these formations being utilized in more dynamic and strategic ways in the future, but for now it just feels like its only half-implemented.

The world of Galicia is heavily influenced by Celtic folklore and a Medieval era setting, with a healthy dose of fantasy mixed in for good measure. There are goblins, druids, werewolves, cannibals, cyclops, immortals, Gods, and more all inhabiting the world. The Celtic influences are prevalent right from the get-go, with many of the human characters appearing like highlanders, or extras out of Braveheart. I like the mix of fantasy and Medieval which makes the world feel more lifelike and relatable. 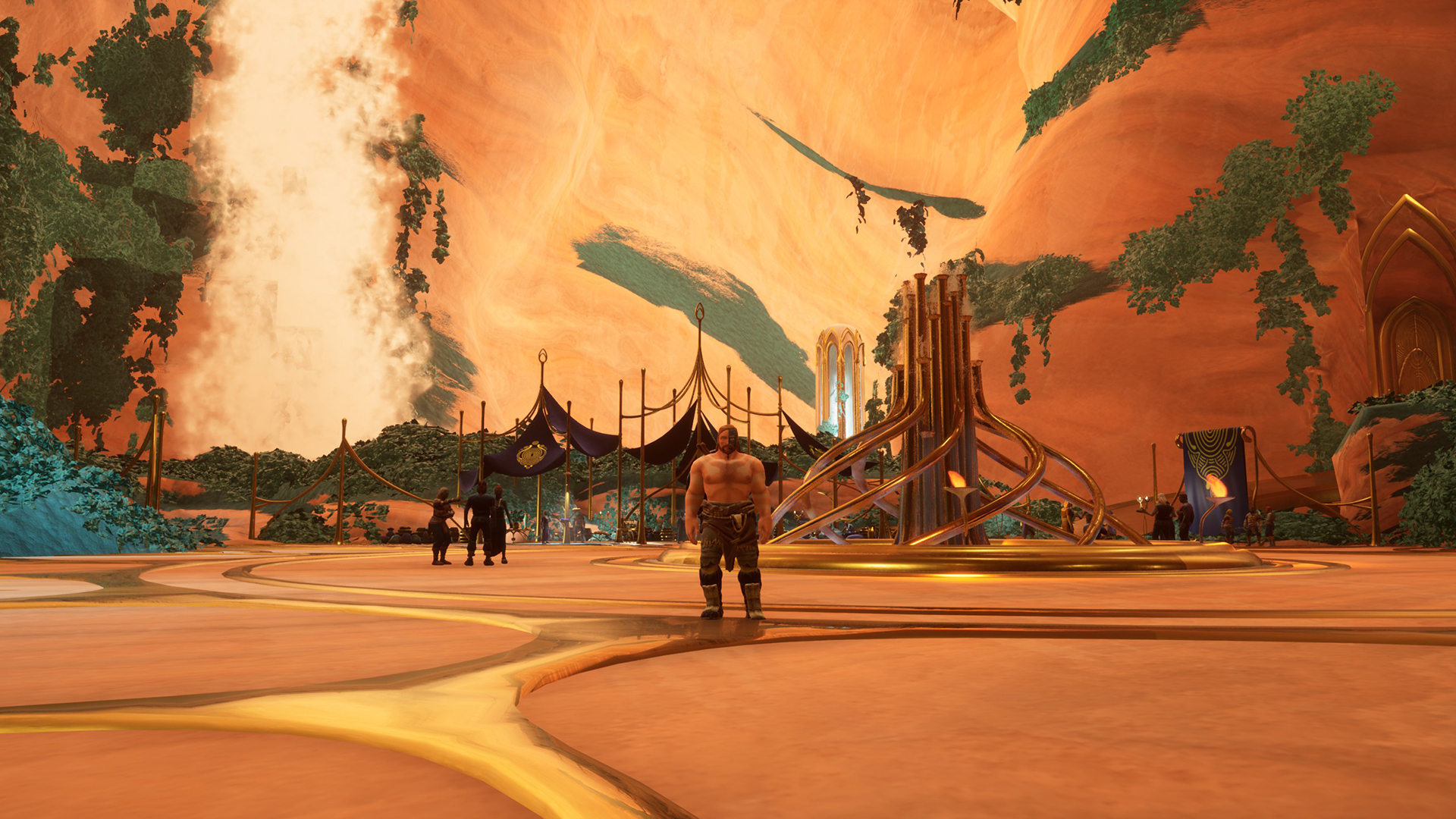 The first hub city in The Waylanders which is surprisingly devoid of much life.

That said, I was disappointed that certain areas, like in towns and cities, don't appear more lived-in. There's a lack of random NPCs to chat up, and there isn't much to do aside from the odd vendor. There wasn't much to explore, and most areas - cities especially - are linear in nature. I never really felt rewarded for exploring off the beaten path, though I did occasionally stumble upon some treasure stashed away indiscreetly.

I'm reminded of the old saying, "show, don't tell" when it comes to environments. There's little to no environmental storytelling throughout The Waylanders, and instead everything lore-related is spoon fed to you through dialogue. For example, before I met the Prince who holds a prominent role in the story, I had to hear from everyone first how much they disliked him. I wish the Prince's character was on display first so that I could judge for myself rather than be influenced by those around me. Naturally, when I met the Prince, I initially disliked him too. But his actions afterwards never belayed the negative remarks that the others prefaced him with. 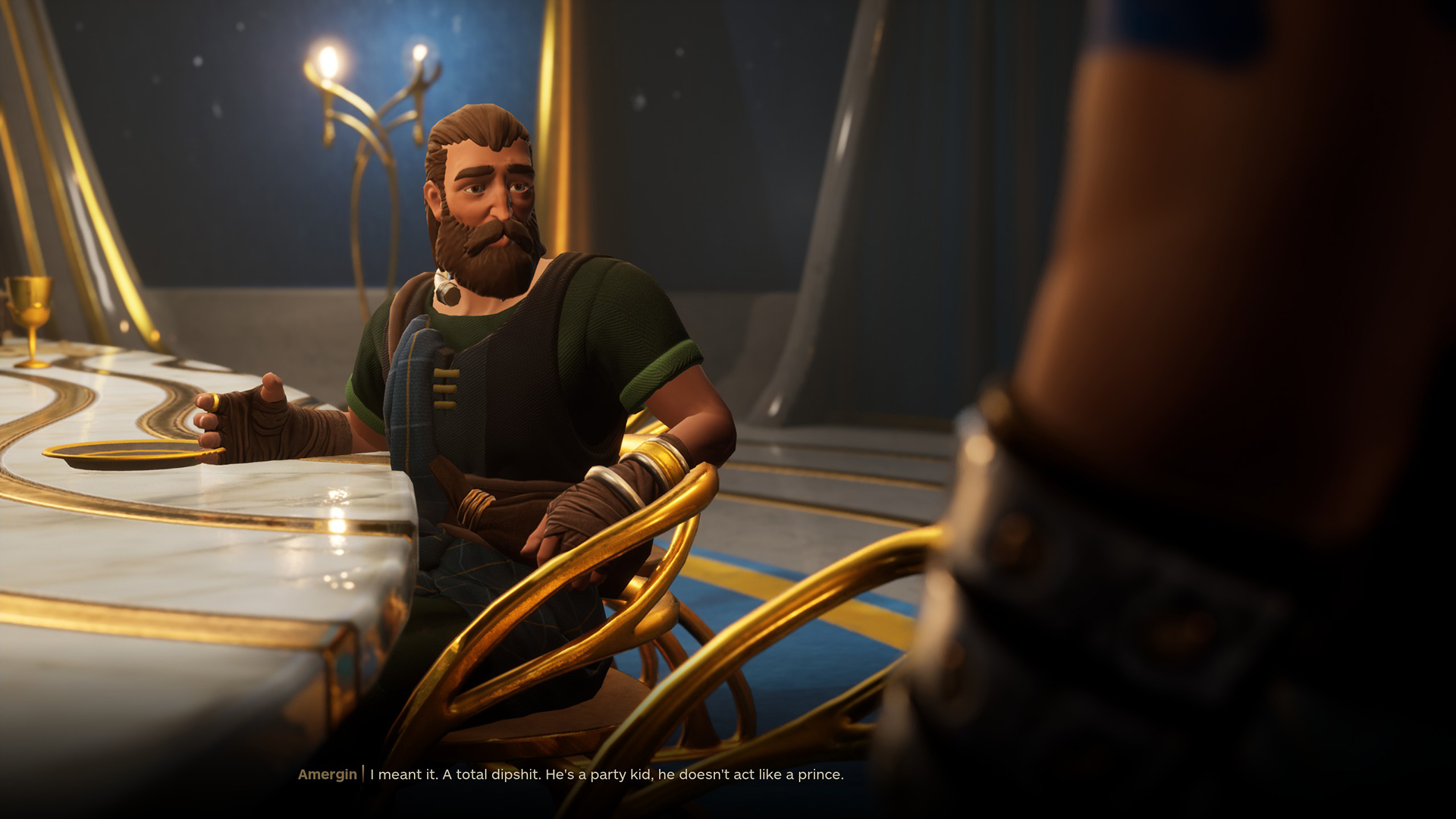 LOOKING TO THE FUTURE

Since Early Access started, there have already been a couple of updates to improve a number of features. This bodes well for The Waylanders during this period of development, but I think players will have to realize that it is a long and bumpy road to being finished. There have been a couple of new tutorials added to the beginning, as well as a new area called the Nettle Cavern which allows players to test different combat formations, abilities, party compositions, and more. It doesn't provide experience points or gold, so it can't be used for farming, but at least the enemies will respawn which they don't in every other area.

There has been support added for 21:9 type monitors, which I appreciate since that's what I use, and there have been some major progression-related bugs fixed. Unfortunately, there are a lot of basic display settings missing; you can change the resolution, but it doesn't appear to do anything. You can't change the screen size, nor can you choose between Windowed or Fullscreen modes. Some of these large updates may completely erase save data - like it did for mine. I definitely felt like a beta tester (or alpha tester, in this case) because of that. I don't think The Waylanders was ready to hit Early Access, and the development team would have gotten better quality QA from a small group of closed-Alpha participants than by opening up the floodgates.

Unfortunately, based on what I’ve played so far, I think The Waylanders may have more ambition than it will ever be capable of delivering on. From an overview, let me just say ‘Buyer Beware’ because there is a lot of missing content, animations not being fully implemented, missing dialogue, poor optimization, and the rare (but present) game-crashing bug. I’ve even had my entire saved filed wiped after several hours of progress. The amount of Early Access content in The Waylanders totals up to about 10 hours, which isn't worth it for the $34.99 price of admission. If you loved Dragon Age: Origins and are itching for something - anything - while you wait for Dragon Age 4, then you might enjoy this. For everyone else, I would highly suggest staying away until it hits a Beta milestone.