The first Cyberpunk 2077 gameplay was revealed in 2018 giving us a 48 minute glimpse of CD Projekt RED’s next game. Now, more than two years later, the final version has released packed to the gills with next generation PC technologies like ray tracing. Just how transformative is it?

Well, it should be noted that the preview trailers and gameplay videos for Cyberpunk 2077 vastly undersold the visuals. This makes sense because those videos largely excluded ray tracing. But I was surprised by just how much better the final game looks compared to those trailers.

Cyberpunk 2077 is a game which simply isn’t made for lesser machines, and I find this to be a great thing. Only by leaving behind the old can true progress be achieved. Cyberpunk 2077 pushes the best hardware today, the PC, to its absolute limit. And I am all there for it.

This was borne out when my 2080 Ti struggled to maintain 30fps in spots where all the ray tracing effects came to a head. This is the first game where I felt my 2080 Ti was truly last gen. Thankfully, Nvidia stepped in and sent me an RTX 3080 Founders Edition for purposes of this analysis. Immediately, I could sense a difference. Here’s a huge “thank you” to them.

In those spots where I saw my 2080 Ti scrape by with 26fps with all RT enabled, this 3080 maintains a solid 45fps – a scarcely believable 73% improvement over last generation’s flagship. More often than not, I’m in the 50fps range with all settings maxed and all RT enabled, including Psycho RT Lighting, while running DLSS Performance at my 4K display resolution. All of this combined unequivocally creates the single best looking game I have ever seen.

This is Cyberpunk 2077: Ray Tracing Unleashed.

We will take a look at these techniques, showing the visual effect each setting brings to the image. Let’s first start with RT reflections. Cyberpunk 2077 leverages screen space reflections which do an adequate job creating reflections. However, SSR has its limits when certain objects occlude the reflections of other objects. Outside Lizzie’s Bar, for example, you’ll notice that while the SSR is good, it’s still inaccurate. 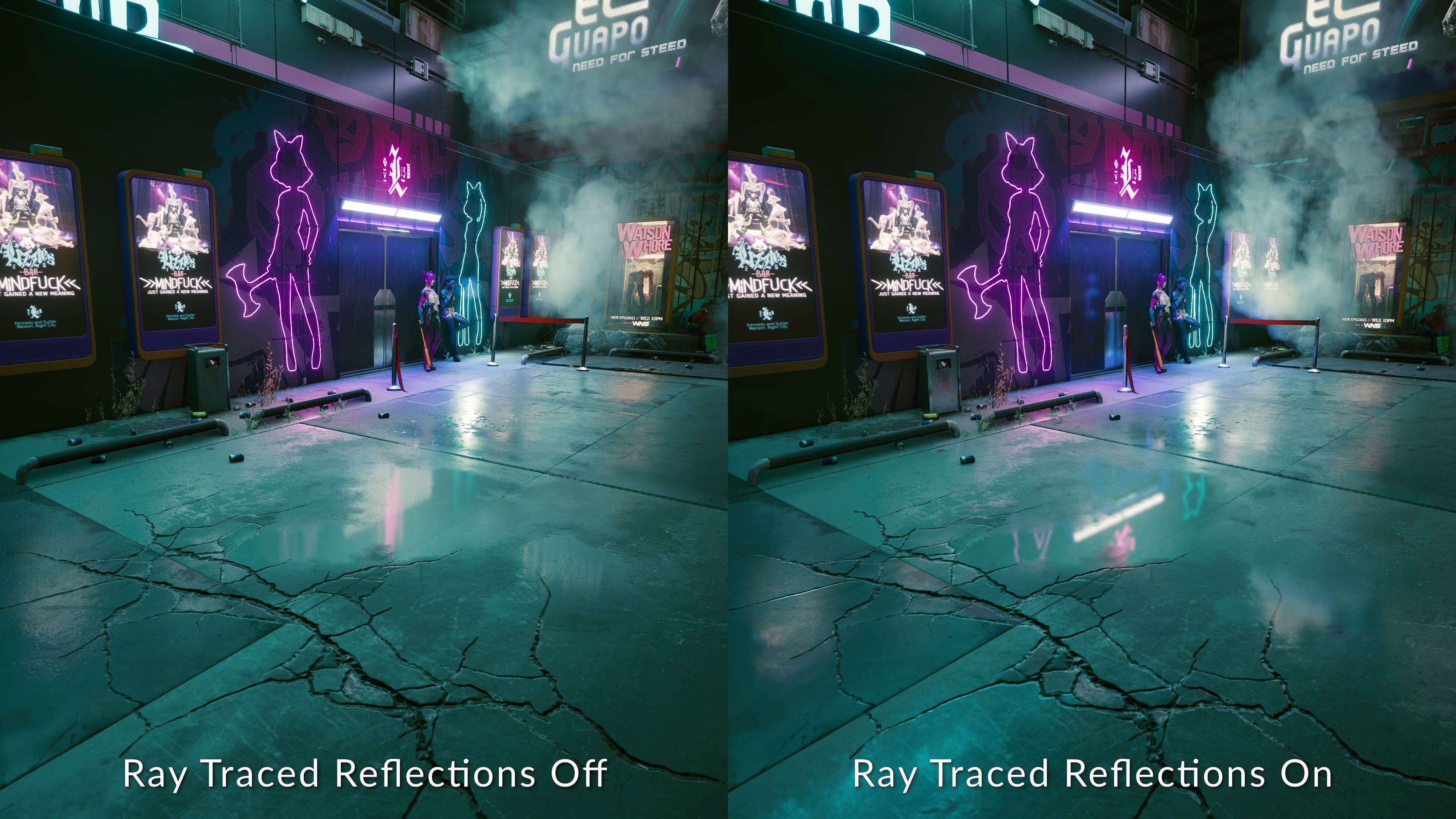 With RT reflections, these issues are resolved. Objects are reflected properly taking into account the roughness of the PBR materials at hand. In full effect, it looks stunning. However, there are limitations here. You’ll note smoke – a post process I assume – culled from the reflections when no longer in screen space. This, I suspect, is simply a concession rather than a bug. Additionally, the player character is not included in the BVH structure. The effect of RT reflections is nonetheless stunning, especially in the rain. The neon signage of Night City come to life with RT reflections.

PBR materials, or physically based rendered materials, are nothing new to games. In short, PBR materials allow objects take on the real-life physical properties after which they are modeled. But without ray traced lighting, the true power and effect of PBR materials can only go so far. We saw this in Metro Exodus which employed RT GI to great success. This returns with a force in Cyberpunk 2077. 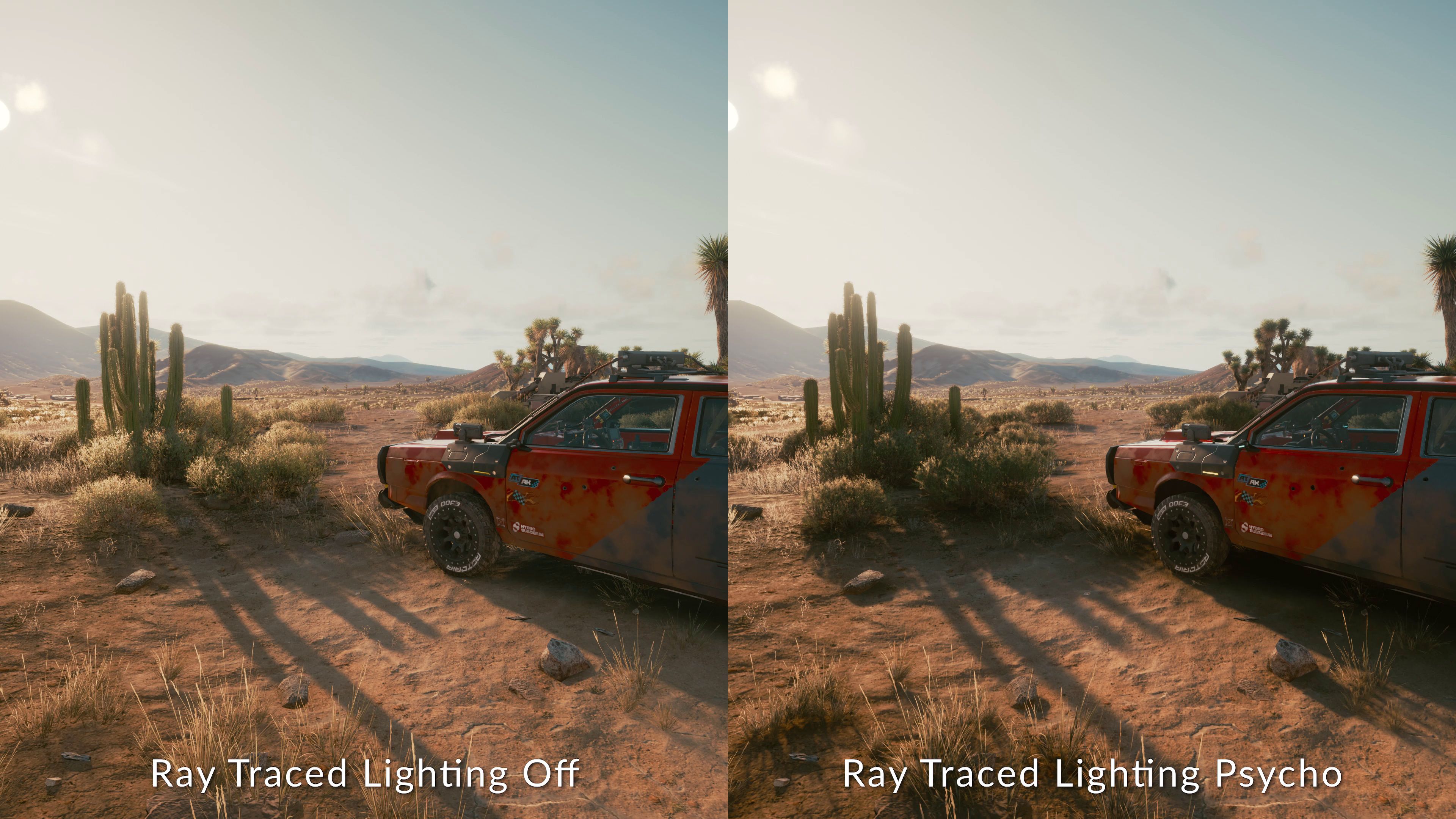 Take a look at the example above. With RT lighting off, the image looks perfectly fine in that very video game way we’ve come to expect. But with RT lighting enabled, the sand suddenly looks like real sand. I can almost reach out and run my hand through it and feel its coarseness. The same can be said of the car. It suddenly looks correct.

At this setting, the engine introduces a single bounce from the sun which maintains the color properties and proper absorption of various materials in the world. This is why the car takes on a golden hue from the color bounced from the sand.

We can look at another example where the rasterized probed lighting reaches its limits. We can see here that the barrier and bench occlude the sunlight. However, when we enable RT lighting at Psycho, suddenly we see the orange hue from the back of the bench illuminate the barrier as its color is bounced. 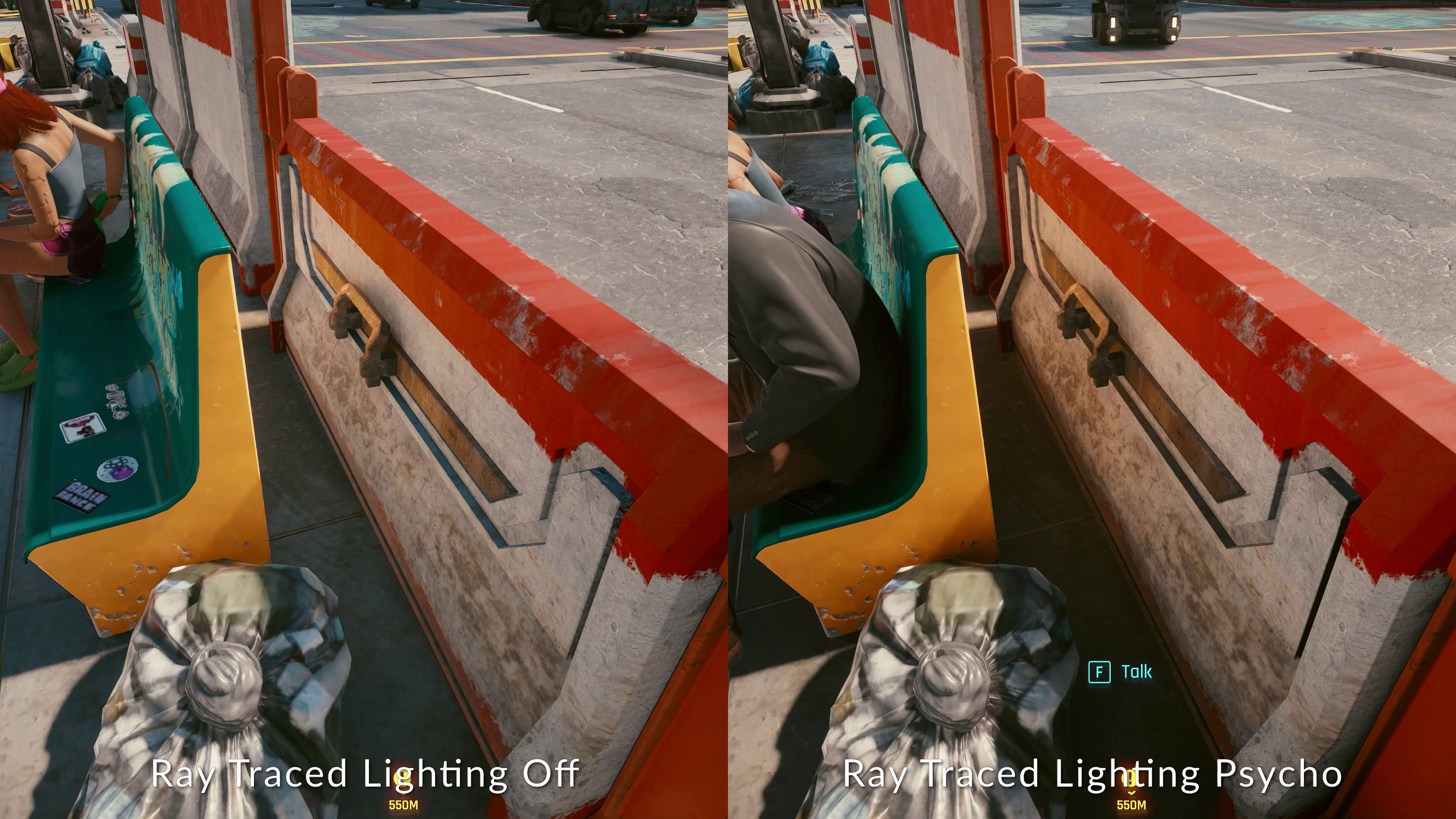 RT lighting also enables proper ambient occlusion eliminating that “glow” we often come to expect in rasterized games. Here, we can see the space between these two porta potties (lol) artificially lit. It doesn’t look right, yet this is what we’ve become accustomed to in games. Enabling RT lighting sees the proper occlusion of light between them, now appearing shadowed and far more realistic. 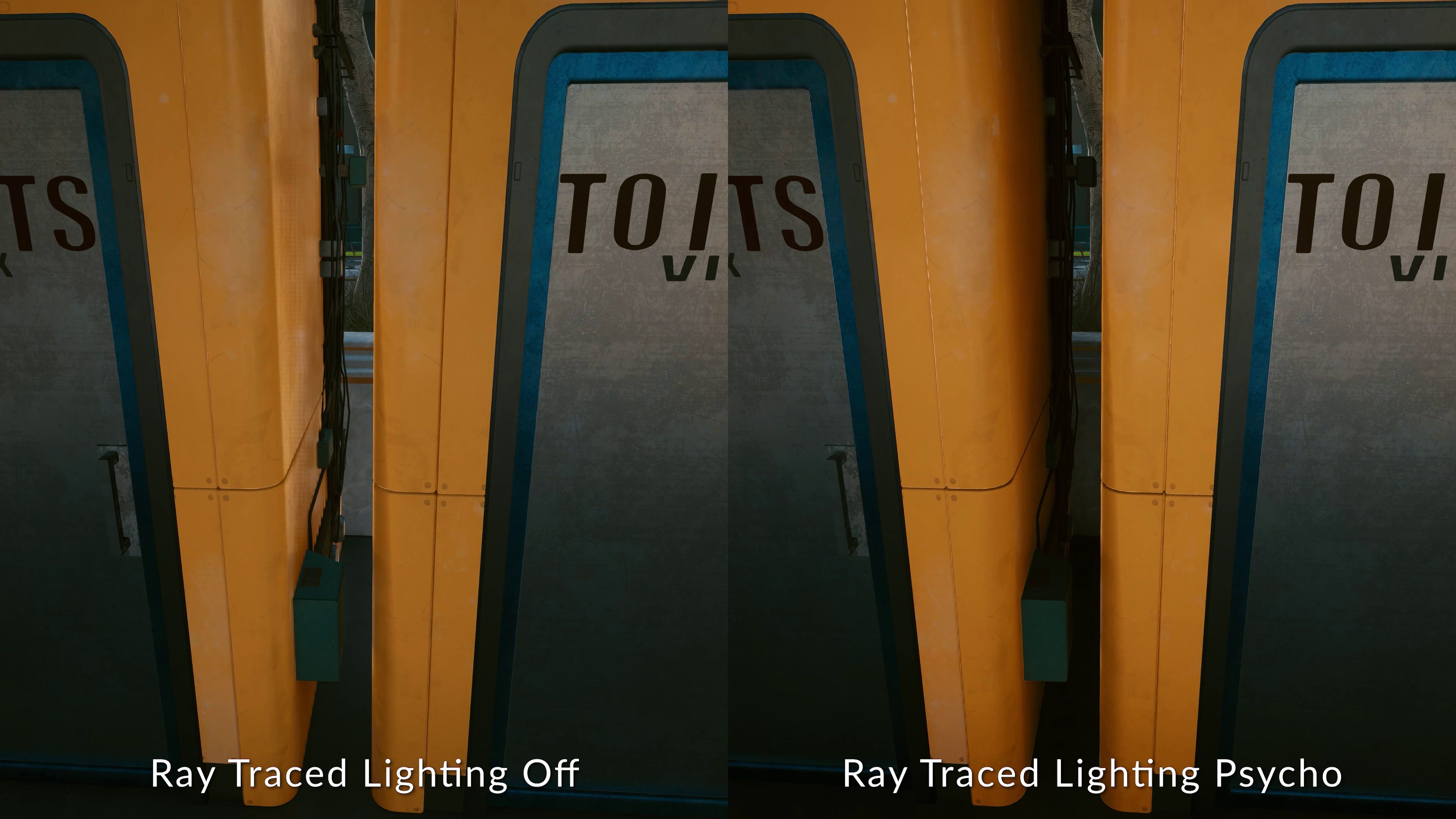 The final RT lighting effect is diffuse lighting. This affects any of the neon signs or other such emissives in the world. It also turns the sky into one giant area light. We can see the effect of this diffuse illumination in this scene here with these bright neon vending machines. With RT lighting off, the scene appears unnaturally flat with only a few point lights artificially simulating the lights from the neon. 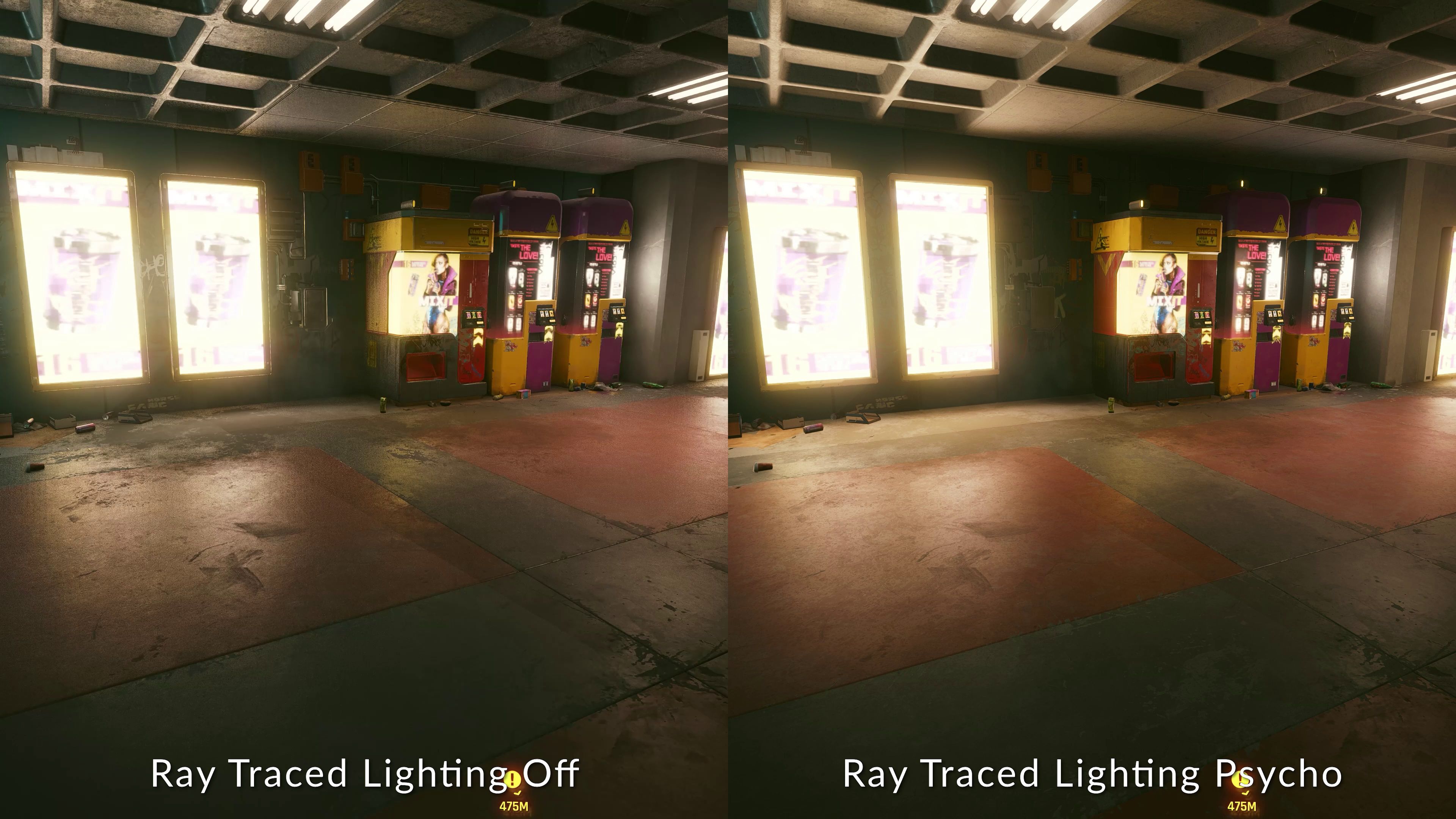 With RT lighting enabled, the scene suddenly comes to life. We see the light from the vending machines properly casting their yellow light in an area correctly illuminating the scene. Moreover, correct shadowing and occlusion are applied to the area directly above the vending machines to the right. The room as a whole takes on a realistic yellow glow.

The sky lighting is another area where diffuse lighting comes into play. Take a look at the underside of this stall and note how it appears unnaturally evenly lit. The stall looks to float unnaturally above the ground which itself appears evenly lit. Overall, it looks quite flat but this is what we’ve been accustomed to seeing in games. 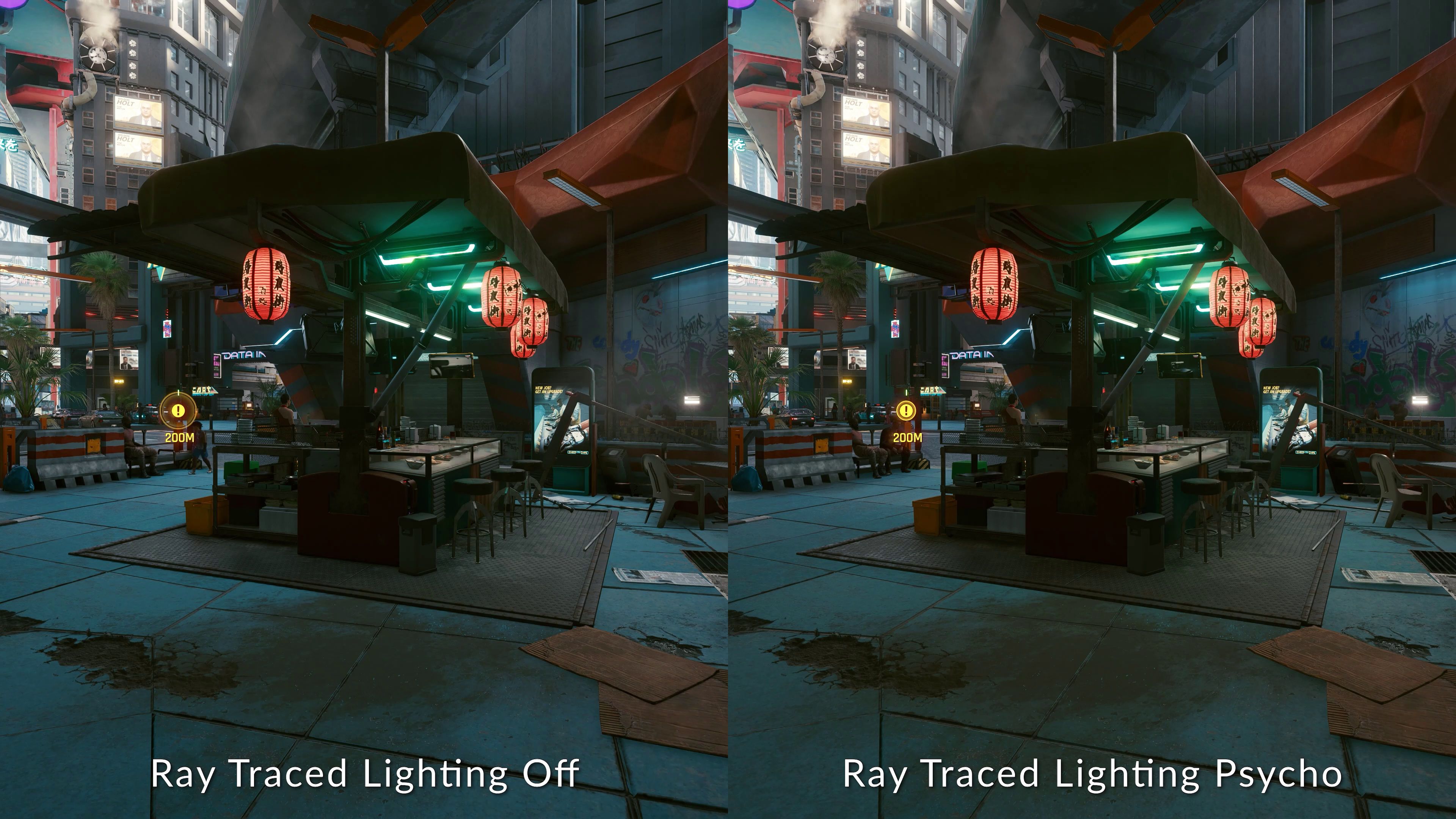 With RT lighting enabled, we see how the diffuse lighting completely changes the scene. The underside of this stall no longer appears evenly lit. Rather, we see pockets of shadow created by both the sky light above and the green neon and red lanterns. Indeed, we can see the underside of the stall take on a reddish hue from one of these lanterns. Additionally, the stall no longer appears to float, rather looks and feels firmly attached to the ground.

All this comes to a head when volumetric fog is thrown into the mix. The fog properly diffuses the light and creates a far more dramatic scene, greatly adding to the atmosphere and overall mood. Take a look. 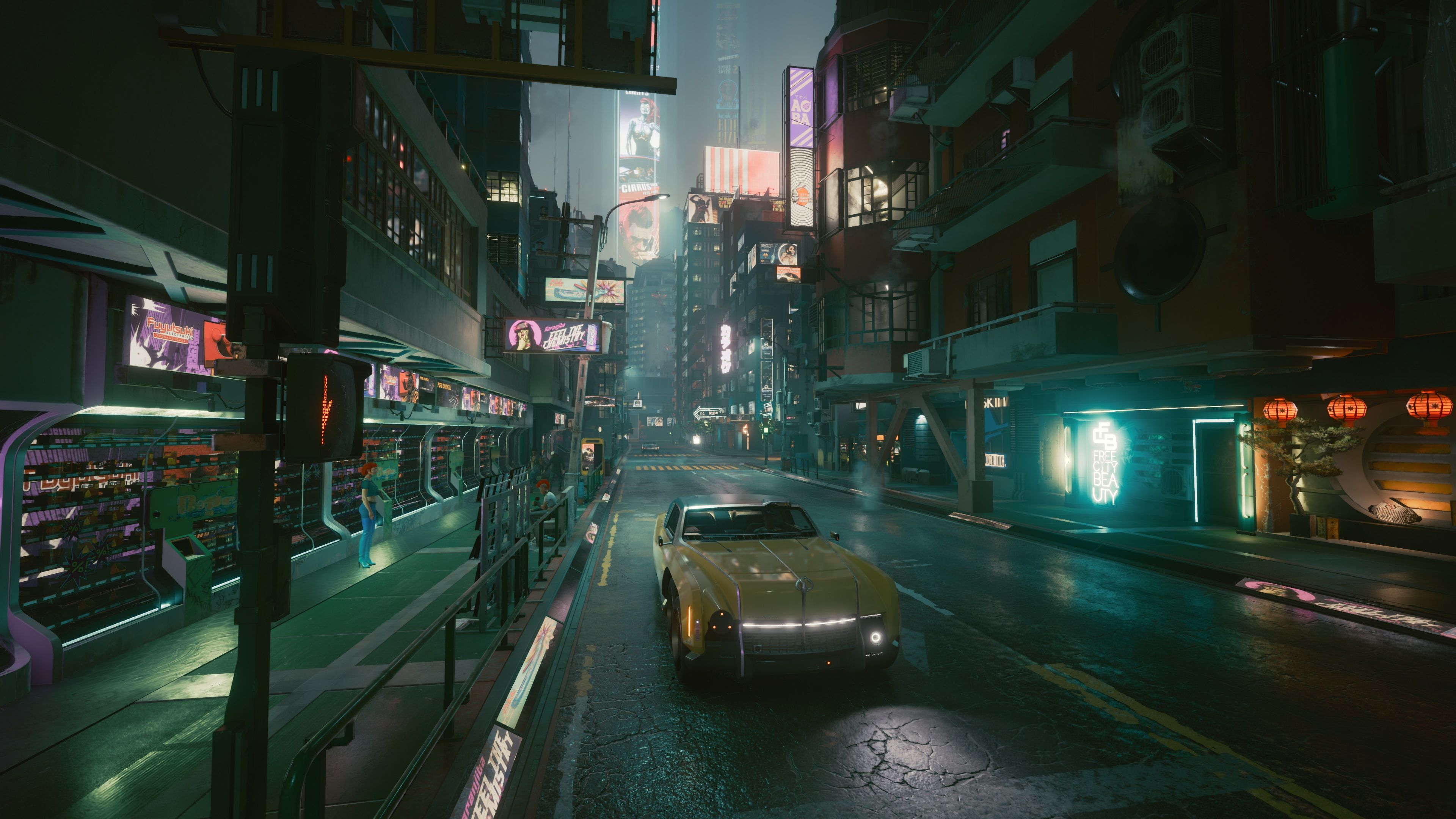 By now, I hope you can see just how profound the addition of ray tracing is to Cyberpunk 2077. The various ray tracing effects combine to truly elevate Cyberpunk 2077 into something which is so utterly beyond anything else we’ve seen. This is the new standard for ray tracing technology and shows what can be achieved when the primary focus is pushing the limits of the best of the best.

Cyberpunk 2077 is nothing short of a technical masterpiece.