It would be a tad disingenuous of me to not admit my excitement and anticipation for Assassin’s Creed Valhalla. I’ve played every mainstream entry in the franchise and, apart from my gripes with Assassin’s Creed 3, have really enjoyed them all. Valhalla is the third entry after the franchise was softly rebooted with Origins in 2017. In that time, the AnvilNext engine has seen some upgrades such as migrating to DirectX 12. However, for a game releasing in 2020, the lack of such future technologies like ray tracing and DLSS are notable. Let’s take a look at the PC port of Assassin’s Creed Valhalla and discuss why we’re at a point where pixel quality is more important than pixel quantity.

If you have played Origins and Odyssey before it, or really any recent Ubisoft PC game in the last three years, the PC options menu should feel familiar. Ubisoft continues to lead the field in their exposure of not just options, but also information to the end-user.

We can see each graphics options outlined on the left hand side with a screenshot, tooltip, and VRAM usage meter on the right. The fact that such options menus are not standard in PC games in 2020 continues to be a sore point of frustration for me.

Additionally, Valhalla still requires a full game restart when modifying certain graphics options. This means that if you’re trying to measure performance, prepare yourself for multiple lengthy restarts courtesy of the intro splash videos. Fortunately, you can disable these videos by renaming them. But right away, we’re seeing two obstacles here: graphics options requiring restarts, and unskippable intro videos. Not good.

You can watch our video analysis here.

Once you jump into Valhalla, however, you’ll notice a few things immediately. From a visuals standpoint, Valhalla is very similar to Odyssey and Origins. And this makes sense since they share underpinning technology. The big difference is in the move to DirectX 12.

I had hoped that such a move would alleviate performance, and this appears to be the case to an extent. Remember, ultra graphics settings will result in diminishing returns on performance and visuals. But it’s at these ultra settings where CPU usage becomes an issue, at least on my PC running an overclocked i7 8700k.

When playing at max settings at 4K resolution with a 2080 Ti, I would experience CPU usage spikes in thread number 3, upwards of 80% in some instances, whenever I entered settlements and villages. This would cause my performance to plummet to the mid-30fps range and result in visible stutter as frametimes were erratic. When I left these settlements, CPU usage on that thread would return to normal as my framerates would increase back up to 55-65fps.

­I’m wondering if this is simply a limitation of my personal CPU, or something deeper. Fortunately, this can be alleviated in several ways. And it’s here where I’ll discuss two options with regards to graphics settings. Both of these options are meant to target 60fps at 4K. However, if you don’t have a 2080 Ti, you should still find value in these options as they should scale across resolutions.

There are roughly five graphics settings which all have a measurable impact on performance: Antialiasing, Volumetric Clouds, Shadows, World Details, and Clutter. Again, if you’ve played Odyssey or Origins, these options should be your first port of call. However, there is room to play here. My two options for recommended settings in Valhalla are almost inverses of each other in the path they take, but the end goal is the same: target 60fps at 4K.

Remember, the antialiasing in the last three Assassin’s Creed games works as an upscaler of sorts. That is, reducing the option from High to Medium, or High to Low, will internally render the game at a lower resolution before reconstructing the image. In my opinion, this reconstruction, when paired with driver-level sharpening via Nvidia or AMD, results in a clean looking image. For instance, in this scene when all other settings were maxed, reducing the antialiasing from High to Low resulted in my framerate increasing from 35fps to 45fps – an increase of 28.5%. However, the image quality remains roughly the same. Take a look at this fishnet and notice how it still appears clear when antialiasing is set to Low.

Therefore, Option 1 recommended settings include reducing antialiasing to Low, while reducing Volumetric Clouds to Very High, and Shadows to Very High. You can keep World Details and Clutter at their maximum settings. Of course, you can reduce clouds and shadows lower still if you’d like. But this Option 1 is aimed at maintaining graphical fidelity while trading off raw pixel count.

Option 2 recommended settings includes keeping antialiasing at High, and thus native resolution. However, this necessitates reducing World Details, Clutter, and Shadows to High, and reducing Clouds to Very High. Again, you can reduce shadows still. This Option 2 is aimed at maintaining raw pixel count while trading off graphical fidelity.

The differences in visual quality are best observed at the end of the in-game benchmark. Notice how Option 1 produces greater world detail while Option 2 preserves native resolution. However, in the end, they both result in higher framerates. If you pair this with a variable refresh rate monitor, this should feel fine. Of course, your mileage may vary. Therefore, feel free to use both my Option 1 and Option 2 recommendations as a baseline with which to tweak your own experience.

Other similarities Valhalla shares with Odyssey and Origins is its rendering of characters. That is, while character models aren’t bad, they’re not what I expect in 2020. Certainly, even looking back on previous Assassin’s Creed games brings us to Assassin’s Creed Unity, perhaps the gold standard for character rendering in this franchise. When compared to Elise or Arno, characters in Valhalla – including player character Eivor – look lacking.

You can see how much more accurate and higher fidelity skin rendering is in Unity. Indeed Unity’s subsurface scattering alone is a clear cut above the effect found in Valhalla, which appears more clay-like by comparison. This extends to the skin texture resolution and shaders used in Unity which appear to be of higher quality compared to Valhalla. In this regard, character rendering in Assassin’s Creed games have taken a huge step back from 2014’s Unity and have been unable to match it since. This is a huge shame.

Texture resolution appears to be inconsistent in Valhalla in general. While some surfaces like snow, character weapons, and doors of buildings appear high resolution, other objects like tables and some terrain appear to have lower resolution textures. This inconsistency isn’t new to Valhalla as it was exhibited in Odyssey and Origins, but it is distracting and disappointing nonetheless. 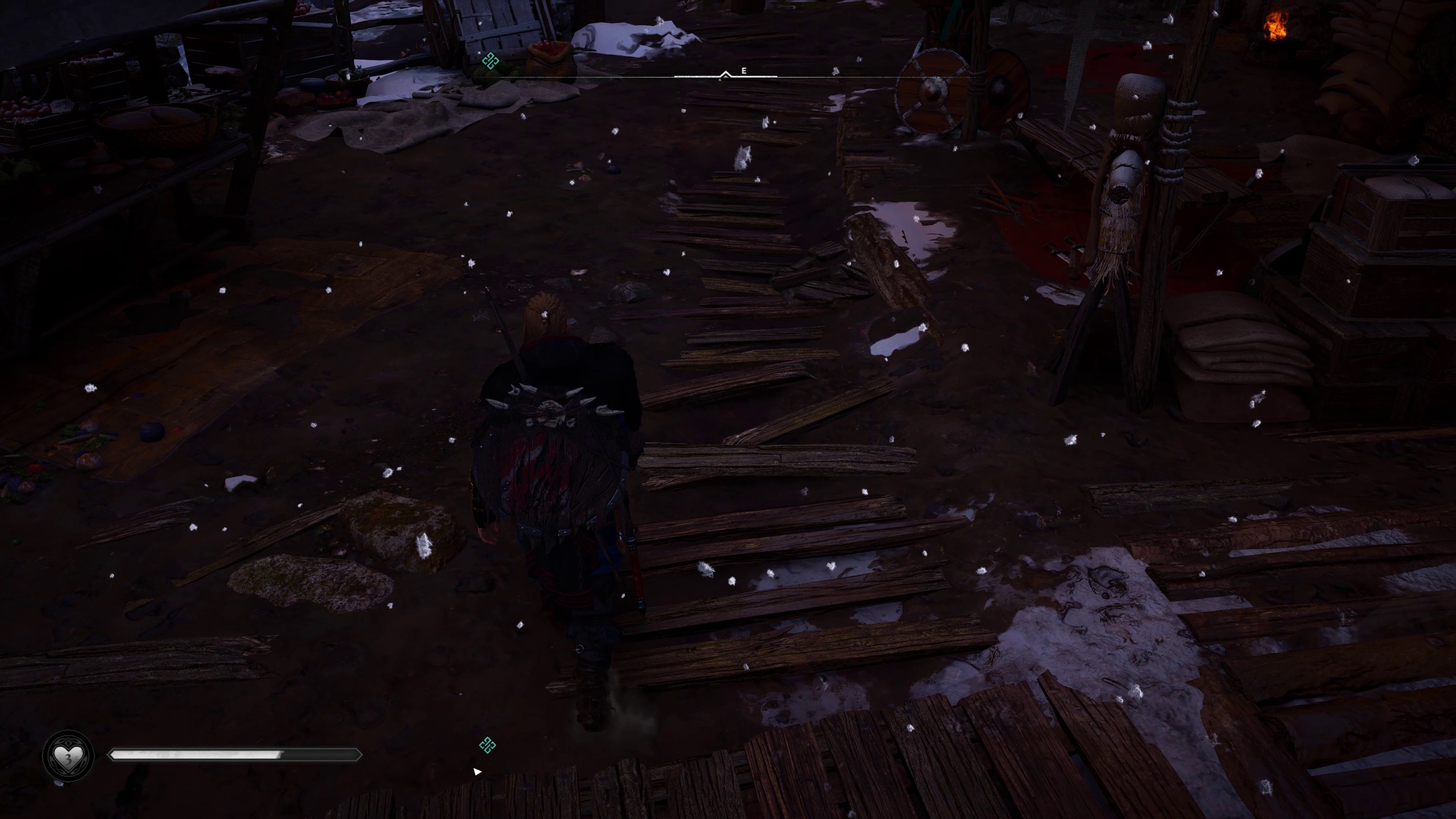 The game also has some technical issues. For example, I frequently encountered disappearing geometry on objects like fences, merchant stalls, and the like. No matter how much I played with my settings or verified game files, this issue persisted.

Additionally, Valhalla’s HDR on PC appears to be broken. Despite adjusting luminance values and exposure, the image appears either too dim, or completely overexposed. I had this same issue with Odyssey. Even after disabling various third party apps on my PC, this issue persisted.

Finally, there is a legitimate issue when using the Xbox controller. Whenever I used it via Bluetooth or wired, I would always experience a momentary freeze when switching from controller to keyboard and mouse. This issue was nonexistent while using the DualShock 4. For the life of me, I cannot figure this one out. While working on his review, Bradford mentioned this to the Ubisoft team so hopefully a fix is coming soon.

In conclusion then, Assassin’s Creed Valhalla has its issues, and I would be hard-pressed to call it a stable release. Ubisoft has their work cut out for them, especially with the PC release. After 11.5 hours in the game, I’ve experienced a couple of freezes and crashes to desktop. Speaking with others who are playing on console and higher powered PCs, they’re not having a smooth experience either.

However, the key takeaway from this analysis is this. We are at a point where raw pixel count is becoming less and less relevant. This is due to the drastic increased efficacy of reconstruction techniques, whether aided by machine learning like DLSS, or more traditional techniques like temporal reprojection.

PC and console gamers need to start thinking about pixel quality over pixel quantity. Assassin’s Creed Valhalla is yet more proof of this. I hope you found this analysis helpful. In the meantime, be sure to check out our review in progress and be on the lookout for our full review soon.