Successful games have often stood the test of time by creating a shared universe, a rich base onto which game makers can add layers of detail and complexity over time with new releases - something for which many forms of entertainment media, from books to games to films and TV shows, strive. But what else is in the magical formula to success?

My own experience of RuneScape began around six years ago, just before I joined Jagex in 2014. Having been aware of RuneScape for some time I was curious as to why this game, hatched from the brain of Andrew Gower in his parents’ kitchen back in 2001, was still getting so much attention from my friends and colleagues many years later. It turned out the game had undergone some transformational changes in recent years and was growing again.

Having missed the play-it-at-school-in-the-IT-lab craze of the noughties by about 20 years (the last computer I played games on at school was a BBC Micro), I decided now was the time to don my noob shoes, jump in and give it a try. I quickly found myself embroiled in bizarre plots to poison pies, infiltrate secret penguin hideouts and unlock hidden elven cities where everyone appeared to speak Welsh.

The game sucked me into its weird and whimsical world and I wanted more. After meeting up with some of the Jagex crew at GamesCom, and later joining the company, I learned how RuneScape has carved out a fascinating place in games history. Over the course of two decades, Jagex had created a $1bn franchise and defined the meaning of a true living game – long before terms such as ‘live service’ became popular.

OUT OF GAME EXPERIENCES

A few days after joining the company, I was fortunate enough to attend RuneFest. This is our annual fan convention where players of RuneScape and Old School RuneScape (the nostalgic 2007 version for players who prefer a back-in-the-day experience) come together to hang out, meet their friends and clan members, talk to J-Mods (Jagex staff), check out latest announcements and demos, seek hidden penguins, and generally have an awesome time. This was more than just a fantastic introduction for me, it also drove home how the success of the franchise is elevated by its existence outside of the games themselves. Players shared their experiences and asked me about mine. I met people that I am still in touch with today and have met at RuneFest several times since.

RuneFest is a true out of game experience, which is, to me one of the fundamental pillars of what makes a living game, and can be seen in other massively successful franchises like Minecraft’s MineCon, or Halo’s Halo Fest. It’s the most tangible example of a franchise going beyond the screen and becoming something much more. The hobby becomes a lifestyle and the connection between the player and the game makers becomes a strong bond.

This connection between the players and the J-Mods clearly runs deep. As many J-Mods were (and still are) RuneScape players. They share a common vision, enthusiastically exchange ideas, designs, concepts and most-importantly, have huge passion for the game. This kind of dialogue through social channels and live-streaming - all geared towards enhancing the player feedback loop – is essential to make a franchise feel “alive”, rather than just something monolithic and intractable. For a good example of this in action, check out how the The Fall Guys has been managing its recent launch. Jagex take this to the max in Old School RuneScape with new content requiring a majority player vote to make it into the game. 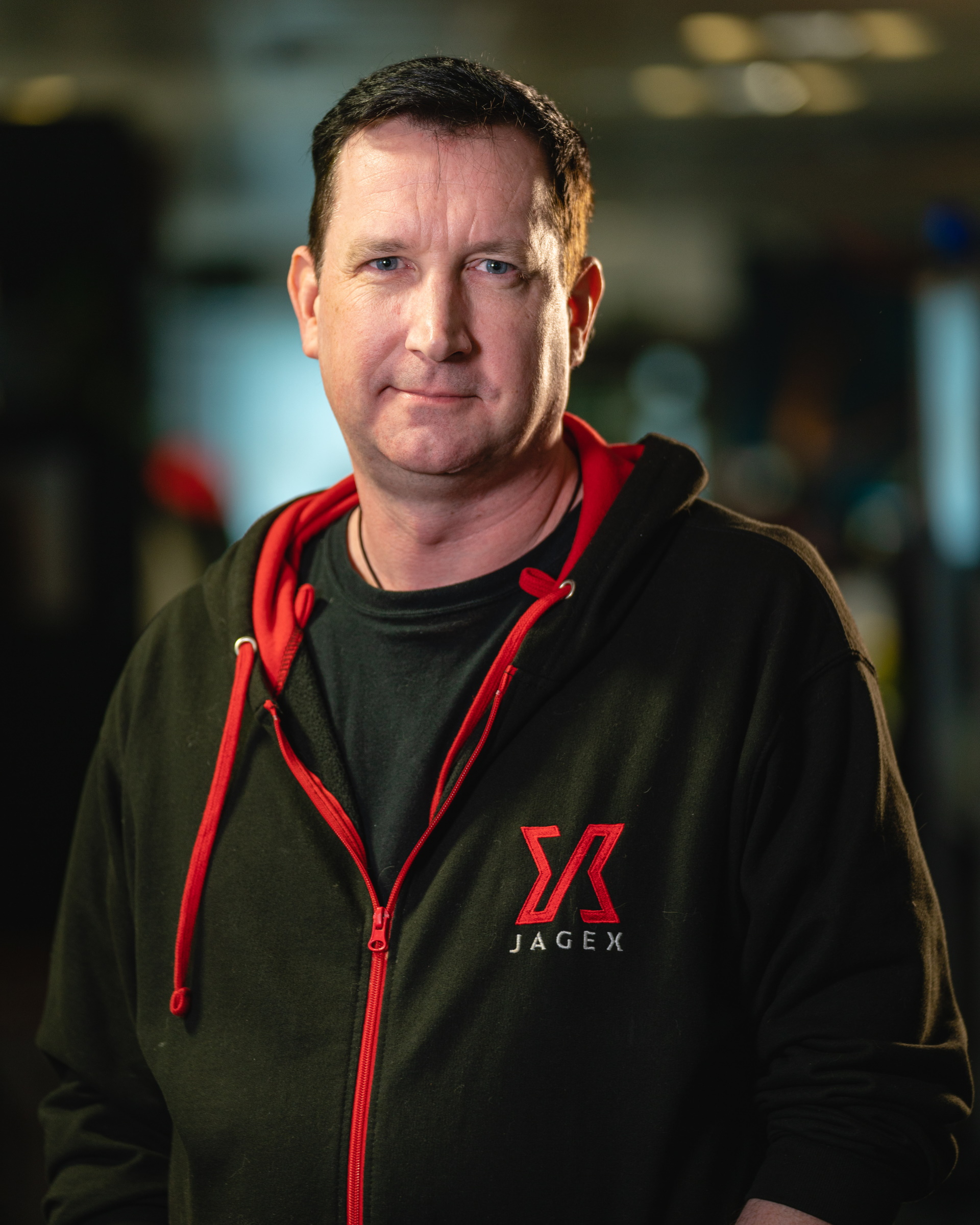 Player empowerment is crucial for the long-term health of a successful games franchise. Our players have a real voice in the future of our games and are involved in how they are shaped in a variety of ways, from surveys and polls to social channels and site visits to Jagex HQ. We listen to our players every day and discuss feedback continually to help guide our decisions (even if we don’t always get it right first time).

One of the first things that struck me about the game when I started playing was the friendliness of the other players. They seemed genuinely curious of my obvious noob status (presumably from my lack of fancy armour) and I found myself regularly hailed to ask if I was genuinely new or had played before. I quickly found people who were happy to stop what they were doing and help me out, offering gear and gold as well as advice to get me started on my journey.

Jagex make games that deliberately encourage these altruistic behaviours. We funnel players of different levels through the same areas; we ensure resources and materials remain relevant as players progress; and we create communal content that can be enjoyed by all

This felt very different to my previous experiences of MMORPGs where new players are often ignored, or worse, taunted and abused. Even in modern live service games where cooperation is encouraged, players can often find themselves siloed off and real relationships difficult to form. RuneScape seemed to have a very different spirit, even though everybody seemed clearly busy doing whatever it was they were doing, there was always someone close by willing to help.

RuneScape’s welcoming and supportive community is made up of genuine relationships; people come together to fish and chat, friendships and rivalries are made or broken, clans feel more like families. The first players I met back at RuneFest 14 explained to me that even though they had reached max level in all RuneScape’s skills some time ago they stick around or come back for these meaningfully social connections. The lesson here for franchises looking to secure long term appeal is that the connections are what matter, between players and game creators, players and other players, and both in the game and outside of it.

Throughout their adventures in RuneScape’s twisted fairy-tale world, players develop and personalise their character, improving skills and honing combat efficiency along the way. As much about self-expression and sandbox play as it is elves and goblins (although there are plenty of those), simply training the different skills is an engrossing challenge in itself. The recently launched Archaeology skill is a particularly enjoyable example of our design philosophy: relic-hunting with compelling core loops and rewarding progression that unlocks new areas to explore.

In contrast to some franchises that succumb to stagnation or burn themselves out chasing trends, RuneScape is built around this evergreen design principle, with content that is carefully curated as the game evolves over many years and is expandable without becoming dull. This helps create a self-sustaining world that can truly stand the test of time.

New skills are just one part of the RuneScape content strategy, alongside other experiences that are designed to deliver a believable game world for players to lose themselves in. Quests that play like mini adventures, dangerous dungeons filled with challenging bosses, seasonal events, skill training hubs, quality-of-life improvements and patches are part of the weekly updates that keep the game fresh and evolving. We are also continually improving and modernising the player experience, smoothing out the rough edges and building a tech stack that makes the world of Gielinor more accessible that it has ever been before.

The RuneScape franchise of games delivers these alive and evolving worlds in different styles to suit different audiences. We want players to have a choice and design our products to provide it in exciting and sometimes unusual ways. The success of Old School Mobile has rekindled many players’ love for the game, and demonstrates the potential value of having a franchise touchpoint across multiple devices. With the way that the industry is moving, franchises that maximise their accessibility through releases and features across multiple devices, or that make their main titles accessible through any device will be able to maximise their player engagement for the long term. This is a huge driver for our launch of RuneScape Mobile now in Early Access on Android and Closed Beta on iOS – the launch of which will make fully cross-platform living games on the go a reality!

RuneScape has been on a journey over the last 20 years, and I’m proud and delighted to play a part in it. Living games can have a profound impact on people’s lives and we want to share that experience and ensure it continues long into the future.

This year has been particularly challenging, not only because of the global pandemic, but also due to our own efforts to keep delivering on our commitments to players during this time. We’ve changed a lot already this year and looking ahead, players will see more change during the second half of 2020, including more great content at an improved pace.

Released this week, the latest RuneScape quest entitled Desperate Measures I believe delivers the living game magic sauce by the bucket-load, with great characters, intriguing mysteries, incredible music, exciting lore reveals and great rewards. Incidentally, this is the first major update we’ve worked on and released with the entire team working from home under lockdown conditions. We’ve tried to be as supportive as possible throughout this time, especially with many people on the team dealing with limited or shared workspaces and increased requirements for childcare and home-schooling.

We are proud of how everyone has adapted and are delighted by the results. Judging by the reaction, so are our players!