Zenith: The Last City, a VR MMORPG by RamenVR, has been out for more than a month. The developers have continued to add in content, patch bugs, and communicate regularly with the community. Though, they did have an issue when legendary items were removed without advanced warning, leaving players unable to progress towards finishing the grind to acquire them. Most of the patch content has been a step in the right direction. But there are still many bugs impacting gameplay and pacing issues. The endgame content is also quite limited. Is this a game for you?

Adventuring in Zenith has continued to be a fun experience. Playing the game reminds me of my first experience with older MMORPGs like EverQuest while including features that work best in a VR environment to give it a breath of fresh air. Unfortunately, this trip down memory lane also has some bad aspects of those earlier games, such as slow progression and excessive grind.

As I progressed through each zone and the MSQ, I have constantly found myself lagging by at least one level. If enemies are three or more levels higher, my attacks barely scratch them. The game forces you to grind out those missing levels by going back and repeating hunts (collection quests) and public events till you catch up with the recommended level for a new area. Joining a group for public events can be a lot of fun and a fast way to gain experience. But if you can’t find one, it quickly becomes a repetitive grind with a few side quests.

The developers have added some additional content to help fill in the gaps, but most of the quests added are repetitive. I am still enjoying the zones, and the MSQ is not bad. Each area also has touchable stones that provide a snippet of voiced lore about the world. But overall, the story is not something I will remember a year from now. Gliding is fun, and I highly recommend turning on sensitive gliding in the settings. You can then shift your hands to alter your speed and angle of descent/ascent, making it easier to complete the gliding quests. 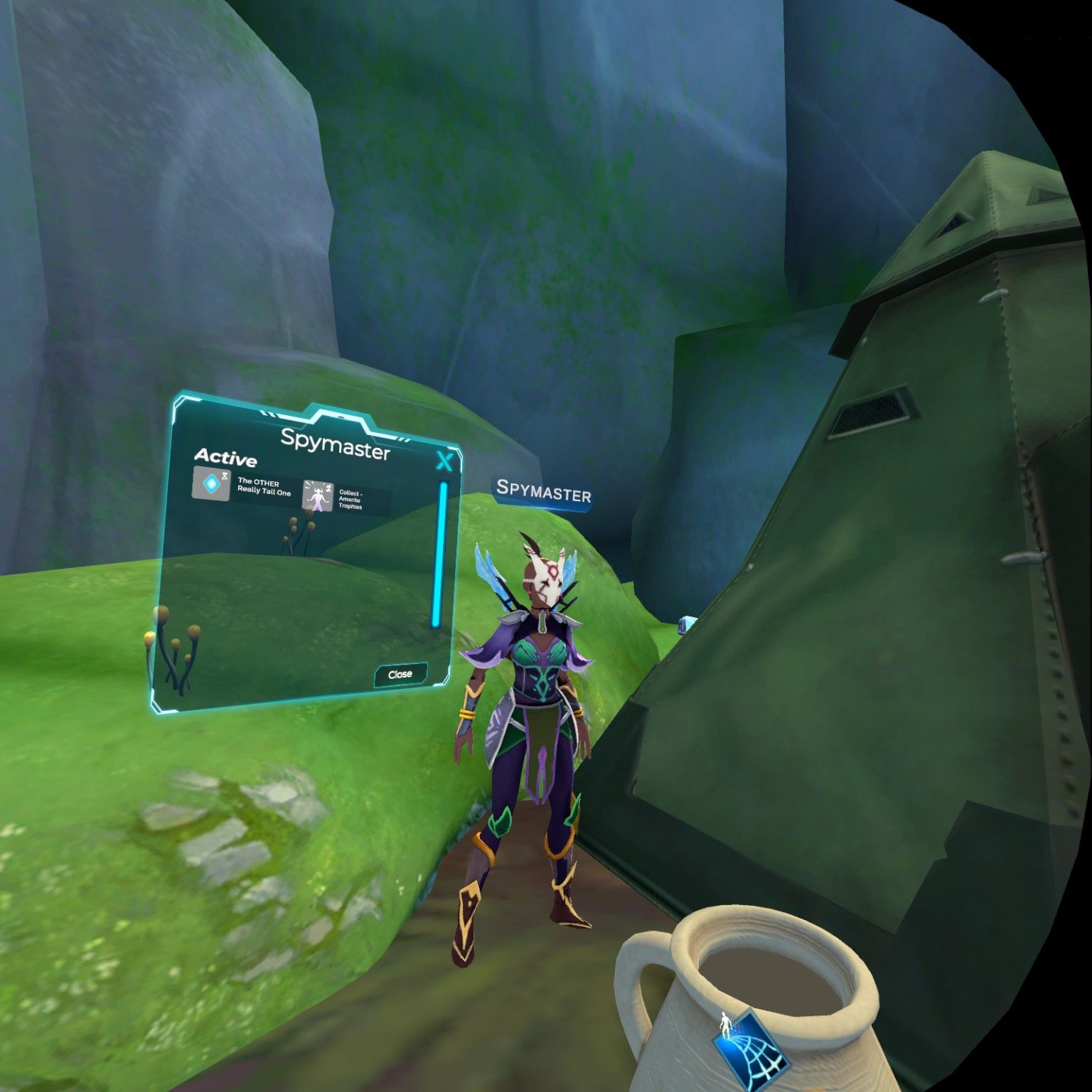 Zenith shines when played with others. Social situations and group combat are both a lot of fun. Sitting around cooking with others is a unique experience in VR. I wish other trade skills were available so that players could have more of those social moments. In combat, players tend to band together during public events naturally, and everyone involved typically falls into playing their selected roles. As a tank spec, my abilities can get an enemies’ attention easily, and I can quickly throw up defensives as needed now that I am used to gesture-based casting. 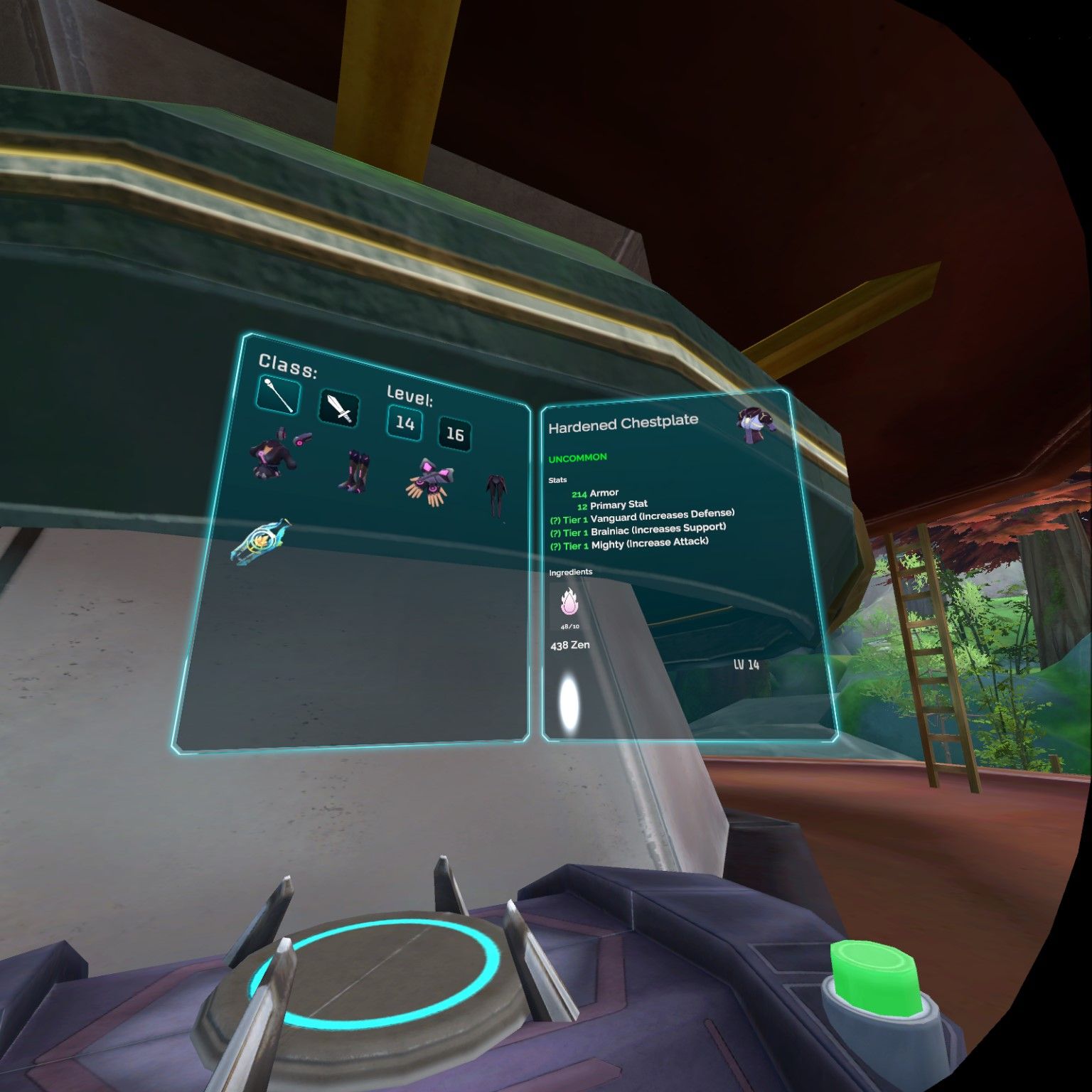 Gear in the game is also pretty lackluster right now. While leveling, there are random drops for gear of different rarity. If you are unlucky with drops, there are also synthesis stations in each area that you can feed resources into to create level-appropriate equipment. If your weapons are falling behind in level, I highly recommend using this system to make fighting easier and faster. Items can also be improved at enhancement stations using Zen and dust. The higher the bonus you are trying to enhance on an item, the less chance of succeeding.

The game is lacking in content. There is a dungeon to explore at the endgame, a world boss to defeat, and public events. For high-end gearing, you need to down the world boss with at least a dozen other players. But having more along is preferable. There is a shrine questline to collect tears that increase stamina, but again it is a collection quest. RamenVR has indicated that more content and systems are on the way this year. These include a new class (Cyber Ninja), new cosmetics, and the eventual return of legendary items. 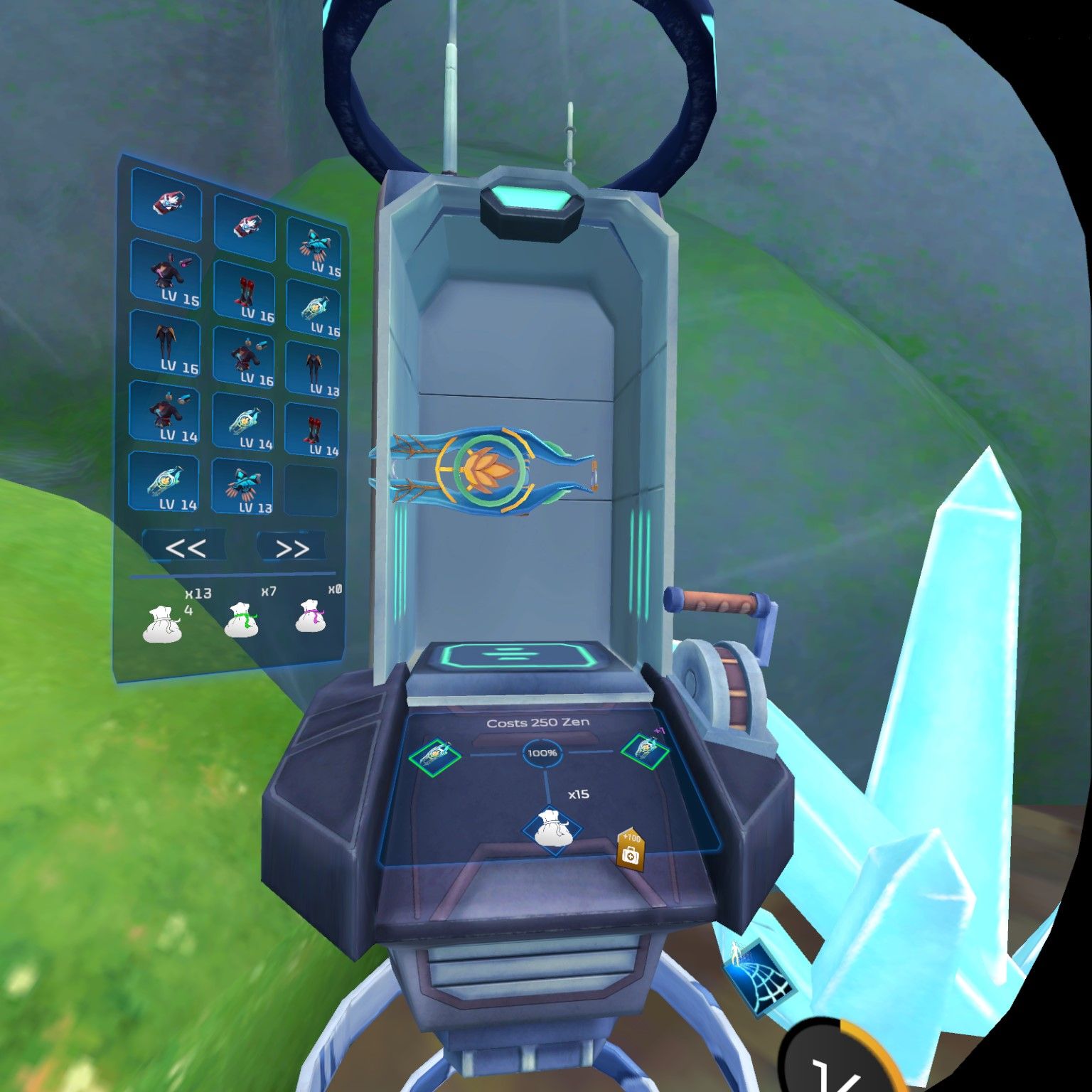 Continuing my journey in Zenith has been a mixed experience at times over the past month when it comes to bugs and technical issues. I have been mostly playing the game on the Quest 2 client and need to take regular breaks. My problems with minor motion sickness that I noted in part 1 of my Zenith review have continued. It is just enough that I need to take a break after about an hour of play. In the past week, I started to alternate my playtime using a link cable and the PCVR client, no issue playing for extended periods when doing this.

Pop-in of enemies and terrain have continued to be noticeable with the Quest 2 client, and the textures are visibly worse. They can also either load slowly or flicker at times as I run through an area. You get some minor texture issues on the PCVR client, but it is nowhere near as bad. I have also come across rare stuck and invulnerable enemies, a pretty common issue for almost any MMORPG.

I have found the PCVR client easier on the eyes, the textures are better, and the colors more vibrant. It made for a much more comfortable and engaging experience. When opening the game menu to access inventory/abilities/map, I did notice a flickering of the UI in PCVR, but it was intermittent. The main downside was having to deal with a tether cord. If you have a decent connection with Air Link or a tethered headset, I recommend playing Zenith using the PCVR client.

The server issues from shortly after release have mostly been resolved. Lag bubbles are few and far between, making the game more enjoyable. I have rarely been disconnected and haven't experienced any crashes. Characters are available between servers, so I can just pick another one if one is at a low population.

Zenith: The Last City, by RamenVR, has been a hard game to rate. It is an excellent VR experience that shows what the future of a fully realized VR MMORPG could look like, and Zenith could be that MMORPG with time. The game can be a grind, especially when soloing. But the combat, group activities, and box price all are on target. Features like climbing and gliding make for a uniquely VR experience. But lack of content and the existing bugs are currently holding it back from being a must-own VR title.