Ys Origin might have launched on PC back in 2006 but after more than 15 years the classic RPG is back on the Nintendo Switch.

Developed by Nihon Falcom and published by Dotemu, Ys Origin is a prequel to the hugely popular Ys series of Japanese RPGs. It plunges players into the shoes of three warriors, each of whom strives to retrieve a pair of lost deities. Your quest, should you pick up Ys Origin, leads to an intimidating spire that radiates danger and an old school hack and slash ARPG that might end up surprising you.

Despite taking place a full 700 years before the very first instalment in the ys series, long befor Ys Online faded into obscurity, Ys Origin seems to have aged surprisingly well. While the original release of Ys Origin has undergone something of an upgrade, the opening animations that plot the rise of a demon horde and a desperate escape to the skies look fresh and vibrant on this new platform. Once the pre-rendered introduction to the world of Ys fades to black, it is obvious that the move from large panels and high refresh rates of recent console ports to the smaller screen of the Nintendo Switch benefits this classic dungeon crawler. A mix of classic hand-drawn animation and refreshed pixel art is intertwined throughout Ys Origin and it all looks far crisper than it has any right to. From the moment the character selection fades from screen and you take your first steps into battle, the isometric 2.5D levels might look decidedly retro but any assertion that they are low fidelity is largely lost when squeezed onto all 6.2 inches of the Switch’s handheld mode. 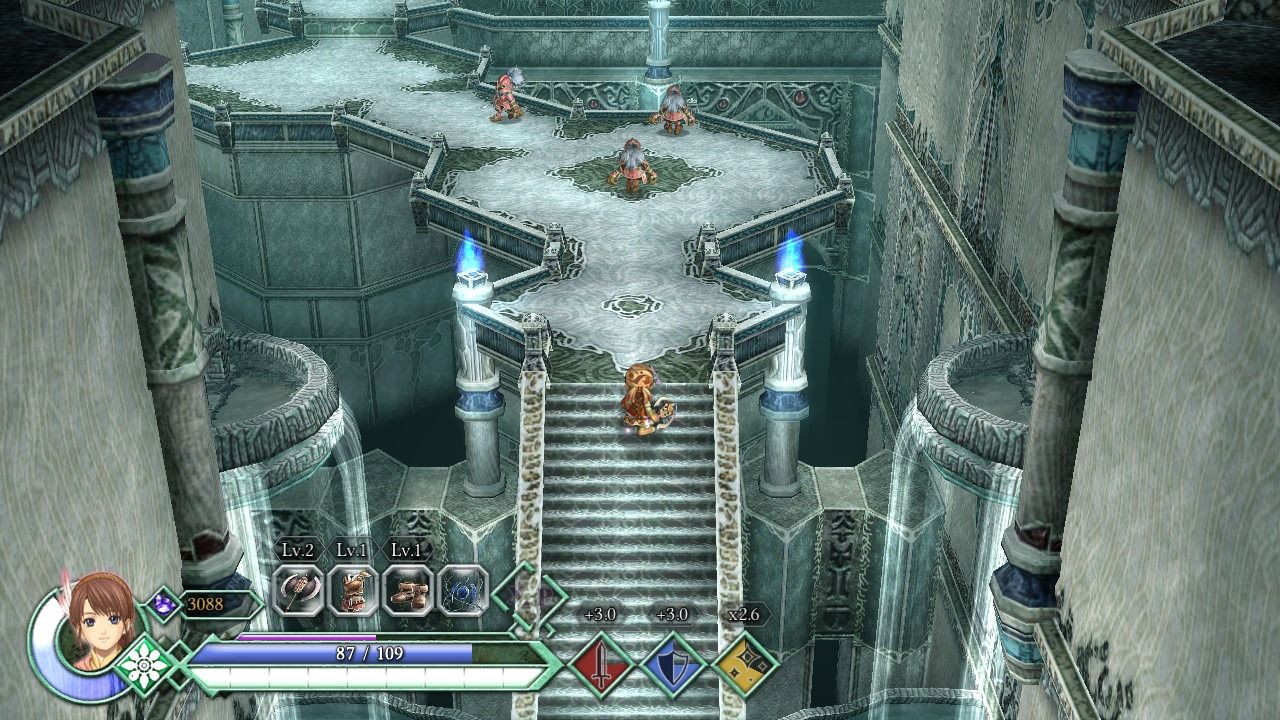 This feeling that Ys Origin holds up far better than it should do continues past the initial animations and opening salvo of this adventure. Moving off into the many dangers that lie above, you are forced to climb through a series of dungeons, conquering floors and overcoming a range of bosses to keep moving forward. Whether you chose to wield either Yunica or Hugo as your protagonist for the first playthrough, combat feels fluid and is just fun. Unlike the turn-based tactics that flesh out so many Japanese RPGs, Ys Origin is a real-time action affair. Adventurers are armed with a basic attack, a skill, and a burst ability that allow each of the game’s protagonists to wield a playstyle all their own. As things progress, this is augmented with new skills and a solid, if limited, gear system that never overwhelms the core hack, slash, and zap combat of the various characters.

The free form combos of Yunica’s axe are a great way to start cutting down monsters and the control systems are intuitive enough that I could almost be convinced the Joycon was always supposed to be the weapon of choice for tackling this tower. The other opening character, Hugo, takes an entirely different approach, wielding spells and providing a great change of pace for a second ascent of this tower. Smashing through enemies on lower levels with any of the game’s playable characters is satisfying, but it can seem simple at first. These encounters, thankfully, become progressively more complex, as characters unlock and use Fire, Wind, and Thunder magic to do more than just burn down their enemies.

Slashing your way through hordes of oncoming enemies and tracking down the odd key is enjoyable precisely because it is simple. With a plethora of floors to overcome, Ys Origin provides plenty of unique mobs that are far more inventive than the usual run of the mill winged demon, skeleton, or undead guard. It also rarely suffers bloat. A variety of straightforward encounters, galleons of loot, and simple puzzles keep pushing the narrative forward with plenty of new designs and pepper these mobs with more challenging boss fights. Once again, boss encounters in this Ys prequel are not overly complicated, but they are varied. From the slightly disturbing Nygtilger to the gargantuan Gelaldy, that towers over a magma filled room, these one on one encounters provide a change of pace that forces you to step back and consider how to approach each adversary. A sufficiently difficult set of phases and some pretty punishing attack power mean that taking down these oversized troublemakers is all about skill and patience. 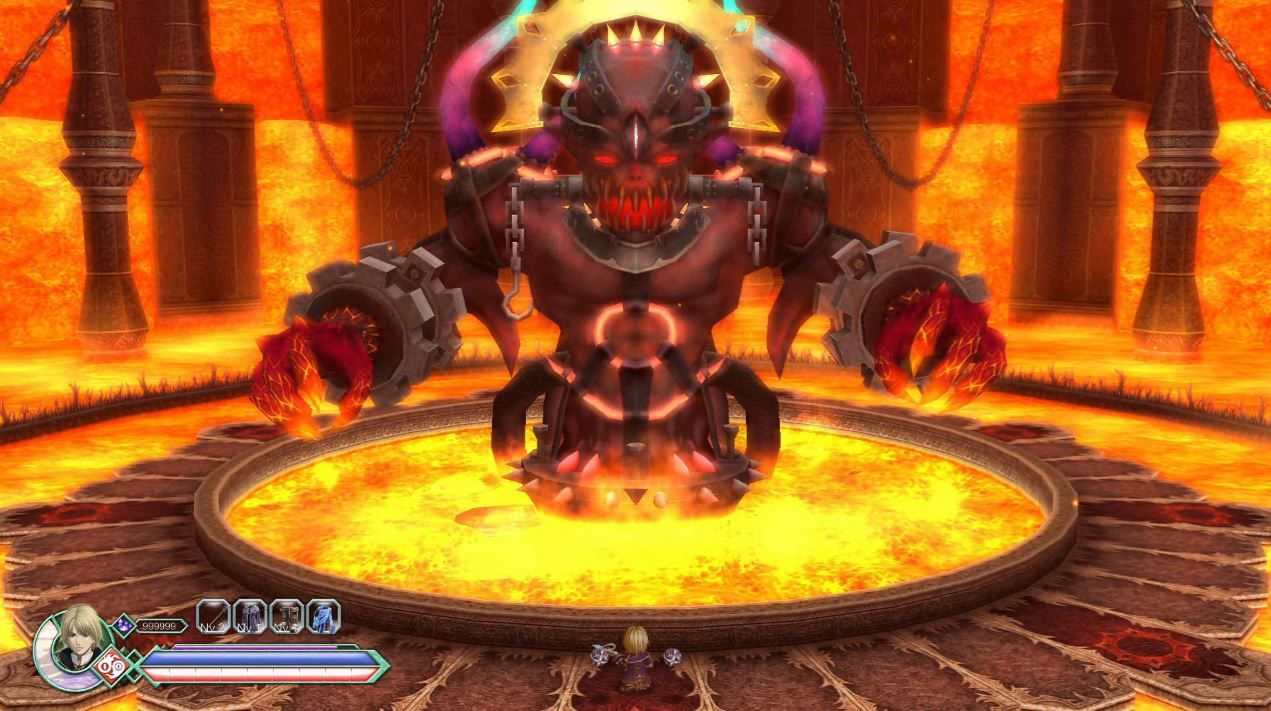 Chewing through each boss encounter while questing through the main narrative should not find players facing any scenarios that can’t be overcome in around 10 hours of standard difficulty. While this seems short, Ys Origin is more than a one-shot story. Taking on overwhelming forces of darkness from more than one character’s perspective isn't just a fantastic storytelling device, it actively unlocks new ways way to play. The same platforming puzzles, trash mobs, and boss fights play to the differing strengths of each character. While Yunica’s melee-focused combat makes her fantastic at clearing trash mobs in dungeons, it leaves the same character exposed in close range boss fights. Alternatively, Hugo’s ranged magic makes things a might less challenging when going up against these huge targets.  Neither of the two default characters suffers much in the main campaign, however. The simple combat systems and option to simply grind out a few extra levels of power mean that winning is no more problematic than learning the ropes and leveling up again.

Ys Origin continues to build on the original release even further by injecting even more variation through a range of game modes, providing extra content beyond the basic story. Completing the story via the default two paths unlocks the fabled Claw, a brand new way to trace the tale of Ys, and once you’ve overcome the main narrative, it is time to take down the tower in Time Attack, Arena Mode and a Speed Run mode. Falcom’s classic RPG consistently keeps giving players a reason to return to this fantasy realm. Whether it’s unlocking the Claw, for another tale of heroics or taking on taking on the arenas. Each time you achieve a victory, Ys Origin unlocks a new avenue for adventure and it’s refreshing to be rewarded with something that isn’t just another glamour pack for your efforts or extra content that isn't firmly cemented behind a paywall.

This variation on a basic framework is a core tenant of what makes Ys Origin so engaging. What might seem like a linear high fantasy dungeon crawler from yesteryear continues to hold up with lots of well paced but varied bursts of action that change the player experience a little more each time. Surprisingly fluid control systems provide plenty of fast-paced combat and the graphics do hold up particularly well on the small screen. Don’t expect the latest port of this Ys title to change the way you think about the modern RPGs. It definitely lacks some of the complexity that you might take for granted in recent Ys installments. Despite this, I couldn’t stop coming back to the tower for just one more try. Ys Origin is utterly addictive in all the best ways. Pick it up, slay some monsters, then come back for more with Ys Origin on Nintendo Switch now.