Creative Assembly has introduced new multiplayer battle types and expanded the number of players to a maximum of 8 in Total War: Warhammer III co-op campaigns. Each of these features brings in new mechanics and fun elements. But do they hold up after multiple battles, and are there any issues?

Survival, Domination, Storm of Magic, Minor Settlements, and campaign multiplayer are added/improved features in TWW3. The maps used in battles are pulled primarily from the single-player campaign. Many of the new features also appear in some fashion during the campaign.

During the single-player campaign, which we talked about in our initial review in progress, players enter each Chaos Realm. The goal is to defeat a prince in each area. You do so by assaulting the realm’s fortress in stages. Each stage requires the player to capture an objective and hold it against enemy reinforcements. During the battle, supplies build up by defeating enemies and taking objectives. These are then used to build towers, defenses, and spawn reinforcements. In multiplayer, this is the same experience right down the short cinematics played at the start and end of each battle, except that you can have friends along for the ride. 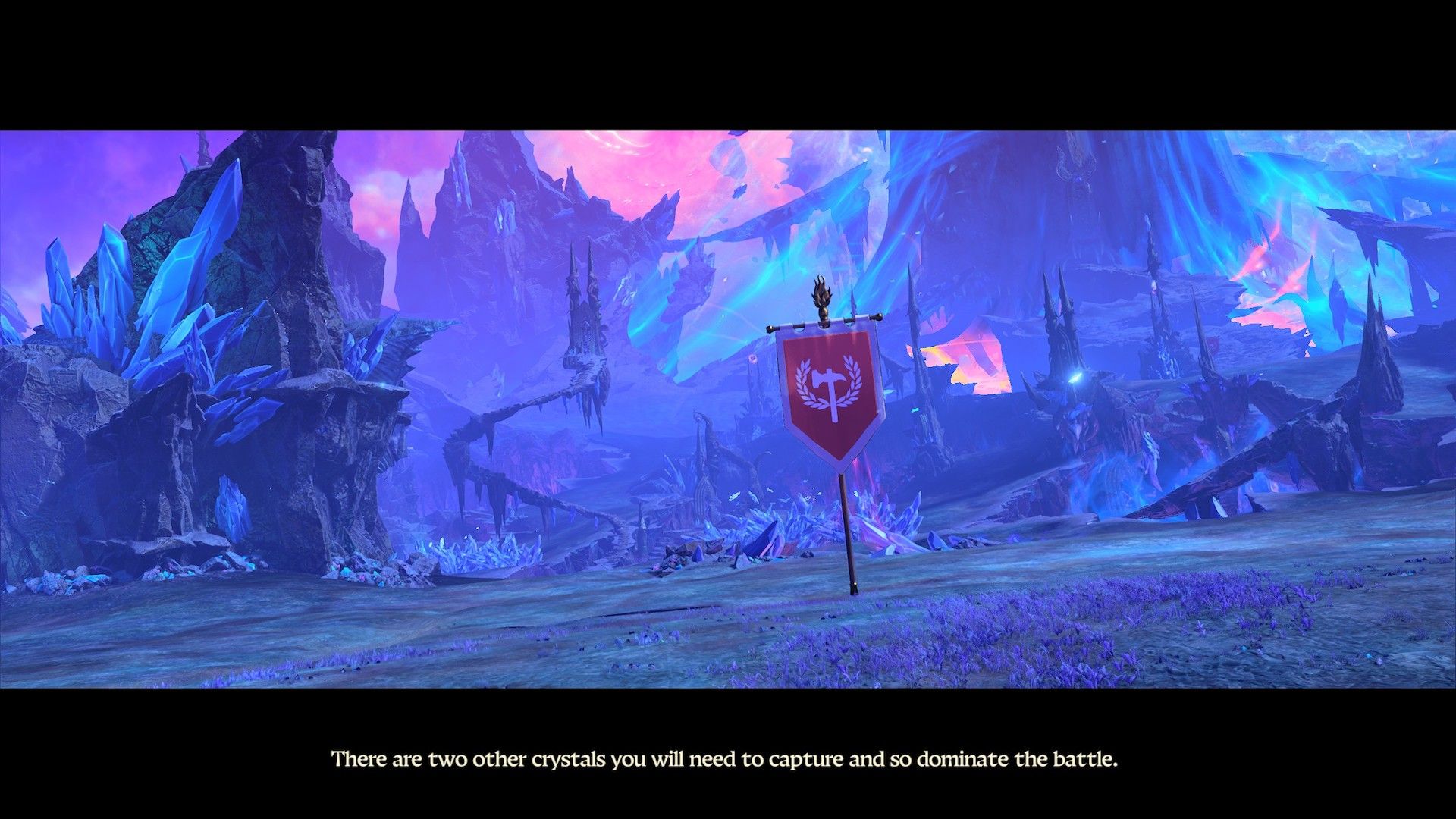 Again, each Chaos Realm has a unique aesthetic, and Creative Assembly has outdone themselves with the environments. When setting up the map in multiplayer, the players can choose if they want to face this challenge on easy, average/normal, or complicated/hard by selecting the corresponding Chaos Realm map with the difficulty indicated in brackets after the name. 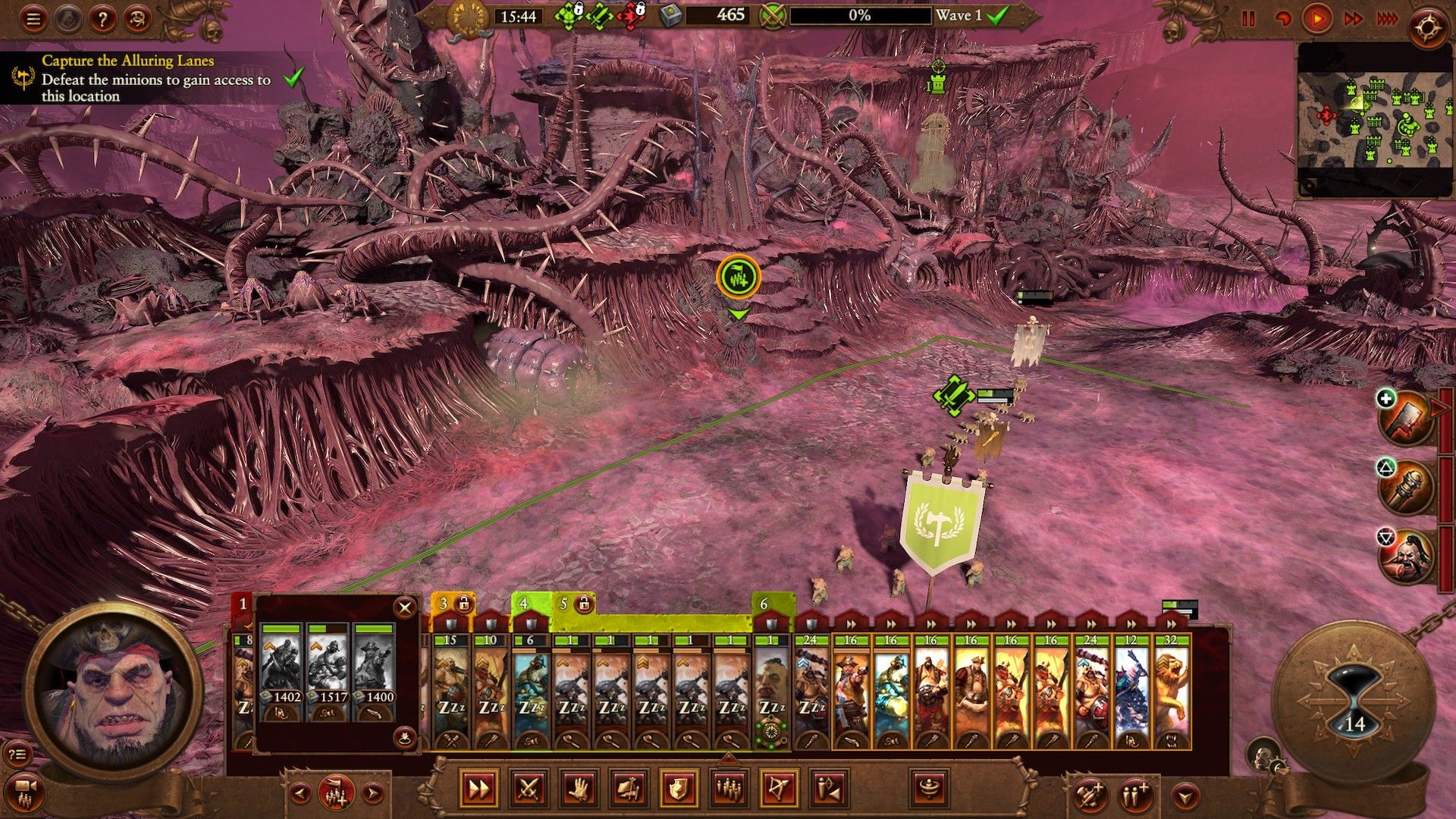 I enjoyed playing through all four maps in multiplayer. I found the towers building locations easier to locate and activate when compared to the media preview event. Also, a yellow/red circle identifies what rally point is currently active for spawning in reinforcements. I still find this “ring” a little difficult to see during heavy fighting, but it is better than nothing.

These are Land Battles with the elements of objectives, supplies, and reinforcements lifted from Survival Battles. They are a lot of fun with multiple players sharing the field and working together with fellow team members. Between playing a few of these matches myself and watching others, it is interesting to see how different players will either horde supplies or spend them early on for extra troops.

This feature is active for battles in all the Chaos Realms, except for Khorne’s, and answers the question of what happens if casters have infinite power reserves. I found myself throwing spells like crazy and watching enemy units melt/explode/freeze. In addition, each magical lore has access to powerful effects such as all units getting a bonus to melee attack and a Cataclysm spell when a lore is in ascendancy. Be warned, this effect/spell only lasts a limited amount of time. So, use it or lose it. While I wouldn’t want this feature present on every map, it is a fun experience and makes sense for battles in a Chaos Realm.

I touched on Minor Settlement Battles in my article on the single-player campaign, and my opinion has not changed. I had fun with these battles and enjoyed using chokepoints to my advantage. Settlements can have a few twists and turns depending on the map, but there are always multiple ways to access each capture point. 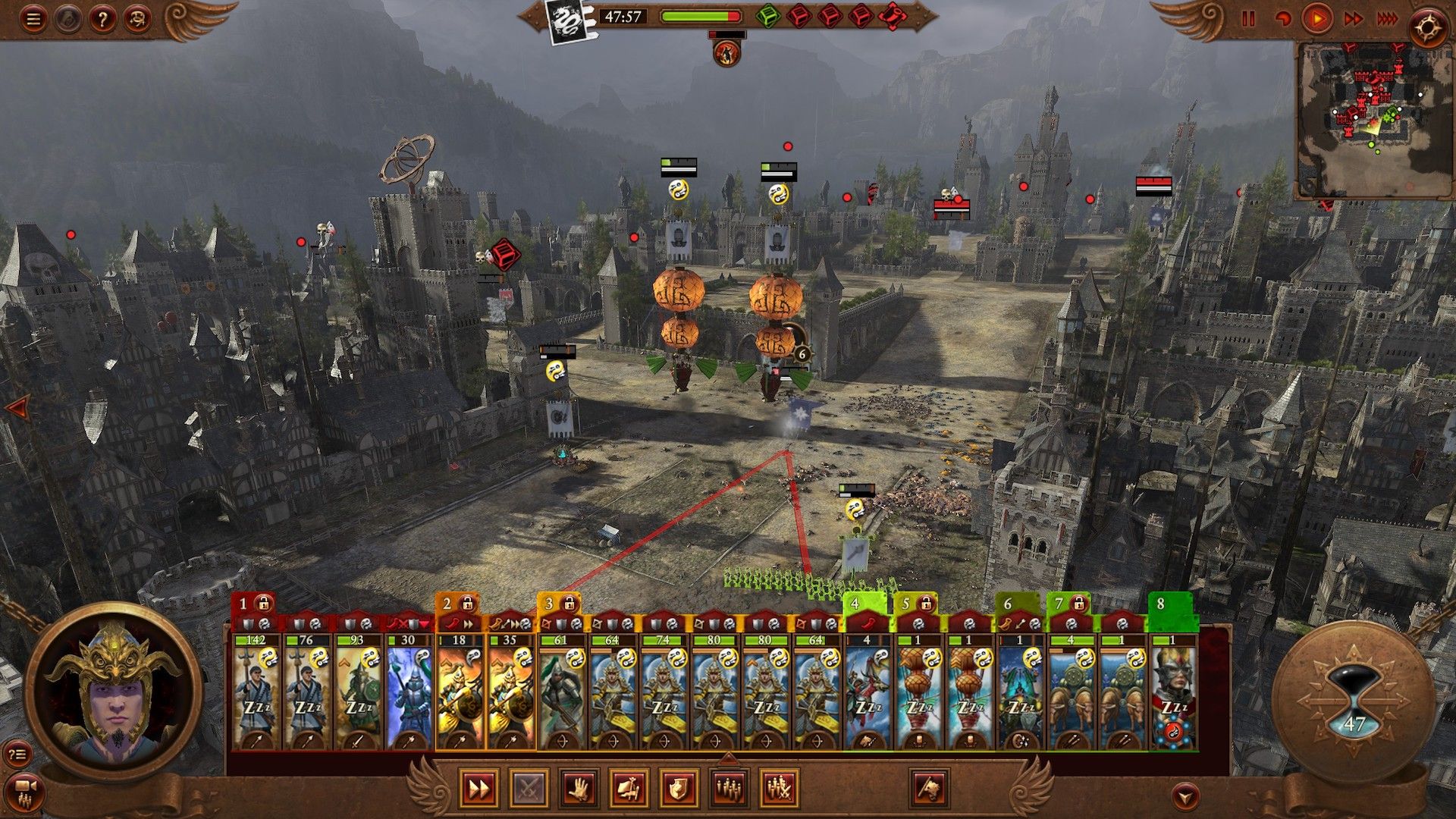 I did find it difficult sometimes when targetting the ground to move my units into narrow areas and had to pan the camera till I could avoid clicking on a wall/building. The other issue I still had was that I tended to win by either overwhelming the other side or killing their general without bothering to capture multiple objectives.

Opening the co-op multiplayer from 2 people to 8 with simultaneous turns is a nice improvement. I am also happy that Creative Assembly included two shorter campaigns, Darkness & Disharmony and Something Rotten in Kislev (3 Players Max). Assigning units in your army to other players makes for some fun battles throughout a campaign as you strategize over voice chat.

Network stability can be an issue when playing a co-op campaign. If load times and disconnects persist, it can become tedious after occurring repeatedly.

In general, the TWW3 multiplayer experience is a solid one. The options for setting up maps and customizing your army for each race are robust. Since I have not played with the Grand Cathay and Ogre Kingdoms factions in the single-player campaign yet, I chose them in multiplayer. It was quick to throw a roster together for several matches. 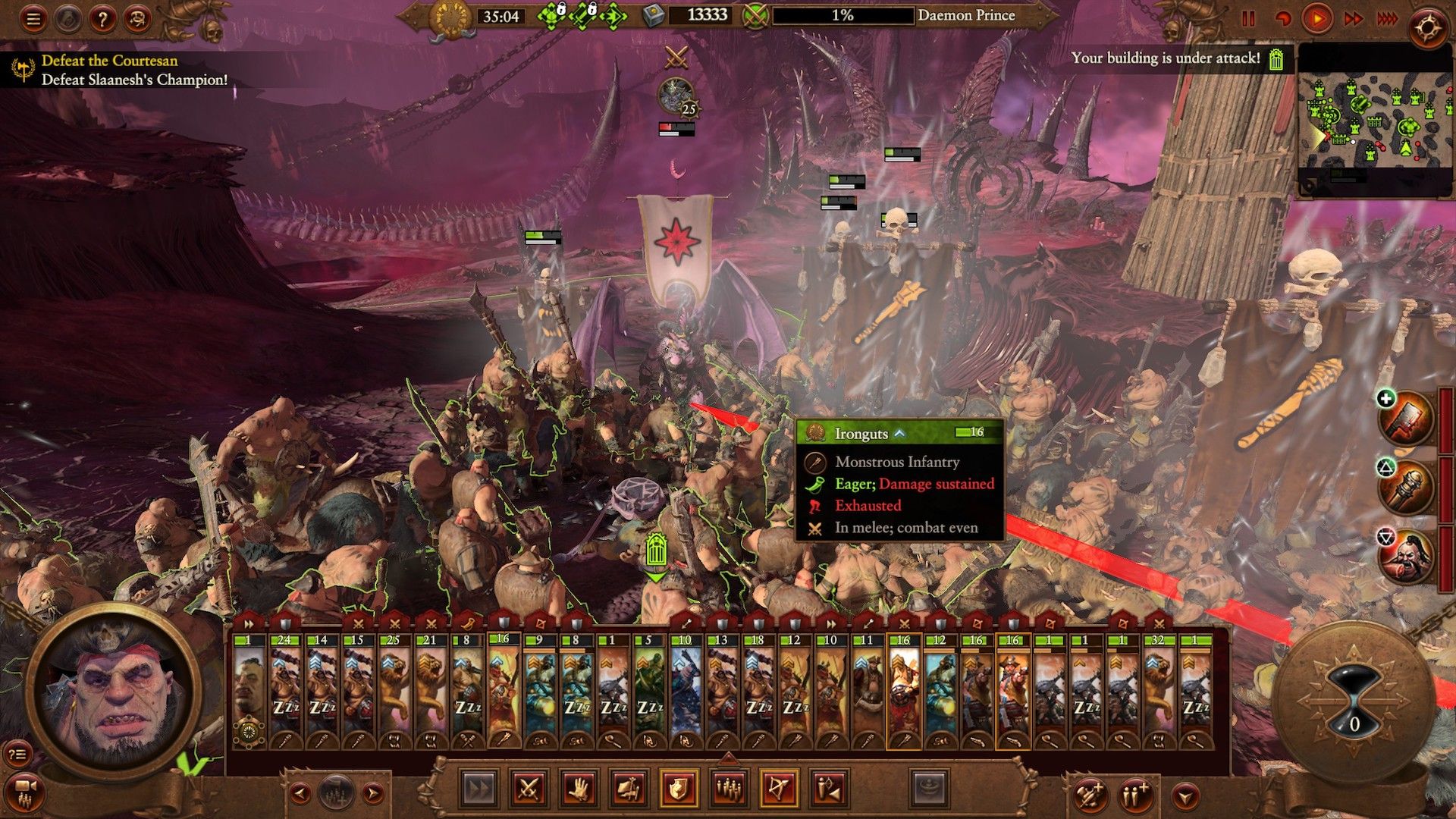 For those curious, I had fun with Grand Cathay, and they had a good mix of units, but I didn’t see much of a chance to use the faction’s Harmony ability in multiplayer. Ogres Kingdoms are where it is at right now, though. While the Ogre armies have few units, I found this made it easier to micromanage the battle more efficiently. Most of the Ogre units are also tougher when compared to other base units. In the tabletop, to offset the power of Ogres units had a chance each turn to spend it standing stupidly in one spot. I don’t think an equivalent debuff effect is in TWW3. At least not one I have noticed in multiplayer.

The multiplayer menu system is easy to understand once you are used to the options and various map choices. There is also a random option to generate your roster and map. Players familiar with the previous entries will quickly notice many familiar options/features. I did run into a couple of game crashes when I alt-tabbed out of fullscreen, but this is a known issue and is corrected by running the game in window mode.

Creative Assembly has done a great job with the final entry in the series. I am really enjoying Total War: Warhammer III, but it may not be for everyone since specific mechanics, like the spawning chaos gates, could become tedious for some players as the campaign progresses. The story could also not resonate with some players. I personally have enjoyed the prologue and campaigns, but I could see it missing the mark depending on how interested someone is in the daemons and the Choas Gods. The game does have some technical problems, and I am a touch disappointed with parts of the enemy AI. But the single-player story, new features, and solid multiplayer offerings are top-notch. If you are a fan of the previous games or this genre, this is a must-play title.

PR provided a copy of the game for the purpose of review.