Admittedly, I’m not very familiar with Yakuza Kiwami 2’s predecessors, but I was extremely excited to pick up this gorgeous action-adventure to plant my feet in Kamurocho for the first time. If you’re in the same boat as me, Yakuza Kiwami 2 is Sega’s newest remake for the series available on PlayStation 4, Microsoft Windows, and Xbox One. Since I haven’t been able to get a hold of a console during the pandemic, I settled to play through Kiryu’s (the main character) story on my PC with a Logitech gamepad controller. After all, “real Yakuza play with a controller.”

I wasn’t sure just what I was getting myself into when I started up Yakuza Kiwami 2, but I wanted to immerse myself in its gameplay without much previous knowledge or bias. What I wasn’t prepared for, was a lengthy refresher on the previous games and their lore. 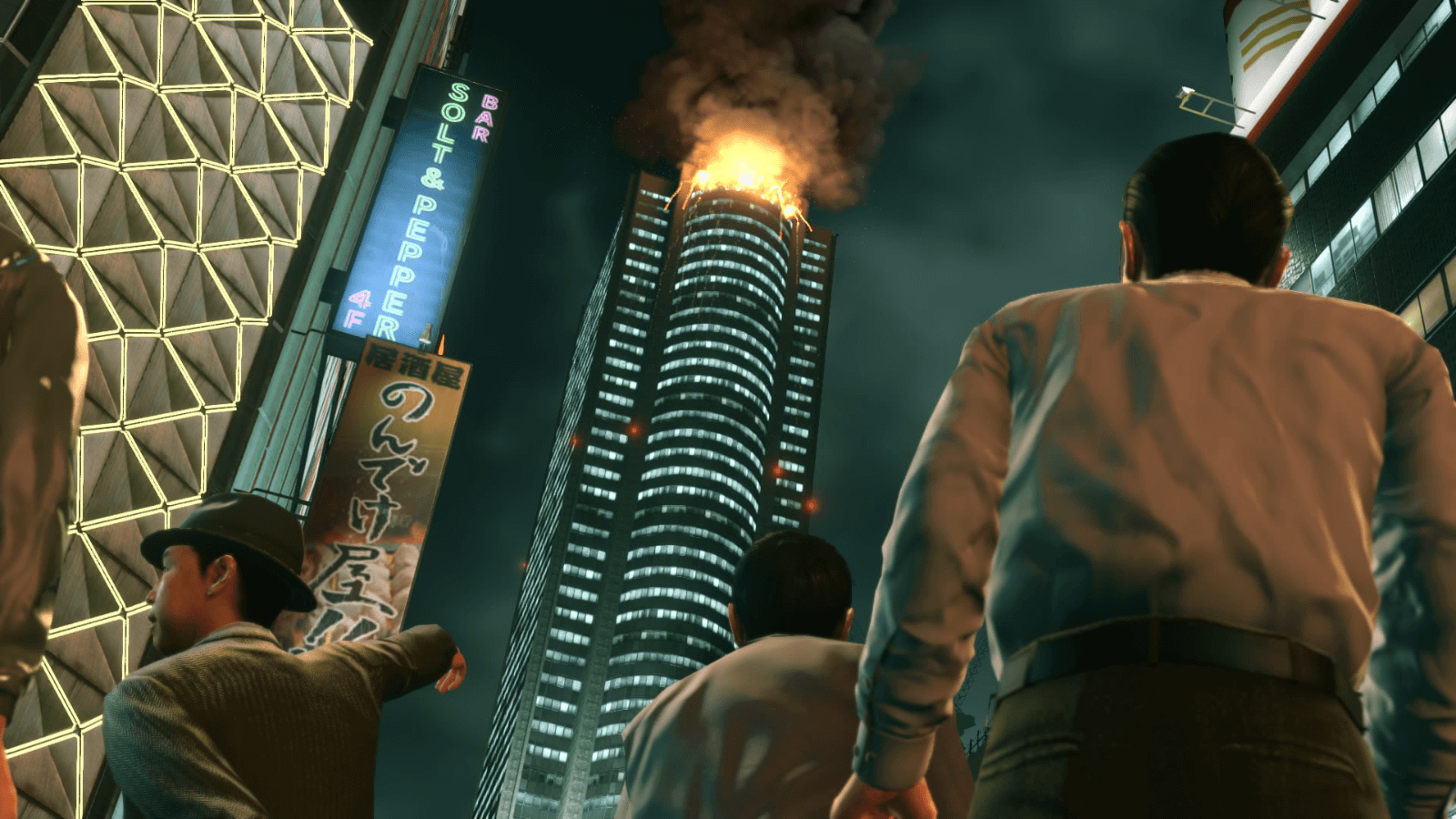 Upon starting a new game, the player is met with a plethora of cutscenes meant to orient you with where our protagonist, Kazuma Kiryu, has been since he left the life of a yakuza and the Tojo clan behind. A lot of the names and current events didn’t hold much relevance for me, until we proceeded into the graveyard to pay our respects.

Cutscenes from the previous games have been remastered in what I assume is the same Dragon game engine, and helped to fill in a lot of those missing gaps. As I wasn’t familiar with the lore, I sat through all of them, and was pretty thoroughly engaged by the time they were done. Even though I was still lacking some context about little Haruka tagging along with us, I knew enough to feel like I wanted to protect her and make sure she had a good life. Unfortunately, one doesn’t leave the life of a yakuza so easily. The Tojo clan is in disarray after the assassination of the fifth chairman, and Kiryu has to travel back and open old wounds in order to prevent an all out war between the East and the West yakuza clans.

Welcome Back to Kamurocho 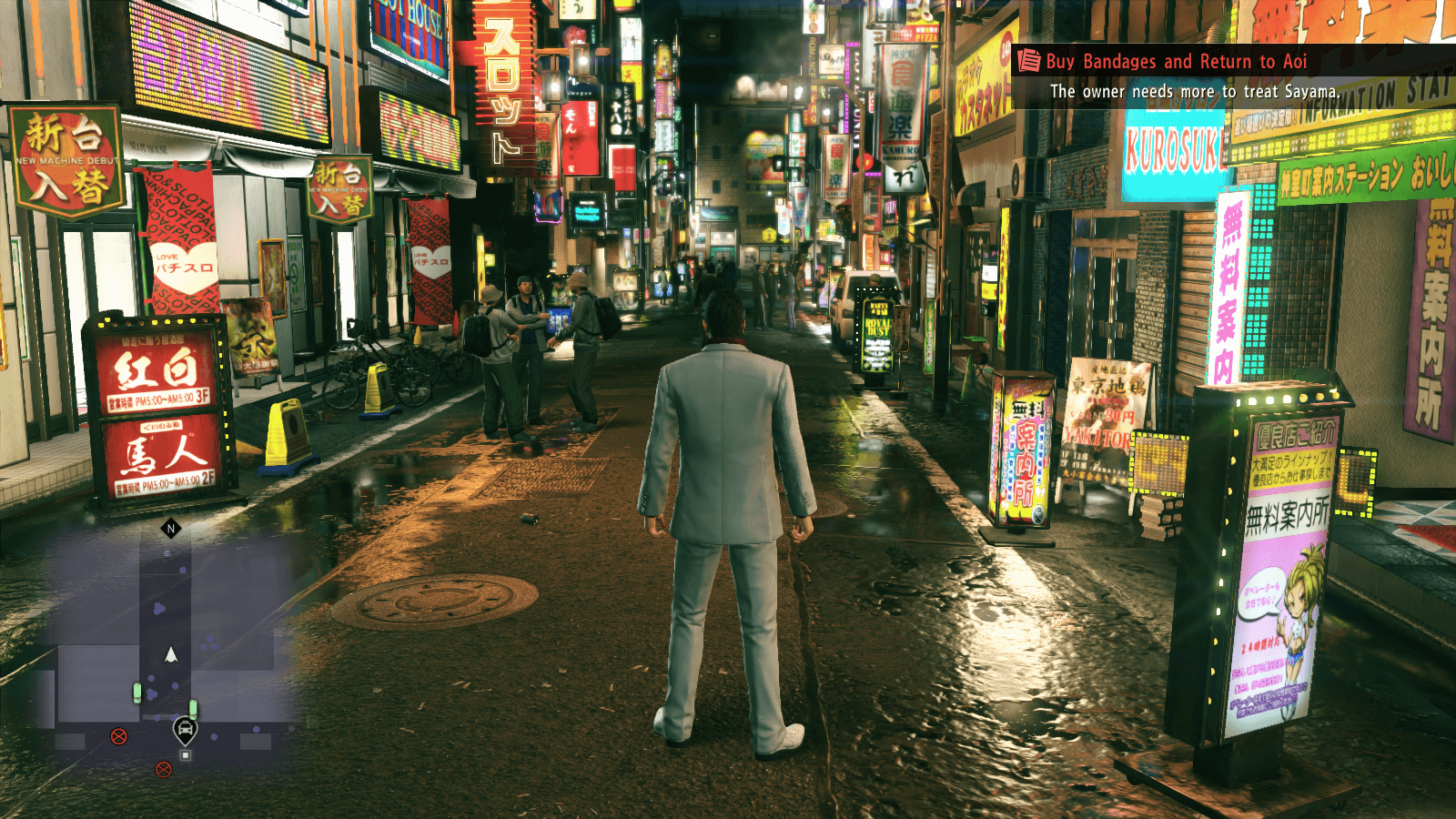 That first stroll through the city streets is absolutely magical. I’ve never felt so completely immersed in my surroundings with all of the brightly colored shop windows, sidewalk details, and constant flow of people through the streets. If there wasn’t a small mini-map to tell us where to go, I could very easily lose myself in the amount of storefronts and businesses that look real enough to enter. There is virtually no way to tell the stores you can interact with, with the ones that are just there to look pretty without the map, and I kind of love that.

Who Brought a Bike to a Gunfight?

Nothing is ever easy for our main man, Kiryu. It seems like everywhere he turns people are looking to pick a fight or cause problems just because he has a severe case of resting b*tch face. He doesn’t want the life of a yakuza, he’s downright sick of it, but he doesn’t back down from a fight and neither do I. 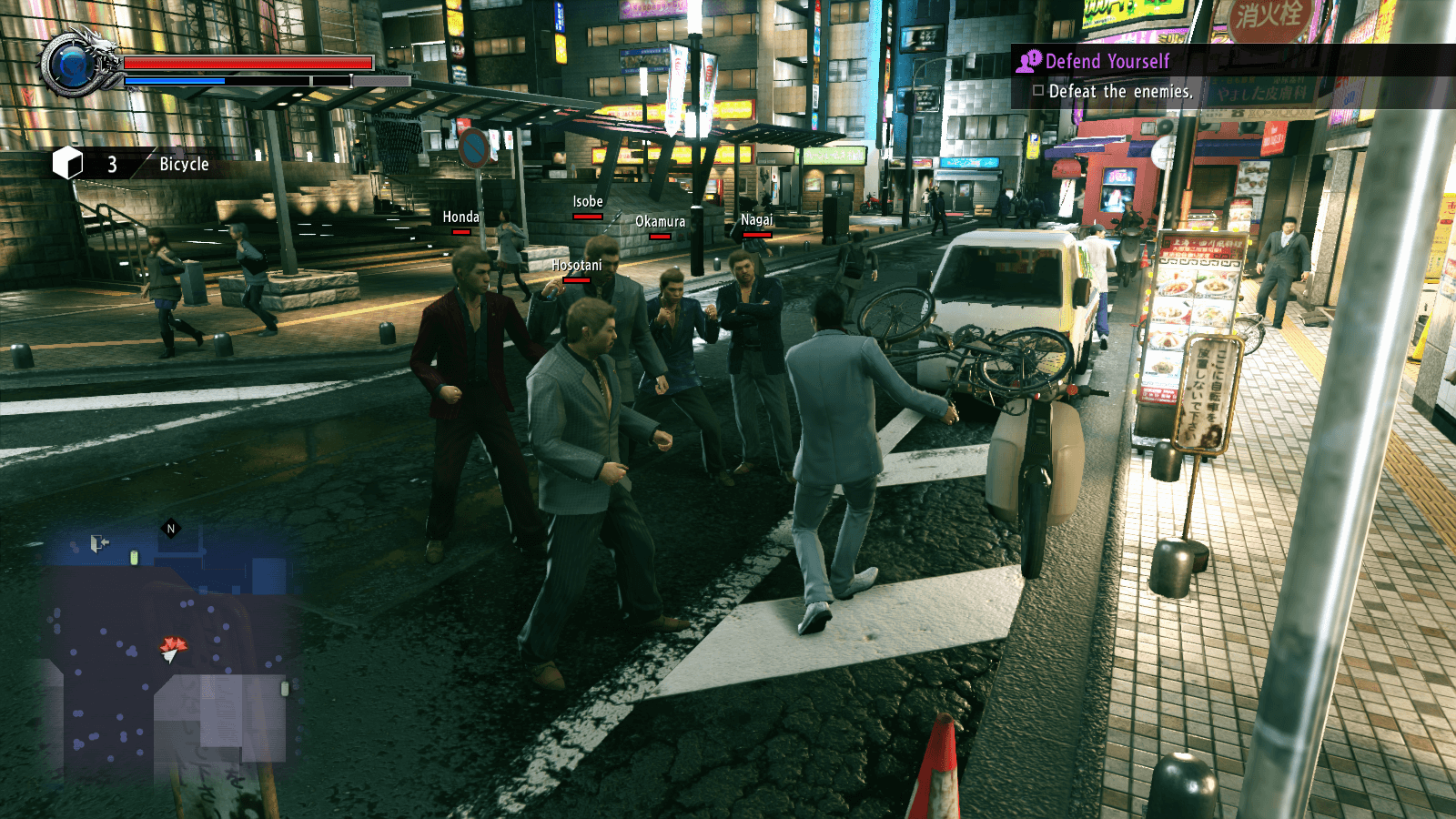 Combat in Yakuza Kiwami 2 is an interesting dance between the classic PS2 arcade style and the smooth combos of the Dragon engine. I knew something felt a little bit off when I was fighting, but I couldn’t quite put my finger on it until I looked at some older PS2 footage for comparison. Yakuza 2 was a bit snappier, crisper in its style of fighting, almost like you were playing Street Fighter but with free motion.

Yakuza Kiwami 2 brings more fluidity to your combos; like each hit has purpose and weight behind it. With that being said, dodging can feel sluggish at times. If you want to attempt to dodge the more challenging opponents, you’ll need to keep an eye on their proximity. Watch their movements to learn how many hits are in the combo they’re about to pull out on you so you know how far to get out of the way. Just because you dodge that first hit, doesn’t mean the other 5 won’t connect. 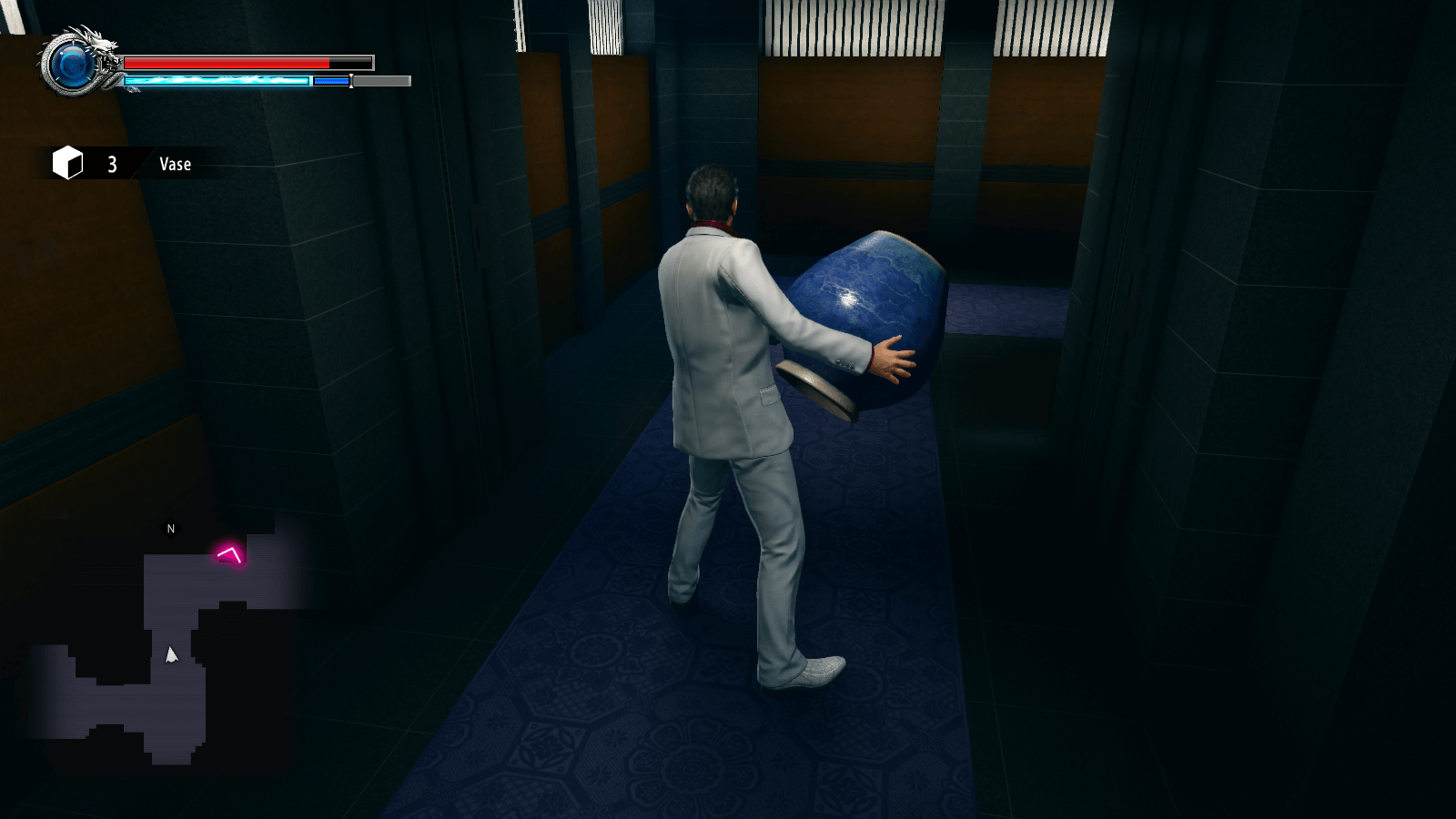 On the other hand, street fights are insanely fun. I can’t count the number of times I’ve picked up a nearby bicycle and swung it around to do massive damage to a thug that didn’t like the color of my suit. It’s just a nice touch that I wasn’t expecting to see and love to utilize whenever it’s available. A really satisfying moment came from the rescue sequence in the Omi Tower, where you could pick up the priceless vases and artifacts situated throughout the area before smashing them over the heads of your adversaries. Yes, I’m that person. If there are pots in a game, I’m going to break them. The cutscene previously alluded to how many of the artifacts were valuable collectibles to the Omi Alliance, so it was satisfying to get a little payback for the Tojo clan.

Recuperate in a Realistic Ramen Shop

After you knock some sense into the riff raff outside, you can stop by any of the available restaurants in the district to purchase a delicious meal or snack. I have to be careful to not do this on an empty stomach, because I’ll spend Kiryu’s money like it’s nothing. All of the thumbnails look so appetizing and tempting that it’s hard not to want to spend all of your hard-earned money on the priciest plate on the menu. 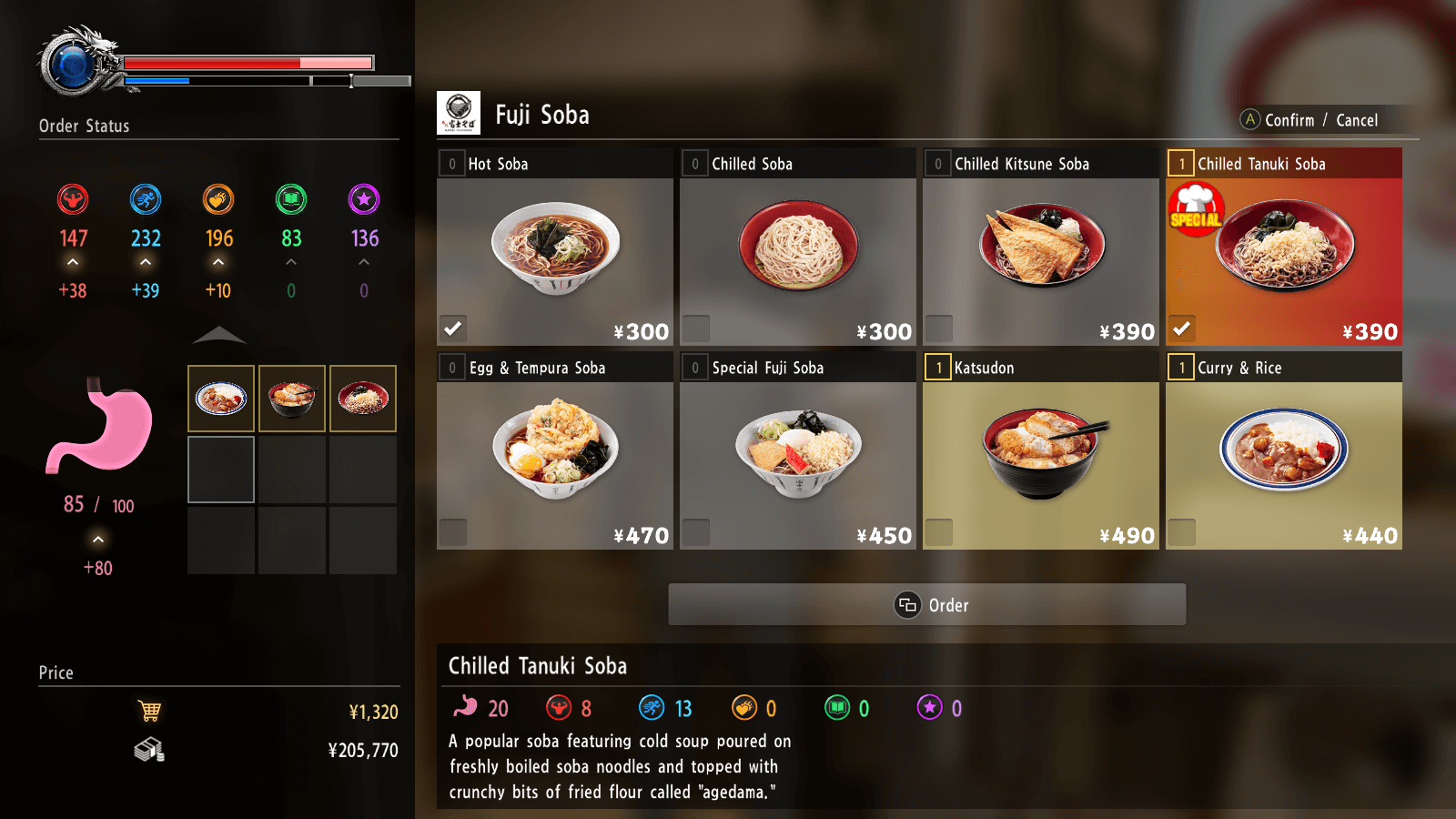 Each meal rewards you with skill points that can be used to unlock powerful combos or social bonuses. There are even vending machines that sell drinks with a limited-time buff. One of my favorites is the drink that convinces other thugs that you’re tougher than you look. After you whack them with a trash can, they drop more money because they think you’re some new yakuza boss. I really love this game. 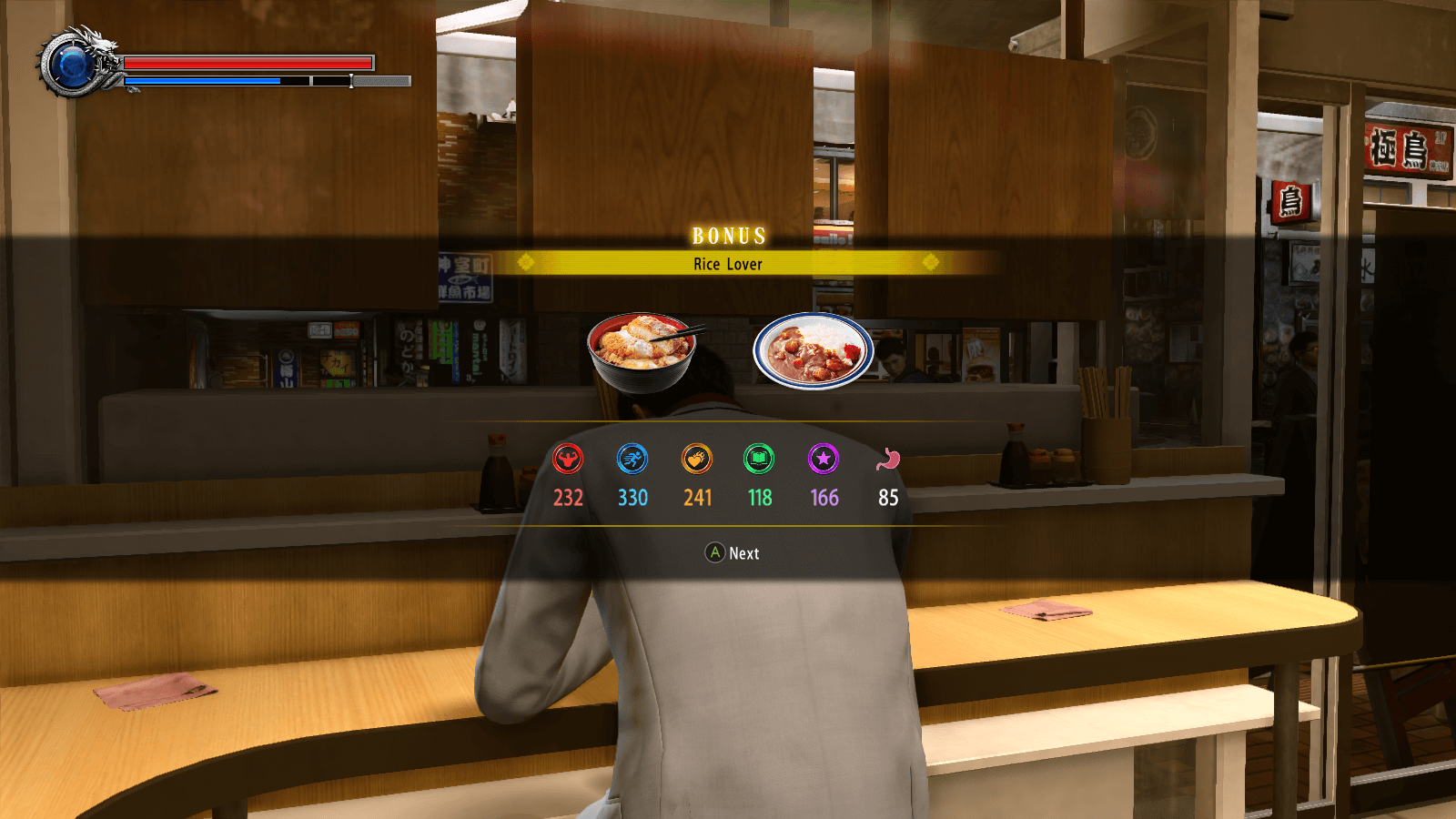 You can store a lot of consumables in your inventory for later during long periods of combat. In fact, I’d really encourage this. It saved my butt when it came to my first official boss fight against Ryuji Goda, the “Dragon of Kansai.” Goda is the son of the current leader of the Omi Alliance, but carries a temperament one can only assume he got from his mother, because his father only wishes for peace between the clans. A coup ensues, and it’s up to Kiryu to put Goda in his place. Goda doesn’t carry the title “Dragon of Kansai” for nothing. Even as your first fight, he’s a tough cookie to bake. Luckily, if you packed away a few cans of tea and bowls of ramen you can chug inbetween punches, you’ll probably eek out a win just fine, but it won’t be the last you see of Goda.

Take “Toylets” for a Spin

A main feature of Yakuza Kiwami 2 has to be the minigames. Just like the restaurants, minigames hide in plain sight, blending in with the vibrant lights of Sotenbori. There’s an arcade with claw machines and a robot arena-fighter if you want to play a game inside your game, as well as some related side quests that show a more human side to Kiryu. 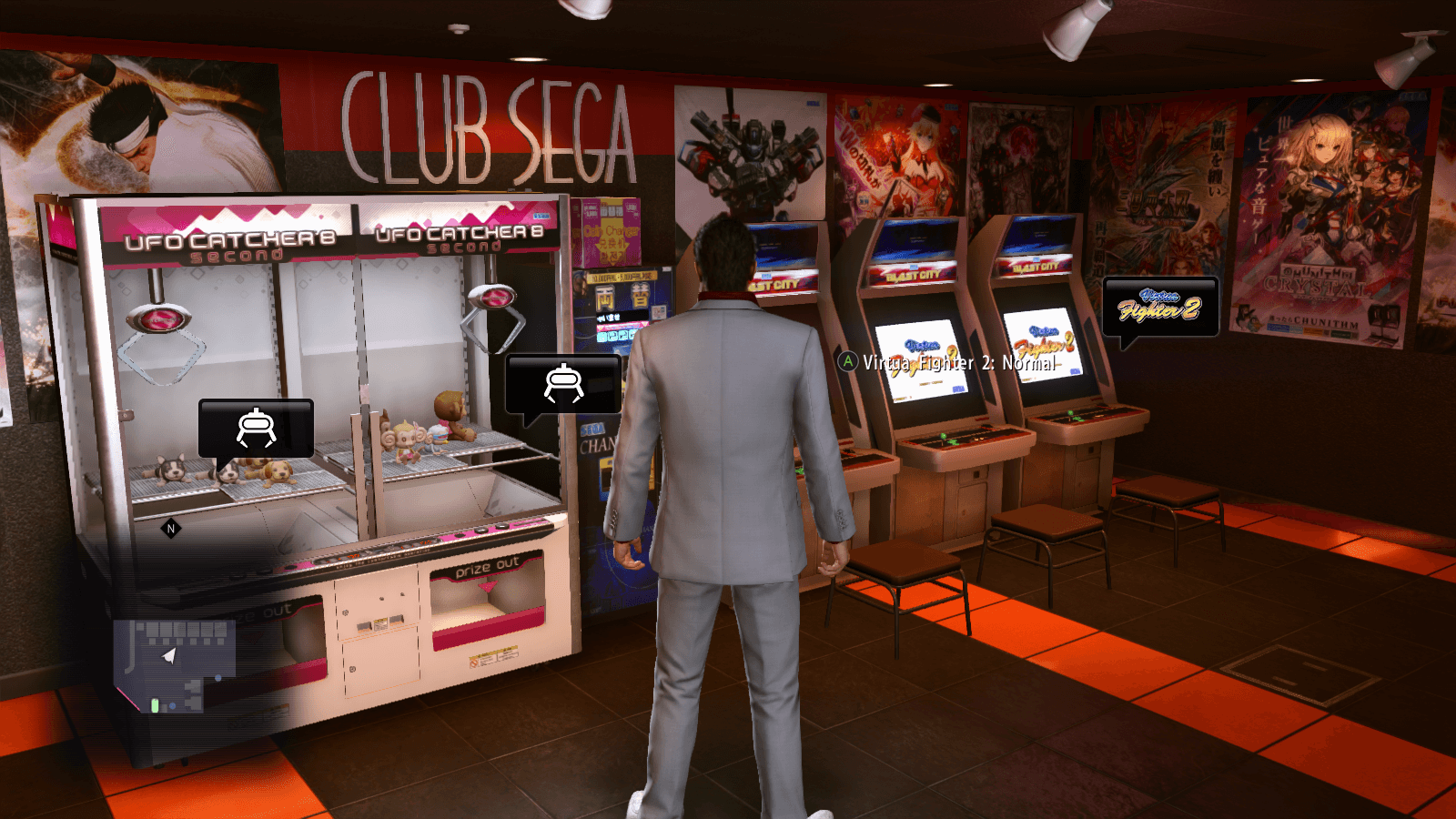 In that same arcade you’ll find yourself scratching your head when you find Kiryu engrossed in yet another minigame when he walks into the bathroom. “Toylets” as the enthusiastic entrepreneur called it, is a mini game that promotes hygiene and cleanliness by encouraging you to “aim” during your routine bathroom visits.

Probably most notably, there’s a karaoke bar that features a delightful selection of songs where you have to match buttons to the rhythm to sing. There’s nothing sillier than a yakuza singing off key. There’s so many minigames to lose yourself in while Kiryu roams the streets of Japan, and they’re a great way to unravel yourself from the intensity of the main story. Yakuza Kiwami 2 is a crime-drama game, so the tension is almost always cranked up to a 10 during the story. It’s just nice to take a break every once and a while to explore the sights and play a few games to earn some rewards.

Yakuza Kiwami 2 is a beautifully crafted fighting game, with a little bit of something for everyone. The drama and struggle of Kazuma Kiryu stuck with me long after I put the game down to focus on other tasks at hand. My mind kept drifting back to my current place in the game, and what I would aim to accomplish when I logged back in. I could very clearly see the bright lights of Sotenbori, and looked forward to traversing the streets at my own pace while knocking some sense into a few thugs for some extra cash. 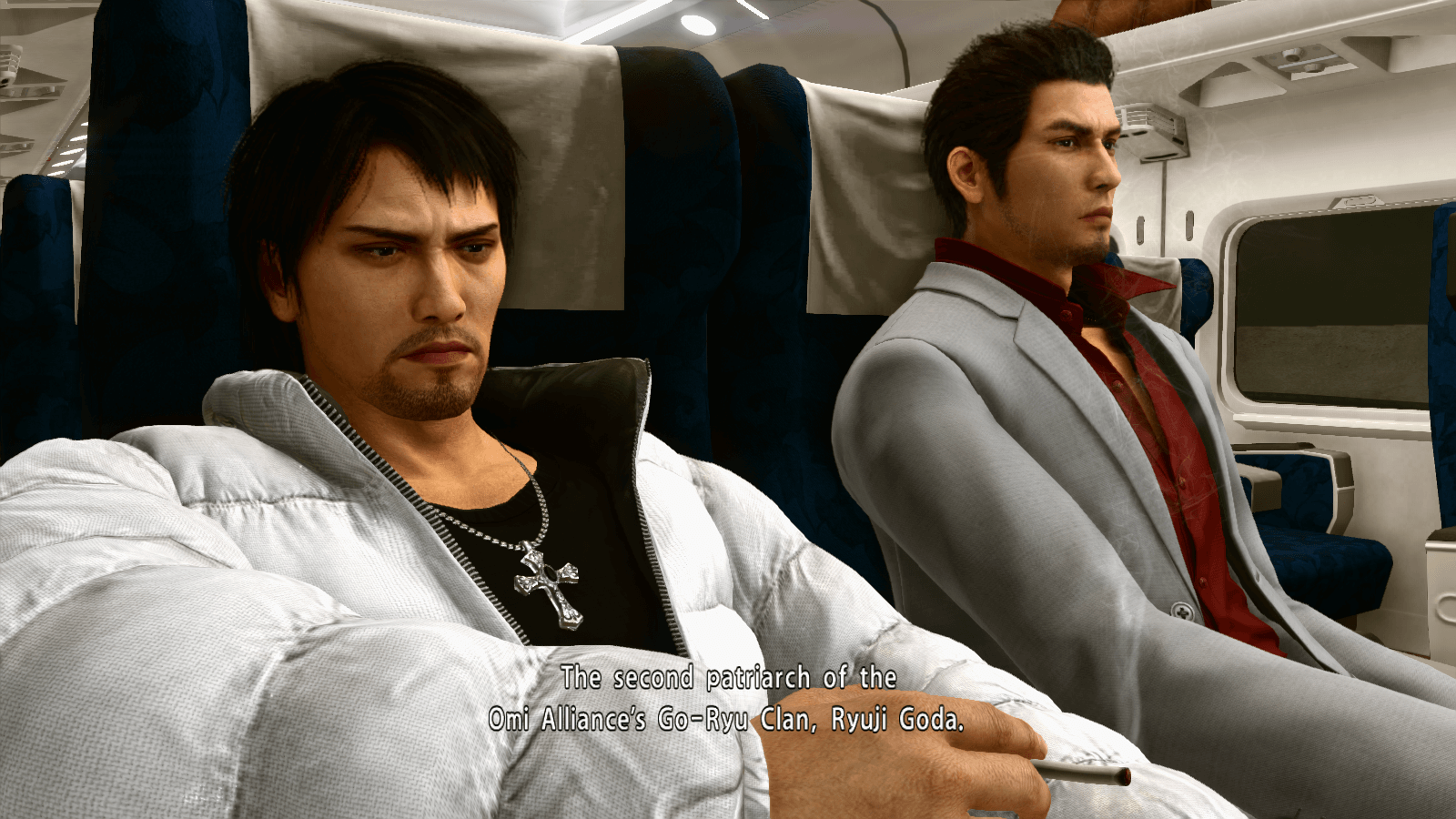 Yakuza Kiwami 2 has a funny magnetism that I haven’t experienced in a long time. It’s not a game that I felt pressured to make progress in or play, because I enjoyed every second. For me, Yakuza Kiwami 2 is a fantastic standalone game since I had no prior experience with the series. I think it says a lot for a game to be able to hold its own without relying on nostalgia of previous titles, and Yakuza Kiwami 2 can definitely stand on its own two feet.