The latest from Cyanide Game, the studio that brought you the popular Styx games, is a brand new game based on the tabletop RPG IP Werewolf: The Apocalypse.  For those that aren’t familiar with the world created in the role-playing game, it isn’t a simple human/werewolf transformation experience; they aren’t even called werewolves.  The basic premise of the tabletop game is that players are characters known as Garou and they fight to save the world from the titular Apocalypse.  It’s a supernatural reflection of our world with vampires, spirits, fallen Garou corrupted with apathy and violence working to bring an end to the world in which the Garou are essentially the immune system of the planet.  Reading through the base content is a really interesting experience but we aren’t here to discuss the lore, necessarily, but the translation of this world into a video game.

In Werewolf: The Apocalypse - Earthblood (from which now on I’ll simply call Earthblood) you assume the role of Cahal, a Garou in a self-imposed exile for basically losing his damn mind in a fit of rage and killing a friend, who finds himself back with his pack to fight off an evil company laying waste to his former packs lands.  There’s no character creation, which even in these story-based games I find disappointing, and after some cutscenes, you’ll find yourself in a tutorial designed to introduce you to game mechanics and the preface of his exile.   I’m not going to touch on the story much at all because I know we have readers that don’t like those kinds of spoilers but I will say it is a mix and match of both predictable tropes and a uniqueness that is likely influenced simply by the world created by the original role-playing game’s universe.

The cutscenes you are shown seem to be a mix of both pre and real-time rendered scenes.  It’s nothing new and there are tons of games that have done it but with the graphics quality issues I’ve seen it’s a jarring transition.  Remarkably there are a few times where the pre-rendered cutscene looks objectively worse than the ones that follow it in real-time and the change in consistency during the same chunk of the story is a bit disappointing.  It would have been better to stick with one or the other. 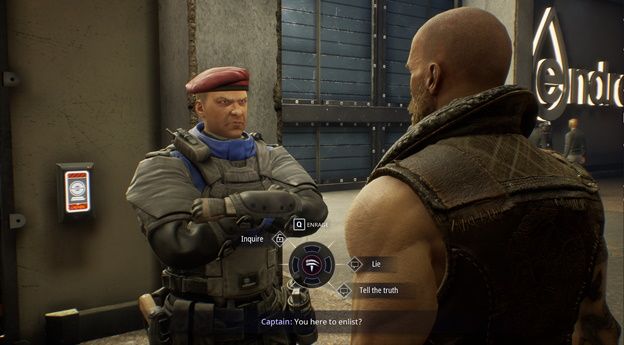 The discrepancy between Cahal’s model and textures and the NPCs you interact with is quite pronounced.  By comparison, the NPCs look very sub-par.

On the topic of graphics, it seems to be a mixed bag in Earthblood.  The environments are detailed, if not a bit repetitive, and everything runs smoothly on my 2080ti at 1440p with everything cranked up to 11.  The modeling on Cahal is detailed, gritty, and clearly at a high polygon count.  Sounds great, right?  Well, the problem is that, just like the cutscenes, there is a discrepancy in quality when it comes to the NPC characters. Even the main NPCs you interact with are not up to the same level.  Their movement appears stiff and unnatural and the lower texture resolution causes them to stand out like a sore thumb against Cahal and the environment.  Additionally, during the real-time cutscenes, the NPCs talking is the classic old-gen face texture with a mouth opening that moves while the voice audio plays.  If the game was made at the end of the PS3 era or the beginning of PS4 it would be a different conversation, but in 2021 on the heels of games like Horizon: Zero Dawn, Death Stranding, and Cyberpunk 2077 it’s a disappointment that harms the immersion of the game.

Before going further I do want to touch on the various mechanics and abilities of the player.  As Cahal, or any Garou I suppose, you have a few different forms you can take.  First, you have a human form that can be used to silently take down enemies or shoot them with a crossbow from afar.  The second form you are introduced to is called “The Lupus” which is essentially a standard wolf with the intent to sneak around without being noticed, like moving through air ducts, and can also sprint when moving long distances.  The form I was most excited about, given the title of the game, is ‘The Crinos’ in which you transform into a full-on werewolf to attack enemies, leap great distances, and even pick up and throw humans around like ragdolls.  In this form alone are another three stances, with their own abilities.  The agility stance results in faster movement, faster attacking, and a dodge that moves you quit the distance.  You can on-demand switch between this stance and our second, the heavy stance, which ups your ability to absorb damage and gives you more powerful, but slower, attacks.  Build up enough fury in these stances and you can switch to the final stance: Frenzy.  Frenzy combines the best of agility and heavy stances at the cost of disabling your abilities (like your ability to heal) and locks you from returning to your human form until your fury runs out.  Going into the game I thought this was going to be a lot to juggle but it turned out that it all feels pretty natural to switch between and adds some interesting combat decisions to make during gameplay.  These are all supplemented by a simple skill tree designed to augment your preferred style. 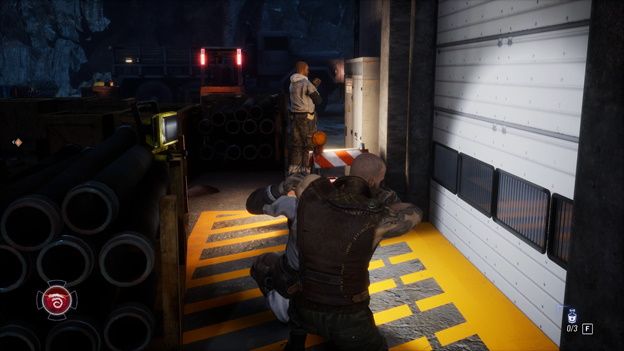 Sometimes brute force isn’t the best answer and you can utilize your human form for silent takedowns.

Earthblood is a game that is a mix of stealth and combat.  When it comes to those types what I usually expect is if I fail to be stealthy I would find myself in a situation where I am forced to engage the enemy, usually with a large percentage of failure due to overwhelming forces.  Because of this, I found myself very surprised when, instead of facing overwhelming odds when I was detected, I simply saw a screen that told me I had failed and gave me the option to revert to the last checkpoint.  To be quite honest I don’t remember the last time I came across this type of mechanic and found it to be antiquated.  And really for the first portion of the game, I found I could only really do what the game wanted me to.  I HAD to be sneaky when I wanted, I couldn’t change to my Crinos form at will, and was wound back for being detected more times than I care to admit, even with the addition of “penumbra vision” which behaves similarly to Aloy’s earpiece in Horizon: Zero Dawn, allowing you to see which cameras are connected to computers and enemies through walls.

Luckily everything seemed to open up in the choice department eventually (though for gamers with short attention spans this takes entirely too long) and I was able to satiate my bloodthirst and transform myself into my hulking werewolf form and proceed to splatter the walls with human remains when I felt like it.  I was happy to find it as a dialogue choice at one point as well to simply rage out instead of going through talking points with an NPC I really couldn’t stand to look at.  It is in this combat that Earthblood has knocked it out of the park.  Once you can hit that Crinos form it’s like an entirely different game.  For most gamers graphics don’t matter as much if the actual gameplay is fun which is why I found myself more often than not forgoing the stealth nonsense when I could and engaging the enemy instead. 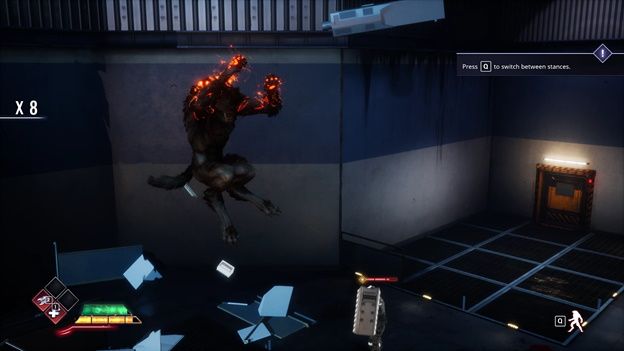 Being a giant wolf has its upsides. In either stance, Cahal can leap into the air and smash down on his opponents in a thunderous collision.

Weaving between the various stances of Crinos form while you fight is exhilarating, to say the least.  Most enemies are fodder for your agility form but the shielded enemies require some extra oomph, and as waves of backup come pumping through in combat situations you won’t have a choice but to switch between these two stances wisely.  When it comes time to clear out the room by using Frenzy it does take some consideration if you want to use it.  The loss of your abilities can majorly impact you in a negative way.  There are times you need to leap to guys shooting you with silver bullets (lowering your max health) or use your heal ability when you fail to dodge too many shotgun blasts and if you’re in Frenzy too long and the hits keep coming you can find yourself quickly out of commission.  Smashing through a bunch of little humans is fun and all but boss fights were my favorite experience.  It’s nothing like a Dark Souls level of difficulty or anything but there are abilities you need to dodge and moments when things get hairy.  But locking on and engaging a single enemy for a length of time allows the combat mechanics to shine and isn’t something I can simply post a screenshot of and say “look how great combat feels”.  Below you’ll find a video of the first boss fight of the game where you can hopefully see that it’s fast-paced, impactful, and feels good.

I do not doubt that there are going to be mixed feelings about Earthblood once more people get their hands on it.  Some are going to be able to look past the shortcomings of the graphic quality issues, the linear, non-open world game type, and find it a worthwhile experience.  There most definitely will be those who can’t and will bash the game every chance they get.  I can’t say for certain where I stand.  When I watch a cutscene and see some of the face textures pasted on NPCs while they talk I audibly groan and can’t believe what I’m seeing in a game with a 2021 release date.  However, I find myself drawn back to playing to both experiences the unique combat styles and find out what happens next to our protagonist.  At the end of the day, Earthblood is one of those games that is great in some regards and not so much in others.  Luckily it’s also not a game that’s releasing with a $60 price tag at launch, because at that price I wouldn’t be able to recommend it off-sale.

Earthblood will be releasing on the Epic Store at $35 for the base edition, which is a price I can sink my teeth into.  I’ve had fun and been entertained by the game enough to personally consider it worth the $35 price tag despite the aforementioned issues, and really if the studio deems it worth their time all the issues I have are things that can be patched out.  So is it the perfect game? No, unfortunately, it is not.  But if you like werewolves, are familiar with the original Werewolf: The Apocalypse universe, or just want to hulk around as a giant wolf throwing people around like ragdolls then it might be worth your time.