Video game producer Tomoya Asano has done it again with Triangle Strategy. This time, instead of another high-definition 2D turn-based RPG, like his previous works Octopath Traveler and Bravely Default, Triangle Strategy is a tactical RPG that combines compelling narrative, meaningful player choices, and a rewarding combat system.

It’s been nearly 25 years since Square Enix released Final Fantasy Tactics, which is considered by some to be one of the greatest Final Fantasy titles despite not being part of the main series.  Even though the spinoff series had two sequels, from the very beginning, Triangle Strategy felt more like a spiritual successor to the original than the Final Fantasy Tactics Advance games. Finally, we’re thrust back into a dark medieval fantasy setting where the stakes are high, and death is around every corner.

While Triangle Strategy might feel like Final Fantasy Tactics, it diverges from it in two main ways. The first being that the player’s actions and decisions can have a monumental effect on the story. The second is that the class system has been simplified but focused, and random open-world battles have been removed.

The story begins 30 years after the Saltiron War surrounding the three kingdoms of Norzelia: The Kingdom of Glenbrook, Duchy of Aesfrost, and the Holy State of Hyzante. Each kingdom has its own strength and political system. Glenbrook controls trade through the use of waterways and represents a typical caste system. Aesfrost controls the iron mines to the north and is a Duchy but has a capitalist economic system where the people dictate much of the power and wealth. Finally, Hyzante is a religious state controlled by the teaching of the ‘goddess’ where almost everyone is treated equally.

The main focus is on Serenoa Wolffort (son of Lord Symon Wolffort, leader of the strongest house in Glenbrook) his bride to be Frederica Aesfrost (sister of Archduke Gustadolph Aesfrost), Prince Roland of Glenbrook, and their party of supporters. With the discovery of a new iron mine in Glenbrook, the three kingdoms are supposed to be united in the endeavor to usher in a new era of peace and prosperity for all. As expected, things don’t go quite as planned, and Serenoa is thrust into the middle of a triangle-shaped conflict. 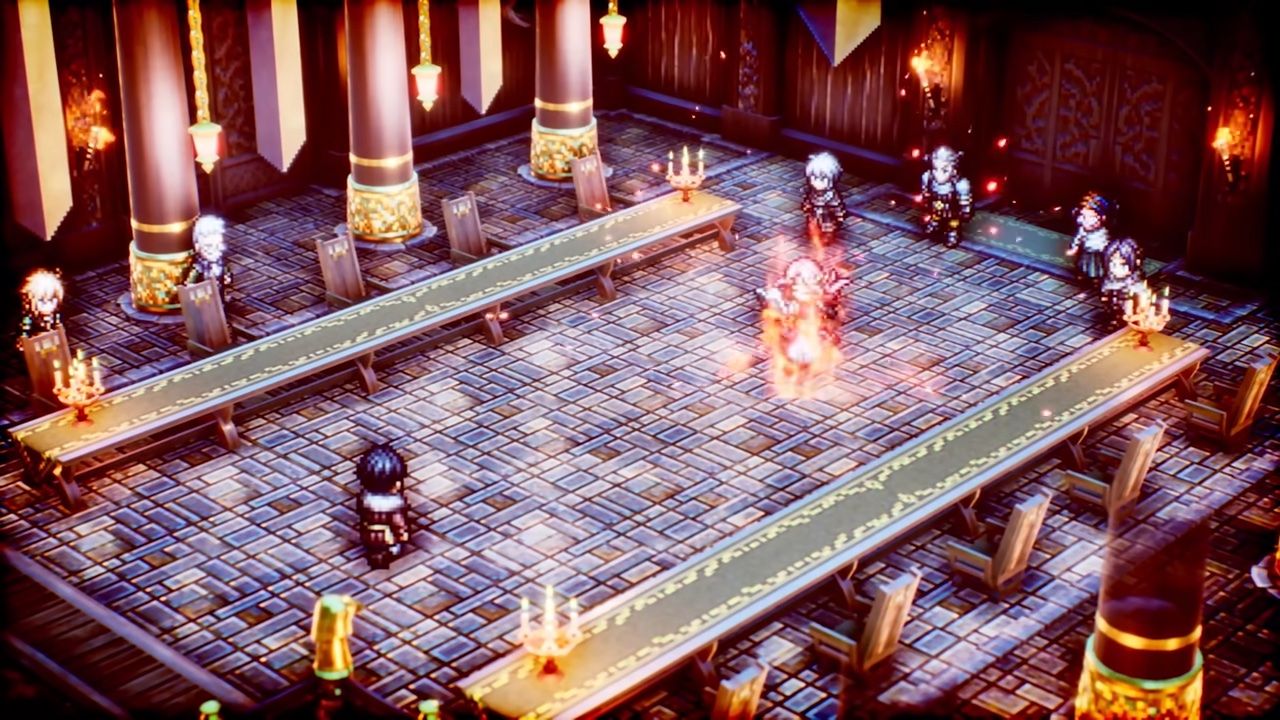 One of my favorite aspects of Final Fantasy Tactics was how compelling the story was, despite Ramza’s presence being almost entirely behind the scenes. Huge battles were raging between the different kingdoms and religious factions and your group was mostly unnoticed despite essentially saving the world. In Triangle Strategy, Serenoa is much more directly involved in the conflict at hand and (depending on your choices) the outcome of your battles can shape the direction of the war. Being able to partake in large, grandiose battles in addition to smaller, strategic skirmishes is a welcome addition.

Finally, I found the significance of player choice to be incredibly rewarding. Most actions and choices in Triangle Strategy revolve around three conviction values: Morality, Utility, and Liberty. Usually, dialogue choices or taking a specific path will build these convictions, but even minor things can have an effect, such as selling goods for profit to raise Utility.

The importance of conviction levels is twofold. First, major decisions in the game are voted on by your party. You can sway your party through dialogue, but your convictions' strengths can determine your level of influence. It’s entirely possible for your party to vote against your wishes if you’re not leveled enough in certain convictions. The second is that optional characters will become available to your party once your reach specific conviction levels. Having a diverse party is incredibly important due to terrain and positioning providing distinct advantages and disadvantages for certain roles.

While the narrative themes might have similarities, the party management and combat systems deviate from Final Fantasy Tactics. In the former, much of the party was comprised of generic squires who would eventually branch out into various talent trees based on your choices. Even Ramza could become whatever you wanted, even a dual-wielding summoner.

Conversely, Triangle Strategy’s classes more closely resemble Fire Emblem’s progression, where characters simply become stronger versions of their current classes. For example, Serenoa will go from Swordsman to Swordfighter to Swordmaster after hitting certain levels and using promotion medals. Additionally, you can upgrade weapons and basic attributes with materials, and each character has access to an ultimate skill of sorts after unlocking their final weapon tier.

Although limiting, this class system is a bit refreshing compared with more open-ended systems. Most importantly, it allows players to have access to a wide variety of roles that can be used in battles that fit their fighting style. If a bunch of enemies are going to be bunched up then bring mages. Have the high ground? Archers are best here. This minimizes the risk of getting stuck with a bunch of suboptimal classes due to poor choices made earlier in the game. 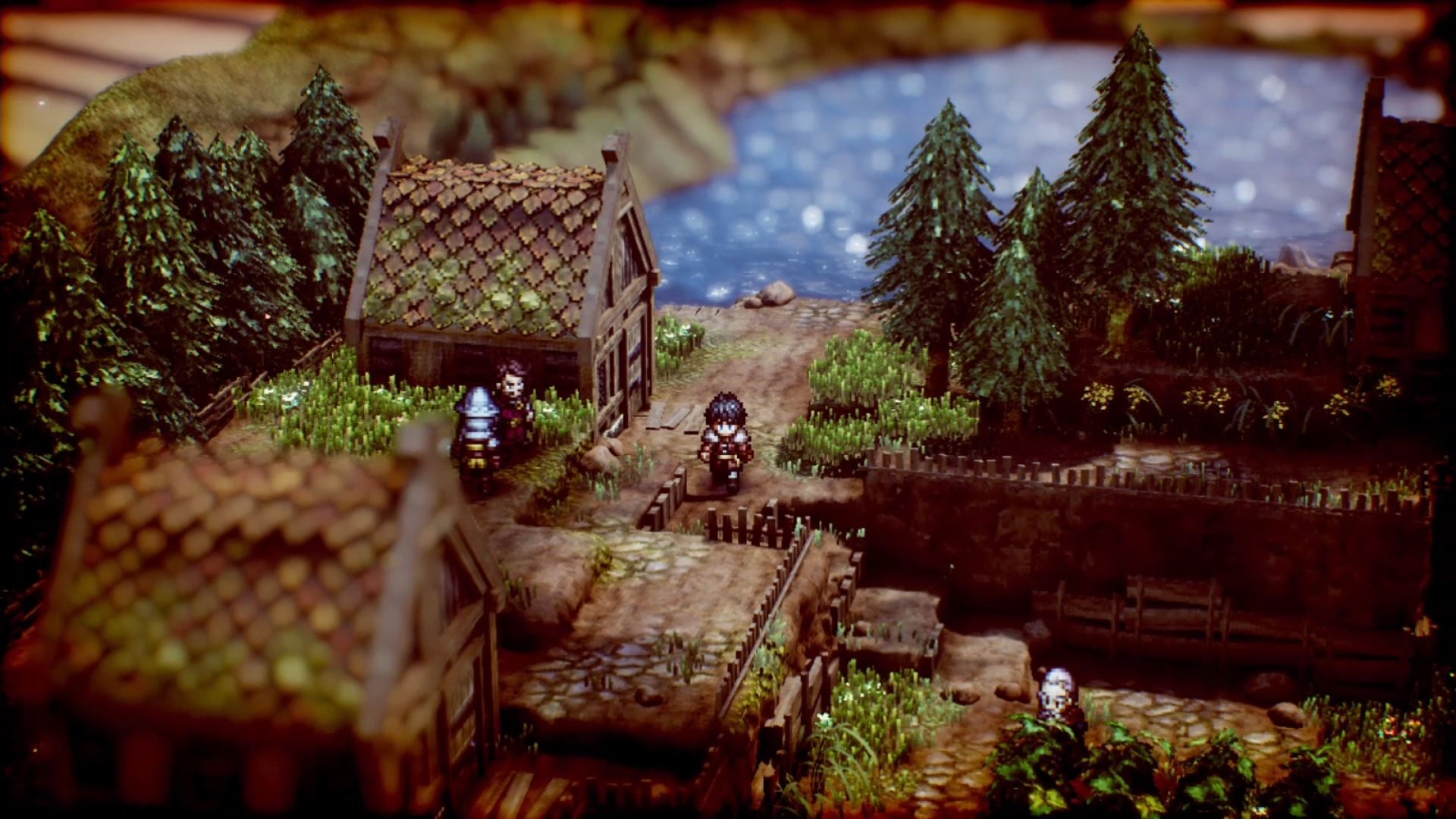 Unfortunately, this also requires leveling up more characters than you normally would. Thankfully, the mock battles, which are the main way to grind, typically require more units than standard battles. This allows you to level up an extra couple of characters each fight.

This leads into the next key point about Triangle Strategy: you don’t physically move around a map and there are no random battles. Instead, the world map is always the focus and there will be exclamation points that you can interact with. These will tell you where the next main story will take place, and often there are sub-events that provide context for your allies and enemies. Before you interact with an icon, it will give you a hint as to whether it’s part of the main story, exploration mode, or a battle.

Always knowing what to expect, and not unintentionally walking into another long battle while just hoping to continue the story, was a breath of fresh air. The exploration mode provides further context into what the people in an area think about the war, allows you to find hidden items, and can help prepare strategy for the upcoming battle. However, if you want to actually train your characters the barkeep provides access to Mock Battles, which can be repeated for experience and items. Even though it’s a bit of a shame you can’t move freely around the world of Norzelia, being able to grind on demand is very convenient.

The combat itself is very satisfying and encourages using strategy above all else. No matter how strong my team got, the game always punished me for rushing in headfirst. Pickings the correct characters, positioning, timing, understanding the terrain or specific map mechanics, and correct use of skills are all incredibly important.

At a basic level, Triangle Strategy plays similar to most other tactics-style games. You move your characters like chess pieces and once they arrive, or prior to moving, you can either attack, wait, or use an ability or item. Instead of using mana to cast skills, each character uses Tactical Points (TP). At the beginning of each battles, characters have 2 TP and typically gain one at the start of each turn. Initially, 3 TP is the max and as characters are promoted this can expand to 5. Managing TP is just as important as anything else but this is especially true for mages as most can’t use damaging skills with less than 2 TP.

In addition to normal attacks, your characters can do combined attacks if you have an ally on the opposite side of your attacking character. This is one of the main reasons rushing ahead with 1 or 2 characters will often lead to defeat; if an enemy surrounds your character, they’re done for. Finally, there are also Quietus spells available, which are global spells that can only be used once per battle and range from a simple heal to reviving characters or delaying an enemy’s action. Obviously, using these correctly can have a dramatic effect on a battle.

Triangle Strategy focuses on delivering a deep story with an emphasis on player choices and dealing with the consequences of those choices. The amount of narrative between battles might be too much for some players, however, it’s also what makes the game stand out. The combat and class systems are relatively straightforward but rewarding in their own right. Finally, with four different endings and multiple different paths throughout, Triangle Strategy will make you keep coming back for more.