The Last Hero of Nostalgaia, the Souls-like adventure from indie developer Over the Moon, is set to release on PC and the Xbox family of consoles on Wednesday, October 19th. I was a little hesitant to take on a Souls-like game for a review - I enjoy the genre, but I suck at them - but with the team’s past success of storytelling with The Fall, I decided to throw caution to the wind and take on the challenge. Is the combat good? Does having a story make a Souls-like better? Did I even make it past the first boss? All of this, and more, will be revealed in our The Last Hero of Nostalgaia review.

Once upon a time, Nostalgaia was a wonderful game world. Each cycle, a hero would spawn to prove their mettle in battle. The narrator would chronicle their journey, and once the hero had saved the land from peril, their power would be returned to the Heart of Nostalgaia, and the world would reset with a new hero taking over for the next cycle.

All was well until a new breed of hero came along. These heroes refused to relinquish their memories. They hoarded the power they had gained, refusing to release it back into the world. Unable to fully reset because of these heroes, the world of Nostalgaia has become corrupted. NPCs are being generated from incomplete source material, lacking the motivation or skills to execute their role effectively. Weapons and armor have lost their memories, losing some of their special abilities in the process. Even the fidelity of the world has been affected; the once beautiful world is "derezzing" into a pixelated world that is on the brink of fading out of existence.

Our character enters this tainted world as a new hero. We spawn as nothing more than a pixelated echo of past heroes, with what looks like Pong paddles making up our stick figure body. The Narrator sees our degraded body as an abomination. Unwilling to accept our character as a true hero, the Narrator incessantly trolls us as we make our way through our altered story.

The map of Nostalgaia is very linear, but a big piece of the story is told by backtracking to areas you have already visited. In a show of master-class level design, the Over the Moon team has built in plenty of interconnecting shortcuts to link older areas with newer ones.

The world of Nostalgaia itself adds additional charm to the story. I generally dislike a low-resolution look and prefer a world that visually pulls you in. Given the story, the lower-resolution graphics are fitting. It’s a nice touch how some items in the world have degraded further, taking on a 2D look (similar to Paper Mario) instead of the 3D rendering of the main world.

Don’t let the unique setting confuse you; The Last Hero of Nostalgaia is a Souls-like adventure through and through. Players start by choosing one of five preset characters, each one favoring a specific stat - the Datadin (Vitality), Formatter (Strength), Resolutionary (Dexterity), Sourcerer (Source), and Randomaster (Luck). After choosing your class, you are presented with the character customization screen, complete with face and body sliders. You’re a stick figure, so the sliders obviously do nothing to change your appearance, foreshadowing the type of humor you will find throughout Nostalgaia.

Along with the five stats mentioned above, characters also have two additional stats, Stamina and Equip Load. As you accumulate memory from slain enemies, it can be spent at beacons to level up your hero’s stats. Each level costs more than the one before it, and since there’s never enough memory to level every stat, players must thoroughly consider the benefits of each stat as they grow in power. 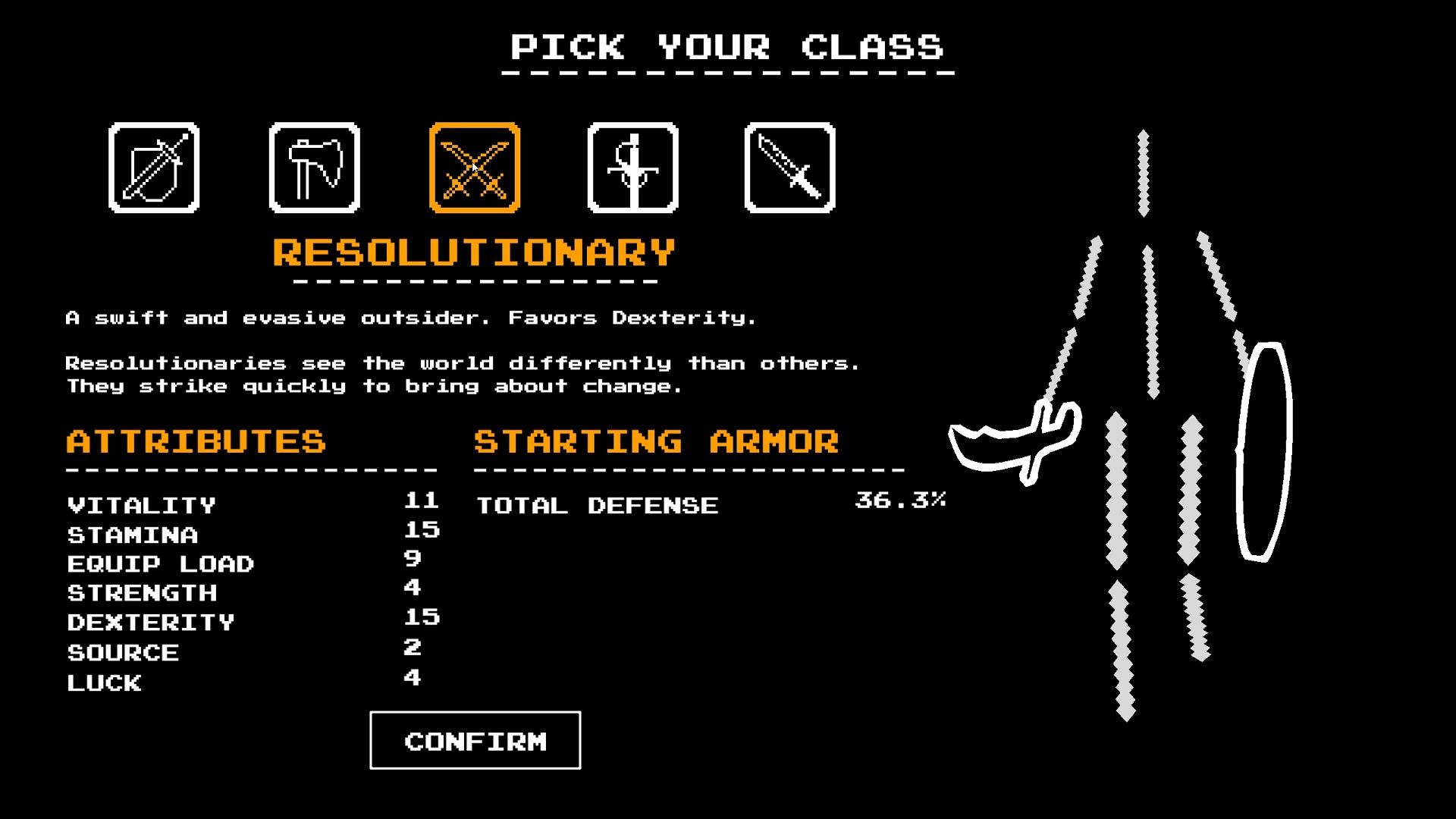 To further enhance your character, there are plenty of weapons and armor to find and upgrade. There are over 250 unique items to find as you adventure through Nostalgaia. That may not seem like a lot, but there’s generally a “best set’ of gear depending on your playstyle, and I practically used the same weapon throughout most of the game. Even though I didn’t use most of the equipment I found, I was always on the lookout for a new shiny. There are plenty of easter eggs from video game history, and not all of them are as obvious as the green Master Chef armor set.

Along with the typical type of upgrading where you spend memories to increase the general stats of your gear, some items also have lost memories that need to be restored. These relics come with a riddle in their description that hints at where the item can be restored. Taking the item to the designated spot allows you to reunite the piece with a memory from its past, unlocking a special ability such as increased stats or a special attack. Reclaiming the item’s memory also unlocks some of the story behind Nostalgaia, giving you a better understanding of the events surrounding the continually degenerating world.

One piece of Nostalgaia that I didn’t get to try out was its multiplayer option. We’ll have to wait and see if the multiplayer is as fluid as single-player, but I know one thing for sure - it is co-op only. Players can only join up through invite codes, so there’s no need to worry about someone joining and wrecking your experience (unless your friends do that kind of thing).

Being a Souls-like adventure, many of you probably couldn’t care less about a story and skipped straight to this segment to see if Nostalgaia is worth picking up. I wish I had a perfect yes or no answer for you, but the combat in Nostalgaia is a double-edged sword (pun intended).

When it comes to control, the combat is smooth and fluid. Movement is precise whether you use a keyboard/mouse combo or grab your favorite controller. Some may find the animation lock of attacking or dodging annoying, but the responsive controls allow you to immediately follow one with the other.

Your gear choices also affect your combat characteristics. Equipping too much weight for your character’s Equip Load limits your dodge ability and stamina draw. Each weapon has unique attack characteristics you can depend on being accurately and consistently represented, so once you get your timing down, your skill will be the one variable that needs to be accounted for.

For some players, the downside to combat will be the difficulty. Or lack of difficulty, to be precise. There’s still plenty of room for error, and if you don’t time your attacks correctly or fail to recognize an enemy’s impending attack, you will be punished. 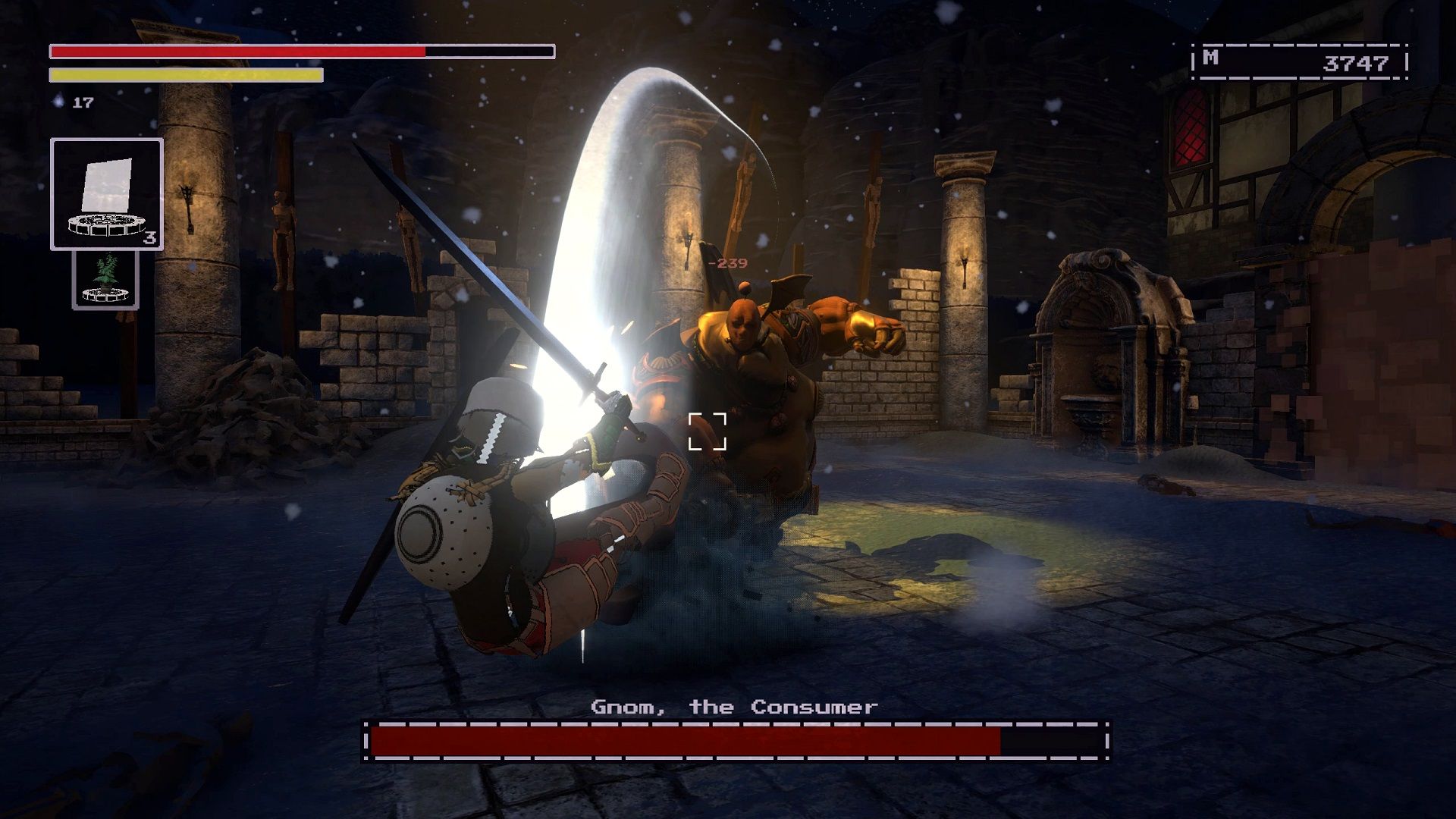 I hate the Boss Gnom

For anyone that can burn through boss battles in other games, the combat in Nostalgaia may be too easy to be enjoyable. To help drive this point home, I will tell the story of my trials with the second boss battle, where I just couldn’t get the boss below quarter health.

During my rage quit tantrum, my son walked in to see what was happening. A fan of the genre with hundreds of hours under his belt, he grabbed the controller and spent a minute testing the controls (and gave an approving nod for the layout and responsiveness) before heading into the boss fight. His first attempt wasn’t horrible, but it ended in defeat. He asked if I had any items that would add more stamina, which he then equipped. Three minutes later, he had slayed what I found to be the most difficult boss of the entire game. On his second attempt. Without any practice.

At the end of the day, the story is the one thing - the only thing - that differentiates The Last Hero of Nostalgaia from the rest of the pack. Everything else lacks any innovation. The names of certain elements (memory, beacons, etc.) may have been changed to match the theme of the storyline, and although character creation, progression, and combat are all done very well, they are all extremely by the book Souls-like.