I've been diligently playing the release version of Solasta: Crown of the Magister since about a week before it launched. I also played a bit during early access, which allowed me to see how much it changed during the early access period and compare that with the launch version of Solasta. This is, without a doubt, the most faithful adaptation of D&D into a video game I have ever played. Some other games might be a bit more polished or fancy in certain aspects, but none offer detailed implementation plus the freedom for the player to augment things to the same degree Solasta does. Beyond that, it's a great game, even if you aren't at all familiar with the tabletop version of D&D.

One of the strengths of Solasta is how well it threads the needle in the early game between giving enough information so even players who haven't played D&D before can follow along and not taking the tutorial so far that the beginning is boring for D&D veterans. The entire process of creating a character is clear and allows for a good amount of customization. There are even personality traits to choose that will change how the character speaks and responds to various situations. There's also a good stable of premade characters to choose from for players who want to jump right in without going through the character creation process. I went the route of creating one character I wanted to play and then filling the rest of my party with premade characters.

I appreciate that Solasta doesn't impose any order to what each character does when it comes to combat. Some games require movement, attacks/buffs/heals, and bonus actions to be done in a particular order which can be frustrating in many situations. Here, just as with playing D&D, I could do things in whatever order I wanted. Unfortunately, this did also mean that I would occasionally do things in a suboptimal order on accident. For example, there were more times than I care to admit where I attacked and then realized I could have moved my hunter's mark at the beginning of my turn because one of the other characters had killed who I had been targeting. Allowing players to make mistakes and learn from them is something that I always look for in games. 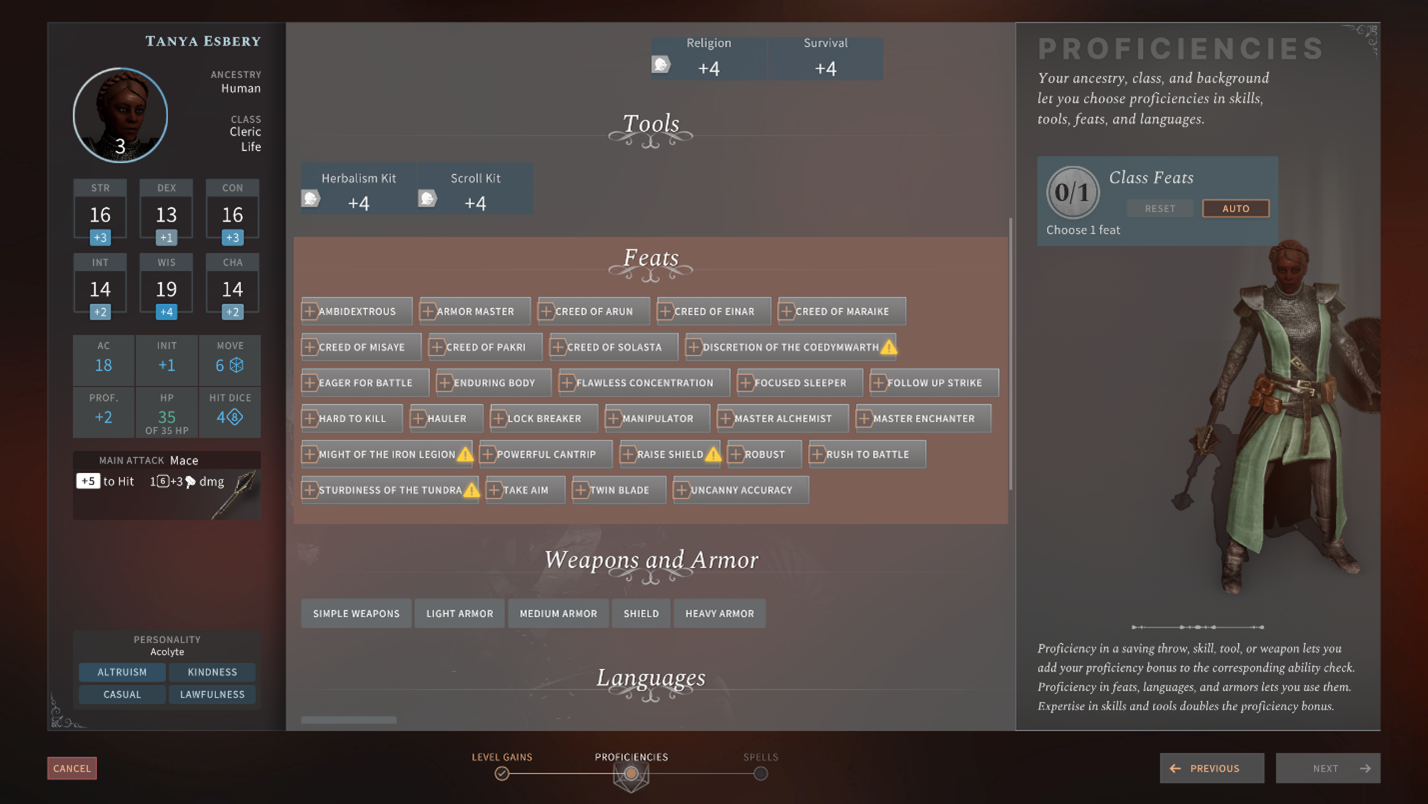 For the most part, the difficulty curve in Solasta felt very gradual and was easy for me to handle, but there is one exception to this. After finishing the opening tutorial sections of the story, when I set off to find the first gem, that's when fights suddenly got much more complex, and thinking tactically mattered the most. In fairness, before I set out on that quest, there was a popup that basically said that things were about to get more difficult, and if I hadn't upgraded my characters' gear, I probably should. Ignore this warning at your own peril because they weren't joking about that warning.

When it comes to exploring, looting is something most players of RPGs take for granted generally. Everyone knows you are supposed to loot everything. After all, you might miss some of the best rewards if you don't at least look in every sack and bookshelf, right? In Solasta, this can get you into some serious hot water. There was one point where I had successfully talked my way past someone who seemed formidable, and she was completely willing to let me see her master. Yay! But then I noticed she had a bookshelf, and when I clicked on it, there were some crafting recipes I wanted, so I took them. Strangely, Aksha didn't like me stealing from her at all. So that was fun. I like that there's no indicator in-game about what would be considered stealing, so I have to consistently make educated guesses and weigh the potential risk vs. reward. 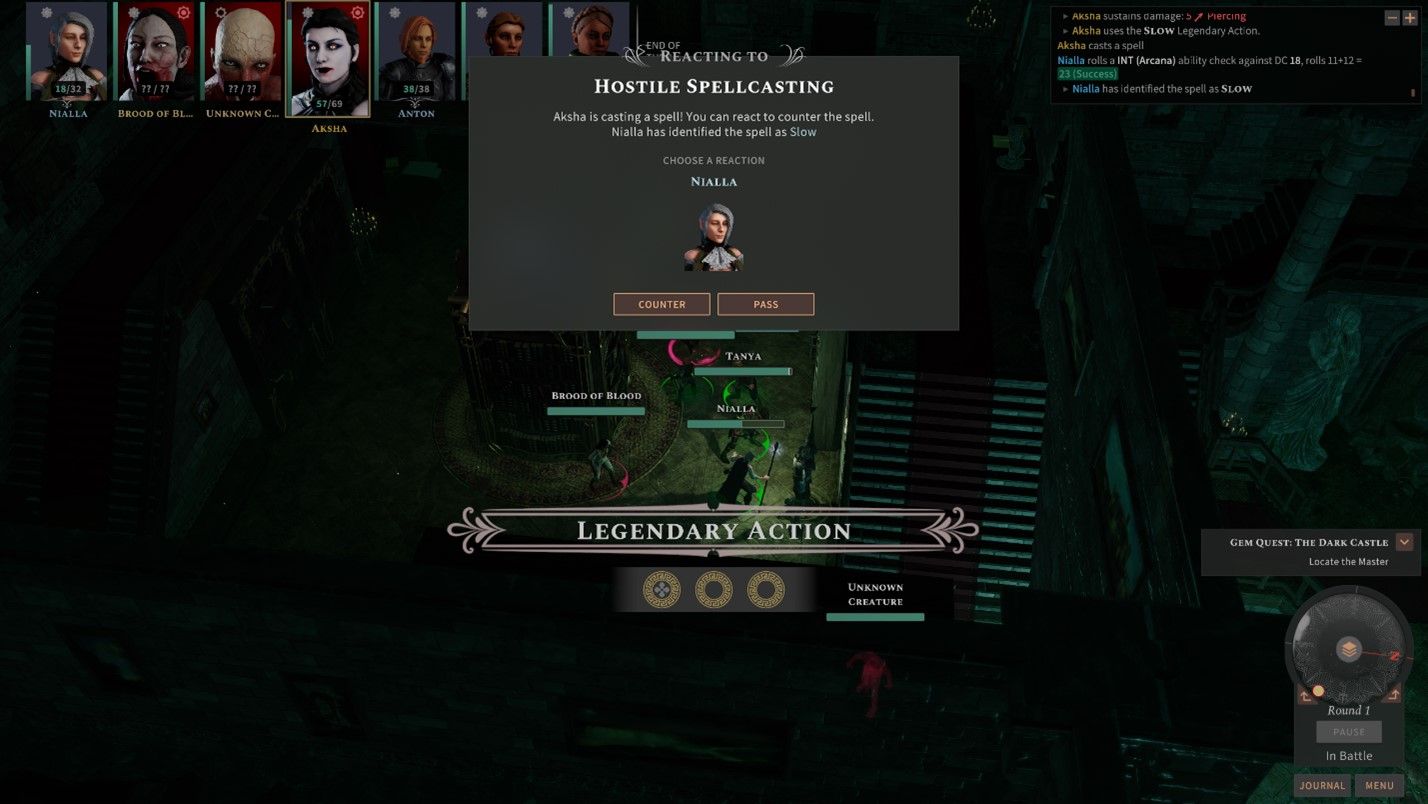 I did have some issues here and there navigating the various maps. The biggest problem occurred very early while I was wandering around the Library. I had the party climb down a ladder to a lower floor and then couldn't get them to climb back up afterward. I even tried reloading the game to fix it, but that didn't help. The fix ended up being hitting the up arrow on my keyboard to change what layer the view was on, and then it let me select spots on the higher floor as a destination. The Library is the only location where I ran into this particular bug, though, in the rest of the game, the camera adjusted automatically, or scrolling the mouse wheel did work as well.

One area where Solasta falls just a little bit short is in the animation department. Don't get me wrong, everything does look great, and I can tell a lot of work was focused here before launch to clean things up. However, some of the characters do still have a bit of a stiffness to their faces when they talk, and there's a lot of clipping going on in many cutscenes. None of this was bad enough that it made playing frustrating at all though, it's just something I noticed and can sometimes be annoying or unintentionally hilarious in other games (looking at you mercury eyes in SWTOR). 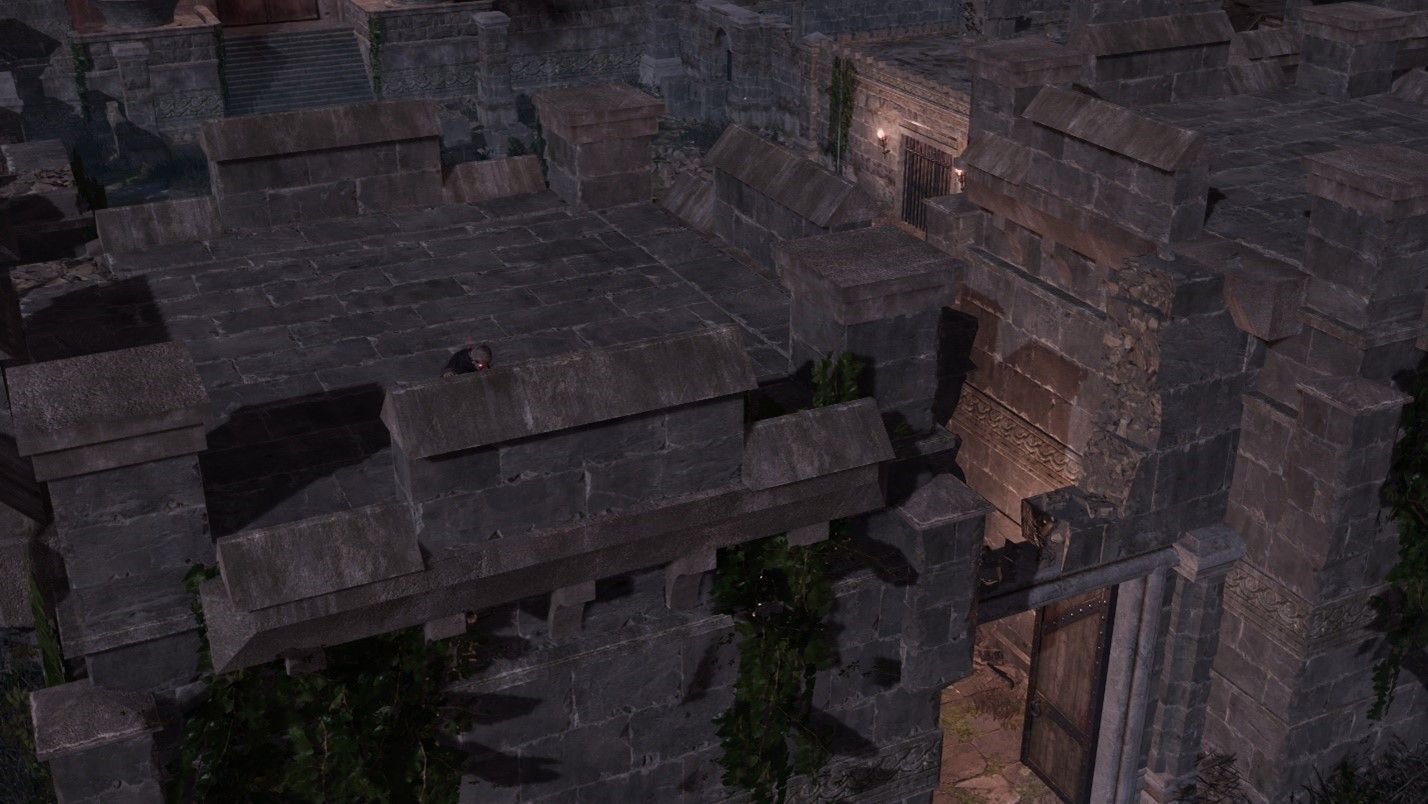 Anytime a game developer seeks to create a video game version of D&D, there are always a ton of compromises that have to be made. The way a tabletop game works is fundamentally different than how a video game works on many levels. By nature of that difference, a pure video game version of D&D is a challenging target to hit. One example of this is demonstrated with a Cleric wielding a shield in their off-hand. Rules as written says that the Cleric wouldn't be able to cast any spell which has a somatic component because they don't have a freehand to do this. It is a common practice of players in D&D games to drop the shield (free action), cast the spell (action), then pick the shield up again (bonus action). Making that work in a video game is pretty tricky, though.

First, consider having the option to do free actions as an option. Some free actions are easy to consider, like dropping a weapon or switching between two equipped weapons, but there's also a ton of others that are totally up to DM discretion. The push and pull between DM and players is part of what makes playing D&D in its tabletop version great. However, since this isn't a live game, many of these choices have to be made ahead of time, and it just isn't possible to predict every possible thing a player could want. So, my Cleric I mentioned earlier, the primary workaround is to have a weapon set with a shield and one without a shield. The characters can switch between weapon sets once each turn for free. This does, however, mean the Cleric would be sans shield for one round every time they switched it out. It isn't perfect, but it's very workable. However, Tactical Adventures has also offered an even better option to players. 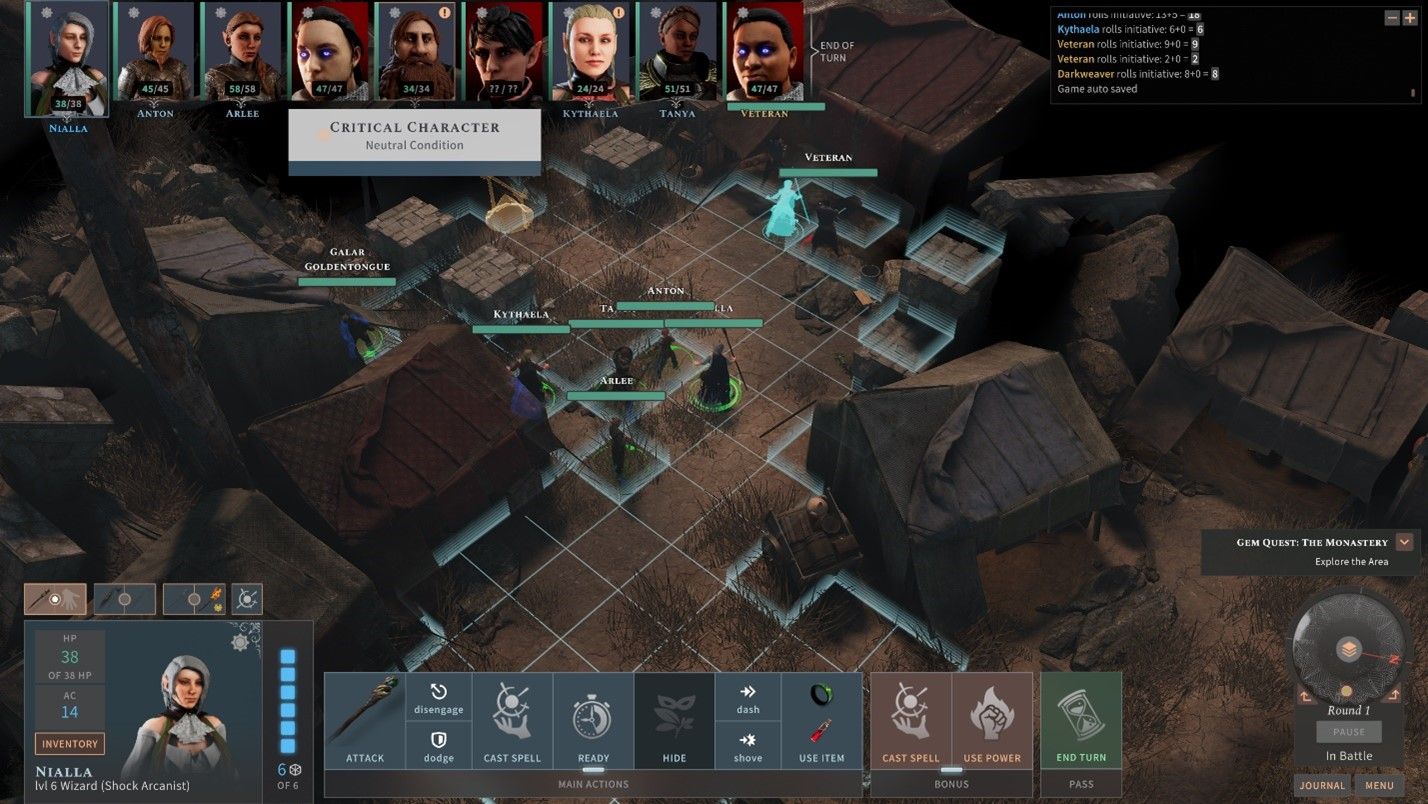 In addition to all the general difficulty options included with Solasta, there is a metric buttload of options for the various rule sets. This includes how magic is handled. Both verbal and somatic components can be toggled either on or off to fit the player's preferred playstyle. Material components have three options: Full, Expensive Only, or Disabled. Each setting is self-explanatory, and although some would probably complain that any option other than full would make combat too easy, I applaud the inclusion of these and other options so players can more closely set everything to how they are used to playing.

For example, the reason the case of my Cleric stood out to me as I have been playing with the same group for over ten years at this point, and we stopped bothering with the whole holding something in your off-hand you can't do somatic spells bit ages ago. So long ago, in fact, I forgot it was a house rule because we don't even discuss it; we all just understand that's how it works. Allowing players to shape the rules in the same way they would when sitting at the table with friends is what propels Solasta above every other D&D-type video game. Rules as fun is a critical component, as well as rules as written.

Solasta: Crown of the Magister is an excellent game for anyone who loves turn-based RPGs or D&D in general. Since there are so many options for difficulty and game rules, pretty much anyone can play it regardless if you want something easy to experience the story, something extremely challenging, or something in between. Additionally, although I did run into some issues early on, all of them got better as I moved further into the story, which is the reverse of most games that typically start super polished and get rougher as you move closer to the end. This isn't a game to sleep on.