Attempting to follow the critically acclaimed Assassin’s Creed Odyssey with a brand-new IP would be a daunting task for any development studio, and Ubisoft Quebec may have flown too close to the sun with Immortals Fenyx Rising. The studio’s newest action-adventure game simply borrows too much without creating its own memorable experience. Even with its shortcomings, however, Fenyx Rising can be an enjoyable romp in short bursts.

The game follows a young Grecian, Fenyx, who is always living in the shadow of their more heroic brother. However, with the escape of Typhon, a child of Gaia, from Tartaros, most of the heroes have fallen and Fenyx becomes the last hope for mortals and gods alike. If things weren’t bad enough, four of the most powerful gods, Ares, Athena, Aphrodite, and Hephaestus have lost their essence and been transformed into different sorts of creatures.

As players complete challenges to restore the gods to their former glory, three major blessings can be received from each while certain collectibles, such as Zeus’ lightning, can be used to upgrade stamina and health. While many of the puzzles are excellent brain teasers, there is little to the game that truly feels unique. Instead, we’re left with a mash-up of Breath of the Wild and God of War that seems more like a tribute, or perhaps a parody, than a unique experience.

One of the saving graces for Immortals Fenyx Rising is that it doesn’t take itself too seriously. Fenyx might be the hero of the story, but most of the narration comes in the form of banter between Zeus and Prometheus. The former has requested Prometheus’ aid, however, the chained titan ensures Zeus that a mortal (Fenyx) will save Mount Olympus. Obviously, Zeus has his doubts and anticipates Fenyx’s demise at every encounter.

Despite his negativity, and harsh critique of both Fenyx and his own children, Zeus does show a good bit of character development towards the end of the game. A bit of self-realization is a refreshing break from the comic relief the conversation between Zeus and Prometheus normally creates. With that in mind, the overall plot is not very strong and relies too much on pointing out the flaws of the Greek gods.

When we remove the story, we’re left with a massive open world riddled with puzzles and an engaging but relatively shallow combat system. Puzzles mostly come in the form of ‘Vaults of Tartaros,’ which function almost exactly like the shrines in Breath of the Wild. There are dozens of smaller vaults that typically focus on physics-based puzzles or guiding Apollo’s arrows around tight corridors.

My experiences with the smaller vaults is quite mixed, as expected. Some are intellectually challenging, while others are mechanically clunky and can become frustrating experiences. However, the vaults that contain the gods’ essences are massive and feel rewarding to complete.

For example, in Hephaestus’ vault, you need to control the wind to traverse a massive forge to relight its fires. It contains a nice balance of platforming, problem solving, and combat. There were many places in the vault where I had to stop and think about my next move, but none where I was completely stumped or thought a key component was completely missing. In other areas, there were a few challenges where I spent way too much time running around, only to realize an important block was hidden behind a destructible wall.

In addition to the vaults, open-world treasures and collectibles can be located by using the far-sight ability (preferably from on top of a god’s statue). Unlocking every single item in the world definitely clutters the map with all types of challenges, as one would expect from an Assassin’s Creed developer. This usually creates an efficient way to complete a few shrines or grab some upgrade materials on the way to finishing major quest chains. However, there’s definitely hours of additional content off the beaten path that should provide enough material to overcome any combat roadblocks.

Although I did enjoy most of the shrine challenges, I didn’t feel quite the same about the open-world puzzles. Most of them boil down to shooting arrows to light flames, moving blocks around, or killing a mini-boss. By the end of my playthrough, these became more tedious than anything, and this is extrapolated when players are forced to complete multiple ‘Myth Challenges’ in a row. 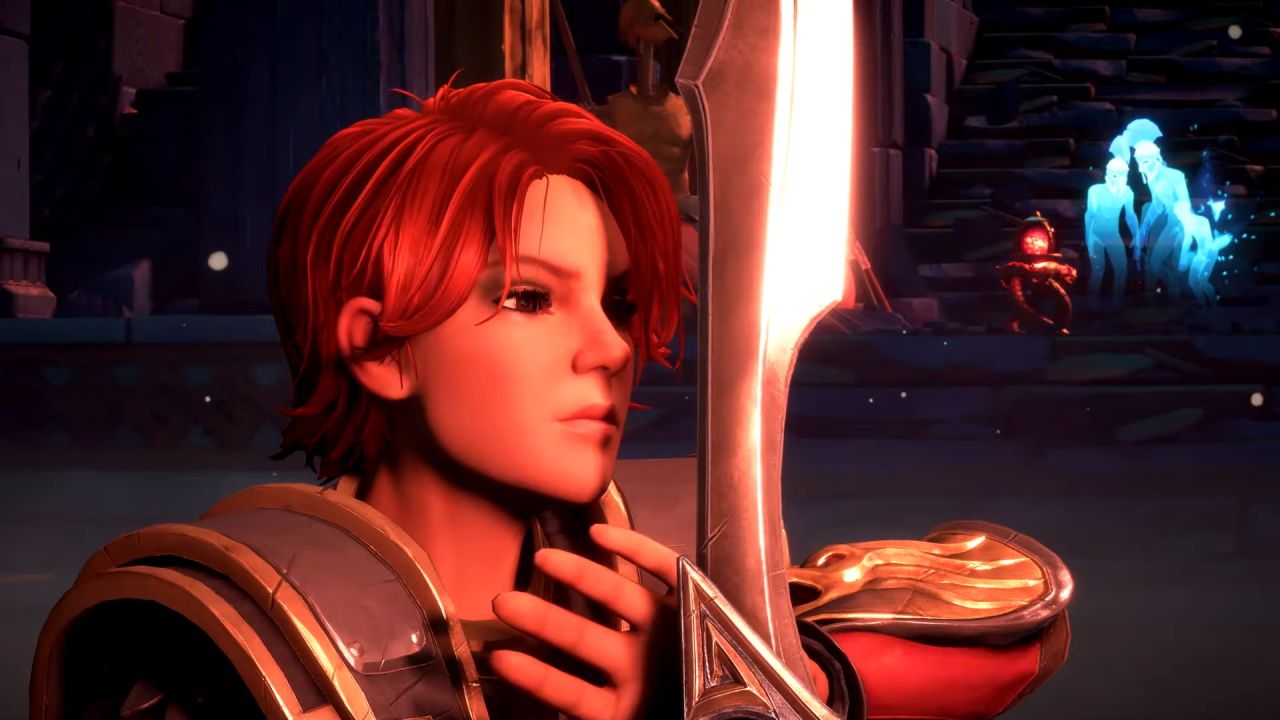 While the puzzles are hit and miss, combat is fairly straight forward. Right off the bat, Fenyx unlocks Achilles’ sword, Odysseus’ Bow, Daedalus’ wings and the Axe of Atalanta.  These are all pretty typical items with the sword putting out the most consistent damage, the axe is slow but powerful and breaks through shields, the wings allow double-jumping and gliding, and the bow has access to Apollo’s arrows, which can be manually guided.

This is the basic arsenal for most action adventure games, but the main problem is that it doesn’t expand significantly from there. A huge emphasis is placed on upgrading weapons, armor, and skills, but each only has one or two simple upgrades and there are no new weapons to unlock. There are different versions of each item that provide small, unique bonuses, but they rarely add a new way of fighting.

There are, however, a few god abilities that can be purchased with Coins of Charon, such as Ares Wrath, Athena’s Dash, and Hephaestus’ Hammer. Unfortunately, these are all essentially ‘area-of-effect attack with stun’ with slightly different upgrades. Coins of Charon are also scarce, or at least take significant time to grind through challenges, and you’re left deciding between an upgrade for Ares Wrath’s damage or a power that helps out with puzzles such as speed control for Apollo’s arrow.

Even with the somewhat generic arsenal of weapons, the combat retains a decent level of enjoyment while traversing the different biomes and there’s a good variety of enemies. If you’ve ever wanted to face down a Cyclops, Minotaur, or even Medusa then Immortals Fenyx Rising has you covered. There are even a few unexpected minions, such as the automatons in Hephaestus’ forge, and most bosses have unique enough attack patterns to keep you on your toes.

However, like everything else about Immortals Fenyx Rising, it begins to feel like a burden by the end of the game. When I hadn’t received any weapon or skill upgrades in hours and I encounter yet another Cyclops, I was inclined just to run away.

I felt the same for essentially everything else that makes up Immortals Fenyx Rising. Oh another vault. I’ll just do that later, or maybe not at all. A challenge to open a chest with random upgrade materials? Pass. No Zeus, I don’t want to hear another joke about your children’s shortcomings. Honestly, it’s a game that should be consumed in small bursts. The first vault of the day feels exciting. The tenth is a slog.

There are a lot of enjoyable aspects to Immortals Fenyx Rising, but very little feels new. Instead, it’s similar and safe, like I’ve done this all before. And I have but with a different main character and color palette. Its biggest sin is being entirely forgettable once you move on to the next game.