Horizon Zero Dawn really stuck with me when it launched back in 2017. I still think about the story it told, the revelation of what "Zero Dawn" actually means, and how it revealed this information. I couldn't fathom how Guerrilla planned to follow it up, even when Horizon Forbidden West was announced during the first PlayStation 5 Showcase in 2020. Sometimes the sequel to a new IP is a harder landing to stick than the first game in the franchise, but my goodness does Forbidden West get the job done.

The game picks up right after the events of Zero Dawn, as Aloy continues to learn more about the world she lives in…and the one that came before. Her journey sends her to the titular Forbidden West, where she meets new tribes and battles new machines while she tries to learn even more secrets about the past. Playing through this adventure will feel very familiar--this is certainly a "if it ain't broke, don't fix it" situation--but there are definite improvements that make the game even more fun.

First and foremost is the story, and I promise I won't be spoiling anything here. Of course, not getting into spoilers makes discussing the story of the game the hardest part of this review, because I so want to talk about all of the things that happen here, but I can say that I was as gripped by this game as I was Zero Dawn in certain moments. This is a story where, just when you think you have things figured out, you get tossed a curveball. There are a few actual jaw droppers too, some of which come fairly early into the adventure. As you progress, Forbidden West wants to keep you guessing, drives your desire to learn everything there is to learn about it, and it's a beautiful experience. 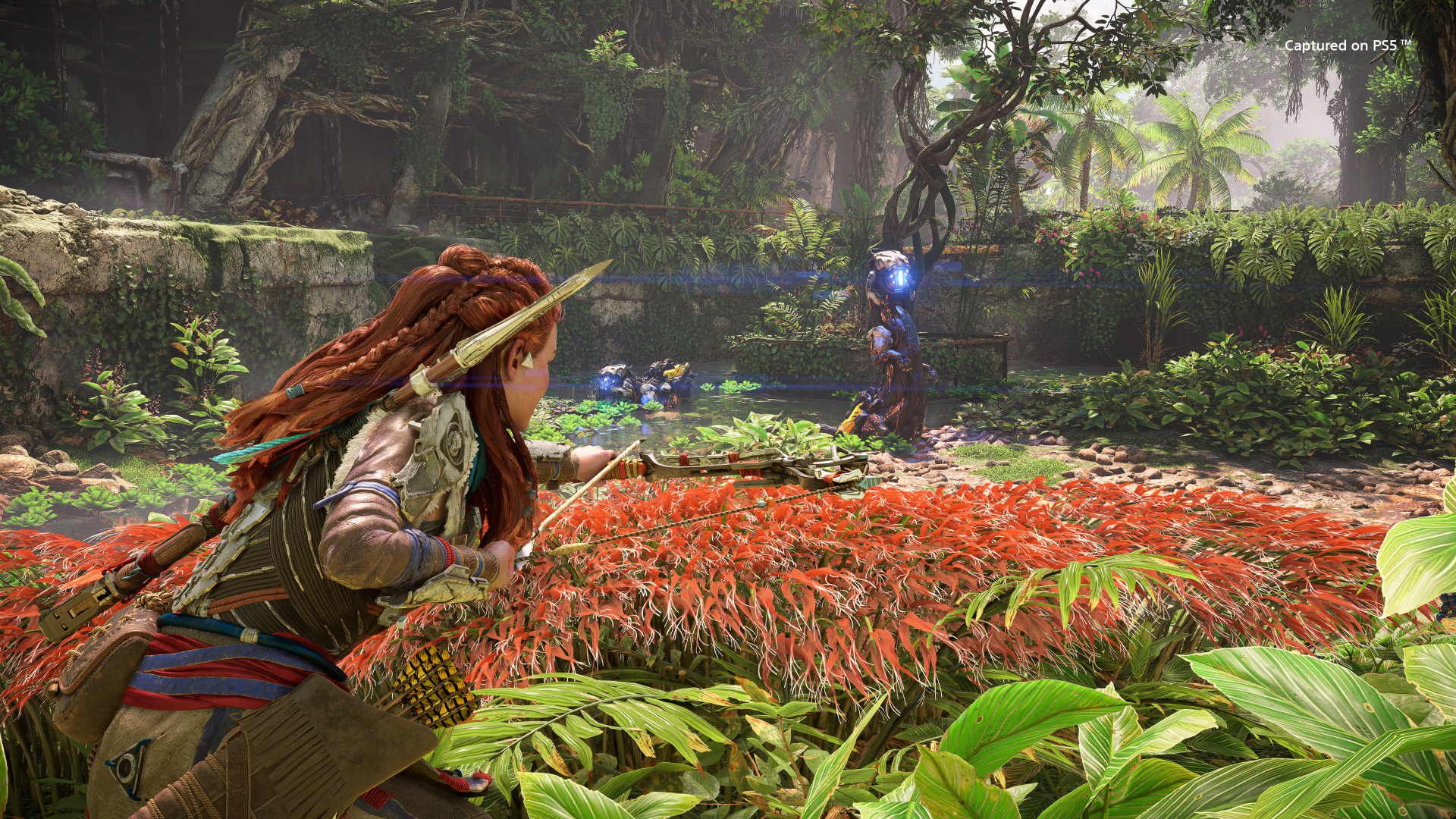 Think of it this way: in Zero Dawn the game was forced to keep its secrets close to its chest, particularly in the science fiction sense. We didn't know what was really going on when we first switched the game on; all we knew was this world was filled with machines and the cavemen-esque people who hunted them. By the end of the game we had answers, but the sci-fi aspect of the story ran out of time to really spread its wings to the fullest. Forbidden West has no such limits, plunging headfirst into the best of this universe's sci-fi aspects.

I will say that at one point I thought Horizon might go off the rails a bit, focusing too much on sci-fi and forgetting about the tribes that brought us here in the first place. However, this story does such a good job of balancing the two sides of this narrative that everything seems fleshed out. I spent a good amount of time with the Tenakth and its sub-tribes, learning their ways and fighting with and against them, but I also explored the sci-fi underbelly of the story established in the first game. The transition from one to the other is jarring at times--going from "fighting with bows and arrows" to "futuristic ruins underground" is always weird and has been since the last game--but somehow Forbidden West makes it all work.

The engine that makes it work, the heart and soul of this game, is to no one's surprise Aloy. This character continues to be one of the most well-written, well-developed characters in all of video games, and she's so damn fun to watch. Whether she's asking questions to gather information, shutting down someone with a quick zinger, or explaining her next moves, watching Aloy on-screen is amazing. It's hard to dig into why her performance in this game is so impactful, partly because the driving force of said performance is again delving into spoiler territory, but suffice to say that Aloy continues to be a supreme badass throughout Forbidden West.

I will say that sometimes her dialogue comes off a bit unnatural at times, especially when going through missions. She would at times say out loud the next objective of the mission, talking to herself as she proceeded through the quest. Most of the time it sounded normal, like anyone would while thinking out loud. Other times it sounded like the line was there specifically to remind the player of what had to be done next. They didn't sound like something Aloy would say, even though the words were coming out of her mouth, and it briefly messed with the immersion.

Getting re-immersed in Forbidden West wasn't difficult though, because this game is absolutely gorgeous. Every area of the game brims with color and beauty, from the tops of mountains to the sandy deserts. The views are unreal, really showcasing what the PlayStation 5 is capable of. The character models are just as impressive, speaking and moving with incredible detail. The facial expressions in particular were a focus point for me, with some of the most lifelike faces I've ever seen. It wasn't all perfect--a few times Aloy would seem like she was looking around or through the person she was talking to rather than at them--but for the most part these looked incredible. Small details like blinks, mouth movement, and head tilts really sell these effects, which in my eyes are a marked improvement from Zero Dawn. 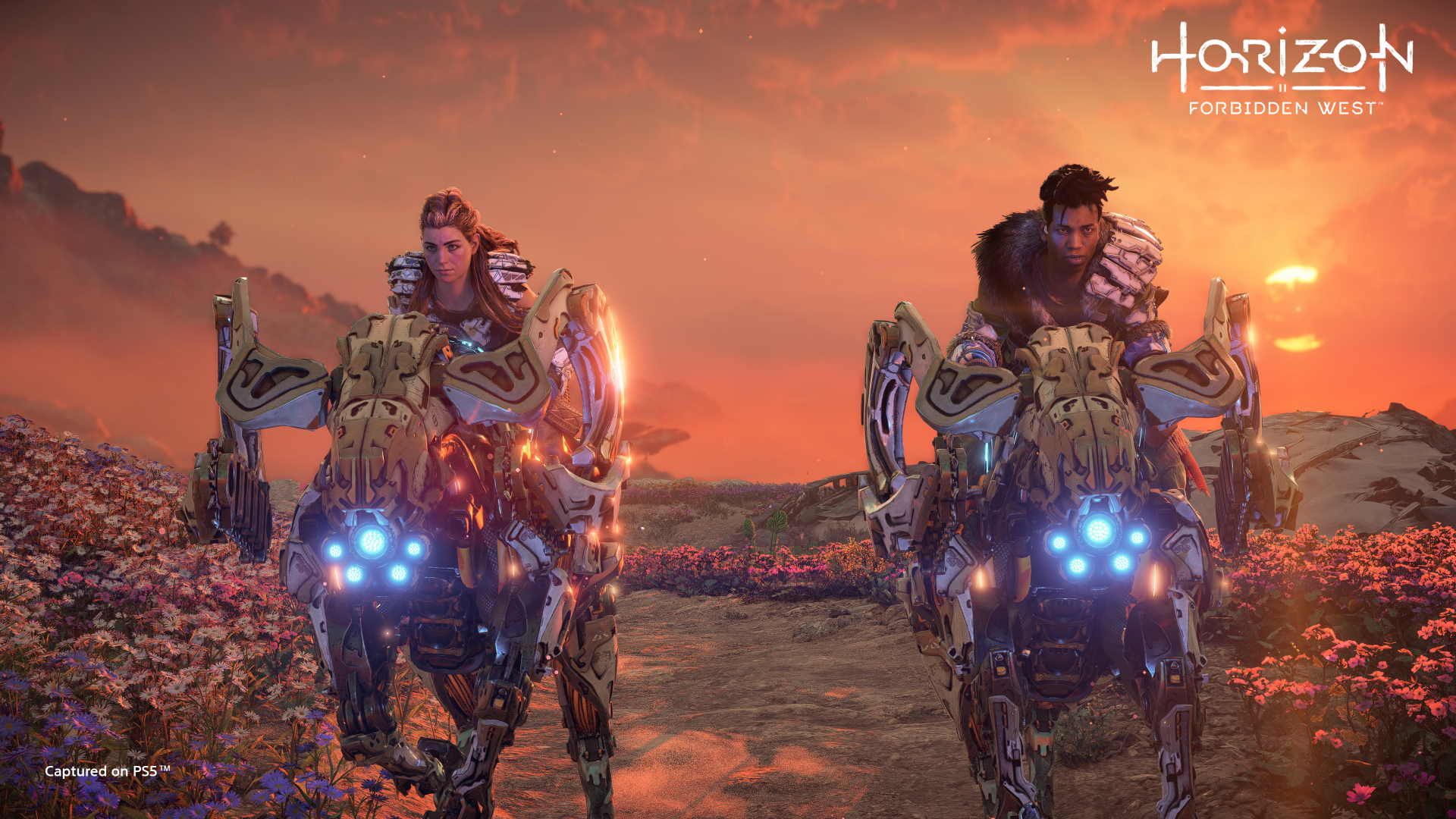 Some of the most fluid animations in the game, however, occur during combat. Combat feels the most like Zero Dawn, with Aloy switching between melee and ranged combat on the fly. The DualSense’s speaker and haptics make it even better, with incredible sounds and real-time feedback on the triggers that sound and feel really cool. Signature weapons from the last game returns, from the Tripcaster's wire traps to the Ropecaster and its ability to tie down enemies, but new weapons also appear to add some variety to the battle mechanics. My personal favorite is the Boltblaster, a chargeable weapon that shoots multiple elemental bolts at a time for massive damage. It's Horizon's take on a machine gun, and it's awesome to pull out on a big bad machine.

I personally prefer ranged combat to up-close melee fighting, but don't think that using the spear is a bad thing. Aloy is quite capable with the spear, especially as you learn combos and increase her prowess. There's even a neat little mechanic that rewards me for mixing things up, charging energy with my spear then using it to mark an extra weak spot on my opponent. I really have no complaints about the combat in Forbidden West, as it's just as fun as the previous game whether I'm fighting a man or a machine.

Speaking of the machines, there are a lot of new mechanical menaces to take on in Forbidden West. The one you've seen in trailers already is the Tremortusk, a massive elephant that's a real pain in the backside to take on. I wouldn't put it on the level of the Thunderjaw in terms of difficulty, but it's certainly close…thanks in no small part to the human enemies that fight alongside it. Another cool one is the Clawstrider, which bears a striking resemblance to the Dilophosaurus, aka that dinosaur that spit in Nedry's face in the first Jurassic Park. Actually, dinosaurs make up a decent amount of the new machines in Forbidden West, and that makes a lot of sense in the context of this universe (but no spoilers from me, I'm not a jerk).

Horizon: Forbidden West is everything I wanted from a follow-up to the excellent Zero Dawn, from the twisting story and fierce combat to the cast of memorable characters. Playing this for the first time felt like getting back on a bicycle, and before long I was traveling the wilds with Aloy just as we did before. There are a few technical missteps, and some of Aloy's dialogue sounds forced, but the majority of the game is simply amazing. I couldn't wait to get back into the world of Horizon after Zero Dawn, and now I can't wait to return again after playing Forbidden West.