In 2018, a brand-new take on God of War was released on PlayStation 4. Gone were the over-the-top bluster and juvenile tendencies of the previous trilogy. In their place was a more grounded tale centered around an older and wiser Kratos, who was trying desperately to distance himself from that past and focus on his present, namely his son Atreus. God of War: Ragnarok continues--and concludes--that story, and it does so in one of the most satisfying and memorable ways I could have imagined.

NOTE: This is a spoiler-free zone. No specific story elements or plot points will be discussed.

The world of the Nine Realms will feel familiar to those who played the previous game, only now the effects of Fimbulwinter are in full force. The Lake of Nine is frozen solid, traversed via sled dogs rather than boats. Kratos and Atreus can no longer use Tyr's Temple to travel through the realms, instead they must use gateways activated with seeds from Yggdrasil, the Tree of Life. Despite these new obstacles the game's story plays out in a similar fashion: visit a realm, do things in that realm, leave when you're done exploring, on to the next realm.

Every area of Ragnarok is brimming with beauty, though each has its own form of it. Svartalfheim's lake area will feel comfortable for those who played the previous game, its deep blue water simulating the Lake of Nine of old. Returning realms like Helheim and Muspelheim retain their ice cold and fiery personas respectively. A few other places--none that I'll mention here due to spoilers--are just as gorgeous, offering some incredible sightlines as you gaze over the horizon.

What I can talk about without risking spoilers is the combat system, which is for the most part unchanged from 2018. Kratos will vary between light and heavy attacks with both the Leviathan Axe and the Blades of Chaos, chaining attacks into combos for heavy damage and maximum style. Runic attacks also return, giving Kratos unique special attacks that require a recharge before use. 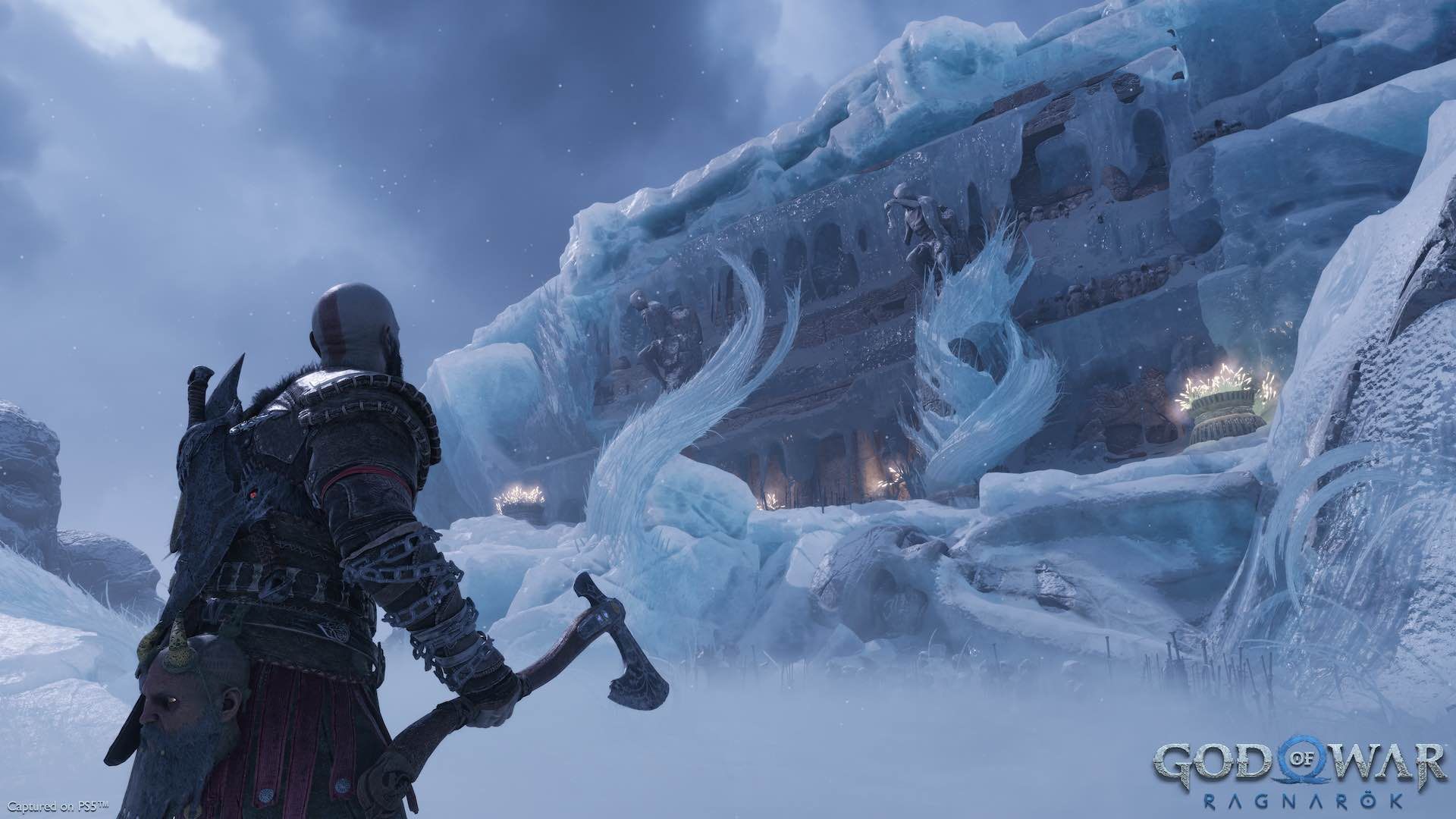 It’s a good thing Santa Monica Studio chose to mostly leave the combat alone, because it’s still as heavy and impactful as the last game. Every swing lands with a solid thump, the Runic attacks are downright devastating when used correctly, and the dodge and parry system is still super rewarding for those with precise timing.

Despite the familiarity with the previous game, there are a few new tricks available. Kratos can charge his weapon with energy for extra elemental damage, be it the ice of the Leviathan Axe or the fire of the Blades of Chaos. Ultimately, the way you'll control Kratos in battle has not been altered much from the last game, which honestly is a great "it's not broken, don't fix it" decision from the team. That combat felt great, this combat feels great, and that's how it should be.

What does affect combat in a meaningful way this time around is enemy variety. Ragnarok offers dozens of unique enemies to overcome, from familiar Draugrs and Hel-Walkers to powerful beasts that offer quite a challenge. The early parts of God of War throw these enemies at you one-by-one, letting you get a feel for attack patterns and movement. Toward the end, however, you'll be greeted with multiple enemy types at a time and forced to deal with all of them at once.

Instead of giving Kratos outrageous new powers, Sony Santa Monica opted instead to change the enemies Kratos would be fighting, which in turn makes combat feel fresh and new even if, mechanically, it isn't all that different. I love this approach, as it allows me to reacquaint myself with God of War's systems in a manner that doesn't overwhelm me, while also providing enough new challenges to keep building my skills. Striking that sweet spot takes a lot of effort, and Ragnarok rewards that effort in spades.

The RPG elements of the previous game make a return in Ragnarok, both through upgradeable weapons and armor and skill trees for each character. Hacksilver is once again the currency of choice, and it is plentiful if you're willing to look for it. The skill tree is built up through experience points, which come with every victory in battle and the completion of every quest. I was able to fill Kratos's entire skill tree before the final quest, and that was after only completing a few side quests. Building Kratos and Atreus into the powerful warriors is made simple thanks to uncomplicated methods, which allows me to get through the process quickly and get back to exploring the realms. 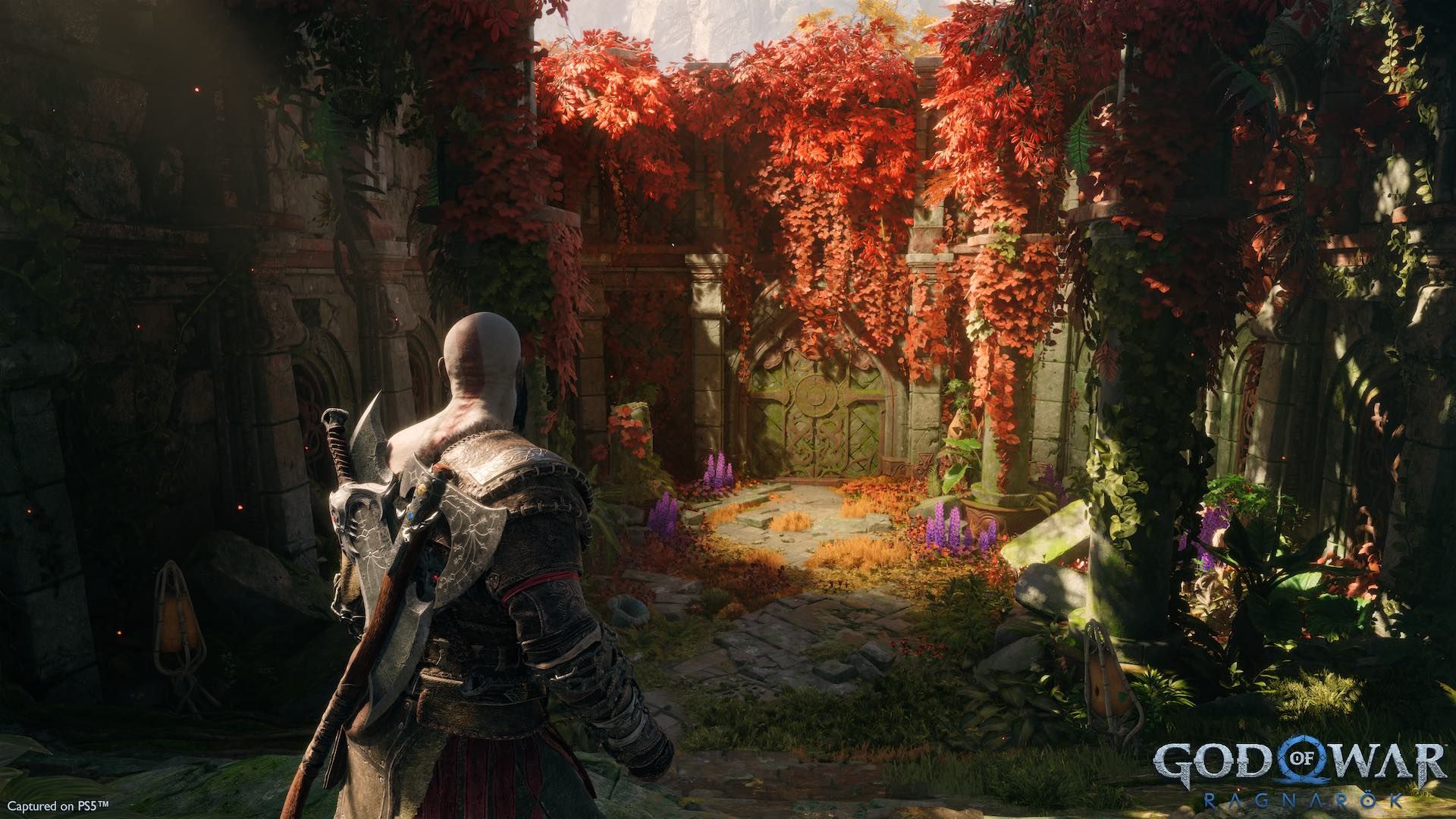 The crowning achievement of God of War Ragnarok, however, lies in its story. This part of the review is why I included the disclaimer at the top, because it's very, very difficult to talk about it without diving into every minute detail. On a general level, Ragnarok is a tale about letting go, about accepting what cannot be controlled and moving forward with our lives. This overarching theme manifests itself in multiple ways, most prevalently in Kratos's all-too-familiar arguments with his now-teenage son. One scene in particular allows you to overhear a conversation between two parties, and the discussion they're having sounds like one I've had with my wife about our children. Again, I won't dive into specifics, but hearing the two go back and forth gave me a major hit of deja vu.

Therein lies what I think is the most effective element of Ragnarok's writing: I'm watching a story unfold that deals with literal gods, beings who have ascended the mortal realm and hold immeasurable power, and yet all of their depictions are so…human. The issues they face, the arguments they have, the situations they sometimes find themselves in are grounded in reality, rooted in things everyday people deal with all of the time, and in doing so it shows that even the mightiest among us can feel genuine weakness.

All of these pertains to the main quest, of course, but there are plenty of side missions that further enhance the story being told. In fact, these side quests are the best source of another key strength: witty banter between the characters. Mimir once again delights with his stories, wisdom, and one-liners, and going off of the beaten path often results in some of his best interactions. These quips make me want to venture off and see what I can find, and considering the wealth of loot to be had, whatever gets me after it is a good thing.

The quest line writing is enhanced by the voice acting, with every part cast perfectly. Christopher Judge’s stoic Kratos, Sunny Suljic’s noble and naive Atreus, the aforementioned Mimir, the list goes on, but every single character delivers their lines with aplomb. Whether it’s the most important scene in the game or a brief side conversation between background characters, this is one of the best performances for a full game cast you’ll find today.

God of War: Ragnarok is, simply put, the complete package. It tells one of the best stories in video games, one that will have you run the gamut of emotions while playing through it. Fighting the enemies of the realms feels a lot like the previous game, but there's enough new and refined elements to help it stand on its own. The world of the Nine Realms is equally beautiful and dangerous, and it is stuffed to the brim with things to do and enemies to challenge. Ragnarok may be coming, but this is one world-ending event I'm excited to experience over and over again.

Full Disclosure: A copy was provided by PR for the purposes of this review.