Fae Tactics achieves a rare feat of being simplistic and overwhelming at the same time, streamlining the turn-based strategy RPG formula while also adding so many new nuances it’s difficult to keep track. That’s not to say the game is impenetrable, once the core systems are learned and the tiny elements figured out the game purrs like a kitten, but it takes a long while to tame the beast. This is a game that rewards the patience of the player, or better yet it rewards the player’s willingness to learn, but it will bury people who try to act rashly. That makes it a successful “strategy” RPG by definition, but getting there can still feel like a chore..

The story of the game is its only easily digestible feature: a young girl named Peony is imbued with magical abilities, and together with her canine companion Chico and avian ally Payachin they embark on a journey to fix her bike...at first. Eventually there’s a larger war between humans and fae that the team gets wrapped up in, and that sets the stage for the main conflict.

That said, the side quests are somehow more interesting than the main plot. It’s a regular feeling to not care about the epic human/fae clash, instead wanting to find out what happened to Payachin’s parents or who’s fighting those enemies by themselves over there. The side stories are engaging and interesting, which is a plus, but when they’re more fun than the main story the game is telling that’s not entirely good. 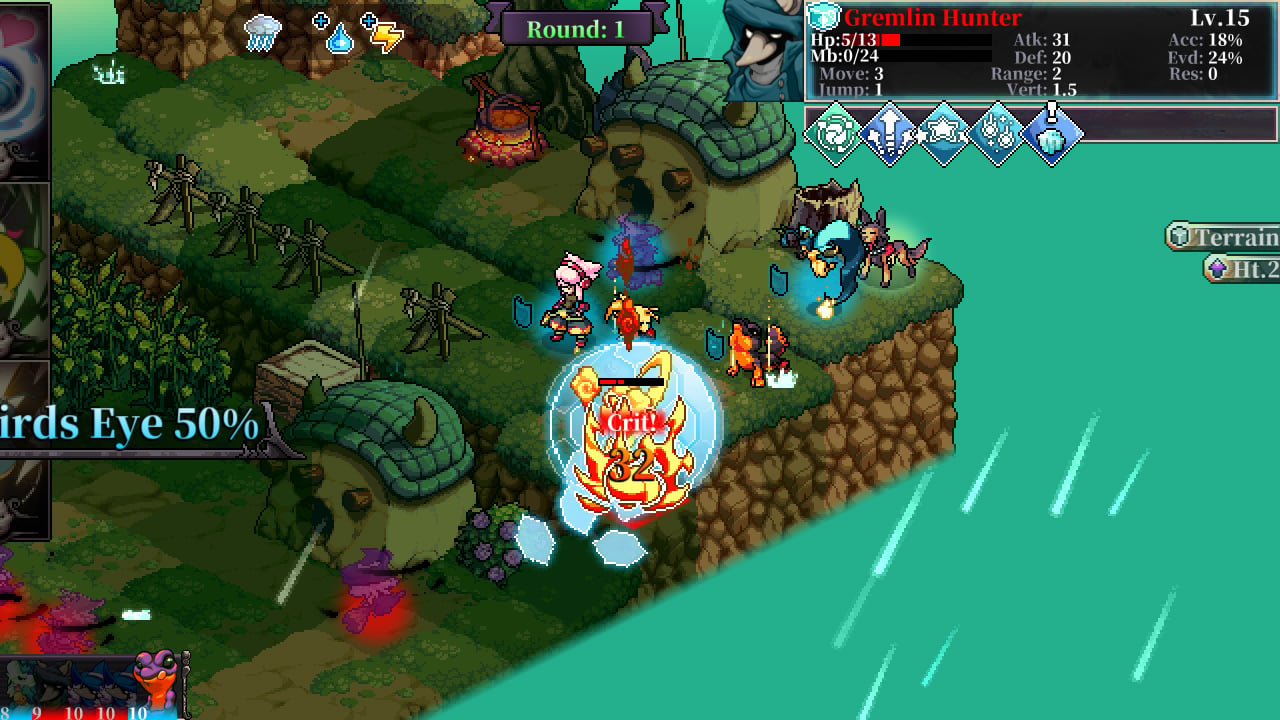 Battles in Fae Tactics will look very familiar to those who played a lot of Final Fantasy Tactics or Tactics Ogre: a grid-based battlefield, the ability to move only a few spaces at a time, not being able to attack until an enemy is in range etc. However, to the game’s credit, even the “hurry up and wait” stages of a battle have consequences thanks to character buffs only possible when a character doesn’t attack. Chico the dog has Protector, for example, which when activated has him take full attack damage for any teammate standing within a certain distance of where he lands for the remainder of the turn. Peony gains the ability to Chain her magical attacks, letting her strike multiple enemies at once when she finally does act.

These buffs add layers to the overall strategy of each battle, increasing the tension of the moment, but they also make every turn drag on for ages. Enemies also have the ability to gain perks while staying idle, so a turn becomes a cavalcade of boost and perk noises right from the jump. It’s annoying at best and maddening during later turns, especially when victory is all but locked in and all it takes is getting the final ally to attack.

Other battle layers include the ability to summon helper monsters at the beginning of battle -- determined by collecting and selecting monsters throughout the game -- and omnipresent spells that cool down for a fixed number of turns after use. The monsters summoned are the same as the ones fought throughout the game, and as such contain similar powers allowing the player to “scout” them as new ones appear on the battlefield. 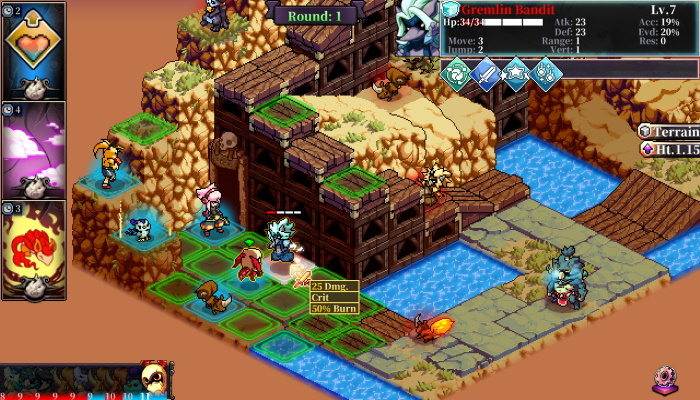 The spells range from offensive elemental attacks to healing spells and defensive perks, and creating a kit of three at a time gives me another. Both of these facets can be customized at the player’s will while progressing through the game, opening up battle strategies to near-infinite possibilities. These are neat gameplay elements, ones that allow for a lot more freedom when entering a battle but ultimately lock the player into a certain strategy once the battle starts.

With all of these elements playing off of one another Fae Tactics is not a game designed for those who want a quick fix, even though it does streamline some of the genre’s more persistent elements. Menus are all but removed from the equation save for pre-battle preparations, which is a major point in the game’s favor. Leveling up is simply moving a tick in offense, defense, or what can best be described as “miscellaneous,” and can only be done for Leader characters like the three mains. There is no stat boosting for the summons that level up, which makes me wonder why they need to level up in the first place.

Fae Tactics definitely lives up to the legacy of the turn-based strategy games that have preceded it, but it does so in a manner that almost becomes its downfall. Battles are simple to pick up but hard to master, not because of the enemies on-screen but due to the boatload of options and perks and boosts to consider during every turn. Streamlining the typical turn-based strategy formula is good, but not when complexity is confused for variety, which sometimes happens here. The story is fine, nothing to truly write home about, though the sidequests definitely should be experienced whenever they appear. While expecting Fae Tactics to be the resurgence of the tactics genre is hasty, there’s still a fun, thought-provoking game to be played here. Just try to burn out on all the choices you have to make before jumping into battle.