Looking at developer/publisher, Idea Factory Co.’s website it’s easy to see that they are subject matter experts in all things related to anime. You can’t help being impressed by their anime inspired game titles listed on their website. In fact, a few of these I’ve reviewed for other sites and others I’ve considered purchasing at some point in time. Their latest milestone is the port of the anime JRPG, Death end re:Quest 2 onto the Nintendo Switch console. This dark, mature audiences only meshing of a couple of game styles is enjoyable but is clearly not perfect.

In my youth, even though I was a big comic book fan, I never truly got any kicks from the anime genre. Whether it be books in the form of manga, shows, video games, etc. the concept of anime was never in the forefront of my mind. Sure, during the early years of video gaming on Nintendo I’d play my fair share of all the popular JRPGs. But it wasn’t until I became a gaming journalist, or perhaps a bit older and wiser, that I pursued anime inspired games versus shying away from them. Maybe now being older I can appreciate the details and the nuances of the art form.

When I was offered the chance to review Death end re:Quest 2 I had assumed it was strictly an anime inspired JRPG. Clearly, I was undereducated going into this game and probably didn’t read the fine print as I was an hour into the game and hadn’t seen one frame of combat yet. Then it hit me that I was taking part in a visual graphic novel experience that has RPG elements interwoven into it. And I’m fine with that as I’ve reviewed several visual graphic novels and have enjoyed them. But the inpatient gamers out there might not have the same tolerance level. It’s a case of knowing what you’re buying before you buy it, hopefully insight fulfilled by reviews like this one.

I personally never played the first game in the Death end re:Quest series so I can’t say how this one compares to the first. Death end re:Quest 2 appeared to be a self-contained story on its own. It’s safe to say that based on some of the scenes, topics, and dialogue that the story in this game is intended for mature audiences. 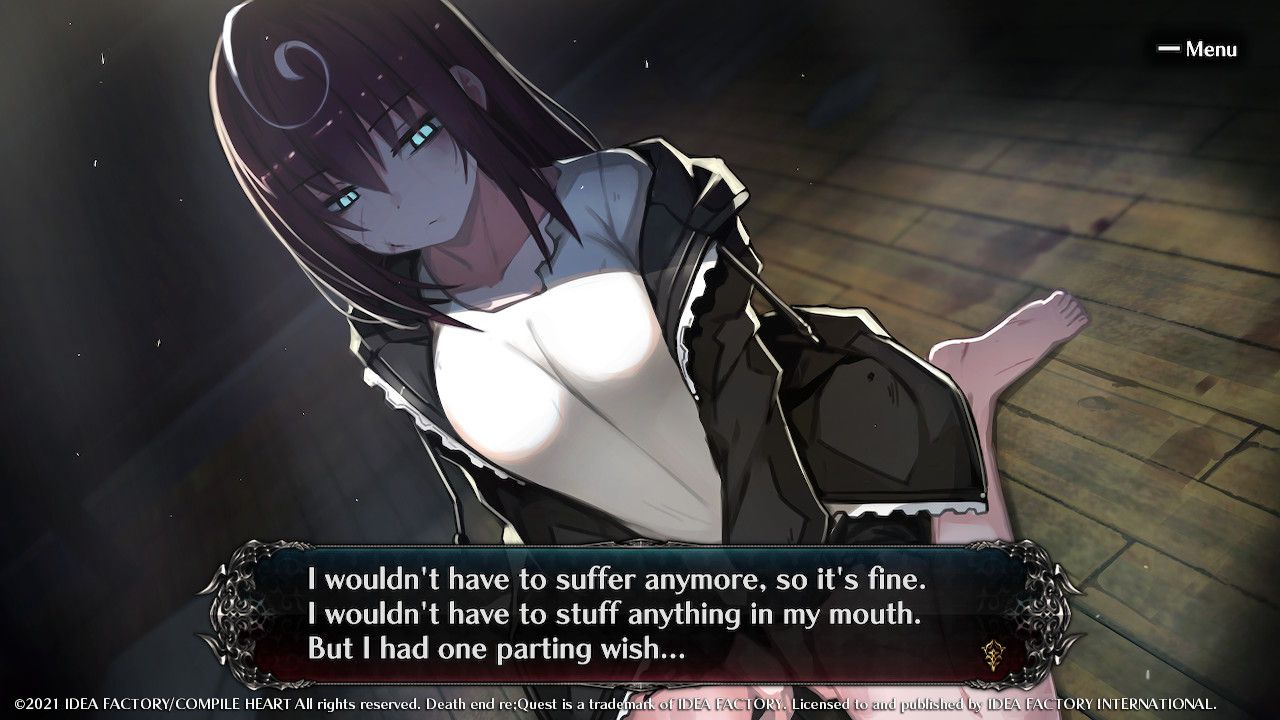 The story revolves around our main character Mai who, with her sister, comes from an abusive setting that includes physical and sexual abuse from her father. The opening scenes are traumatic when Mai is pushed to her limits and induced into a frenzy that ends in excessive measures taken against her father. Let’s just say, without trying to be funny, she goes all “Lizzie Borden” on her father.

Becoming a self-made orphan finds Mai living at Wordsworth Academy. This is a home for abandoned and abused teenage girls. But she’s also there with an ulterior motive, that being hoping to find her long lost sister. The academy seems too be good to be true initially. During the day things are relatively calm and once night falls things like girls go missing, strange sounds occur, etc.

The story plays out like you’d imagine about the angst of a troubled, battered teenager who finds it difficult to make friends and being forced to do just that. Also, along the way she unintentionally makes an enemy or too “just because”. And going through this story is where the visual graphic novel portions come into play with an anime inspired paper doll cutout presentation. You might know the type where character models and backgrounds are often repeated but with different dialog (which probably has more to do with trying to keep the game’s footprint manageable). 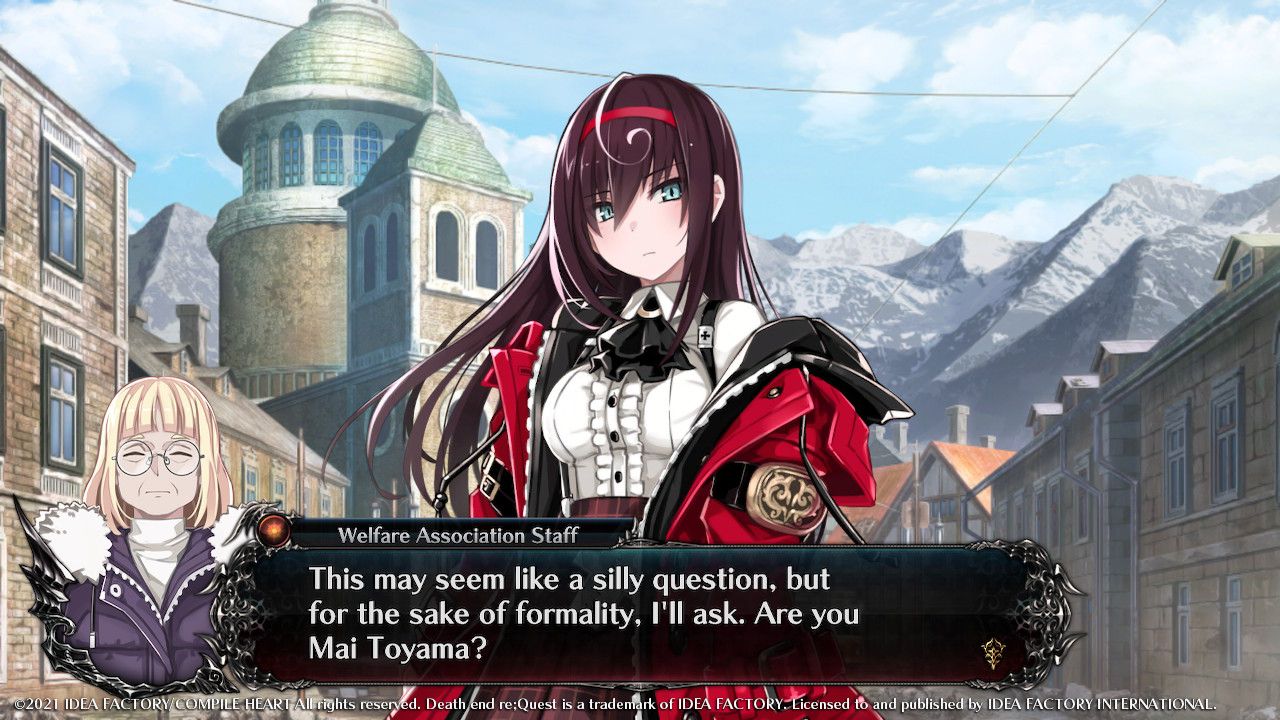 Some of the banter is a bit childish in spots but for the most part it can be read quickly and serves its purpose. Some of the storyboards are supplemented with occasional English voice overs which helps break up the monotony of reading for your non-hardcore readers out there. These voice overs seem to have a slight issue in handheld mode though. I played the review on the newer OLED system with “improved sound”. Unfortunately, Mai’s voice parts seemed to sound muddled and low in volume in contrast to other characters in a static scene. Luckily I got by with the text version on screen in those cases.

Eventually, Mai discovers that girls of the academy go sneaking out at night to witness the deadly, horrible monsters roaming the streets of the town of Le Choara. Mai decides to follow them, and this is where the combat stages happen, during the night scenes.

From a third-person perspective you’ll search areas of the town looking for clues and such. This is where you’ll encounter monsters roaming the street which places you into turn-based combat in similar fashion to how a Pokémon game plays. Initially Mai is solo but later on she can have up to a party of three.

The combat system is where the game really shines. Each encounter takes place in a round arena, and you’re initially presented with a top-down view to start your game plan. During a turn you can move around on the battlefield to get a specific placement. Also during a turn, you can choose and queue up to three skills (a.k.a. the Triact System) to create unique skill chains. Sometimes combining three skills together results in creating a new reusable skill altogether so the system promotes being creative. 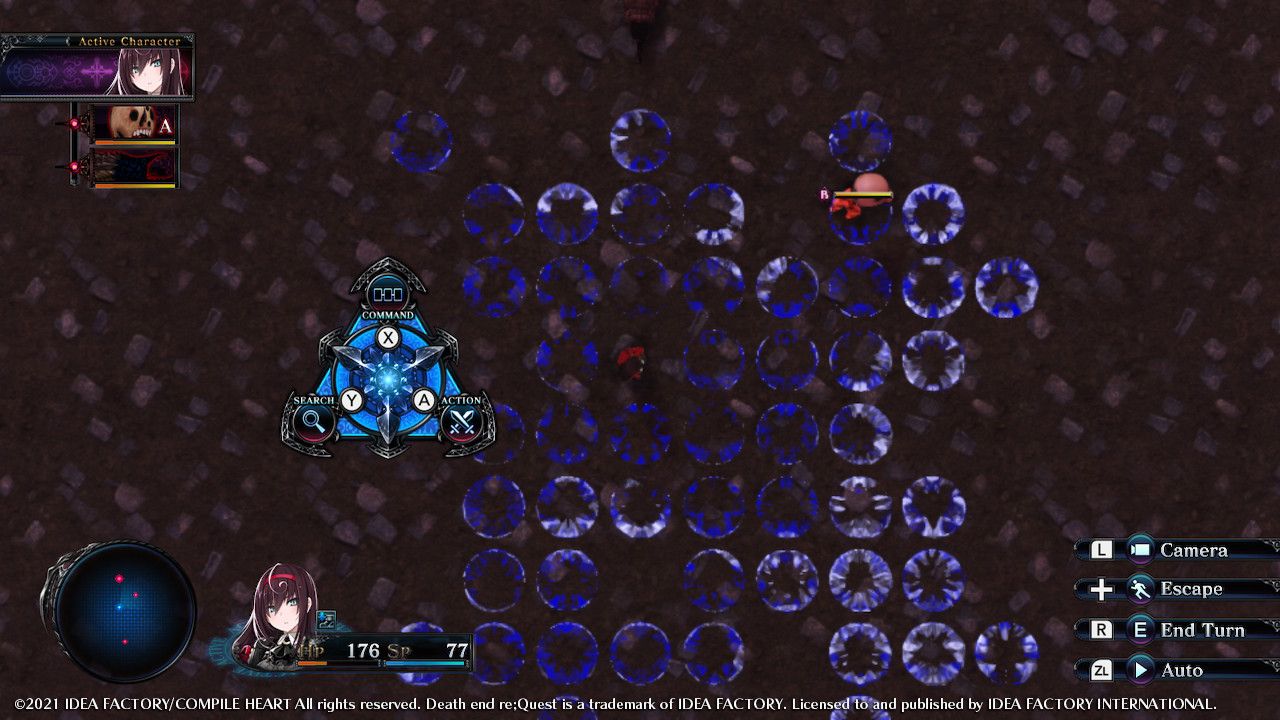 You have your typical attack skills and healing skills, but you’ll also have attacks that deal knockback damage. This type of attack propels one enemy into another or bounces them off the sides of the arena like a bizarre game of pinball or marbles.

During your turn in battle the camera is free form so you can see all angles plus for attack skills you can select your direction and see the areas where you’ll make contact. In the overhead view you’ll see guidelines of where your skills will be directed and hit.

You’ll also notice several colored circles, or cursed bugs, on the arena field. These can apply effects on you and the opposing mobs. You can run over these effects, viewed using ZR, during your turn to collect some and if you ricochet mobs over these during a knockback sequence, they’ll remove them from the battlefield as well. So there is some strategy to encounters as well. 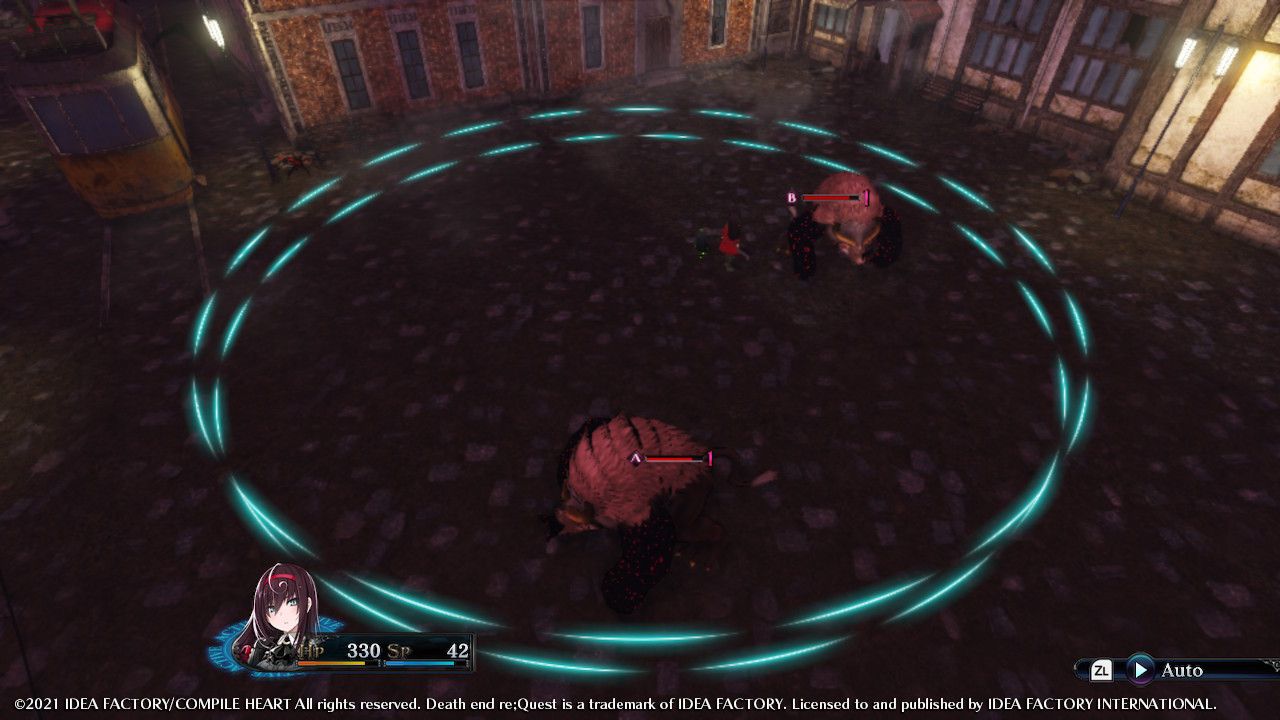 One of the biggest complaints is the visuals in the third-person perspective look “rough”. I know this is a horror game in some respects but the town of Le Choara looks displayed in fuzzy textures and jagged edges with some framerate issues. If the graphical disparity issues were perhaps more pronounced since I played on the newer OLED Nintendo Switch model, I guess I can’t say.

The town maps are also relatively typical layouts. Some exploration is encouraged as there are boxed items to find and computers to hack into which gives you access to the security cameras. Once into the security camera system you can pan looking for hidden items and entrances. While I appreciate the attempt at creativity the hacking thing was less thrilling than it sounds. 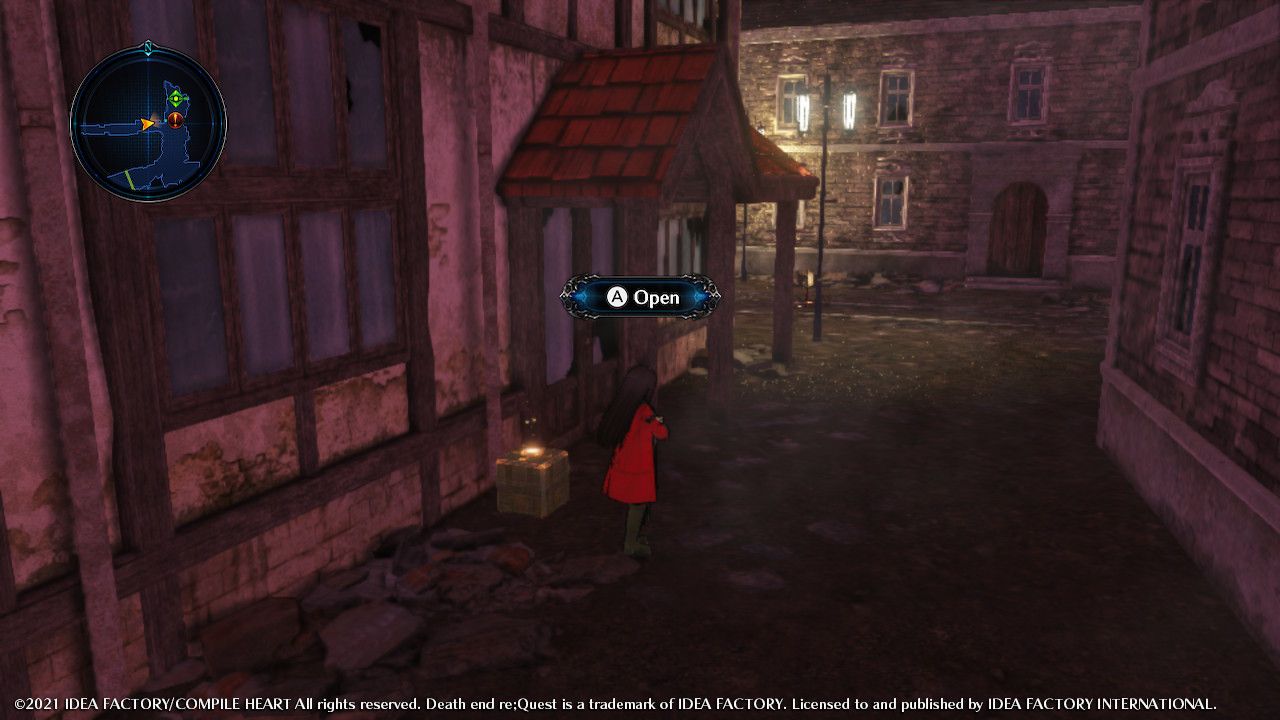 Even with Death end re;Quest 2’s visual issues the combat and skill system keep the gameplay enjoyable. It’s quite fun watching monsters smash into each other and bounce off the arena walls like taking a part in a game of Beyblades. Just be sure you know what you’re getting into because there are several periods of downtime when experiencing the beautiful visual graphic novel portions of the game.