Biomutant, simply put, is an enigma. There's so many things I want to complain about, little bits of jankiness scattered around that should make it easy for a critic to tear this game apart. The narrator talks way too much, so much the game gives you an option to tone it down. Re-used environments and identical dialogue between multiple characters show where some shortcuts might have been taken during development. Combat, while fluid most of the time, can suffer the occasional oddity. Despite all of this, I am fascinated by Biomutant and want everyone to try it whenever they can. It's a game that really needs to be experienced first-hand in order to be truly appreciated.

Biomutant takes place in a post-human apocalypse, where humanoid rat-like creatures now walk the planet and build new societies in our ashes. Tribes have risen up against one another, and massive enemies called Worldeaters threaten to devour the source of all life, the Life Tree, and bring about another armageddon. The hero, a ronin rodent (ronin-dent?) highly skilled in combat, must travel the world in order to stop the impending doom.

This ronin rodent is fully customizable, both at creation through things like fur color and face shape and during the adventure through stat builds and looted equipment. If you prefer melee combat with a smattering of gunfire, build his strength and equip a double-handed weapon. If quick strikes are more your style, dual-wielding smaller weapons is the way to go. As you gain upgrade points through leveling up you can spend them on new abilities in combat. No two Biomutant heroes will be exactly the same, which is exactly how a customization suite should work.

A quick side note: I love the different weapons I can loot throughout my adventure, especially the ones adapted from real-life human objects. One of my strongest double-handed weapons, for example, is a single blade from a ceiling fan. That's amazing. 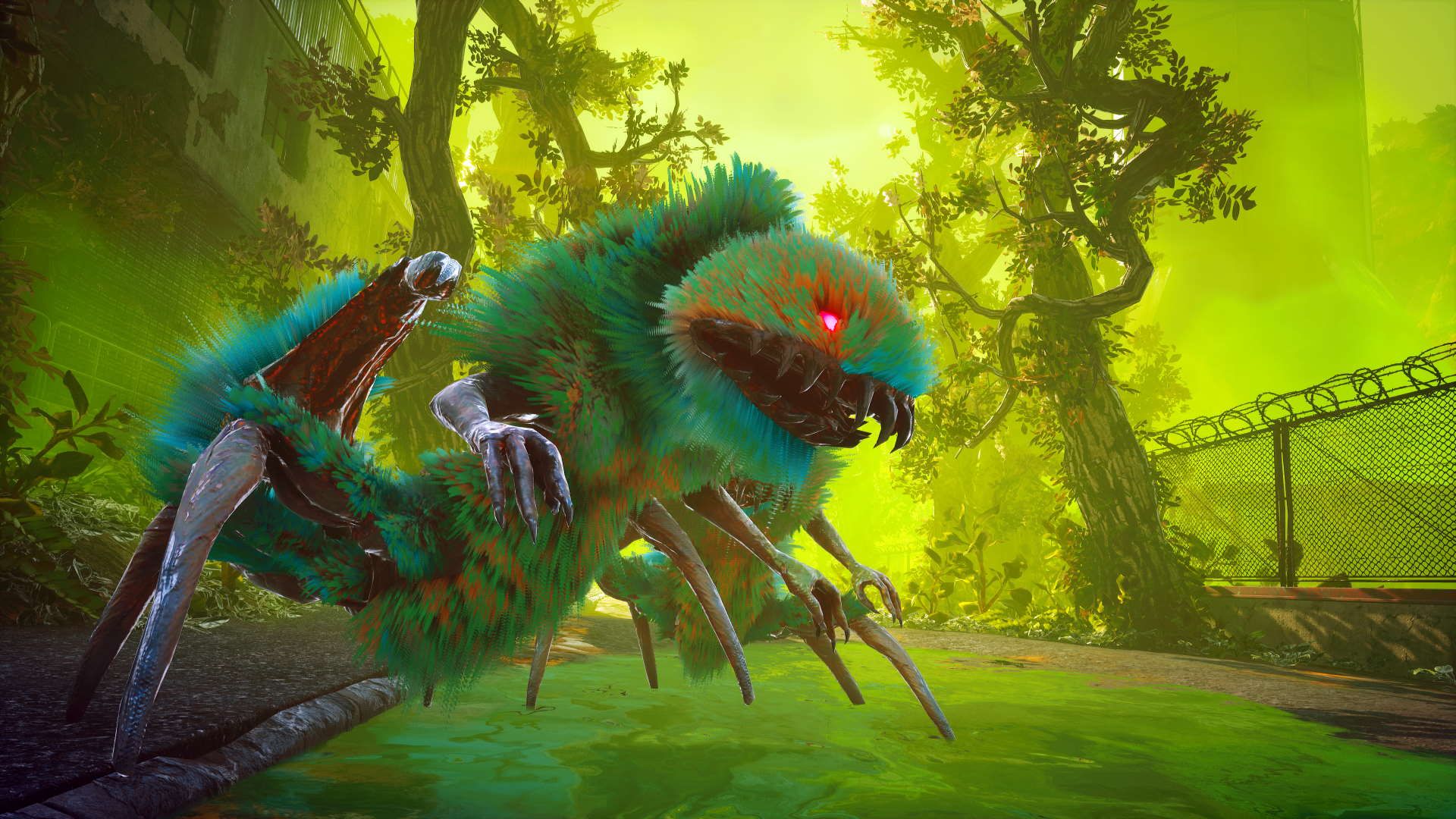 As for the post-apocalypse, the first thing I noticed about the world of Biomutant is its beauty despite being the end times. This game has some magnificent views to take in, particularly around the Life Tree at the center of the map. Color pops throughout the world through the lush green grass and trees, while even broken down buildings have their share of beauty. I was consistently in awe of how some of these areas looked, they're truly breathtaking.

The next thing I noticed about this world is that it's A) massive and B) packed solid with things to do. Constant new areas pop up naturally as I head toward an objective, giving me new places to explore and loot to collect. Battles could be hiding around any corner, sometimes the enemies seeing me before I see them, giving me one of those moments of hurriedly spinning around looking for the coming enemy.

Being such a gigantic world, Biomutant does have a fast travel system, and let me tell you the way the game handles fast travel turns what should be a mundane game mechanic into one of the game's highlights. Posts with yellow flags are scattered around the world acting as the fast travel markers. Approach one to activate it, and the camera pans back, the hero shuffles a bit, and then out of nowhere drips of liquid can be heard and a yellow puddle appears at the base of the post. That's right, our hero just marked his territory. Just number one'd all over that post. I've activated nearly every post in this game and I still can't get over it. It makes sense--animals mark their territory, this is a world of animals--but it's so unexpected and weird that it has stuck itself into my mind. 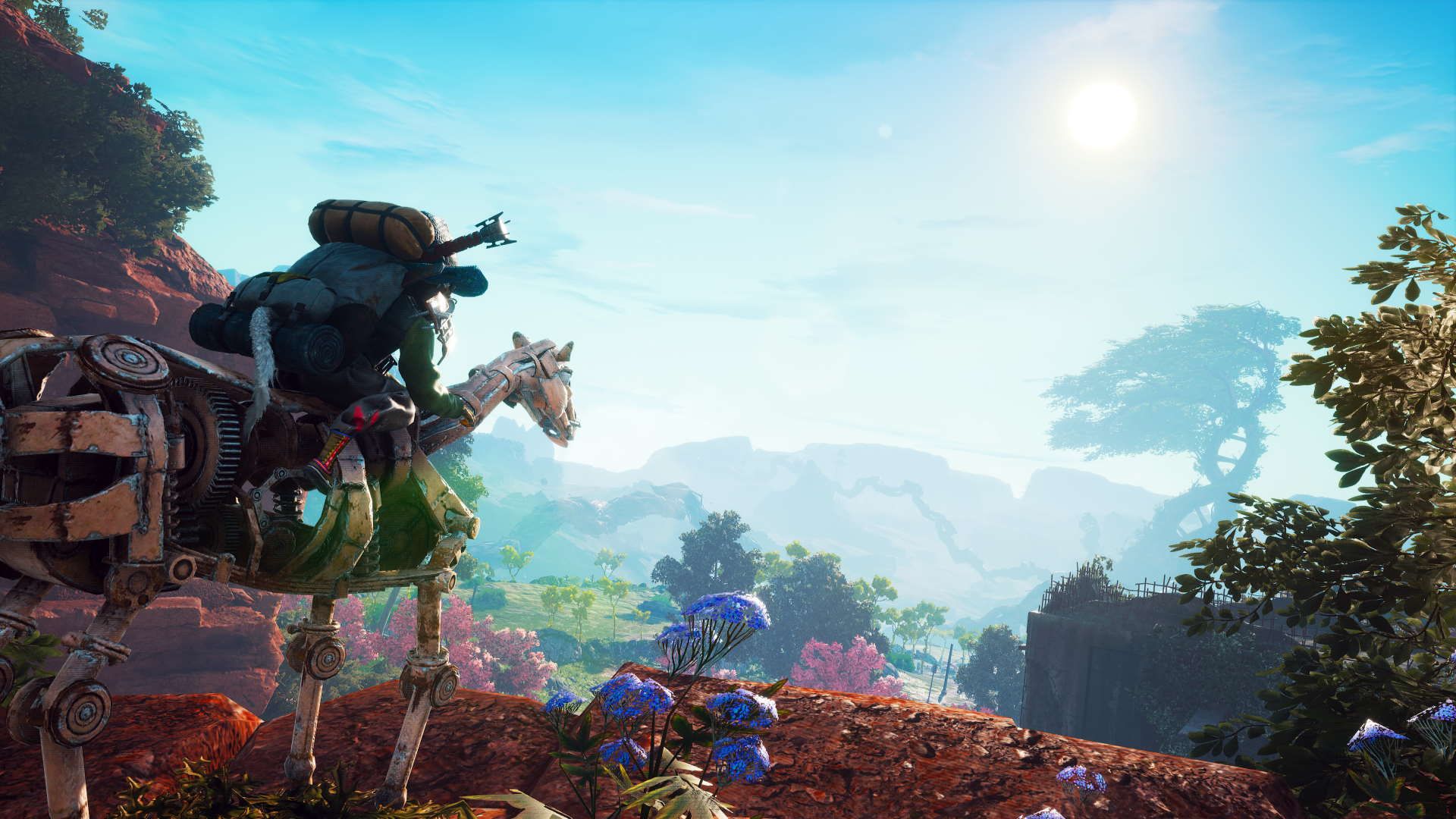 Moving on from peed-on posts, one highlight of what lies hidden are small minigames based on human technology. These devices, like projectors, weight benches, and even microwaves, are spread out across the world which boost my skills or act as locked chests in need of opening. These puzzles aren't difficult--matching colored dials does not take a lot of effort--but they're fast enough that they don't feel like too much of an obstacle.

These minigames also highlight one of my favorite things about Biomutant: every human element in the game has a name that sounds like it came right from the mouth of Scuttle from The Little Mermaid. The projectors are called Raylighters, the microwaves Fry-Sparkers, and the weight benches Muscle Crunchers. Everything in the world has a name like that, even the locations, and they never fail to make me laugh.

The entire world is obviously a commentary on today's world--the game does not shy from explaining how a big corporation ruined the world with unsafe practices--but some references are a bit more heavy-handed than others. Take Suburbia, a location close to the center of the map that is a torn-apart version of an idyllic suburban neighborhood. The narrator will comment on how this place was where "humans who wanted to get away from the city-stink and didn't like nature ended up," and when the hero asks why they didn't just clean the cities the narrator responds, and I'm paraphrasing, "it was easier to just move away from the city once it got dirty." Touche, Biomutant.

Speaking of that narrator, he does way too much speaking. Like, way too much speaking. I'll be traveling to an objective, just enjoying the scenery as I walk, and he'll pipe in with some inspirational quote about how life is what I make of it. Every time the day/night cycle changes he marks it with some inane comment like "the dark makes it easier to sneak around." I land a cool combo with my sword and I hear "HACK AND SLASH" or some other onomatopoeia. When a game gives you an option to tell the narrator to tone it down, he may have recorded too many lines. Props to the voice actor for recording all of those lines, but forgive me for not listening to them all. 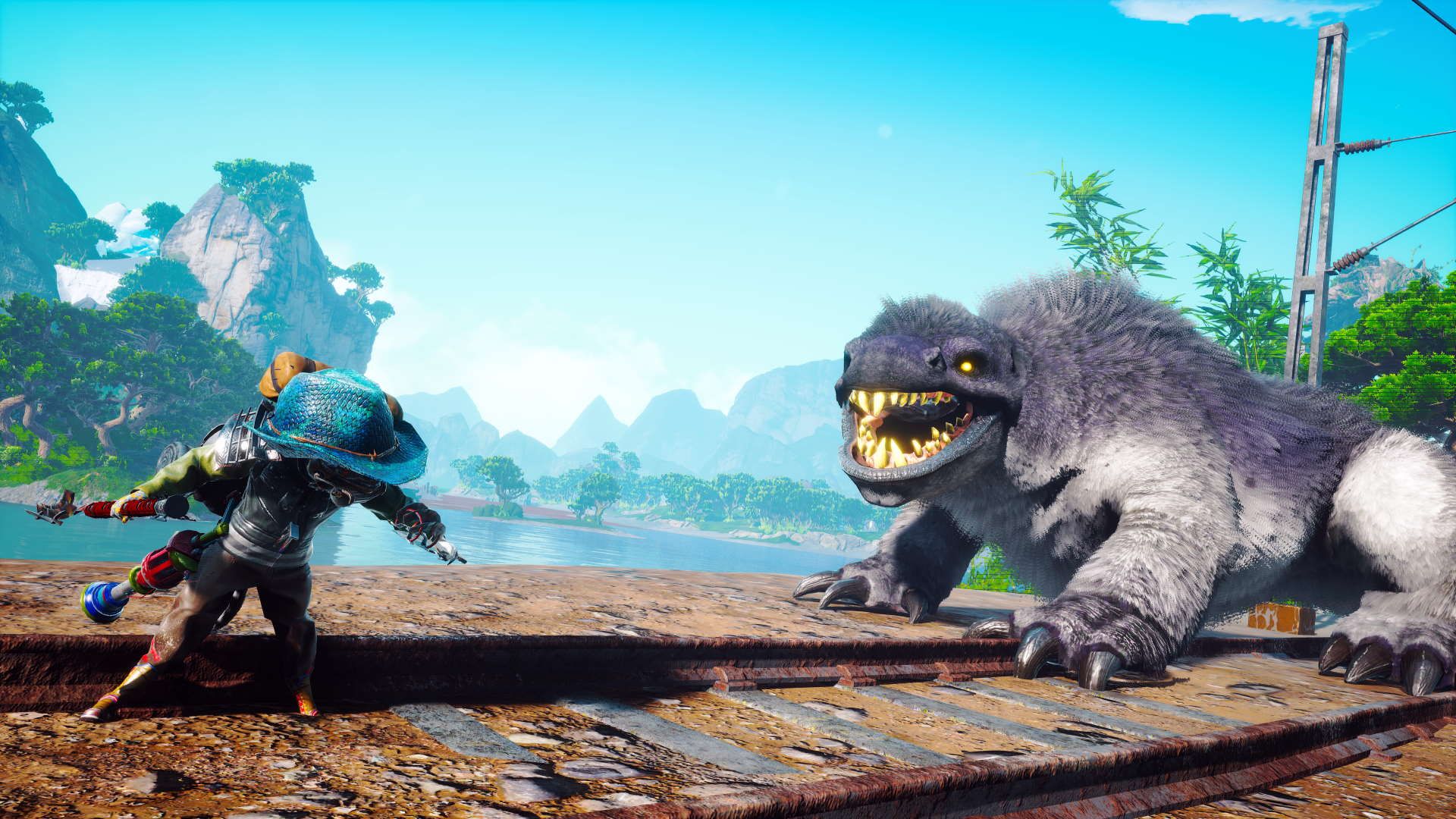 Let's talk about combat, because I can't decide if it's amazing or completely frustrating. Close quarters combat flows incredibly well no matter what type of weapon I'm using, however the hit detection leaves a lot to be desired. I could be swinging directly at an enemy and not register a hit, while one of the big brutes can grab me from across the street somehow. Gunplay is more precise in action, but the accuracy of the guns is sometimes so off-base that you wouldn't land a hit at point-blank range. These issues don't happen often, but when they do they've very noticeable.

What does work incredibly well, however, is fights against massive enemies that are sometimes encountered. I got "Thunderjaw from Horizon Zero Dawn" vibes from them, a massive beast trying to end me while I deftly maneuver around it and try to take it down. Mixing up guns and melee weapons is key to victory here, encouraging me to keep firing from a distance until I can get in and take a few swings. These are the best fights in the game, I just wish there were more of them to enjoy.

I should note, playing it on the PlayStation 5, I didn't have any performance issues that would hinder the gameplay. It was noted by the developer that the PS5 version runs at a 1080p resolution upscaled to 4K, so that could have something to do with the performance, but overall my experience was very smooth thanks to its 60 frames-per-second target.

Biomutant is a fascinating game, one that definitely belongs in a foregone era of gaming but somehow still works in today's industry. The world is massive and packed with things to do, combat is fast and fluid save for a few minor issues, and the story definitely keeps me interested throughout. There's jank, sure, but it's jank that somehow works in the game's favor, almost as if it's part of the game's identity. If you come in expecting a Game of the Year candidate you may leave disappointed, but if you're looking for a new adventure brimming with personality, Biomutant is absolutely worth your time. Just be prepared for that fast travel mechanic; it still shocks me every time.