A Plague Tale: Requiem is the sequel to, and continuation, of A Plague Tale: Innocence picking up shortly after where the prior left off. It’s a third-person action game developed by Asobo Studio that also dabbles in stealth and horror elements, but the main focus is the narrative. While the game has a powerful story in its own right, I highly recommend playing the first game before moving on to Requiem.

The story itself begins very lighthearted, which is a stark divergence from the ending of A Plague Tale: Innocence. The player controls Amicia and Hugo while playing hide-and-seek with their alchemist friend Lucas. The weather is sunny, the flowers are blooming, and the ruins look more like a playground than the aftermath of a battle. Shortly after, we’re all playing in the river and meet a new friend. Things feel innocent and peaceful, and you’re slowly instilled with a sense of hope for the party. Things are finally going to look up for Amicia and Hugo.

Unfortunately, if you’ve played A Plague Tale: Innocence then you know that hope must be fleeting. Amicia and Hugo stumble into what they expect to be an abandoned castle, but are immediately lumped in with a group of thieves as the group occupying the area attempts to stop them with deadly force. The pair eventually get caught and Hugo is forced to call upon his rats to save Amicia from certain death. 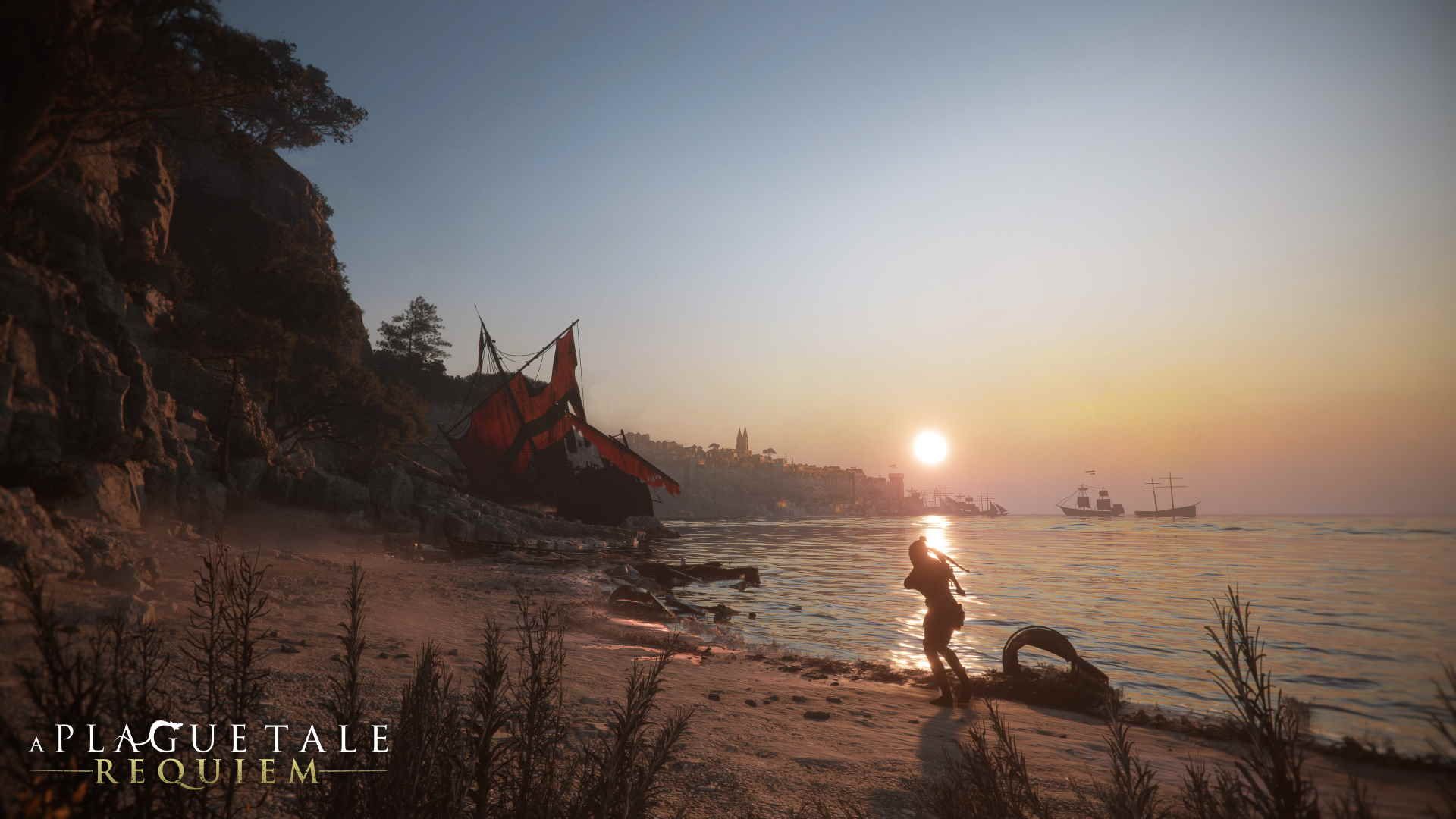 Although they escape, Hugo is greatly weakened and his sickness continues to spread. The group, Amicia, Hugo, Lucas, and Beatrice  (Hugo’s mother), eventually find respite in a town in Provence, France, where a Magister Vaudin of the Order is believed to be able to help Hugo. Following the theme of this game, that rest is short-lived, Vaudin’s techniques do not prove fruitful, and the group is once again forced to flee the rats and worse.

A Plague Tale: Requiem is a coming-of-age story that is shared between Amicia and Hugo; a girl who must come to terms with her lack of control and a boy who must face the harsh realities of the world and learn that things aren’t always what they seems. Despite the tragic events of the last title, the game starts off with Hugo in a childish, playful state. As Amicia, his older sister, we play games with Hugo and Lucas, the alchemist apprentice. While it’s nice to know that Hugo still has some semblance of innocence after all of the death in the previous game, the opening few scenes remind us that Hugo is still a small child even though he carries great and terrible power.

As Plague Tale: Requiem progresses, we’re constantly reminded of the harsh truths of the world that Hugo must experience for the first time. A great doctor who can’t produce a cure. The friend who betrays them. Dreams that don’t come to fruition. Peace that never lasts. In life there are no certainties, with the exception of death, regardless of the promises made. Huge must learn this time and again, and the wear from these events shows on his character. That initial playfulness turns to anger, frustration and eventually rage.

Amicia’s character development begins at an entirely different point in her life. By the time we reach Requiem, Amicia is already a killer with a fiery-hot temper. Time and again she chooses to fight instead of flee, and this puts her friends and family in danger. After each encounter, she learns a lesson, but there’s usually a cost and often a regression. Her desire to protect Hugo consumes her until she must control everything around her. This clouds her judgment and pushes her to put trust in the wrong people. Eventually, Amicia is forced to relinquish control and surrender her fight to protect Hugo at all costs.

One thing A Plague Tale: Requiem does excellently is envelope the player in the character's emotions. There were so many points in the game that I just wanted Amicia and Hugo to get a break. I could feel their pain and suffering and it drained me as well. I desperately hoped for them to find a nice bed and a warm meal. To make friends with someone who wouldn’t betray them. But every time you get close to hope it just fades away.

There’s one point near the end of the game where it truly got to me. In a hidden area off the path, Amicia finds a room cluttered with books and alchemy material. Instead of finding an item or bit of lore, Amicia just says “What a mess…I can’t” and sits down under the table sobbing. Then she gets up and puts her brave face back on before going back to Lucas and Hugo. She’s broken at this point but still feels like she has to carry the world on her shoulders, and it’s heavy.

Visually speaking, A Plague Tale: Requiem is gorgeous. The characters’ faces are highly detailed, the hair acts and looks realistic, and the clothing is incredibly intricate.  Asobo does an excellent job of handcrafting the environment to make it look and feel unique. When most of the game takes place in dark, dirty places filled with rats it’s important to not make every chapter look the same. We go from fields to castles and caves then onto forests, towns, and beaches.

The gameplay is very similar to the first game but with slightly more depth and smoother designs. Most of the mechanics consist of distracting or killing enemies with rocks, using light to scare away rats, solving puzzles, and crafting items.

As the game progresses new items and alchemy ammunitions become available that support both stealth and combat gameplay. Most of the game can be played without killing enemies, but there are a couple of battles that force the player’s hand. However, treating every encounter like it’s a battlefield is often going to get the player killed or use all of your supplies. Therefore, it’s recommended to play a balanced game and know when to hide, distract, or strike an enemy down. 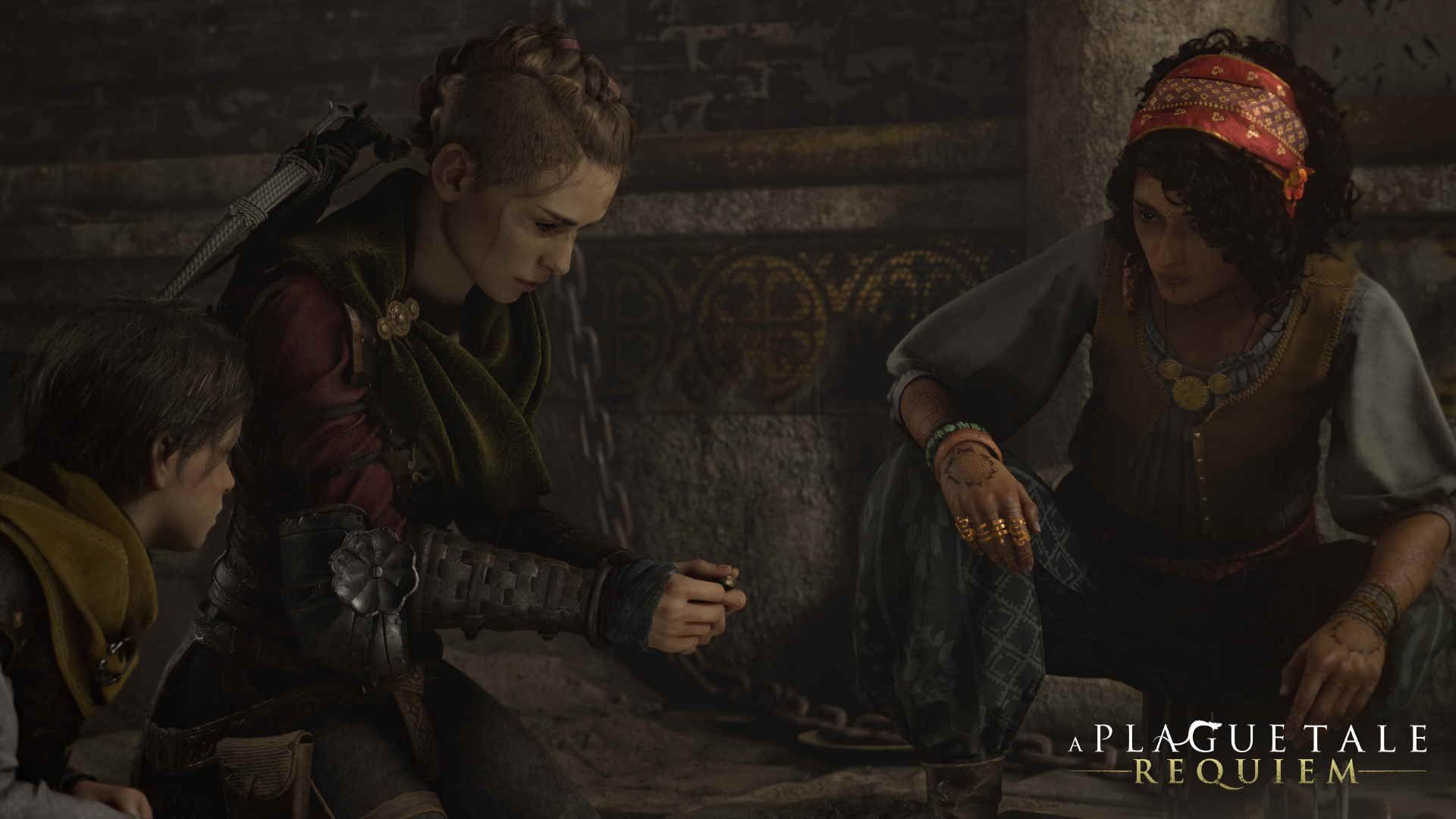 The upgraded arsenal, compared with Innocence, definitely provides more options but it can also make combat a bit clunky. By the end of the game, players have access to your hands, jars, sling, and crossbow, and each of those can use a rock or the four types of alchemy munitions. Cycling between the various weapons and their ammunitions can take a couple of seconds and it’s easy to select the wrong item while a soldier is chasing you down. While this complexity makes fighting more realistic, and grants access to different strategies, it definitely caused a few of my deaths by accidentally selecting the wrong combination of items.

Finally, players have access to two separate upgrade trees. The first requires finding tools and material scraps to upgrade your items, such as improving the power of the sling. The second is the skill tree, which is leveled based on your actions. At the end of an area, players are rewarded with Prudence experience if they focused on stealth, Aggressive experience if they attacked lots of enemies, and Opportunism if they used alchemy. Each of these skills reinforces their respective playstyles, but it’s likely your skill trees will be fairly balanced unless you go into the game with a set plan.

It should also be noted that Requiem has hefty PC requirements and could use some better optimization with the minimum requirements of a GTX 970 to play the game at low settings with 30 FPS. I was able to hold a steady 60 FPS on medium settings with a RTX 3080m at 1080p, and attempting 4k resolution was laughable. Additionally, there were a couple of visual glitches, such as rats spasming while stuck inside of walls and characters occasionally disappearing, but this rarely had a negative effect on my playthrough.

When A Plague Tale: Innocence was released in 2019, it quickly became my favorite game of the year. It was dark and emotional while combining puzzles and combat in a way that separated it from other games released at the time. Therefore, it should be no surprise that I found A Plague Tale: Requiem to be absolutely brilliant. It expands on and surpasses everything that the original did well. The only difference is the competition is a bit stiffer and it has to settle for my second favorite game of the year.