The game has been afoot for the last week or so as I’ve worked tirelessly to solve the murder on Eridanos. Obsidian’s first-person RPG, The Outer Worlds, has taken on a whole new story with the introduction of its latest DLC, Murder on Eridanos. After much sleuthing and shooting, I’ve finally unravelled the mystery and am ready to reveal my findings. So grab that coffee, kick back and check out our full review of The Outer Worlds Murder on Eridanos. To put some of our readers at ease this will be a spoiler-free review because I’m not a monster.

The Outer Worlds has always had some quest lines that revolved around murders mysteries and whodunits. Even the last DLC, Peril on Gorgon, was a tale about unravelling a mystery. Murder on Eridanos, however, turns the storytelling up to 450°, takes its basic mystery concept, stuffs it inside an enigma and then glazes it with conundrums. It then bakes it until golden brown and serves it at a mystery dinner theatre titled “Whodunit”.

In true Outer Worlds fashion, Murder On Eridanos starts out by throwing you smack dab into the middle of a story and then slowly walks you through to the end. After receiving a distress call, you’re beckoned to the world(I use that term loosely) of Eridanos. This world, it turns out, is a series of floating meteor bits held together by cables and suspended by jet engines. The world itself was a nice change from the barren setting of Gorgon.

In fact, Eridanos floats in stark contrast to Gorgon in a lot of ways. Where Gorgon was essentially a harsh dead rock with some make-shift settlements, Eridanos is full of life, vibrant and people living the high life. A grand hotel, wildlife preserve, and distillery are just a few of the sights to see while unravelling the mystery of Eridanos.. 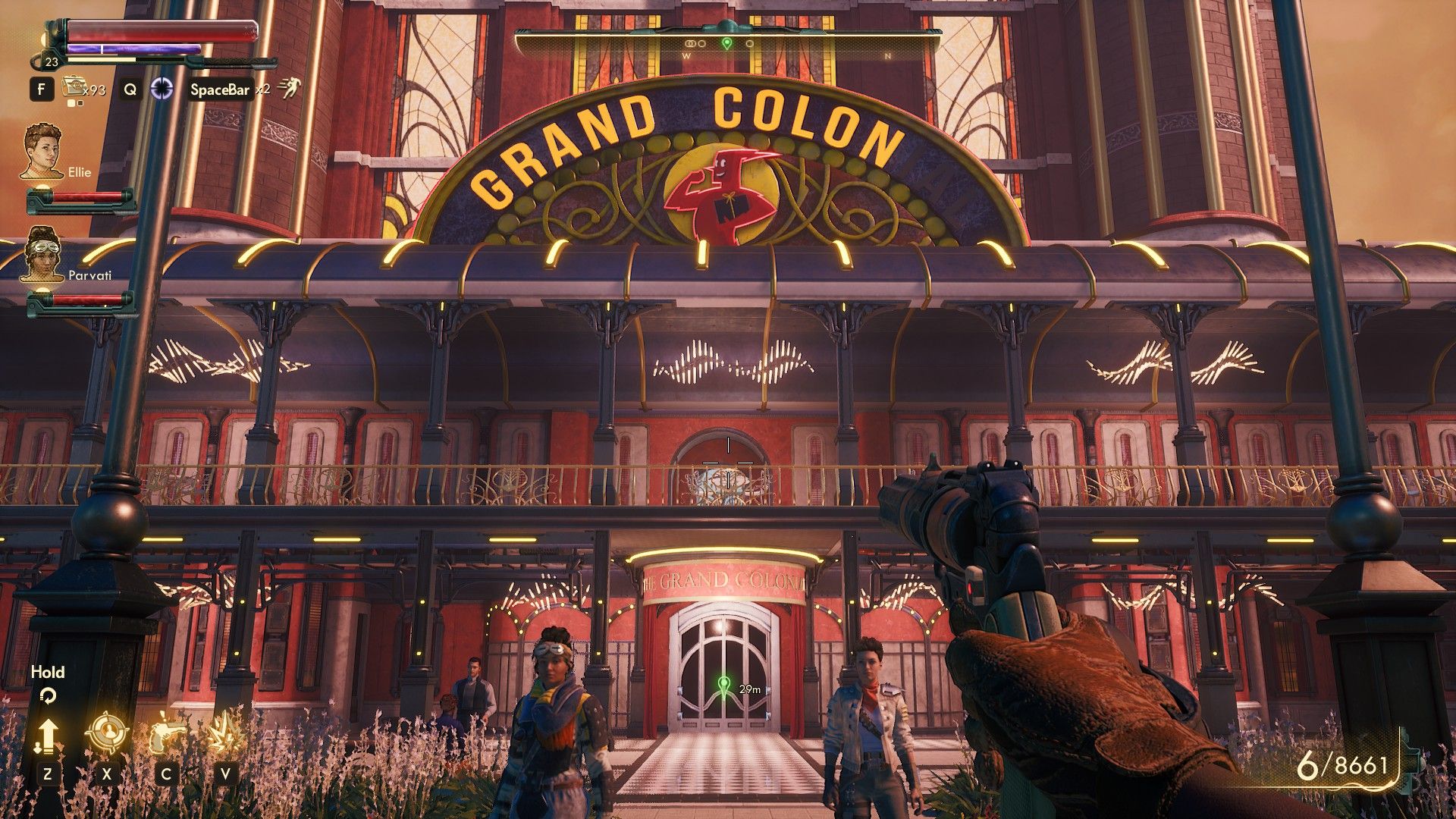 One of my favorite parts about this DLC is the fact that everything takes place on Eridanos. I mentioned in my preview article that the story and world-building felt like Obsidian was developing a much more personal story. I love good grand adventures and traipsing around the galaxy definitely promotes the grandness of it all but after a while, you can start to feel detached from it all.

Murder on Eridanos, on the other hand, feels like a much more personal affair; both in story beats and character interactions. Everything feels personalized and close because everything is happening locally. All of the quests are tied to this single location. Everything feels much more connected.

The problems and tasks presented are hyper-focused around an individual instead of a cause or some grand scheme. This makes every interaction feel like you’re getting to know the victim, their story and why you should feel invested in what’s happening around you. 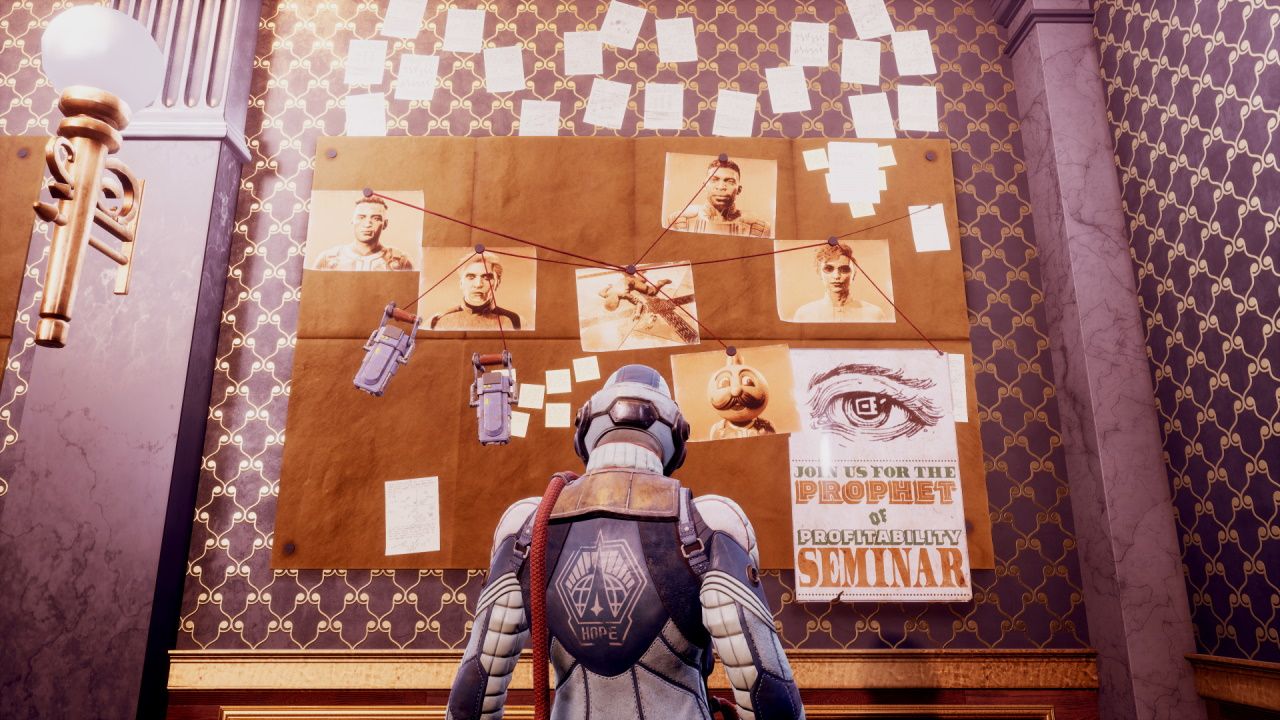 Obsidian has worked hard to present a narrative that continually offers more questions than answers. Clues are delivered through dialogue interactions, log files and your trusty new Discrepancy Amplifier. I do appreciate the dialogue writing and even the logs as it’s the first time in the series that either captivated my focus during gameplay. Constantly on the lookout for the next clue, I read every log and asked every question.

This last tool is an interesting attempt to make you feel like you’re really investigating. In short, the Discrepancy Amplifier uses math and science to deduce what is out of place in a particular location. In theory, it’s designed to help you search for clues; help nudge you in the right direction and offer some interesting and sometimes comical commentary on your situation.

Practically, though, it’s a bit of a mixed bag. On the one hand, I enjoyed having to scan areas, analyze mysterious substances and search for other clues. It actually felt a lot like playing Batman in an Arkham game. Instead of Oracle chirping in my ear though I had the equivalent of Robot from Lost In Space. His responses to scans and inquiries were always a treat.

On the other hand, however, the Discrepancy Amplifier also took away from the whole sleuthing experience. It worked a little too well, oftentimes letting you know that you were passing by a clue and even leaving a blue hazy trail for you to follow to the clue. I can imagine that it would be hard to find a balance with implementing such a mechanic. In this case, it feels a little too much like hand holding for my liking and pulled me out of the immersion from time to time.

One Heck of A Twist

Despite this critique, the story and pacing feel great. Unlike previous story beats, Murder On Eridanos actually gives you a bit of freedom to choose who you think the villain is. After conducting your initial investigation you are given an opportunity to present your evidence and make an acquisition. It felt very akin to coming to the climax of a Sherlock Holmes mystery where he lays it all out as easily as reading an ad from the local paper. It was a fun little story beat that helped sell the murder mystery theming.

Without dropping spoilers I would also say that the story offers a few great twists along the way. There were two moments in particular that went a completely different way than I expected. It was great to not really know what was coming next.

Outer Worlds has always been focused on delivering a humorous and engaging world and story for players to enjoy. That trend very much continues here. Combat and progression are the same as they’ve always been. Albeit a few new weapons and the Discrepancy Amplifier do help mix things up a bit. Ultimately though from a combat and mechanics standpoint it’s the same experience as it was for Perils as well as the base game. It’s a bit of a shame really as it’s always interesting to add new combat mechanics to a game. It can help keep the cycle fresh and breathe new life into familiar mechanics.

This isn’t intended to be a heavy criticism though. Both Perils On Gorgon and Murder On Eridanos really focused on putting the narrative first. In the case of Murder, it knew the type of story it wanted to tell and did a great job at making the whole ride an enjoyable experience. 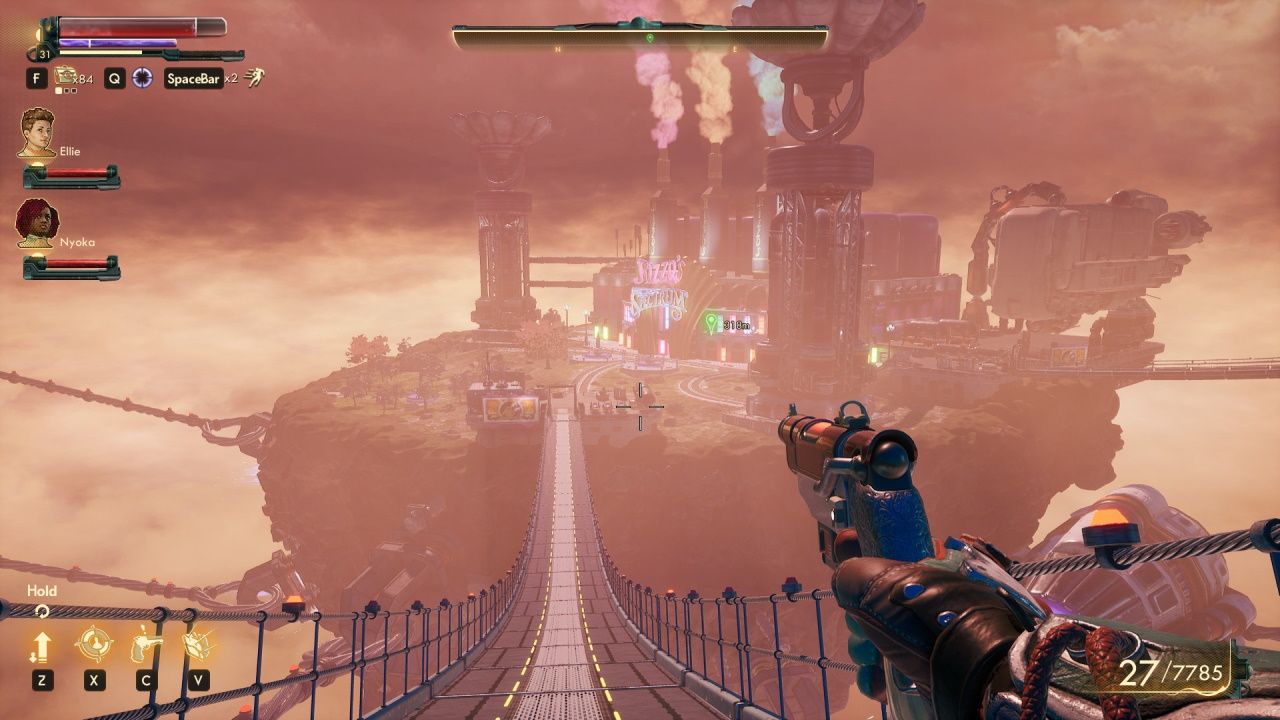 The Outer Worlds Murder On Eridanos is my favorite story in the Outer Worlds. Obsidian did a great job at presenting this murder mystery and created an experience I wanted to explore and adventure in. A bit too much hand holding lead to a few moments of mild irritation and a lack of any new combat mechanics feels like a bit of a missed opportunity. Overall, though, it was a great experience and one I would recommend if you’re a fan of Outer Worlds. The DLC drops today(as of the time of publication) on Steam so head on over there to check it out.