A stray nameless cat befriends a small robotic drone as they embark on a quest to reach the outside of a massive walled city, making friends and overcoming obstacles on the way to unraveling the mysteries behind the world they inhabit. No, I'm not readying a pitch for the decision-makers at Pixar; I'm talking about Stray, the brand-new indie darling from developer BlueTwelve Studio and publisher Annapurna Interactive.

Stray is certainly a unique gaming experience, one that somehow manages to harness the chaotic energy of simply "being a cat" exceptionally well. Orange Catsidy--my self-imposed name for the cat, the game doesn't give you the option to name it--is not a special animal imbued with supernatural powers or even the ability to speak. They're an ordinary, run-of-the-mill orange tabby--and I say "they" because I don't recall the game even specifying a gender--that finds themselves in the slums of a dirty, drab city surrounded on all sides (including above) by walls. Unraveling the mystery with the help of the companion drone B-12 is the main task of the game, and while that story is intriguing enough with plenty of bread crumbs to follow, I don't feel Stray ever reaches the full potential of its own ideas.

Stray puts you in control of the little orange tabby, and after joining with the aforementioned B-12 the two help the citizens of the city by solving puzzles and fetching items. The main gameplay loop has me exploring a city, meeting an important character who gives me a list of items to fetch, which I then go fetch and bring back to that character to move the plot along. Sometimes I'm tasked with traversing a dangerous building because "the robots are too big, but the small cat can get the job done," other times I'm trading an item with an NPC, only to trade that item for a different item, in order to get the item I need to advance. 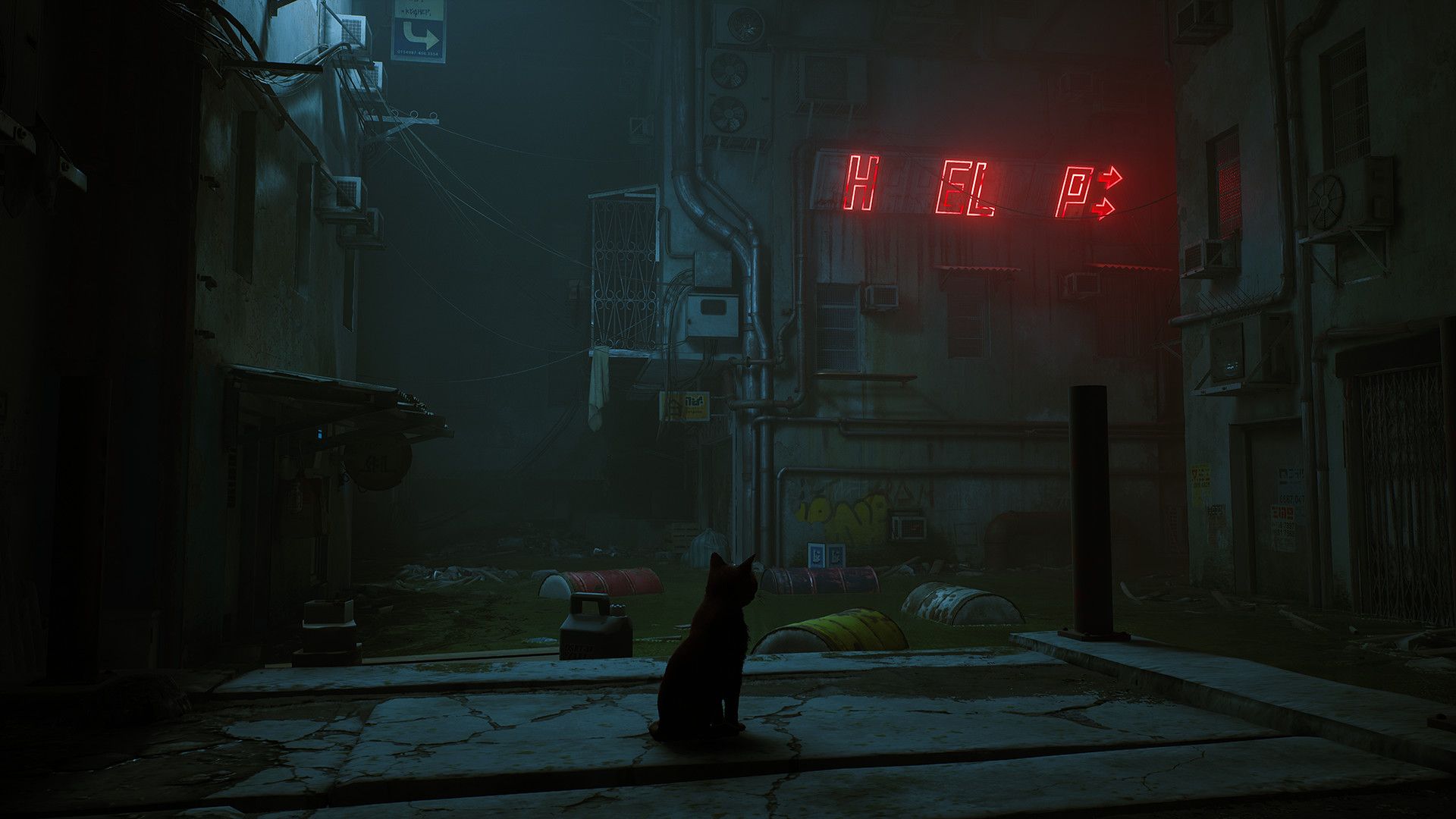 This sounds rudimentary, but the way the objectives are hidden in the world--and more importantly the way the cat interacts with said world--can be devilish at times. Early on in the game there's a robot who can't stop "shivering" and needs a blanket to warm up. Getting that item for the robot reminded me of the Biggoron's Sword quest from Ocarina of Time, exchanging item after item before finally getting what I needed. The "simple to understand, but surprisingly robust" manner of these puzzles make them a joy to complete, achieving that ever-elusive "a ha!" moment when the pieces finally fit.

In playing Stray, there is one undeniable positive: BlueTwelve nailed being a cat. The movements, the small mannerisms, everything about this cat feels authentic. The game lets me walk up to a carpet and knead it with my claws--for no reason. Just because it's there. I can meow on command with a single button press, even during certain cutscenes where Orange moves on their own. If I see a ledge with bottles on it, guess what--those bottles are about to meet the floor below. It's wonderful just being a cat, doing cat things and generally making the robots strewn about the city happier by just existing.

Nowhere is this better exemplified than the DualSense controller, which adds a wonderful sense of realism to this feline feeling. When I press the button to meow, the sound comes through the controller and the television. If I find a place to scratch, the buttons require more force to press as Orange leaves his deep claw marks. When Orange carries something in their mouth, I can feel the slight vibrations of something hanging just below the cat's chin as I walk around. It's super cool, and brings me into the experience that much more.

Perhaps my favorite cattribute is sometimes finding a pillow, couch, or other area to press a button and sleep. Just conk out for a cat nap as long as I want the cat to lay there. There's even a trophy for letting the cat stay asleep for an hour, the camera panning out in a made-for-desktop background shot of wherever they are in the city. While Orange is sleeping, the DualSense slightly vibrates as the cat's blissful purrs ring out from the controller's speaker. There's no rhyme or reason for some of these things to exist in Stray other than "a cat would do this in real life" and I love that about this game. 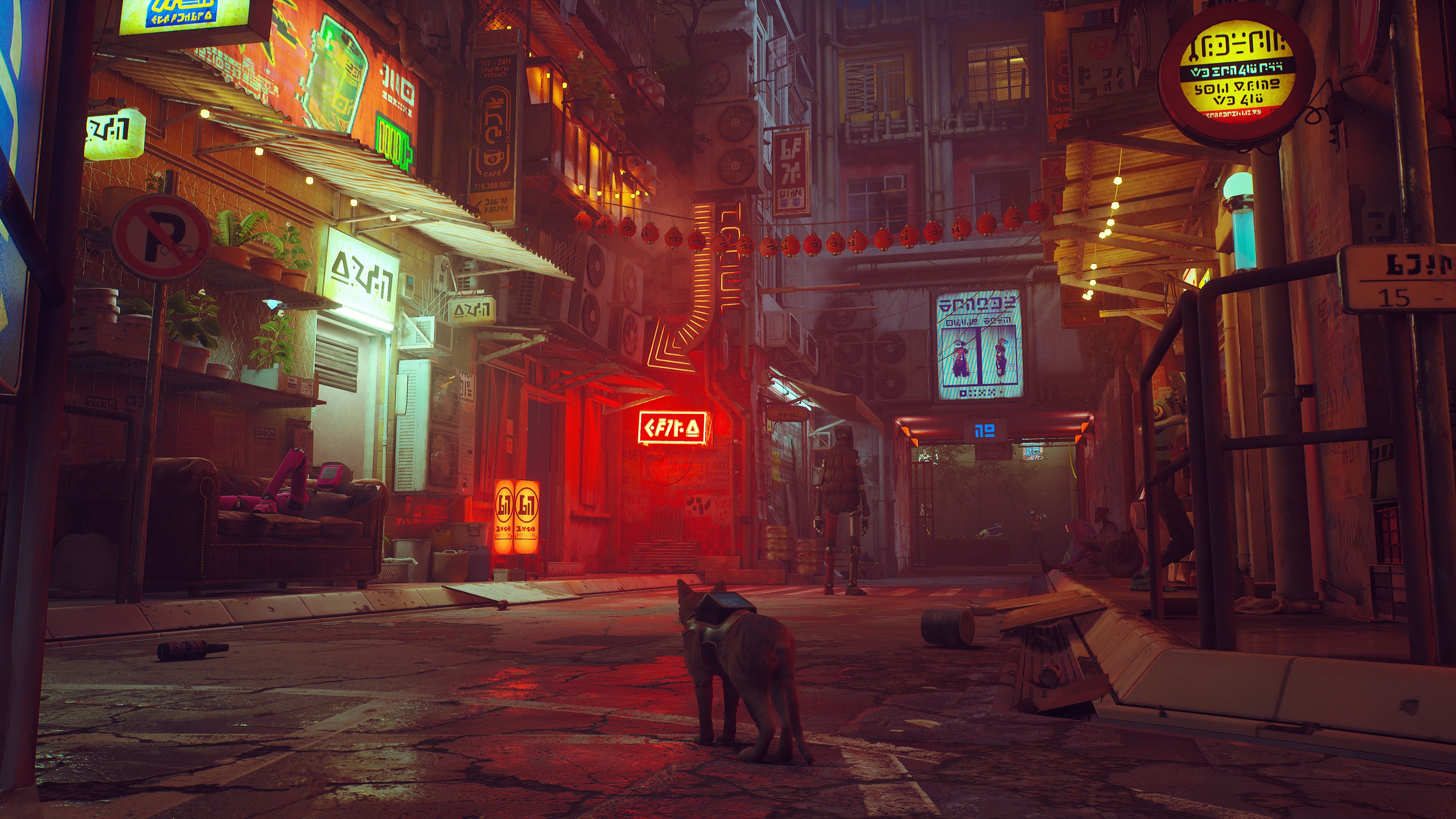 Even though I'd love to say the game is just one big catnap, there's an overarching story to behold here, and its implications are surprisingly dark. Despite being designed as companion robots to aid in daily life, when the humans disappeared these robots just…became them. Dressed like them, acted like them, even lived like them. During the journey Orange meets with all manner of robotic personalities, from a noble Guardian that protects the city from the lurking biological threat, to a father-son duo with more personality than other games can muster, to a group of collaborators that are trying to bust out and see what the Outside is all about. Without getting too deep into spoilers, it's a thought-provoking tale of the nature--and more importantly meaning--of life, told through the eyes of a little kitty who's just passing through.

Which brings me to my biggest beef with the story: the title character, the Stray, my pal Orange Catsidy…they're not essential to the story. Sure the cat is solving puzzles, interacting with characters (through the drone, who's translating), and moving the story along, but the stakes for the cat itself are little more than "get back outside." There's some dangerous moments, like the running scenes where Orange is being chased by the monstrous Zurks--the biological threat I mentioned earlier--but those moments are few and far between. The environment and the citizens within do the heavy story lifting, making the cat just…there. Any other animal could replace the cat and the story would remain the same, there's nothing that says "this has to be a cat," which renders a major selling point of the game moot. I'd hoped to learn more about the city, the robots within and the lives they lead begging to be explored, but outside of the few we interact with those stories are mostly left untouched.

That said, I ultimately did enjoy my time with Stray. I spent about eight hours total with the game--though the last hour and a half of that was backtracking for things I'd missed--and while I have a lot of questions about what exactly happened here, I am happy with the end result. The tale of Orange Catsidy and the world they lived in continued to unravel in my mind long after I'd found everything, piling up new questions that I hoped are explored in whatever future content BlueTwelve has planned. It's not going to unseat some of the bigger titles of the year, but as a fun and unique experience Stray is the cat's meow.