The corruption has left me incapacitated and the enemy has captured me. Awaiting to be rescued I spectate my teammates, the Ogryn is surrounded with another armored Ogryn in front and the horde around him. The two Psykers are doing their absolute best to keep the horde stunned and damaged while the Ogryn focuses on the big guy in the room. Finally, my Ogryn ally manages to overpower the enemy and once the other big guy was killed my team made mush of the horde. All the while I’m still  very far away and still need rescue. Welcome to Warhammer 40000: Darktide.

Warhammer 40k: Darktide is a hack-and-slash, FPS, multiplayer mission-based extraction game. This means that while there are mission objectives, there is no true campaign. This means players, also known as Operatives, spend their time completing various missions, choosing from between seven different types, from espionage objectives to straight-up assassinations.

Completing the main objective and extracting pays out dockets, the in-game currency, and operative exp. Further, missions can randomly have secondary objectives. Currently there are two types of secondary objectives in the game collecting 3 scriptures and seizing 2 grimoires. Both missions pay extra dockets and exp for every scripture/grimoire acquired in the mission.

To even get into a mission you must choose a class and customize your operative. There are four class types in the game: Veteran Sharpshooter, Ogryn Skullbreaker, Zealot Preacher, and Psyker Psykinetic. Each class comes with its own ability, which, in my experience, shapes the class. The sharpshooter has volley fire, designating priority targets automatically, and increasing the damage of critical hits. The Ogryn has Bull rush, smashing through hordes to kill/disable enemies. The Zealot has Chastise the Wicked, boosting them forward, increasing the damage on their next melee hit, and replenishing half their toughness. Finally, Psykers have Psykinetic Wrath pushing enemies in front of them back and reducing some of their peril bar. 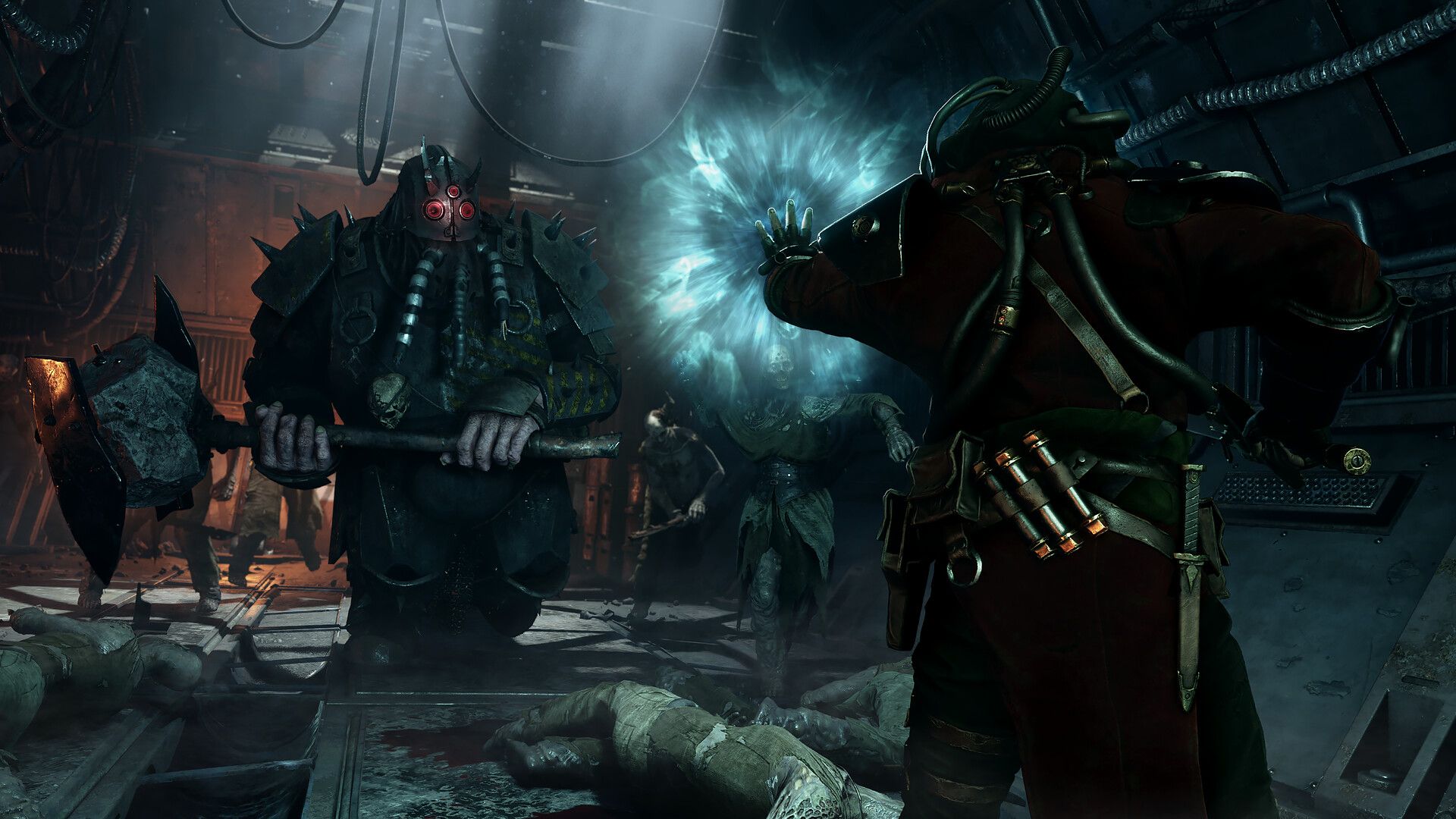 Each of these classes, unsurprisingly, plays differently from the others. My favorite so far is the veteran sharpshooter, as it feels the most like an FPS to me. On the flipside the Psyker is in my opinion, the most powerful of the classes. With that said, the nuance and difficulty of the Psyker have barred me from harnessing the warp. Each class fits with every playstyle differently and due to feats, the sort of perks of each class, each role’s play style can be warped around the player. These roles and feats allow each player to feel at home or be challenged by any role.

With the role's uniqueness aside, Darktide is extremely repetitive. Even though there are seven mission types the gameplay stays relatively the same. In every mission, you fight a horde to get to your first main area to activate a switch. Then while you wait for the switch to do something you fight a horde to protect you or it. Then that switch either unlocks the next area via door or elevator. This process rinses and repeats until the main objective.

The main objectives feel somewhat unique, but the fighting remains the same. You are either fighting hordes while defending a teammate who is interacting with the objective in some way, defending the objective itself, or you are fighting a boss to complete the objective. Because the loop is pretty repetitive one would hope the enemies are unique, right? Well, sometimes they are uniquely positioned, but the encounters with them are in no way unique.

Every single horde encounter usually means dealing with the enemies at range for as long as you can then getting down and dirty with melee, or for the Zealots and Ogryns, getting up close and personal asap. Because of the fact that the missions are generally the same and the horde encounters always involve the same methodology these two gameplay loops become just something to grind through after levels 20-25.

The grind is a point of interest in Darktide as it is slower than many other games I have played. This means two things, first, you will spend a lot of time before you are at max level getting an understanding of your operator. This makes the slow progression in Darktide seem good, except the flipside is there are many levels where you don't unlock anything that helps gameplay. Further, the progression seems to be just in a spot where at level 30, the maximum rank, you can do level 4 missions with some challenge, while level 5 missions are still extremely challenging. This is remedied by the market and equipment system but is still slow nonetheless.

In Darktide operators unlock equipment through leveling up. Naturally, as you level up you can buy and upgrade better and better equipment. As mentioned before, this system is a supplement to the leveling system, allowing you to strengthen your operator with better gear, without necessarily having better abilities. Equipment becomes most important when your operator is level 30. After level 30 you can no longer rank up, and you will no longer unlock further feats. To be able to even have a chance at completing the difficulty 5 missions, the hardest in the game, you will need to max out your weapons and equipment to their full potential.

Darktide’s visuals have their ups and downs. For gamers with high-end systems, able to render the game with perfect frames with Ray Tracing on, this game is extremely visually impressive. Ray tracing adds atmosphere and vibrance in an otherwise dystopian environment. Atmospheric additions like real volumetric smoke hangs in the air, the light realistically bouncing through each particle such a welcome addition to help set the mood. 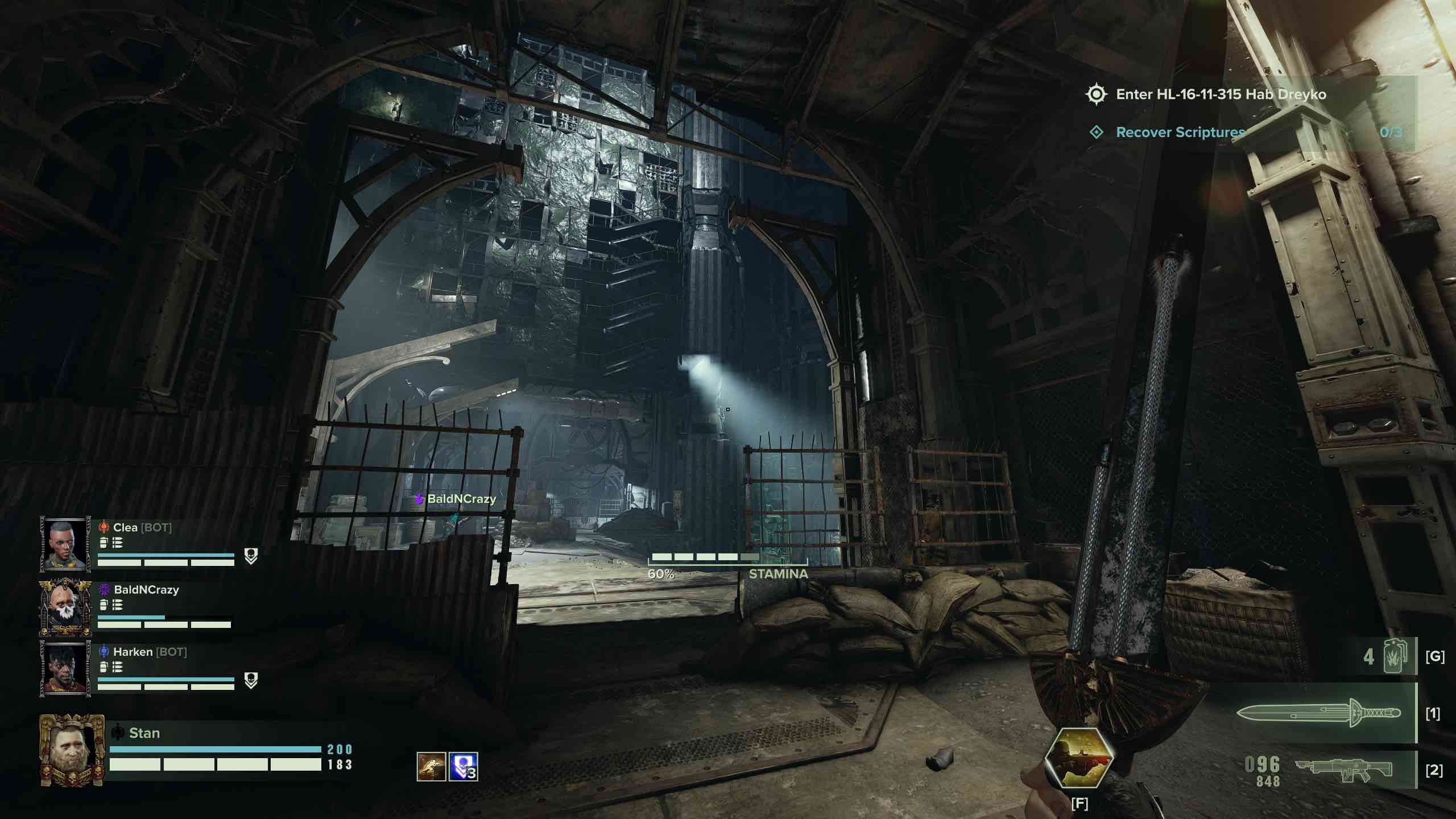 As soon as you turn ray tracing off Darktide, though graphically still good, has nothing specifically special over any other game currently. Worse, when these features are turned off, some of the atmospherics appear like very low-resolution textures and abruptly rip me out of the immersion that the new Warhammer offering does so well.

The environment, though impressive in the new Warhammer offering, is just step one of the immersion. You and your 3 teammates are escaped prisoners from a destroyed prison colony, you have dedicated your life to the “God Emperor” and that religion is present in every aspect of this game. The characters are constantly bantering amongst one another within the mission, and killing feels very satisfying. All of the gore elements make the magic and power weapons feel immensely destructive. The lore in the Warhammer franchise has always run deep and this game is no exception to that rule. Other than when the lighting is buggy or when other player names reference pop culture, I am immersed fully.

Overall, Warhammer 40000: Darktide is an immersive, fun experience that allows players to shape the game to their playstyle while still challenging them to adapt to the game mechanics. Darktide delivers graphically with RTX on gameplay but is nothing special when RTX is off. Further, though the gameplay is immensely satisfying and challenging, the repetition leaves much to be desired. Warhammer has great potential and opportunity to build a truly unique experience for gamers who want to take on its challenge and serve the God Emperor’s just will.