On August 20, 2019, Remnant: From The Ashes was released. I had the opportunity at that time to play the game with my wife extensively. She immediately loved Remnant, but for me, it took a while before I started to enjoy working my way through the various levels and throwing myself repeatedly against some of the tougher bosses. If you enjoyed the challenges, progression, and story of Remnant, I say with confidence that you will also enjoy this new DLC. It is more of the same and picks up where Remnant's story left off. This is our review of the Remnant: From The Ashes – Subject 2923 story DLC on Steam.

If you have not finished the original campaign, I highly recommend that you do so before playing the new DLC. I stopped my first playthrough due to a reoccurring bug and ended up having the original story ruined when I restarted my campaign to do this review. It spoils a few things during the first cutscene and then more of the original plot when you jump back to Ward 13 for the first time.

The original campaign could be rough at times, especially in the swamp biome before a patch made some balancing changes to that area. Your progress could come to a halt quickly until you got the timing down for dodging certain enemy/boss attacks or/and upgraded gear. Remnant has been compared to Dark Souls and similar games by some players, but in my opinion, that is not accurate. It is a survival action shooter, and even on normal difficulty, many players are going to have a rough time compared to other more forgiving titles. While some mechanics have similarities to other souls-like games once you acquire some decent upgrades, gear, and traits the progression becomes somewhat easier. The Subject 2923 DLC is no different. 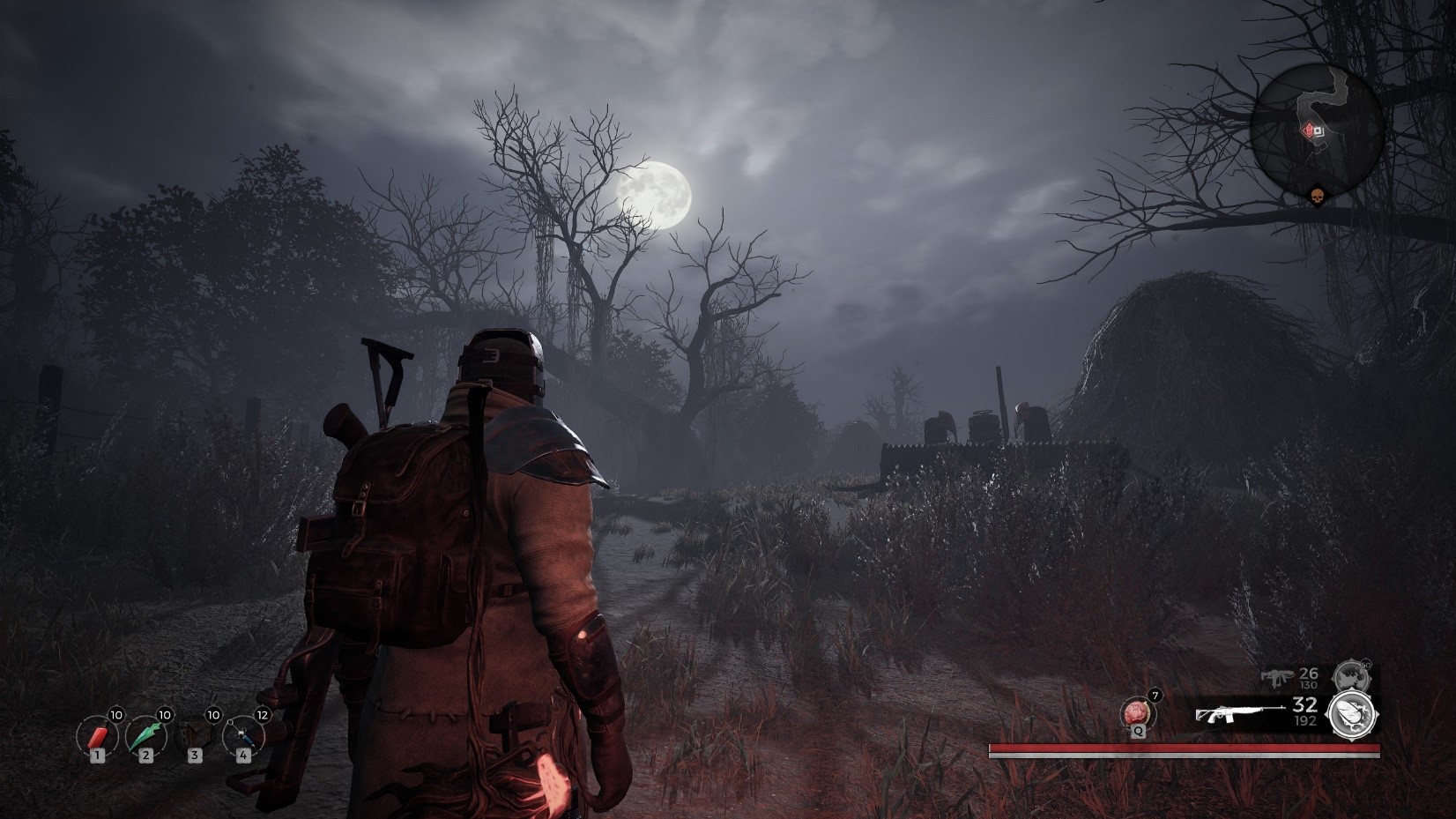 The team at Gunfire Games has done a great job with the atmosphere, successfully getting me back into the story and feel of the Remnant world quickly. The few short in-game cinematics are very good and the voice acting is still top notch, if somewhat limited. Creeping my way through dilapidated barns and hay fields while peering around corners and into haylofts for anything that moves felt great. Everything was gloomy and dark, while I am not a huge fan of most post-apocalyptic settings, something about the Remnant world strikes the right chord. The story itself is still a slow burn, just like the main campaign, but it is told well and the combat will keep you engaged in between plot points. 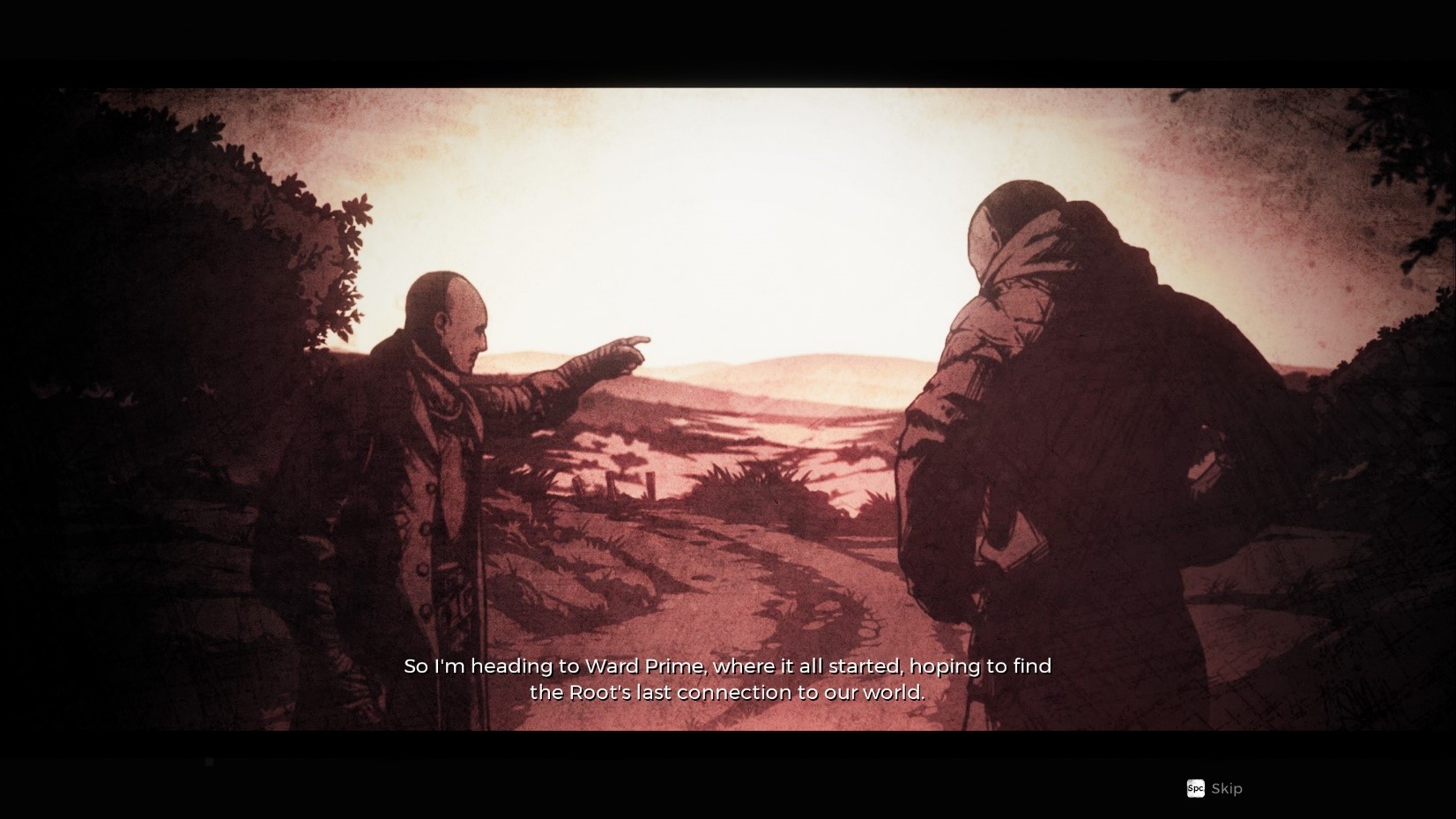 You once again are facing off against the Root in this DLC on your way to Ward Prime. The goal is to figure out how the Root is still invading. Along the way, you will encounter new enemies, including rat-men and other R.O.U.S. (Rodents of Unusual Size). After arriving at Ward Prime, I enjoyed the exploration element to advance the story by unlocking areas, finding logbooks, and accessing computers. It was a great throwback to how the original campaign started in Ward 13. I did find that the new logbooks were positioned a bit farther away from the player camera making it harder to read the actual page, but you could still use the “Read” button it just took away a bit from the immersion. 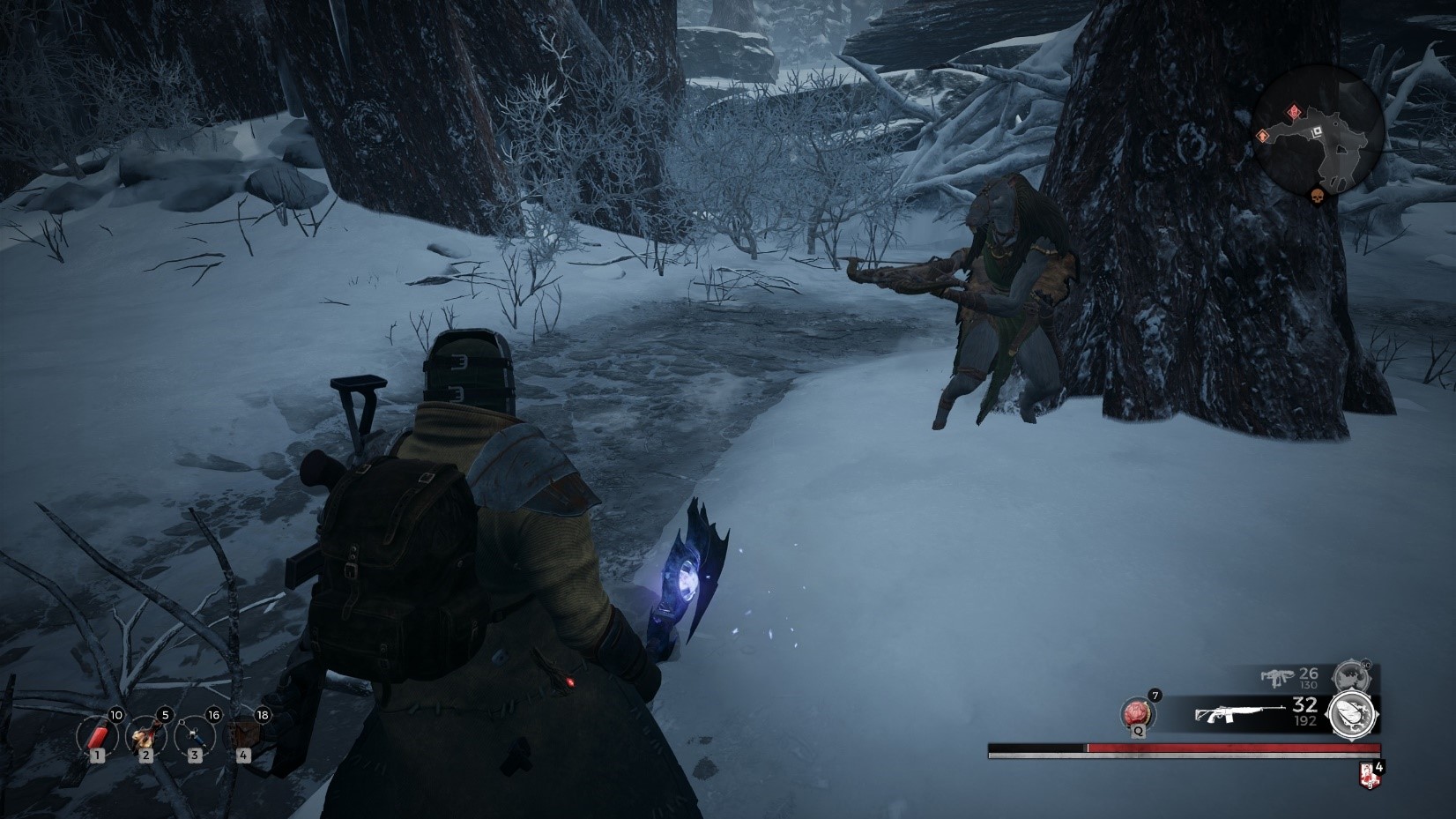 Combat in the game is still a great experience once you get used to the difficulty/challenge, depending on your skill level as a player. Over the past year, the development team has done a great job patching the game and have successfully eliminated many of the bugs I noticed shortly after the original release. Right out of the gate, the new DLC is a very smooth gameplay experience.

Fighting rat-men for the first time was a treat as they leap through the air trying to kick me in the head. Dodging is smooth and responsive, if I got caught in an enemy’s attack, I deserved it. The gunplay, while not perfect, is excellent and I was still having those great moment where I would be reloading as enemies charged at me from only a few feet away. While I could see that the enemy attacks are very similar to others in the main campaign the new bosses have been a fun challenge and visually interesting. Plus, I get to collect new weapons and other goodies, I have a hard time complaining about more stuff. 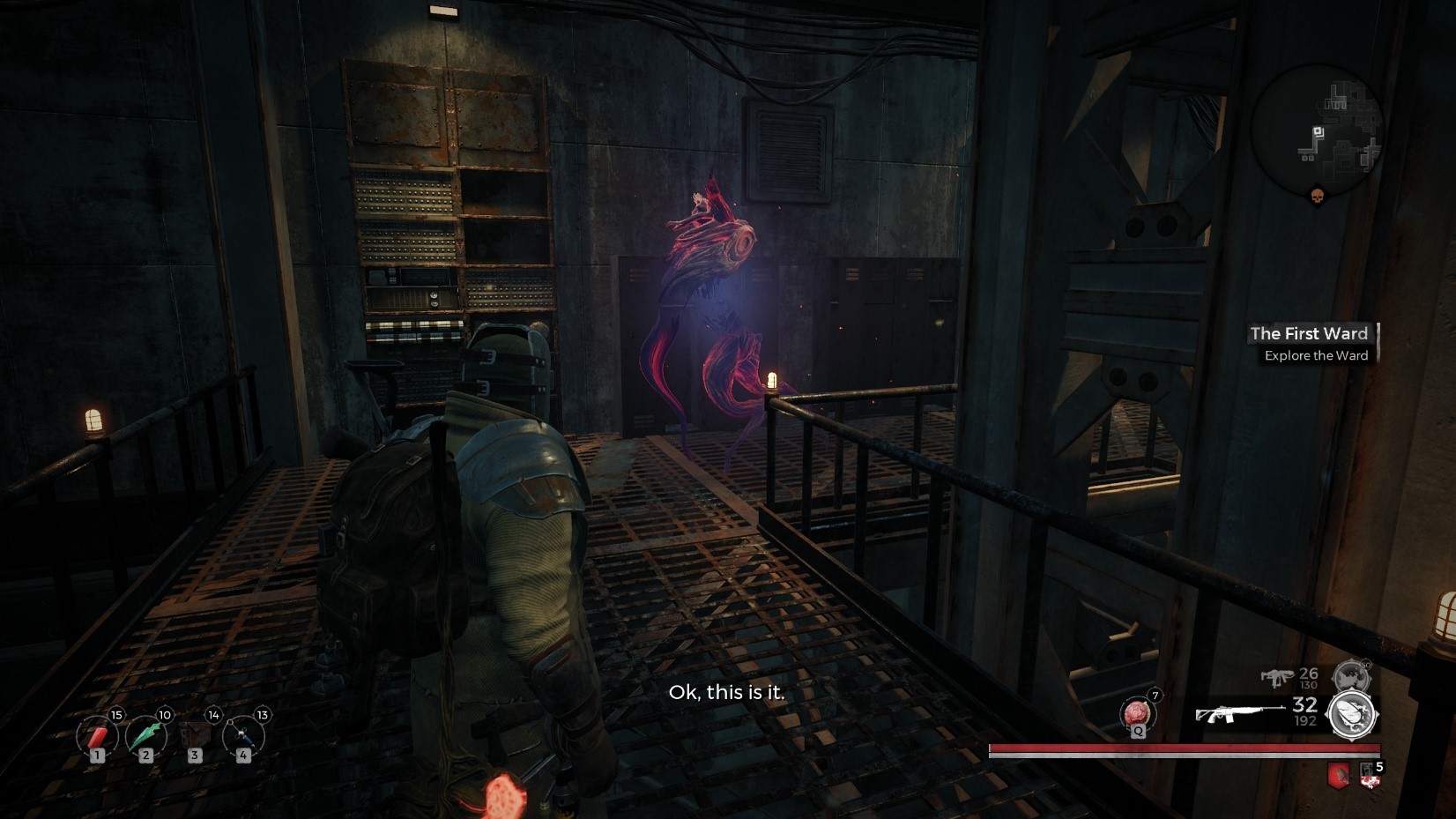 Unfortunately, there is one gameplay element that I personally found disappointing/annoying. While exploring Ward Prime, you need to shift back and forth between realities to access new areas, doing so exposes you to being hunted by a few invincible enemies. It didn’t help that this reminded me of a bug I encountered shortly after release with randomly invincible enemies appearing on any given map. If invincibility is overused such enemies end up becoming more of a nuisance than anything else and can quickly ruin my gameplay experience. Thankfully once you’re done exploring Ward Prime, you are also finished dealing with these invincible “hunters".

I also experienced two other main issues that have caused me some frustration. The first problem occurs when grouping with others. You still need to make sure that your power level is within a limited range compared to the other players in your group or the enemies are going to be tough, if not impossible, for anyone who is on the low end of the scale. This issue is disappointing since co-op play in Remnant is a lot of fun, if you don’t at least try it once you are missing out. I was hoping by now there would be better scaling in place so that everyone in the group would be on an equal power level. I would love being able to grab my favorite character and jump into a game with friends for some fun.

Second, the reason why I stopped my original playthrough, last year, was due to a random crash/freeze bug. Just after a patch dropped it started occurring randomly, I would lose my progression on a map after having to shut the game down in the task manager. At the time, I tried all suggested solutions, including a reinstall, with no success. So here I am, now enjoying my experience with the new DLC and... my game suddenly freezes... it happens three times before I do a quick search online for solutions. I find the same threads as before updated for 2020, it seems that a limited number of other players are experiencing issues as well. The “fix” thread/articles are also now more extensive and detailed with step by step instructions. Thankfully after implementing a few of the suggested changes to the Nvidia Control Panel the issue seems to have been resolved. It is a year later, I have no issues with over 95% percent of games, why is this still a problem in Remnant? Other than the freezing I am happy to say that I have not encountered any other bugs or glitches.

While the new Subject 2923 DLC for Remnant: From The Ashes doesn’t do anything new it is a fun and great addition to the game. If you are looking for more of the Remnant world and story, then you cannot go wrong with picking up this DLC. For players who are new to Remnant, I highly recommend playing through the main campaign, though you can jump directly into the DLC if you don't care much about the story. Just be aware that some players are still experiencing random freezes/crashes. Such bugs can cause you to lose progress, and it takes you out of the moment abruptly. It is especially frustrating when you are only two steps away from the next progress checkpoint and have to restart the map. If the freezing and group scaling issues were fixed, the Subject 2923 DLC would easily gain at least another point on the final score.

A game key was provided for the purpose of review.