In Phantasy Star Online 2: New Genesis (PSO2: NGS) you’re graciously welcomed to Halpha when you crash land and get pulled from the wreckage by Aina and Manon, two new friends. By now, you’ve already created your character, or transferred a character from the previous version of Phantasy Star Online 2. If you’ve transferred a character from the original version of the game, you’ll be happy to know that all of your cosmetics will transfer, and even some of your weapons, albeit at a far lower power-level than the original game. 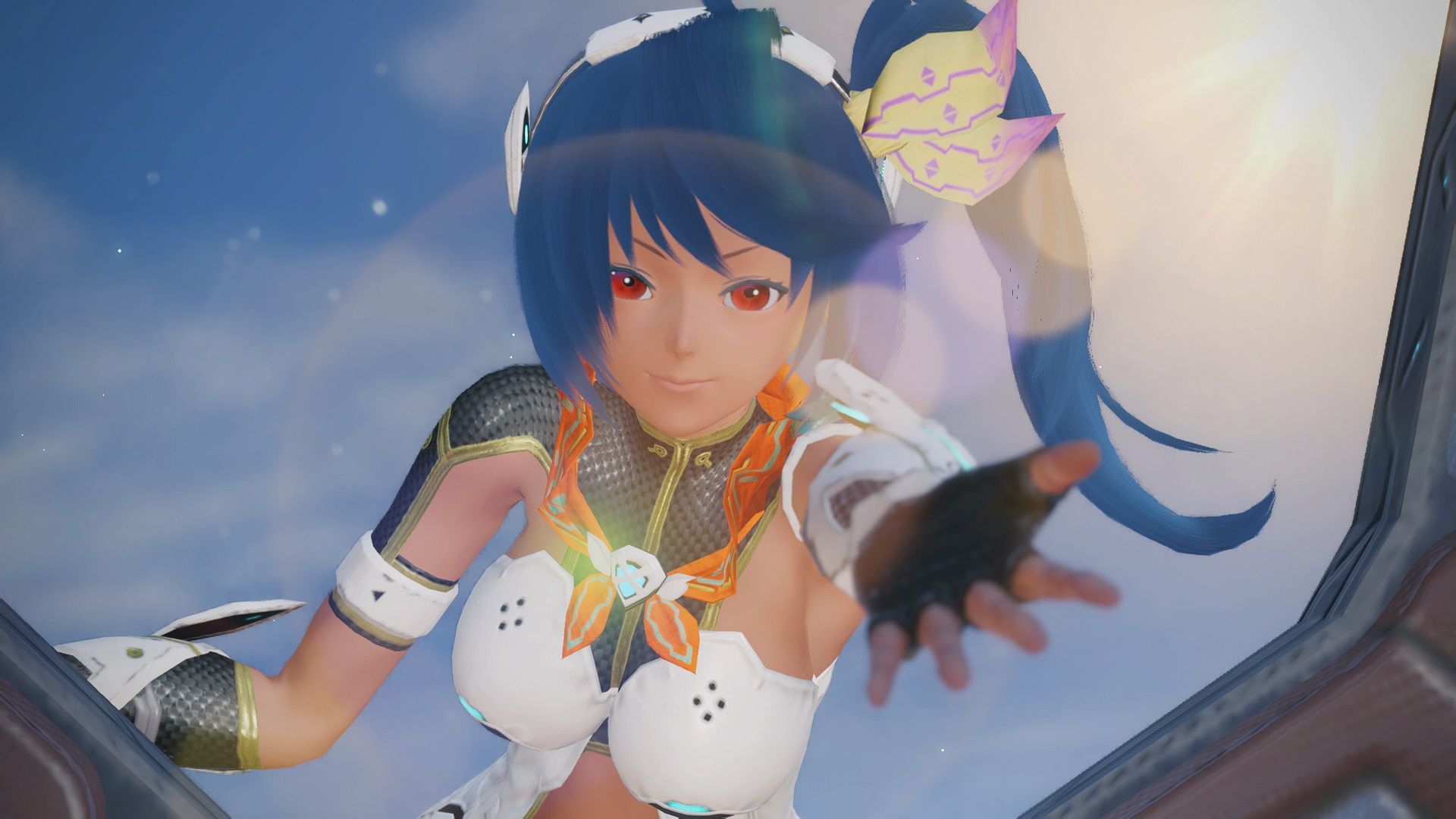 The character creations screen will be familiar to any gamers that hopped into Phantasy Star Online 2, with some modest changes. For starters, there aren’t exactly male and female labels, only masculine and feminine options, and while there are characteristics of some of the races in PSO2 such as Humans, Deumans, CASTs, and Newmans, you can mix and match features from each of these races to create your own unique hybrid. This was a fantastic change, as I was finally able to keep my human body, while outfitting myself with a fashionable CAST head. The changes to sex and race are completely cosmetic, and there are few restrictions on what you can actually do. Custom skins for weapons and clothing can also be easily transferred from the old version of the game to the new, a feature that I was glad to make use of after collecting plenty of cosmetic options since PSO2 global launched.

Graphically, the game has been enhanced substantially, and some of the hair and face models look leaps and bounds ahead of the blocky textures of the original. Unfortunately, when bringing some characters over from PSO2, NGS can only put so much lipstick on those pig features, and some of the hair models still look pretty jagged and not nearly as fluid as the gorgeous feathery locks made popular by the NGS teaser trailer. Once you’ve outfitted your character, you then move on to selecting your class. Phantasy Star Online 2, after nearly a decade has introduced 13 classes to the game, but NGS allows you a selection of 6.

It’s important to note that, while the 6 available classes, Hunter, Ranger, Techter, Fighter, Force and Gunner, aren’t new classes, the skills and skill trees have been revamped, which makes the experience while playing them completely new. I selected a Ranger as my main class, and moments later, my descent onto planet Halpha began. It’s a wonderous and beautiful landscape, if it weren’t for that pesky perpetual war with the DOLLS. 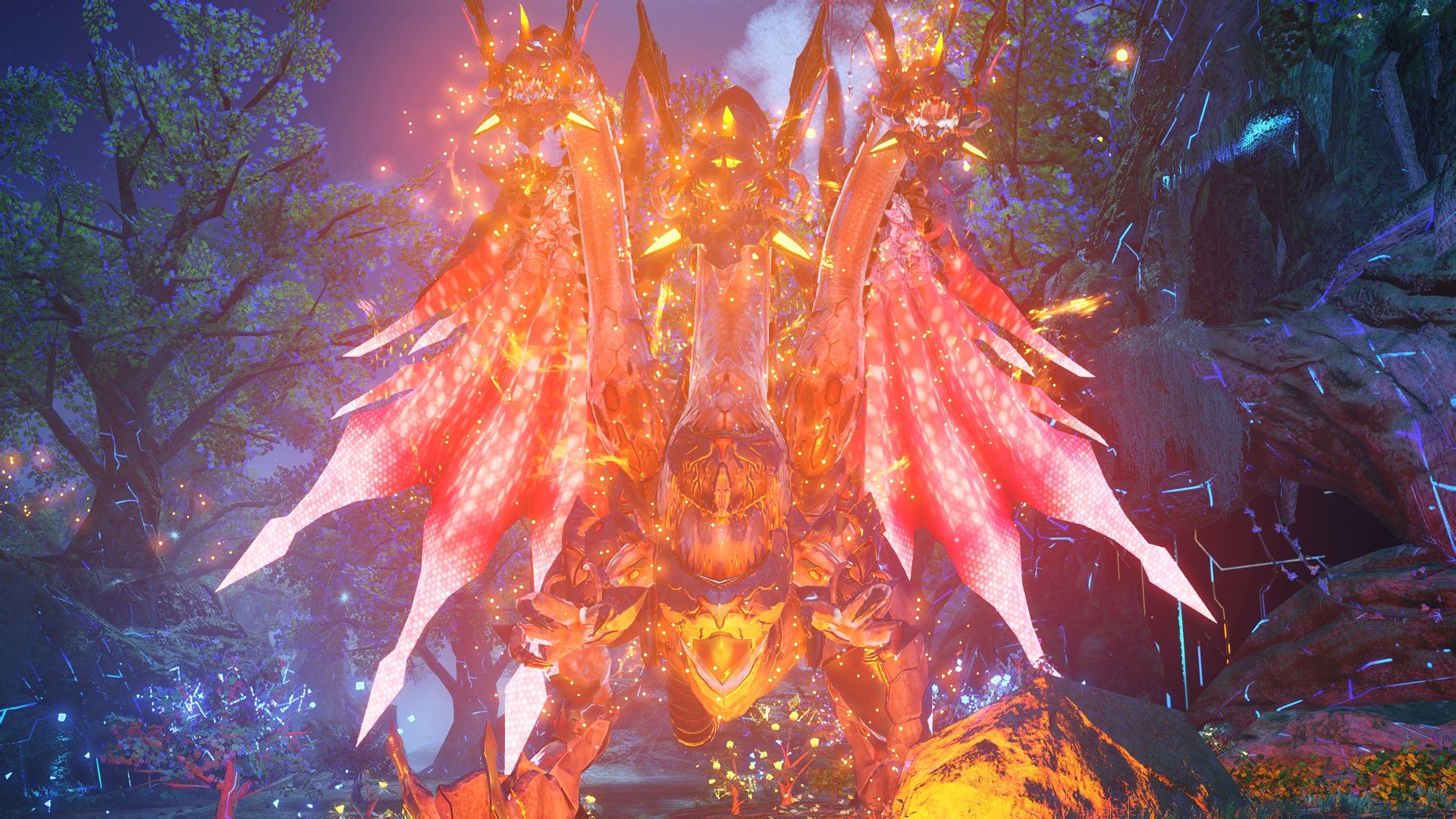 New Genesis is more than just a graphical update of the aging game, Phantasy Star Online 2. Yes, the new shiny visuals go a long way to bring the game into our current generation, but these enhancements only take New Genesis so far. Probably the most notable stand-out feature is the presence of the open world. In Phantasy Star Online, players would sidle up to a quest counter and pick from a steep list of biomes to travel to. In NGS, leaving the safety of Central City organically puts players against all manner of enemies they will have to overcome to progress through this new world.

Level design is straight forward, with one major caveat. In order to progress your class trees, you'll need to complete Cocoon and Tower quests, which are pretty much mini-dungeons. Completing these quests, which have a suggested minimum battle power requirement but otherwise can be done at any time, will reward you with skill points that increase your Battle Power once you pick your skills from the skill trainer. Once you earn these skill points, they are available for both your main and sub-class, and any additional classes you end up swapping to later.

One substantial change to the leveling structure is Battle Power. Battle Power is most closely related to a gear score, but it also takes into consideration how many skill points you have, and your class level. In PSO2 you could head to the quest counter and run almost anything, even on a lower difficulty if you had to. In NGS you’ll be held back by your Battle Power if it isn’t high enough for some content. Urgent Quests and the higher-level content require that you have at least 1184 Battle Power, and earning it can be a slog if you aren’t cognizant that there are some hefty meseta (in-game money) costs to leveling high rarity gear, and you start to feel the leveling curve once your quests run dry. 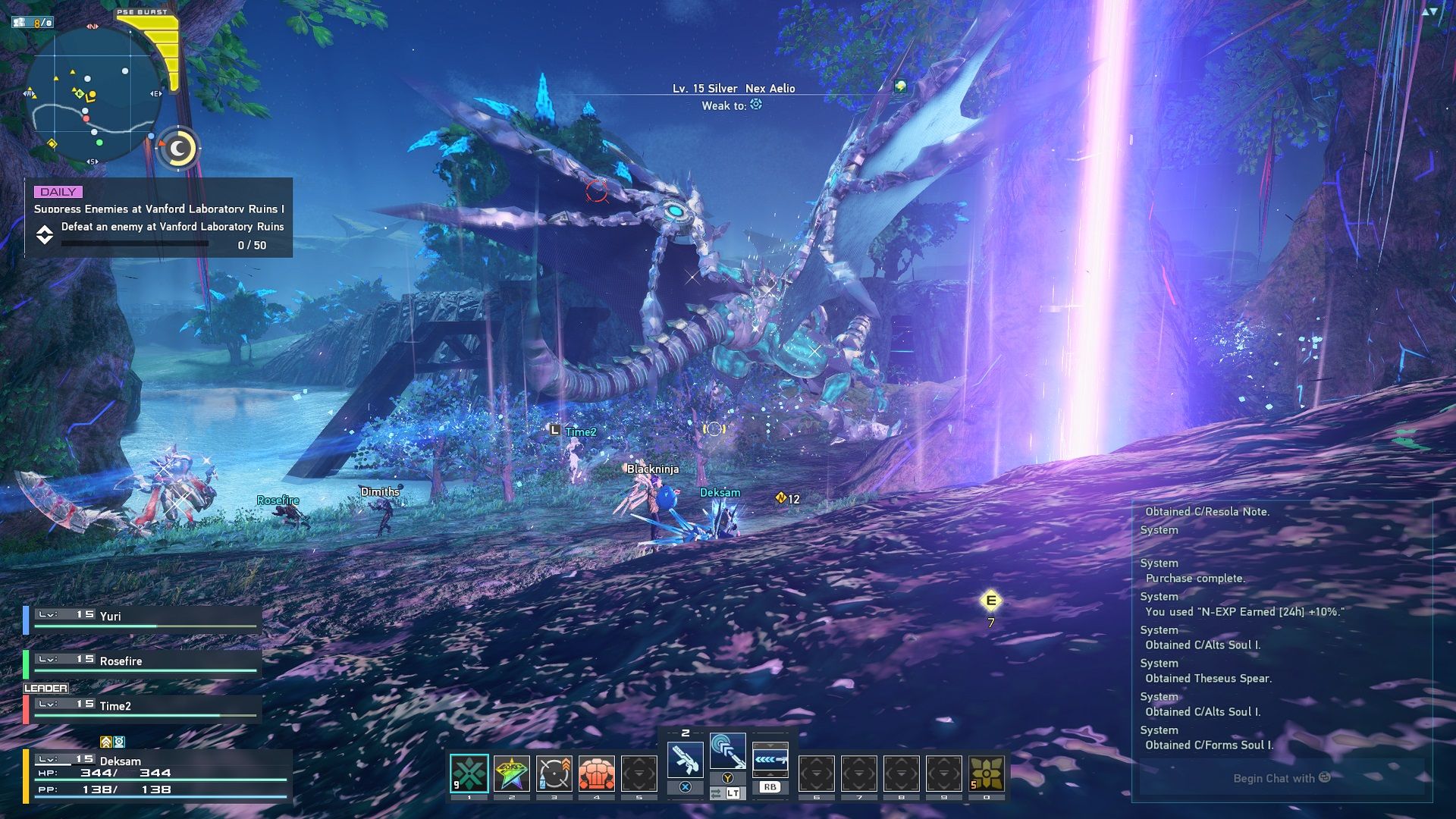 The Quest for Combat

In terms of questing, there aren’t a ton of available quests, like in PSO2. Daily and weekly quests will certainly aid in your meseta and XP journey, but most of the time, if you want consistent XP, you’ll need to get out and grind for it. Once your Battle Power reaches the 1184 threshold, you can move on to Tier 2 areas, where enemy levels increase, and so too does your XP gain. There are specific combat areas where your PSE Meter will increase as long as you continue to kill mobs in those designated areas. Once a PSE Burst is achieved, you’ll likely get a few rare enemies to spawn, and once it hits a climax, you’ll get a rare world boss that can give an abundance of XP once defeated.

During the beta for PSO2: NGS I was happy to report that the faster pace of combat, spurred by the new traversal abilities, really made a difference to the overall feel of the game. The world of Halpha isn’t exactly enormous, but it is littered with mountainous regions, aerial obstacles, and dilapidated ruins that requires you to bound from one area to the next quickly to beat back your next cluster of enemies. The traversal dynamic is a lot of fun, and the addition of movement-focused Cocoons brings an enjoyable dynamic to the game.

The fun and flow of combat also gets compounded by the introduction of multi-weapons. By combining two weapons of the same series, usable by either your main or sub-class, into one, it gives you skill options from both weapons, on a single weapon layout, making combat a lot more fun, and inclusive. My Ranger merged a rifle with a launcher, and it opened up a lot of possibilities for mobility, single target, and AOE damage that I didn’t have by using only one of the weapons alone. 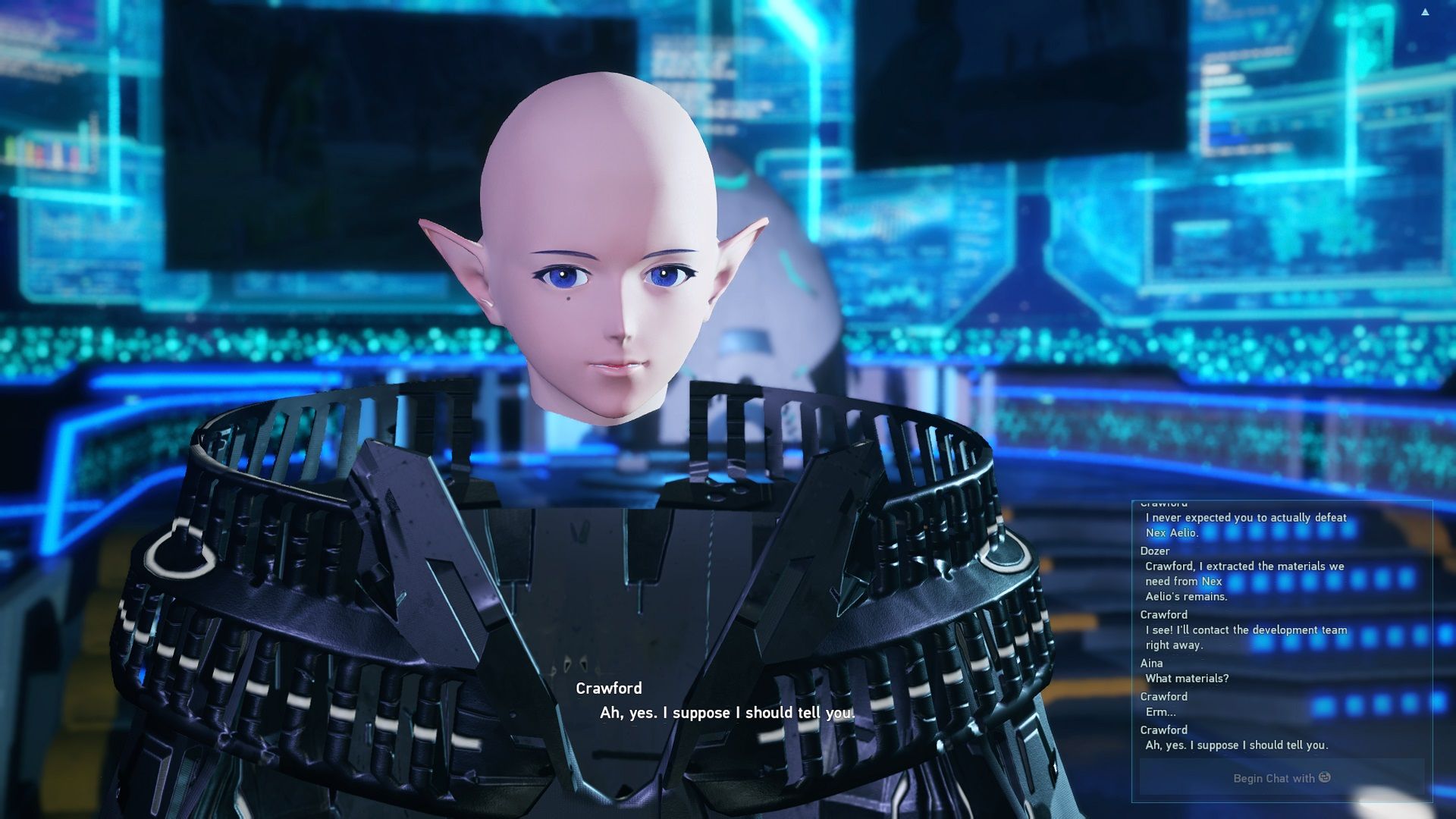 Not everything in PSO2: NGS is an upgrade from the original game. Some could argue that most MMO’s or online games suffer from some performance setbacks at launch. NGS went through some initial growing pains that have started to slow, but attacks registering late are still common place. Lag doesn’t always hit during combat either. When transitioning between one area to another in the open world, sometimes I run into a massive spike of lag, that brings back nightmares of Vanguard: Saga of Heroes “chunking” of landmasses when you traveled throughout the world. Graphical glitches are also apparent whether you're in cutscenes or traveling throughout the varied landscape. I anticipate fixes from SEGA are on their way, but for now, performance is still a noticeable problem.

As more of a personal letdown of mine, I miss having a Mag that is more functional than just pinging me when something I haven’t unlocked is near. The current Mag that follows you around is helpful to a degree, but it is nowhere near as useful as the Mag in PSO2. Yes, we have the mighty Region Mags that provide helpful buffs once you’ve fed it enough, but I loved feeding my personal Mag in PSO2, watching it evolve, and having it help me throughout my journey in ways that I found beneficial. 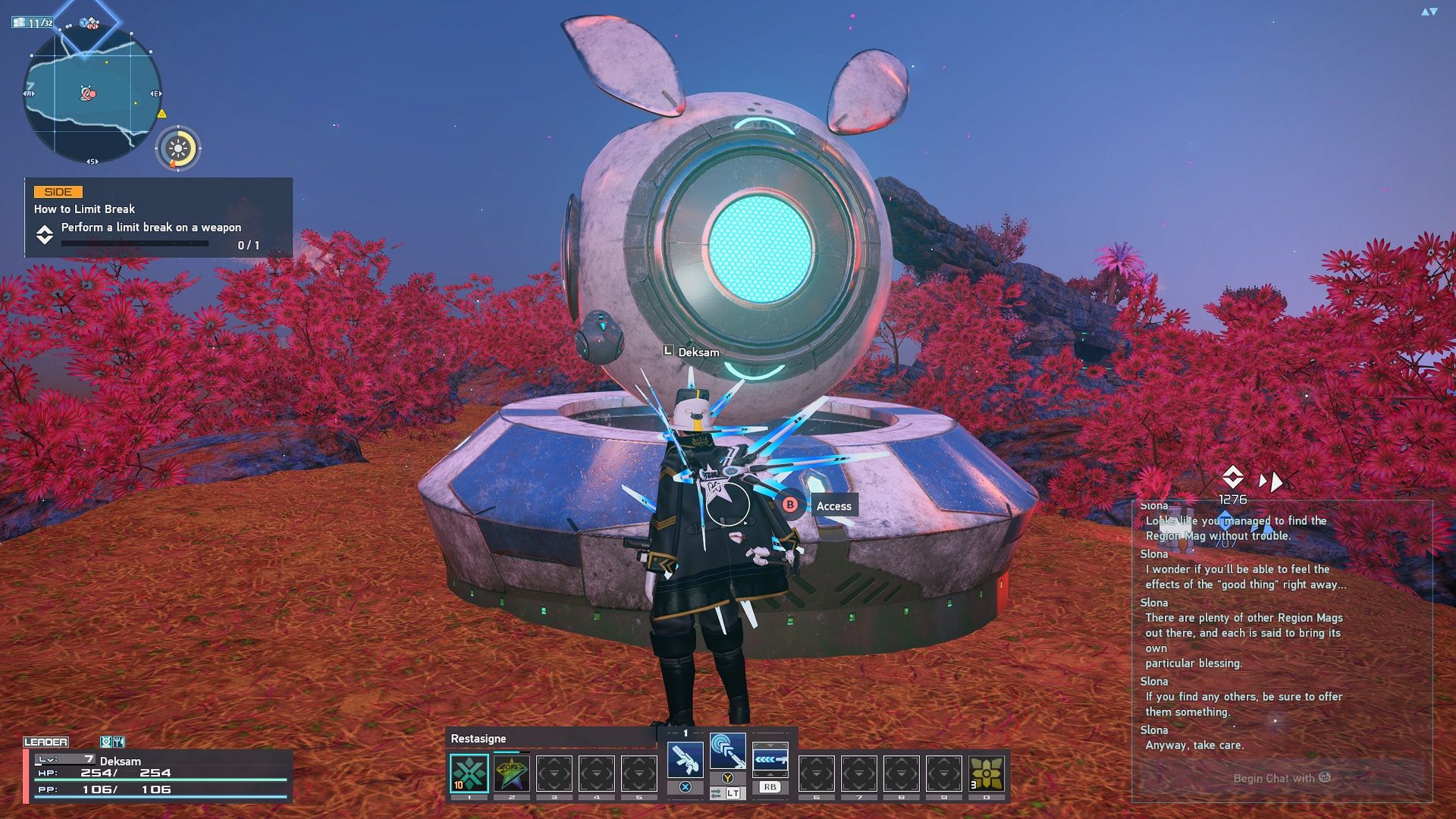 The story in New Genesis, at this time, is extremely short. If it weren’t for the requirement of increasing your Battle Power in between certain story missions, you could run through the entirety of the story in a few casual hours of playing. Side missions are also few and far between. Some missions can take a chunk of time to complete, like killing 10 Veteran enemies, but they are manageable, and after completing them, you may be left wondering, “What next?” I worried during the beta that there wouldn't be enough content to keep players invested, and unless you really love grinding 6 different classes to completion, that seems to be the case.

Due to the nature of having only 20 levels, and few quests to play through, achieving max level can take a little time. Once you do, you still have your sub-class to work on, and Battle Power to increase if you want to be the strongest ARKS Operative you can be. The problem is, leveling can become increasingly monotonous when you are chain-grinding mobs ad-infinitum for heaps of lackluster loot that will generally be used as fodder for the weapon(s) set aside as your main squeeze. 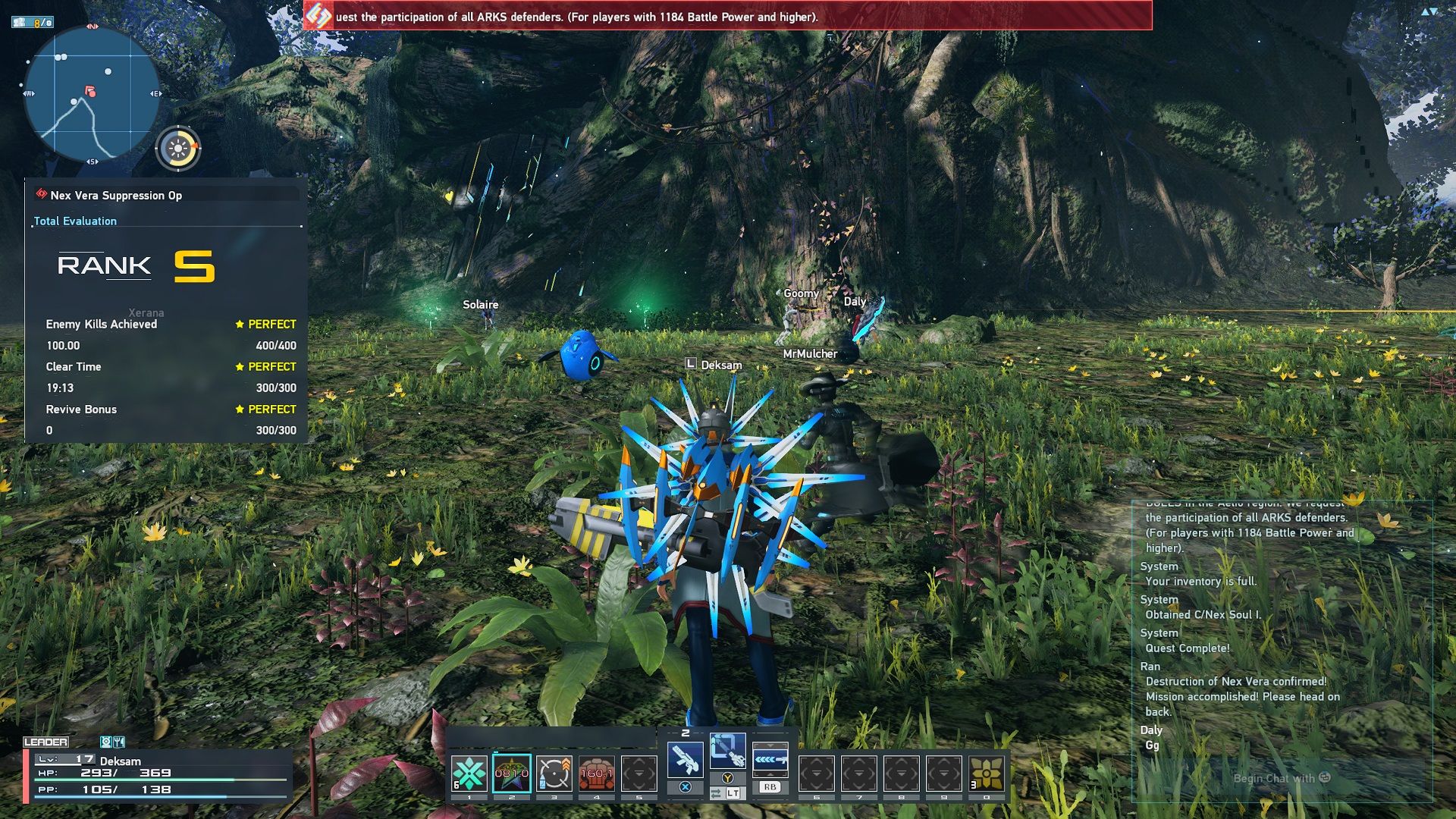 Phantasy Star Online 2: New Genesis is the most impressive game in the series. Opening up the world, streamlining the classes, and introducing features slowly - like augments, upgrading gear, and multi-weapons, will go a long way to ease new players in to PSO2. Fans of the series will surely find a lot to love, but with a short story, limited questing, and a monotonous level grind that doesn’t provide much in the way of variation, I can see many players hopping back to the legacy PSO2 servers, or moving on to something else, until new content updates roll out over the course of the year. New Genesis is full of potential, and I’m PSE-Bursting at the seams to see what they have in store for us. Phantasy Star Online 2: New Genesis is available for free on Xbox One|X|S and PC through Steam, Microsoft Store and Epic Games Store.