From its initial announcement I thought Watch Dogs Legion reeked of risk. The idea of eschewing a central main character and instead allowing the player to recruit literally anyone off the street was a hefty claim, one that I foresaw having no middle ground between compelling and utterly disastrous. Having now played the game to completion, it seems the team at Ubisoft Toronto managed to pull off those lofty claims, as Legion impresses more than it disappoints.

Playing through Legion I truly felt like I was building a resistance against oppressive elites holding London under their thumbs. From the head of Albion Nigel Cass to the leader of the gang Clan Kelley Mary Kelley, I had clear motives, abilities, and opportunities from the minute I took control of my first recruit. It helps that these villains are so well developed, which I’ll get into further down, and that development makes me want to kick these tyrants to the curb. The lack of central main character I thought was a huge risk was countered by the ferocity of the villains I’m fighting.

In order to defeat these oppressors I have to recruit, which is the main course of Legion’s new mechanics. Recruiting for DedSec follows a simple formula: see a person, mark them as a potential recruit, if they like DedSec enough they’ll give me a mission, complete the mission and they’re in. Those missions can feel repetitive: go here, hack this, fight them, rescue the prisoner, you win, but the prize of having a new playable character makes it worth the repetition. Some other recruits come onto the team after completing objectives like liberating sections of the city, but the majority will be run-ins on the street.

I’m not entirely sure what’s more impressive to me: the fact that this feature works nearly flawlessly or that the recruitment process tells the potential recruit’s story very effectively. One man may have a child who’s been picked up by Albion, another may need DedSec to destroy propaganda, etc. I might take a spy with a silenced pistol into a sneaking mission, or I could bring a hacking expert when infiltrating an area with heavy security. If my recruit should be injured, arrested, or killed in Permadeath mode, all I have to do is select another and the mission continues. The freedom and variation of Legion’s recruitment system is an instant highlight, the crowning achievement of the new installment.

It’s not like you can recruit everyone, however. Some NPCs you have to earn the ability to recruit by taking on jack-booted Albion thugs around the city. Freeing an innocent from handcuffs and smacking around the Albion guard responsible might impress some bystanders, increasing their feelings toward DedSec and “unlocking” their recruiting mission. The problem is there’s no way to track each person’s mood outside of viewing their profile, and there are so many NPCs in the world I might not see one of them ever again. If I forget to bring up their profile and save them as a “potential recruit,” I might have lost my chance. It’s an awkward system earning someone’s respect enough to recruit them, but once I’m past that hiccup it’s back to the awesome recruiting system.

Recruiting wouldn’t mean much if the story stunk however, and luckily that is not the case here. Legion’s winding story of corporate abuses and technical espionage kept me going as I played, achieving that rare “one more mission” feeling. I’d attribute my desire to keep going entirely to the bad guys, as the villains of Legion are written exceptionally well. These people are warped, trying to bend the entire world to their will through technology, firepower, and good old-fashioned bullying. 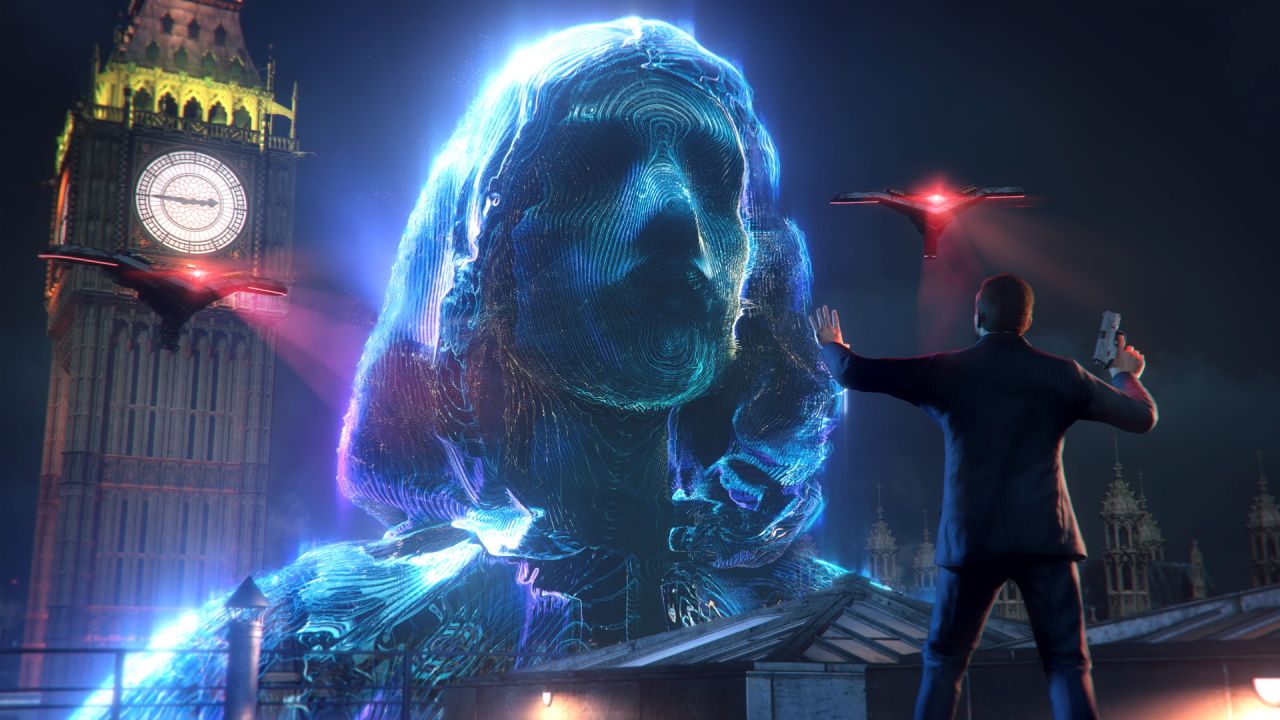 What makes them stand out, though, is the way they’re written. Exploring each story thread highlights many of the defining characteristics of the characters, from their desires to the brutal means in which they try to fulfill them. One mission chain in particular made my jaw drop, the sheer depravity of it all giving me chills. I want to put a stop to their machinations, but I also want to learn more about them -- well, some of them. The interesting villains of Legion are a big reason why the lack of a central main character doesn’t really hurt the overall experience, as they’re so heinous that a group of citizens rising against them makes a ton of sense.

While out in the field trying to save London, the chinks in Legion’s armor began to appear. The combat mechanics are fairly generic, fistfights consisting of three buttons while shooting is just aiming and shooting from behind cover. Recruits having their own abilities helps a bit, like the drone master who can hack an enemy drone and turn it against the bad guys, but at its core it’s very repetitive.

The stealth mechanics are easy enough, but they’re sometimes inconsistent. I could be behind cover hiding from an enemy, but somehow they can still see me and force me to fight. Granted this doesn’t happen every fight, but the further into the game I’d play -- and the more enemies I’d face -- this issue would pop up more often. Taking down a passing enemy by springing out of cover, however, is satisfying every single time.  Driving mechanics aren’t much to write home about, though they are better than the cars of San Francisco in Watch Dogs 2. That’s not saying much, but at least here I can drive and turn without flying into a fence. Also I appreciate the classical music station accessible while driving...something about outrunning Albion in a car blasting “Flight of the Valkyries” just feels right.

The city of London is bustling with life, the graphical style of Watch Dogs Legion really making the different areas pop. It’s not a technical masterpiece, I’ll get into why shortly, but this urban playground certainly impressed me. Still, I couldn’t shake the feeling something about it seemed...familiar. I can’t quite put my finger on it, but it feels like I’ve traveled these streets before. I know it sounds foolish to say “this map of a real-world place feels just like the real world place,” but as of this writing I’ve never physically been to London. I have however played Assassin’s Creed Syndicate, and I’m curious how much of that map was adapted to Legion. These streets and buildings definitely give off some familiar vibes.

As mentioned the game looks good, though as with other Ubisoft titles a few obvious technical issues rear their heads from time to time. I saw citizens phase out of closed building doors, textures pop into place as I ran by buildings, even some occasional self-destruction with light poles falling over without anyone actually touching them. One time a car just slowly accrued damage until it exploded, and not a single NPC even walked by it. I still have no explanation for that, I’m just relieved something random like that didn’t send my recruit to the hospital.

The worst offense, however, was during a pivotal moment at the end of one of the main mission arcs. There aren’t many choices to be made in Legion, but one major moment involves (no spoilers) choosing whether someone lives or dies. I made my choice, the cutscene began to play...and my Xbox One X immediately shut itself off. I turned it back on, only to discover I had to do half the mission again to get back to that scene, which I eventually did in order to proceed. I cannot emphasize how frustrating that was, and if I wasn’t reviewing it I might have given up on the game right then and there. Ultimately I’m glad I stuck with it, but that moment will always color my perception of the entire experience.

Watch Dogs Legion does feature microtransactions as one would expect, and they allow me to purchase in-game currency boosters, cosmetics, specialized recruits, and a collectibles map that shows me the locations of all of the map’s hidden trinkets. Thankfully they’re all tucked away in the tab furthest to the right on the menu screen, and I never once encountered an intrusive ad telling me to purchase them. In fact, in my first draft of this review, I completely forgot to even mention them. Needless to say, if you don’t like microtransactions, you have nothing to worry about here.

Watch Dogs: Legion made some hefty promises leading up to launch, and I’m happy to report it follows through on the big ones. Recruiting anyone off the street always impresses, even if the missions can be redundant. I loved the story being told, some moments truly make me gasp in surprise or even horror. Despite the occasional glitches found around the city -- and that one system crash --  I really enjoyed being part of Legion’s version of DedSec. I don’t know where the series can possibly go from here, but I’ll be watching for it.

Copy of game provided by Ubisoft PR for the purposes of this review.