Rome: Total War was a game I played extensively when I got my own gaming PC when I was 17. Total War had always been one of the major reasons I was a PC gamer, with Shogun still being one of my favorite games of all time, though there has always been something alluring about the downfall of the Roman Republic that has drawn me to Rome: Total War over the years.

So it's fitting that, while I'm re-listening to Dan Carlin's Hardcore History podcast, Death Throes of the Republic, watching HBO's Rome and digesting the words of Caesar himself in his autobiographical The Civil War, Total War: Rome Remastered gets released. This remastered version of one of Total War's best installments brings the original gameplay back, with some interesting quality of life improvements to the UI, though it does show, in stark detail really, how much the series has evolved since 2004.

At its core, Total War: Rome Remastered is a faithful remaster of the original Rome: Total War. The visuals have been improved with higher quality textures across the board, the UI has seen a makeover to make it a bit more clean than its 2004 predecessor, and agents got some much needed love by Feral, the team behind the work. However, the gameplay that made Rome so addicting is still there on display, acting as a time capsule back into Total War's past.

One of the major features that will take some getting used to if you've only played the more recent Total War installments is the need to physically send diplomats to your enemies and allies in order to, well, engage in diplomacy. No longer can you just open the diplomacy screen, click a name and start trading, now you have to put in the literal legwork to, well, make your terms work.

This, admittedly, took some getting used to as I forgot I even had diplomats to use. I had gotten so used to the new way Total War handles diplomacy, though as my play through campaigns went on, I found myself yearning for this style of gameplay once again.

Moving your diplomats, armies and other agents is a treat as you get to explore more of Rome's beautifully remastered campaign map. This was the first total war to have a full 3D, detailed map like this - Medieval: Total War and Shogun: Total War before it were simply handdrawn maps on paper, acting like the campaign board in a general's tent. However, Rome: Total War added the realism I always wanted out of the series. That map has been beautifully remastered with more detail, with the snowy winter areas looking particularly good, such as Gaul or Germania.

Water has a beautiful shade of blue, looking almost painterly at times. The roads, mountains, forests - all highlights making the hours I spent staring at this map less of a chore than the old paper maps of the early games. Army models seemingly got an upgrade too, with each campaign sprite looking more detailed than I remember. If you want a more realistic look to your campaign map as well, you can simply toggle it in the graphics settings (though it's a shame you can't change resolution or window-type unless you're in the main menu).

Gameplay has seen some improvements now as well, with a fully-rotateable camera on the campaign map. Tactical views of both the campaign map and in-battle maps are also available and much appreciated. Agents also have their own panel, allowing you to easily send an assassin or spy on campaign, or use the newly added unit, Merchants.

Merchants themselves in Total War: Rome Remastered feel right out of Medieval 2: Total War. These merchants will seek to monopolize resources on maps such as gold, olive oil,  and more. You can also use them to buy out rival merchants, locking up a resource they might be converting into gold for their faction into yours. This took a fair bit of getting used to, as I watched my lands overrun with merchants from other civilizations, but once I got the hang of the mechanic I found myself sending them all over my budding empire. It's also nice that Merchants have an automanage toggle, meaning you can set them loose and forget about them, knowing the AI will do what it can to monopolize sending money to your treasury.

Where Total War makes a lot of its bones is not simply the campaign map, but the in-game RTS-style battles. Utilizing large groups of troops, you're able to take the role of battlefield commander and clash with your enemies, whether it be a pitched battle on an open plain in the Roman heartland of Italy, or the deserts around Carthage. It's here, though, where even a Remastered Rome starts to show its age. Units are more detailed than their original counterparts, as well as the environments around them, but they still look decidedly aged. The movement animations of units don't look nearly as fluid as their modern-day Total War counterparts, even if they are improved over the original animations. I found also that the AI, especially pathing AI in cities during seiges, left a lot to be desired. 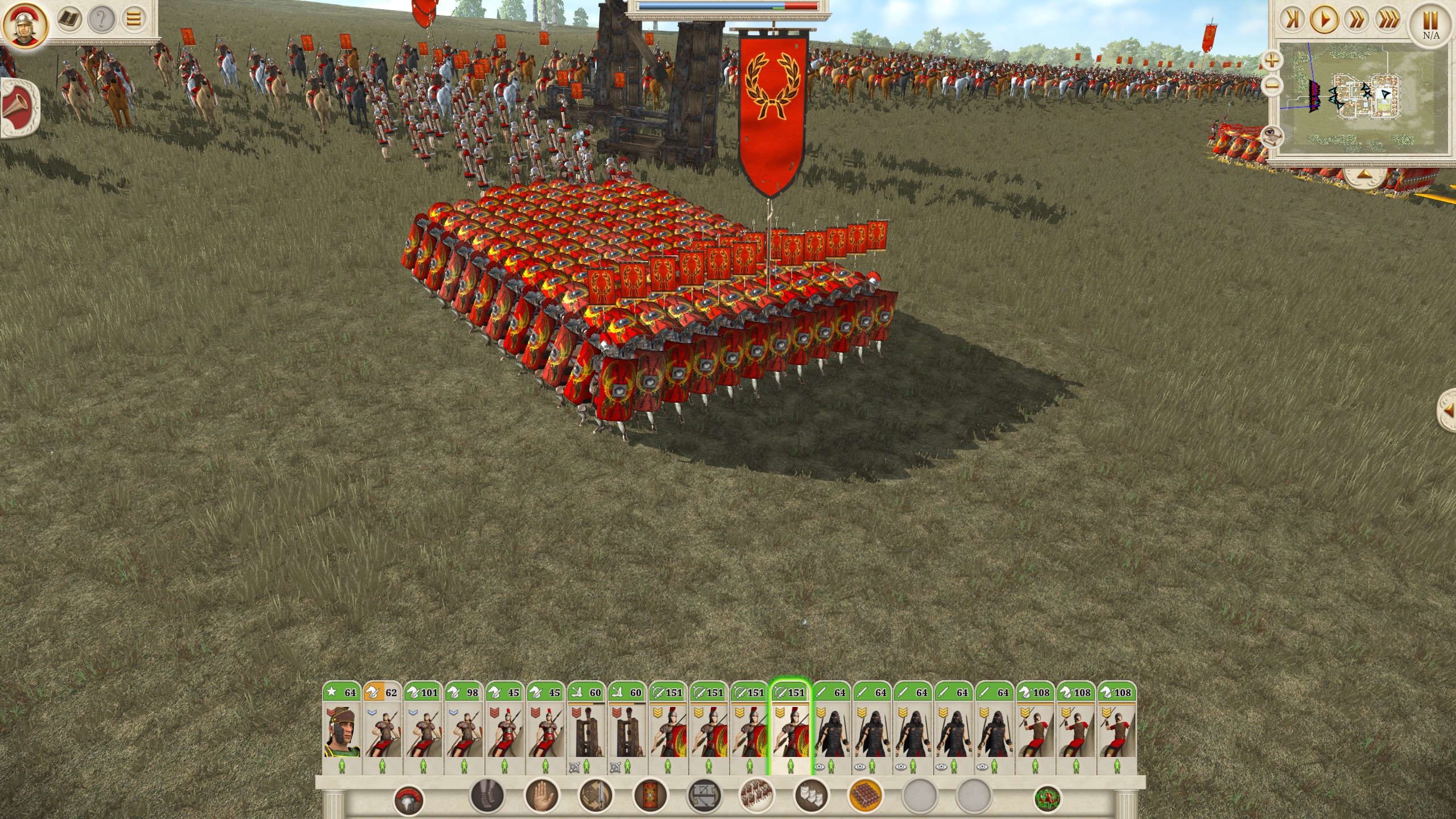 However, the core of what made these battles feel so epic back in 2004 is still here in 2021. The sheer size and scope of the battles you can have, coupled with the need to still plan out maneuvers, flanking, positioning and more kept me on my toes throughout each fight. Taking a group of heavy Roman cavalry and smashing into the flank of a Gaullic horde will never get old. Seeing the elephants on the horizon when fighting the Carthiginians always provides a moment where I feel like the Rohirrim seeing Oliphaunts for the first time (which, if you're into cheat codes, type that into the console commands next time you play).

The sounds of battle (and the rest of Rome Remastered for that matter) add to the illusion of being part of this ancient battle. Steel against steel, the thundering of hooves, the roar of horns above the din add to the atmosphere. And don't even get me started on Jeff Van Dyck's excellent soundtrack (seriously, Contemplation is in the top 5 all time Total War songs).

Total War: Rome Remastered is a fantastic recreation of a fantastic old game. If you were a fan of the original, you'll really enjoy the remaster, even though it definitely shows its age in many ways. The remastered version allows you to play with every faction unlocked, meaning you don't need to conquer the world as a Roman first, you can take up arms as the Scythians and usher in the age of the horse nomads hundreds of years before their time, or turn the Ptolmaic Eqyptians into the most feared power in the Mediterranean. Rome: Total War's two expansions, Barbarian Invasion and Alexander are also part of the package, with each getting the remastered treatment along with the original.

All in all, if you're a Total War fan, especially someone who loved Rome: Total War back in the day, Total War: Rome Remastered is a fantastic way to jump back into the older game with some modern improvements. You'll have to get past some of the more archaic bits of the design, but the core experience: conquering the world and ushering your faction through Rome's civil war period is still so satisfying.