Resident Evil Village is a fun reminder of what Resident Evil used to be. It copies a lot of what made Resident Evil 4 so special, while maintaining the new first-person perspective. In a way, Village takes a step back from the extreme horror of Resident Evil 7 and realigns the series closer to what 4, 5, and 6 did before it. Fighting off Lycans, exploring Castle Dimitrescu, and interacting with new characters like Duke captivated me in a way that I haven’t felt in a Resident Evil for a long time. Although Village’s story doesn’t hit in the same way, it still serves its purpose in offering enough questions to keep you going in search of answers.

Village, also known as Resident Evil 8, is publisher Capcom’s latest entry in the survival-horror series since Resident Evil 7 (RE7) launched over four years ago in 2017. Village continues the story of protagonist Ethan Winters, the new character introduced in RE7, set several years after he survives the Baker house. Now, Ethan is trying to save his daughter from the clutches of a mysterious Mother Miranda in a hidden village somewhere in Eastern Europe.

ENTER THE VILLAGE OF DOOM

Village continues the first-person view from RE7, which still feels weird to me. I prefer the third-person perspective that was still used in both of the remakes for Resident Evil 2 and Resident Evil 3 that launched more recently. That said, I think Capcom has done a better job this time around utilizing the first-person perspective for jump scares or surprises. Village likes to set up instances where an enemy comes up behind you when your attention is drawn to something ahead. I was constantly spamming the quick-turn while exploring to check my backside. 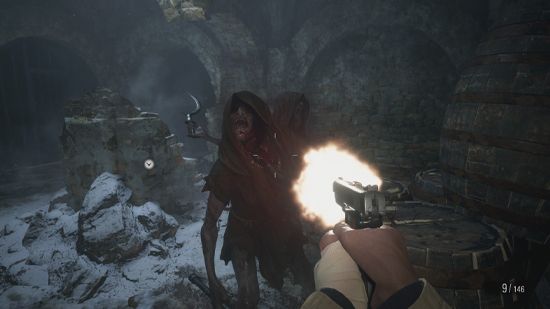 This gets exacerbated with the phenomenal sound design - there is a constant stream of creaks, shrieks, taps, or groans coming from all over that made me think that an enemy was right around the corner. There were times that I was scared of my own footsteps and had to stop moving just to be sure, “Were those my steps, or something else’s?” One of the prime examples of this is when Lady Dimitrescu herself starts chasing you around her castle. Despite her large stature, she is incredibly sneaky and I would need to stop and listen for any approaching footsteps.

Playing on PC, Capcom does a fantastic job in the graphics settings for fine-tuning how everything looks and feels. There is a miniature picture to the side of any graphic change that shows an example of how Village will look with the option selected. There’s even a handy bar that shows VRAM memory usage. If you have an AMD graphics card, there’s also support for both AMD FidelityFX CACAO for optimized ambient occlusion as well as AMD FidelityFX SPD for texture mapping and post-processing effects. Even on my RTX 2080, Village looks amazing and with Ray-Tracing turned on the lighting effects are some of the best I’ve seen implemented. The RE Engine really shows off its power in Village. 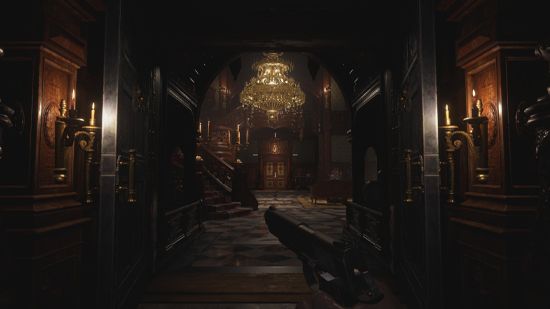 A big problem I have with the first-person perspective is that we still don’t get to see Ethan’s face. Unlike Clair, Chris, and Leon from previous entries, this makes Ethan feel less personable and more like a blank slate of a character. Ethan never truly feels alive as a character, and to make matters worse his dialogue in Village always seems hollow. It’s a downgrade from his performance in RE7, and lines are either uninteresting, over-the-top, or just downright out of place. This issue is highlighted by stellar performances from side-characters, like the new merchant Duke, Lady Dimitrescu and her daughters, and even Chris Redfield that makes a cameo.

GETTING DOWN AND DIRTY

Unlike RE7, Village wastes no time in getting to the fights. It felt like it took hours in RE7 to encounter the main mob enemy type, the Molded. In Village, you encounter the new Lycan enemies - villagers that have mutated into beastly monsters - within the first 20 minutes or so. One of my favorite setpieces was towards the very beginning, when you are just starting to fight the Lycans, and Village throws a massive horde of enemies at you. This reminded me a lot of a similar situation in Resident Evil 4 to fight off a swarm of villagers. 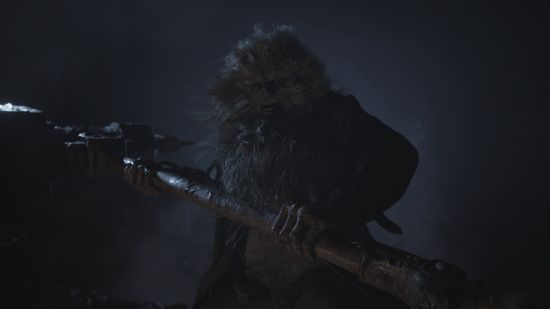 This beginning fight was extremely difficult, as I was still learning how the Lycans moved and attacked. There are several houses around this area to try and survive in, which can provide valuable ammo or healing herbs to help you last longer. Surviving this horde by running around, ducking into the small houses, getting trapped, and fighting my way out was exhilarating. It didn’t feel like the slow-paced RE7 at all, and was much more akin to the setpieces of earlier Resident Evil titles. It felt like the Resident Evil that I knew and loved.

Village strikes a better balance between the action-packed sequences of RE 4, 5, and 6 with the horror of RE7. There are still plenty of scares to be had, but without me feeling quite so powerless. Admittedly, Village might have removed too much of the horror element for the genre. I was only truly terrified once to where I had to pause and step away for a moment. Without spoiling it, the next Lord’s area after Castle Dimitrescu was the most heart-pumping and terrifying experience in all of Village and reminded me a lot of a SAW movie. Thankfully, it was a relatively short experience, but one that I am not keen on replaying anytime soon.

Village trades off between frenetic action sequences against the many varieties of monsters and calmer periods of exploration and puzzle solving. I used these periods of calm to stock up on my ammo or pay a visit to the merchant Duke to sell valuables and purchase upgrades for my guns. Ammo can usually be found in abundance and, with the newly added crafting system, you can always craft more ammo using materials that you find scattered around. Unfortunately, there’s no storage system in Village and any overabundance of ammo or supplies can’t be saved. This also means that you can’t save older guns if you find an improvement - you can only sell them off to Duke.

The Duke, or just Duke, is probably my favorite new character in Resident Evil Village and I wish I could learn more about him and his history. Duke is your go-to for weapons, consumables, and even upgrading your guns. He also can cook up dishes that will increase your overall health or other benefits, like reducing the damage taken while blocking, by bringing him ingredients. Unfortunately, his history just never gets explored in detail even though he clearly knows more about the going-ons in the Village than he lets on. He remains a mysterious figure all throughout, with virtually no explanation given for his ability to be in so many dangerous places - like setting up shop in Castle Dimistrcu or in the Lycan-infested Village. 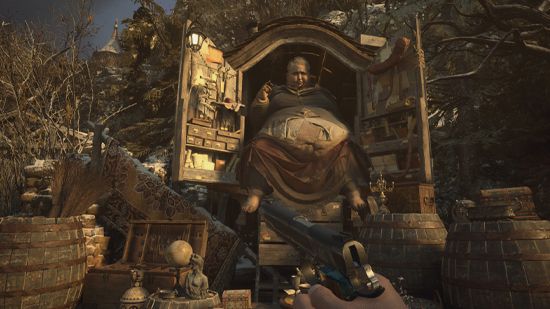 True to Resident Evil fashion, there are a myriad of puzzles ranging from finding keys to unlock doors to discovering a lock combination. More elaborate puzzles may require traversing back to older areas using items that you’ve found further into the story. The puzzles are plentiful, but there’s not much innovative or new here to the series. Find a key or a crest, unlock a door, find another funky item, use it to unlock something else - rinse and repeat for pretty much every area. There were only a couple of times that I got stumped before having that “A-ha!” moment, but generally most puzzles in Village are as easy as moving forward until you find something that allows you to go back and unlock a previously inaccessible area.

The map function in Village is invaluable for larger areas, such as the Village itself or the castle. Rooms are still color-coded on the map for whether there are still items available, which helps to make sure you don’t miss out on any valuables. Sometimes, the valuables are gems or crystals that can be shot down from the ceiling or walls - which I would never find if it wasn’t for the map telling me there was still loot to be found. Locked doors and unsolved puzzles are also saved on the map, so you always know what kind of key you’ll need to find or what the current objective is. 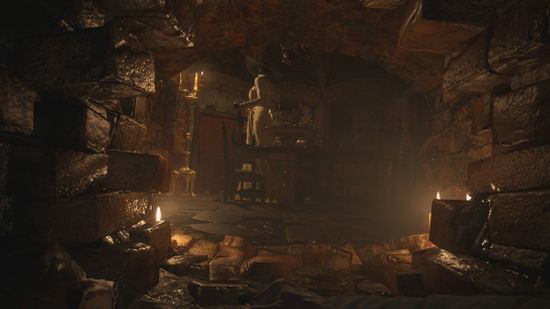 Although the pacing of the story felt more in line with prior entries, I did feel like the middle half of the story was rushed through. I spent hours exploring Lady Dimitrescu’s castle before finally escaping. Unfortunately, both the second and third locations weren’t nearly as elaborate. I completed each one in about 30 minutes, which felt like there was an opportunity to expand on these. From start to finish, I beat my first playthrough in just over 9 hours. This included me taking my time to explore every nook and cranny on the map until every room or house showed as complete - as well as tracking down animals to hunt and treasures that showed on the map.

Although this doesn’t seem very long, my time spent in Village felt dense in terms of content. I really enjoyed my time poking around the village, discovering tucked-away treasures, and finding notes to learn more about the lore of the Village itself and the four Lords themselves. After beating the story the first time through, you unlock bonuses that can be purchased with points to enhance further playthroughs - such as new weapons, or even turning on infinite ammo. I’ve already progressed through my second playthrough on the hardest difficulty mode so that I can earn more points and unlock even more. 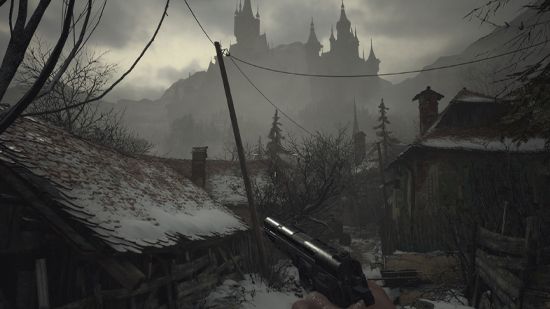 This bonus section is also where you can unlock the Mercenaries mode after completing the story. This is an arcade-like mode where you defeat enemies that spawn in waves and try to rack up points by doing so as fast as possible. It adds a little something extra for when you want a break from the story. Personally, I’m not a fan of this mode much although I am incentivized to play it for an exclusive weapon that can be earned only by getting a high score on each level.

Resident Evil Village has become one of my favorite Resident Evil entries to date, but only because it borrows so much from prior entries in the series. Honestly, the story does little to further the overarching lore of Resident Evil and I am a little confused as to what Capcom has in store for the next entry. That said, Village feels like a realignment to what Resident Evil will be more of in the future, and for that I am extremely excited. With rumors of a Resident Evil 4 remake in the works, Village sets an example for what we can expect going forward.

By itself, Resident Evil Village is a fantastic addition to the survival-horror genre and focuses more on empowering the player rather than cheap horror elements. As part of the series, Village lacks in the story department and seems like it tries to cast too wide of a net to appeal to a greater audience rather than catering to the hardcore fans. Diehard ResE fans might be disappointed at the lack of lore in Village, but casual fans won’t feel like they need to have played every prior entry in order to have a good time. Ultimately, I’d recommend Resident Evil Village to anyone that loved Resident Evil 4 or who felt like Resident Evil 7 was too horror-focused.

Note: A copy of Resident Evil Village on PC was provided by Capcom for review purposes.