Hyrule Warriors: Age of Calamity leaves me conflicted. On the one hand it’s one of the most efficient uses of the Musou formula I’ve ever played, with crisp gameplay, unique and interesting characters, and loads of enemies to toss around. The Divine Beast segments, fleeting as they are, give me a rush of power few other games can achieve. My inner tumult lies, unfortunately, in the area I was most excited for the game: its story. Age of Calamity is not a bad game, in fact I enjoyed the majority of the ride very much, I just wish it had stuck the landing a bit better.

My initial hopes going into my run through Hyrule Warriors: Age of Calamity were simple: give me a Zelda story that I hadn’t been told before. I knew what to expect from the gameplay -- while I enjoy Musou games they aren’t exactly re-inventing the wheel with each new release -- but the story is where I wanted to be wowed. This was a prequel to a game where the Hylian apocalypse had come and gone, I’d already sunk nearly 100 hours into the aftermath. What caused the Calamity? Would I see the hero lose in a canonical story sense for the first time in the entire series? That fueled my excitement, the promise of a rich new take on a Zelda storyline making me very intrigued.

Yes, you do find out what happened to Hyrule...but in a few places the story doesn’t live up to its end of the bargain. I don’t hate the story per se, I did find most of it to be a fascinating look at a piece of Zelda lore at an entirely new angle, but I also don’t feel like my mind has been blown. A few elements of the overall story lacked some of the emotional oomph that I’d hoped for, and after watching the credits roll I found myself slightly disappointed. 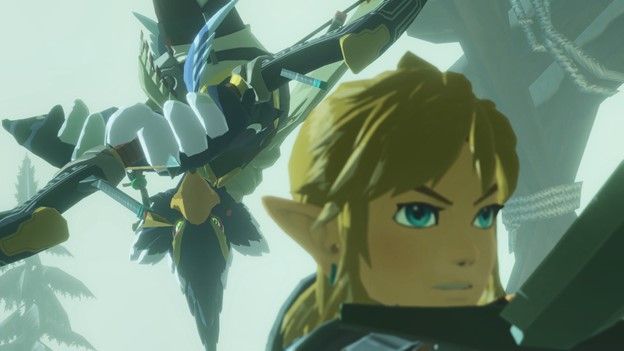 I think the main cause of that disappointment lies in how the game’s progression works: there are only seven chapters in the main story, yet the map is filled to the brim with icons. Some are simply there for me to click on when I bring the right amount of resources I find along the way, others are quick training missions designed to focus combat on certain elements like long spears for Link or combat with one of the four rune abilities. None of those extra icons add to the lore of this game or the previous game, which is saddening because there are so many to complete during a playthrough. Imagine how loaded the Breath of the Wild map began to look after a while; Age of Calamity’s looks the same way only now those nooks and crannies are just incremental upgrades instead of lore dumps.

That disappointment I felt with the story turned itself around quickly however, as I remembered how dang fun it is to plow through the waves of bad guys Age of Calamity throws at me. Dozens of enemies line the path I’m walking, waiting for their turn to try and stop me, and I happily hack and slash them into oblivion. The scenes I’m fighting in are cut straight from Breath of the Wild, to the point where I’m actively remembering the arena and what I did there during the original game. It’s a familiar setting, one I’m happy to revisit either here or in BoTW, and it retains everything that the first game presented.

Button-mashing is a key part of the action, this is a Musou after all, but the other options I have for attacking go a long way to reduce the redundancy. The Sheikah Slate allows me to use the aforementioned Rune Abilities Cryonsis, Magnesis, Remote Bombs, and Stasis in the heat of battle simply by pressing R and a designated button, sometimes even telling me which one I should use to counter enemy attacks. Of the four the Remote Bombs are essential, as each Champion uses them with top efficiency, but the others only help in certain situations. I also like the gear system, where weapons are found or picked up after a battle and either equipped to the corresponding character or fused with like weapons to create a more powerful version of it.  I do like how they tried to make this Musou game stand out with attacks like the Rune Abilities, but other than those it’s not really all that different. 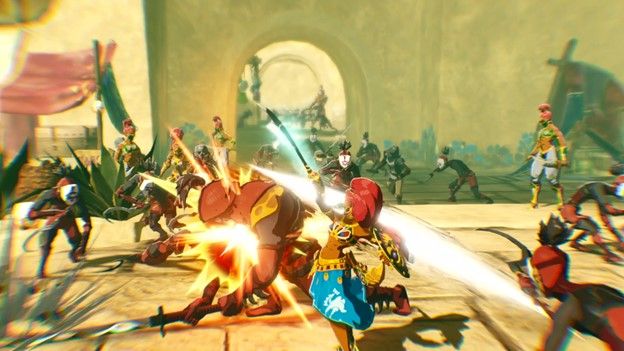 That brings up the key to all of this: at its heart it is still a Musou game, and the mindless hacking and slashing can get annoying after a while. My tolerance for Musou is high, so I don’t mind mowing down countless enemies and feeling like a powerhouse doing so. However, even I have to step back sometimes and think “this is enough button pressing for one night.)

If The Legend of Zelda: Breath of the Wild is the calm, reserved child, then Hyrule Warriors: Age of Calamity is its loud, rowdy older sibling. The action starts at 10 and never lets up, giving me battle after battle of tight and fun Musou action. The story beats are for the most part great, but a few of them definitely left me wanting for more and not in a good way. Age of Calamity delivers on the action-heavy goods, just don’t come in here expecting the story to blow anyone’s minds...and that’s the real Calamity.