Imagine a future where game developers make house calls, no different than when you call a plumber to your home to check the pipes. These devs assess, diagnose, and fix problems with gaming chairs where people lay back, throw on a virtual reality headset, and transport to an entirely new plane of existence. This is the basic premise of Gamedec, a futuristic mystery novel infused with RPG elements that eschews combat for fact-gathering and puzzle solving. Mixing the world aesthetic of The Ascent with the story-driven gameplay of Disco Elysium, Gamedec uses some novel concepts to weave an intriguing tale of murder and mystery...until it unfortunately fumbles at the 1-yard-line.

The core gameplay loop of Gamedec is simple: receive a job, enter a game world, investigate inside said game world, solve the mystery. I travel to the dark urban alleyways of the hedonistic Twisted and Perverted, the farmlands of Harvest Time, and the sky fortresses of Knight's Code. Each of these worlds is fully realized, complete with their own HUDs to add to the whole "entering a virtual world" experience, though I only get to work in a small portion of each one. Harvest Time even lets me start my own farm and harvest pumpkins, lambasting the concept of free-to-play games in the process. It's a neat little piece of satire that got a few laughs out of me.

Gameplay consists of talking to people, gathering clues, and using those clues to progress the mystery until you get to the conclusion. Exploration is also key, as searching every nook and cranny to gather the clues needed to proceed is paramount. The problem with the exploration aspect is that the game doesn't indicate where clues are very well, leading to a situation where I am stuck in an area for hours needing one interaction in order to proceed, but not having any idea where in the haystack the needle rests. In the same vein, the game also doesn't convey when all of the clues in an area have been found, so the only way to progress may be to make a choice in the deduction menu, even without all of the clues filled in, but I have no way of knowing. 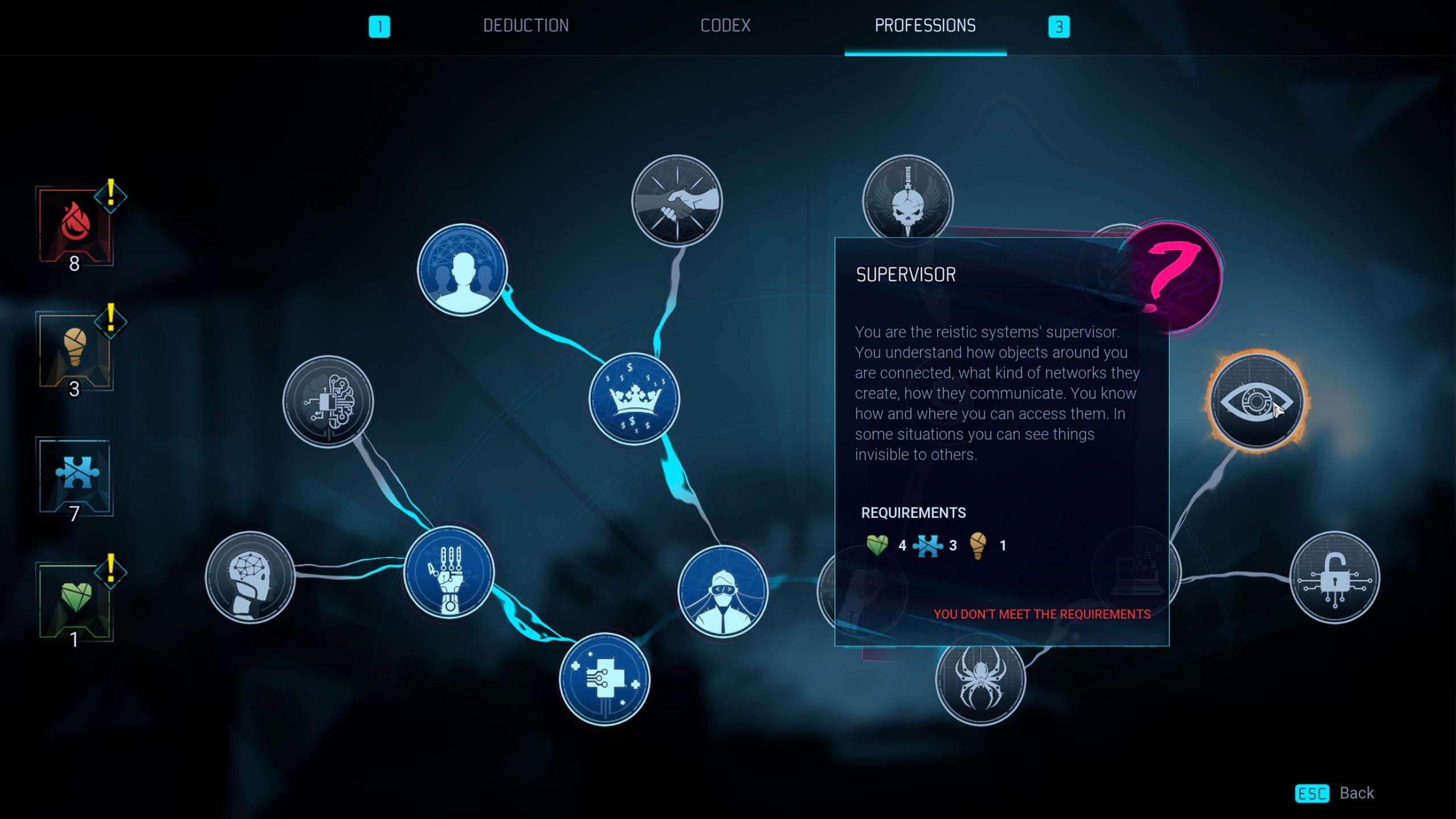 I can unlock specific dialogue options though, through the game's skill tree RPG element. There are four different attribute points I can unlock through conversation, which then can be turned around to unlock nodes on the skill tree. Much like the clues however, I'm not entirely clear on how to earn certain points other than "see a symbol as you talk to people." I'm trying to get to a certain node on the tree, but one of the four attributes eludes me and I haven't the foggiest idea how to find it. It's a deterrent to pursuing a full upgrade tree, honestly, and it frustrates me that earning these points isn't more straightforward.

Despite those frustrations each of these mysteries are a ton of fun to figure out. The worlds created in Gamedec are interesting, the people in them are written with snappy and fun dialogue, and the stories themselves are pretty cool. A few characters reoccur from world to world, and seeing how they change their personas in each world made me chuckle. I found myself legitimately interested in solving these mysteries, and in turn solving the overarching storyline encompassing all of this.

However, suddenly the game takes an extreme left turn, moving away from focusing on mysteries and problem solving and instead dropping me into a labyrinthine maze. No longer do I have to gather clues or explore a world, I now have to follow certain color-coded paths in order to find the next plot points. In the storyline this change works and makes for an interesting twist, but in practice the maze is such a slog that I find no joy in it. I'd invested time and energy into the digital worlds presented to me before--not to mention the world outside of the headsets--so why am I being taken away from them in the back half of the game? The mysteries were the best part of the game, and by the time you realize you won't be getting any more of them it's too late. 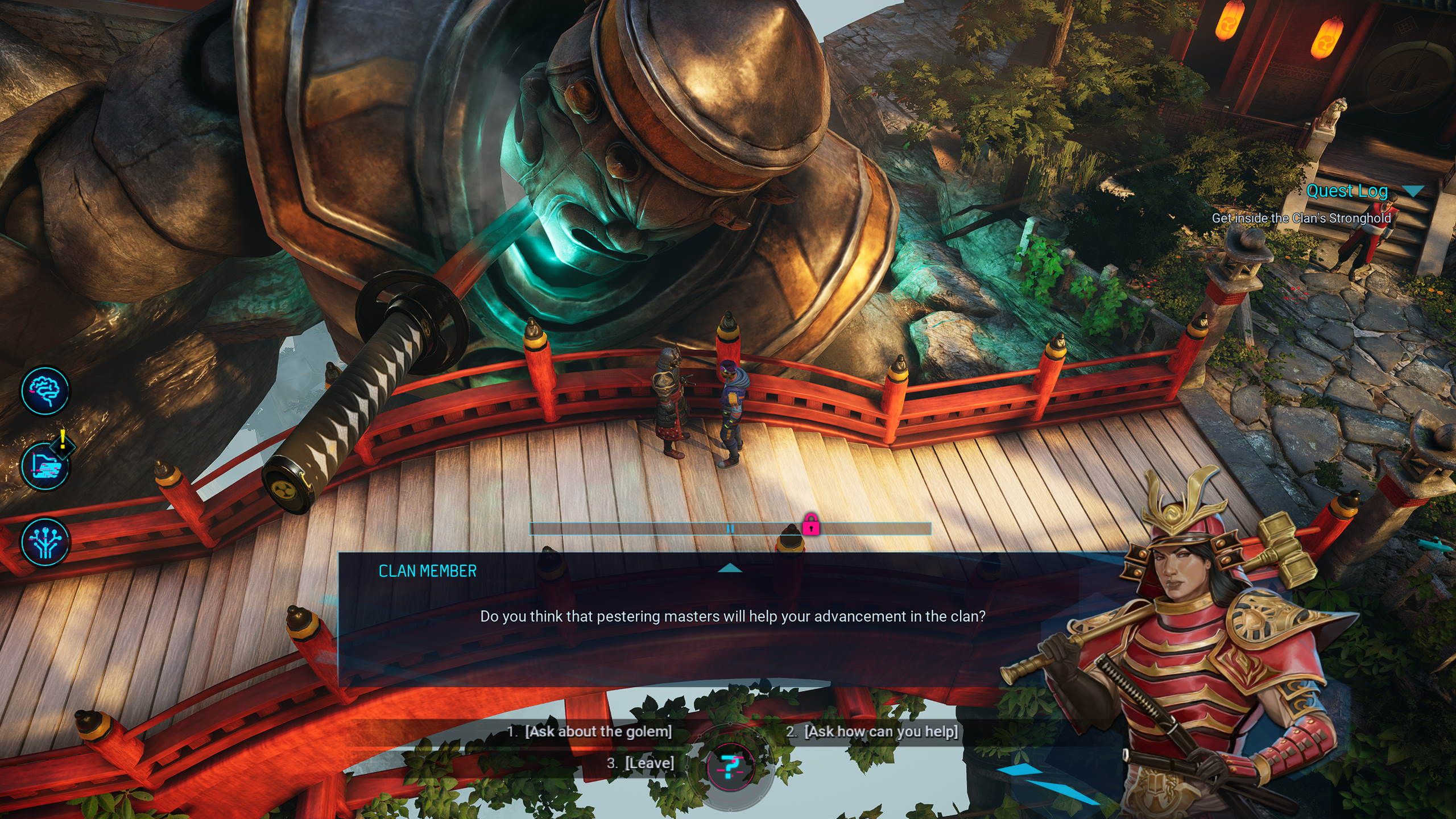 By the end of my nine-hour playthrough of Gamedec, the main feeling swirling around my head was one of conflict. I was very high on the first few chapters of the game, venturing into the digital worlds and piecing together these grand mysteries, but as the credits rolled all I could think of was that major tonal swerve at the halfway point. If the game stuck to the investigation part of the game, introducing more worlds and building to an exciting climax that way, I'd be raving about the game. Now though I wonder if anyone else will see the game through because of how annoying that maze section can be. I would have liked to jump back into Gamedec and play again--mostly because the game tells you what you found and didn't find after the credits and I saw a lot of "you did not" in my report--but that damn labyrinth gives me pause.

I want to fully endorse Gamedec, and up to a certain point I do, but I would be remiss if I didn't mention the radical shift in the game's focus. Up until then the investigations are mysterious and fun, telling a legitimately interesting tale. After it the game feels like it goes into hyperdrive, not stopping until the credits roll. If this universe is ever revisited, I would hope there would be more investigative stories and less weird color-coded mazes. As it stands then, Gamedec is best described as a promising title with uneven execution.