Being a guerrilla is exhausting work. As I blast my way through another military outpost, dropping enemy soldiers left and right, I find myself tired. Not so much physically tired, but emotionally--as if I've gone through these motions before. Don't get me wrong Far Cry 6 has plenty of things going for it, from a beautiful setting to a great cast of characters, but this is a Ubisoft game through and through, a large map stuffed to the brim with objectives to complete included. This is not a bad game, however Far Cry 6 doesn't do enough to separate it from other games of its ilk.

Far Cry 6 puts me in control of Dani Lopez, a resistance fighter trying to liberate the country of Yara from its brutal dictator Anton Castillo. Under Castillo's rule Yara has discovered a highly effective cancer treatment called Vivaro, produced by spraying tobacco plants with a potent poison gas. Castillo's not sticking his own neck out there to spray the poison, so he "encourages" the locals to do it for him...or suffer the consequences. The emotional whiplash of hearing "cure for cancer" and "poison gas" in the same sentence never really goes away, but this is a franchise that has banked on silliness in the past, this is simply par for the course.

Giancarlo Esposito is the perfect choice to play a ruthless and authoritative character like Castillo, his cold delivery and biting words coming through in every scene. In fact I wish I could see more of him, as his omnipresence is felt less in direct contact and more in the abundance of posters or billboards adorning his face and loudspeakers broadcasting his speeches to anyone within earshot. His powerful performance underscores his underutilization, particularly in the early parts of the game. Far Cry has built its reputation on charismatic killers, so why isn't this one on-screen more often?

Esposito leads a stellar cast of characters, each one bringing something different to the table. The rough-and-tumble Juan is my favorite, his gruff sarcasm equaled only by his proficiency with modding. Clara Garcia, the leader of the resistance group I'm working with, is a calculating and strong leader, a watchful gaze coupled with an authoritative voice. Every character in the game is a delight, giving me plenty of witty banter to enjoy as I'm plotting my next move.

I don't want to forget to mention Yara herself, the island paradise that serves the backdrop for all of my explosive shenanigans. Yara is beautiful chaos, the kind of tropical island you'd want to vacation on if not for the overzealous military and cantankerous wildlife. Walking down a dirt road can sometimes lead to a fellow guerrilla fending off a gator or enemy soldiers running away from an angry mongoose. Gunfights will break out as soon as two warring factions see each other. Still, in the rare quiet moments looking out over a cliff and seeing the magnificent looking valley or ocean below can take your breath away.

You might have noticed by now that I've gone a long way in this review without mentioning combat, and you're correct; that's because combat isn't much to write home about. Gunplay is standard aim down the barrel and shoot stuff. I gain multiple types of weapons--pistols, shotguns, rifles, flamethrowers, etc--but it's all still more of the same shooter gameplay I've been used to for a long time.

That's not to say combat is all mundane, it just gets monotonous in stretches. Luckily there are a few elements that will keep the edge on. The first is the crafting system, which allows me to upgrade weapons I find with silencers, improved sights, etc. Finding supplies out in the world will let me improve my wares when I find a workbench, many of which are spread across the island. Creating a behemoth and carrying it into battle does make you feel like a badass, though that feeling went away sooner than I'd hoped. 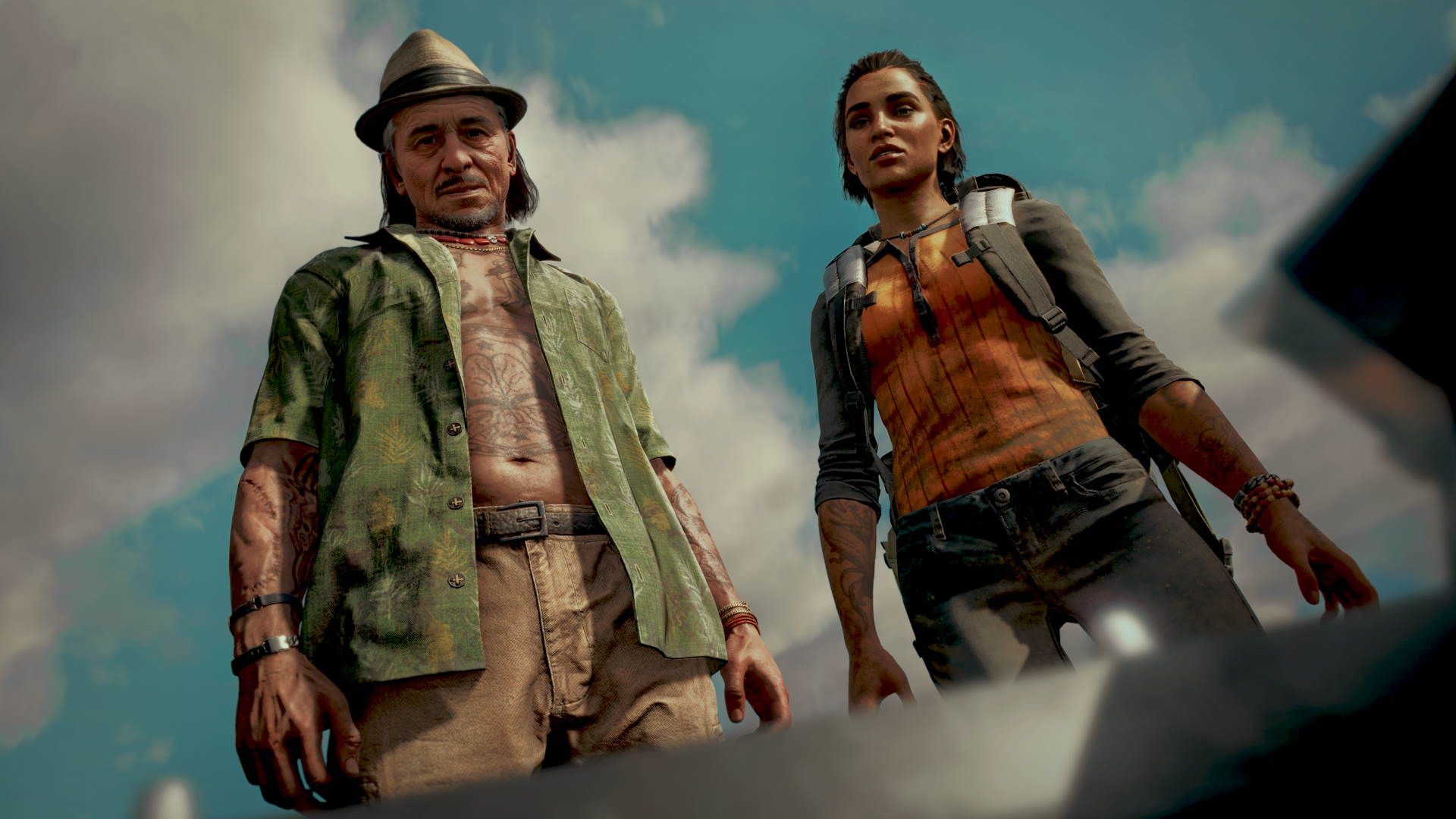 The second is the most important part of Far Cry 6 and the reason I kept going for as long as I did: the animal helpers. Directing a massive alligator named Guapo to devour a helpless enemy is awesome, especially the kind of silliness I expect to see in my Far Cry. There are other animals I will encounter in my question, including a rambunctious chicken, but there's one helper that rules them all: Chorizo.

Chorizo is a dachshund in a wheelchair, hardly the seasoned warrior I'd expect from a Far Cry 6 companion. He has the ability to distract enemies and allow me to get the jump on them. Other than that there's nothing really special about him other than his being a super cute dog, but that belies the real strategy behind this dog. When I bring him to battle, and I see an enemy soldier shaking Chorizo off of a pant leg or, worse, kicking this poor dog, I turn into a raving, bloodthirsty maniac. All of the animals are fun to bring to a job, but Chorizo's innocent and adorable nature makes me a better soldier simply because I don't want anyone to touch him.

That said, even these perks are fleeting. Before long I'm shooting at hordes of soldiers again, trying to complete objectives and move on to the next area. It also doesn't help that the AI in both enemy and ally isn't fully up to par. In one area a friend I was supposed to be following forgot what path she was supposed to take, rendering her frozen in place and making me unable to pass the mission. I died, of course, and the second time the alleyway worked, but that AI slip-up could have been catastrophic if I hadn't saved in a while.

Far Cry 6 has some explosive action, but in my 25-or-so hours of gameplay the stretches between the most explosive missions bring the experience down. Yara is huge and full of things to explore, but exploration should not mean "walk 1000 in-game meters to get an objective that sends me 2000 meters in the opposite direction. Every character is expertly portrayed--not the least of which is Giancarlo Esposito, whose Anton Castillo ranks right near the top of best Far Cry villains. The world and the people in it are interesting, interesting enough to overcome the monotony, but getting there can certainly be difficult. Far Cry 6 doesn't move the needle at all, but it still holds its own amongst the other shooter games available.