There are a lot of things to fear in Dying Light 2 Stay Human: zombies, bandits, bigger zombies, psychopaths, giant zombies with steel girders where their arms should be, and nighttime when all of these crazies come out to play. However, the scariest thing about Dying Light 2, the thing that had me sweating more than anything else in the game, was the constant fear that a random technical glitch would force me to quit the game and reload my last checkpoint. Without these tech problems DL2 sets a lofty bar in a loaded month…but with them, the game is knocked down a few undead pegs.

Dying Light 2 Stay Human puts you in the shoes of Aiden, a nomadic man who travels from settlement to settlement in this post-zombie apocalyptic world. He's known as a Pilgrim, taking jobs and earning cash while in the city he visits. He comes to the sprawling metropolis of the game--simply called "The City" for those unaware--in order to find his sister Mia, who was separated from him when they were kids. Oh, and he's also infected with the virus, and prolonged time in the dark will cause him to turn.

The City was once an urban paradise, with boutique shops and restaurants lining the maze-like streets. Those businesses have all been long since abandoned, peppered with the occasional undead inside that protect whatever secrets or treasures they hold. During the day the streets are "safe" and survivors can travel around them virtually at will, with the real dangers stuffed inside the aforementioned shops. At night, however, the dynamic flips, and zombies emerge from every corner thirsty for blood while the shops are empty.

Let's start with the best part of what the game offers: freedom. Once the prologue ends and you enter The City in earnest, you are immediately set free to do whatever you want. Granted it's not total freedom--story missions will always play out in order and half the city is inaccessible for a third of the game--but within that smaller section I am free to my own devices. I can explore, engage in random encounters, fight zombies, head into a dark building to look for supplies, whatever I want. The abandoned storefronts I imagined are here. That's cool, and the freedom feels even better when you make your way into the other half of the map. 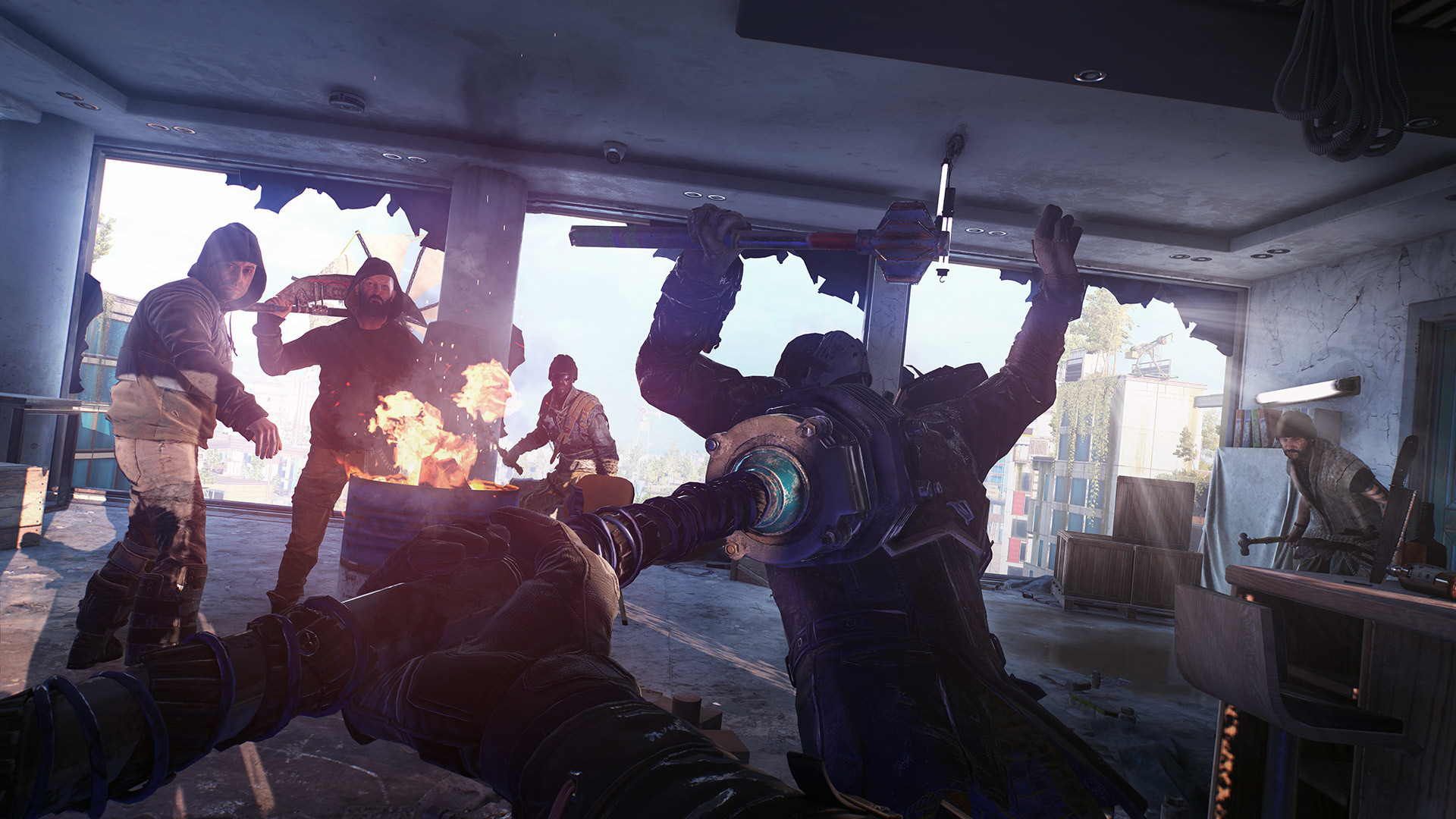 It's also cool that the two main elements of Dying Light 2's core gameplay are a ton of fun to play - for the most part. For starters, the combat here is perfect. Smacking an enemy in the head with a table leg or a water pipe doubling as a mace feels great with every swing. Watching myself slowly wear down an enemy, highlighted by little changes such as masks breaking or limbs coming off, is awesome.

Modding a weapon to enhance its power, like giving it a flame mod to set enemies on fire, makes sense and takes very little time to learn. Combat is so good, in fact, that I'll admit I'd gone out of my way a few times to take out a few undead with my favorite weapon; partly because I want to test out a sick mod, partly because I just want to smash a zombie around some more.

The second tenant of the core gameplay is parkour, and here is where we start to see a few chinks in the armor. When it's working, and Aiden is hopping across rooftops or using cars to avoid zombies, it absolutely sings. At times I would get major Assassin's Creed vibes, traversing massive buildings with relative ease and a flow that was awe-inspiring. Unfortunately, parkour is not as consistently good as combat, and one false move can be disastrous…even when that move wasn't false.

Every once in a while, I would jump to a platform only for the game to not register, causing me to fall. This isn't a big deal when I'm standing directly below the platform I want to jump to, it's far more frustrating at the end of a high climb and the missed platform causes me to die and start over again. Factoring in the sometimes brutal checkpoint system, and you can find yourself losing 15-20 minutes of progress because the game decided you didn't make the jump when it's clear you did.

There's one other factor when talking about parkour: the tools the game gives you for traversal. First is the paraglider, which despite a frustrating control scheme overcame the odds and left me impressed. Soaring through the sky and getting a bird's eye view of the city got a lot of oohs and ahhs out of me, the sights being very pleasing despite being a game centered around the undead.

The grappling hook, meanwhile, is a neat little tool that gives me added swinging power whenever I need it. As long as I can attach myself to an object I can swing off of it, but again the same issues as parkour rear their ugly heads. I cannot tell you how many times I fell dozens of stories to my death because the targeting reticle just didn't appear. I can fully acknowledge when I'm the one screwing up, but when it's not me I just get mad and sometimes that's the case with DL2's parkour. Let me put it this way: in my playthrough I died about twenty times total in over 30 hours, I can think of two deaths that were because of combat. The rest were caused by falls due to wonky parkour 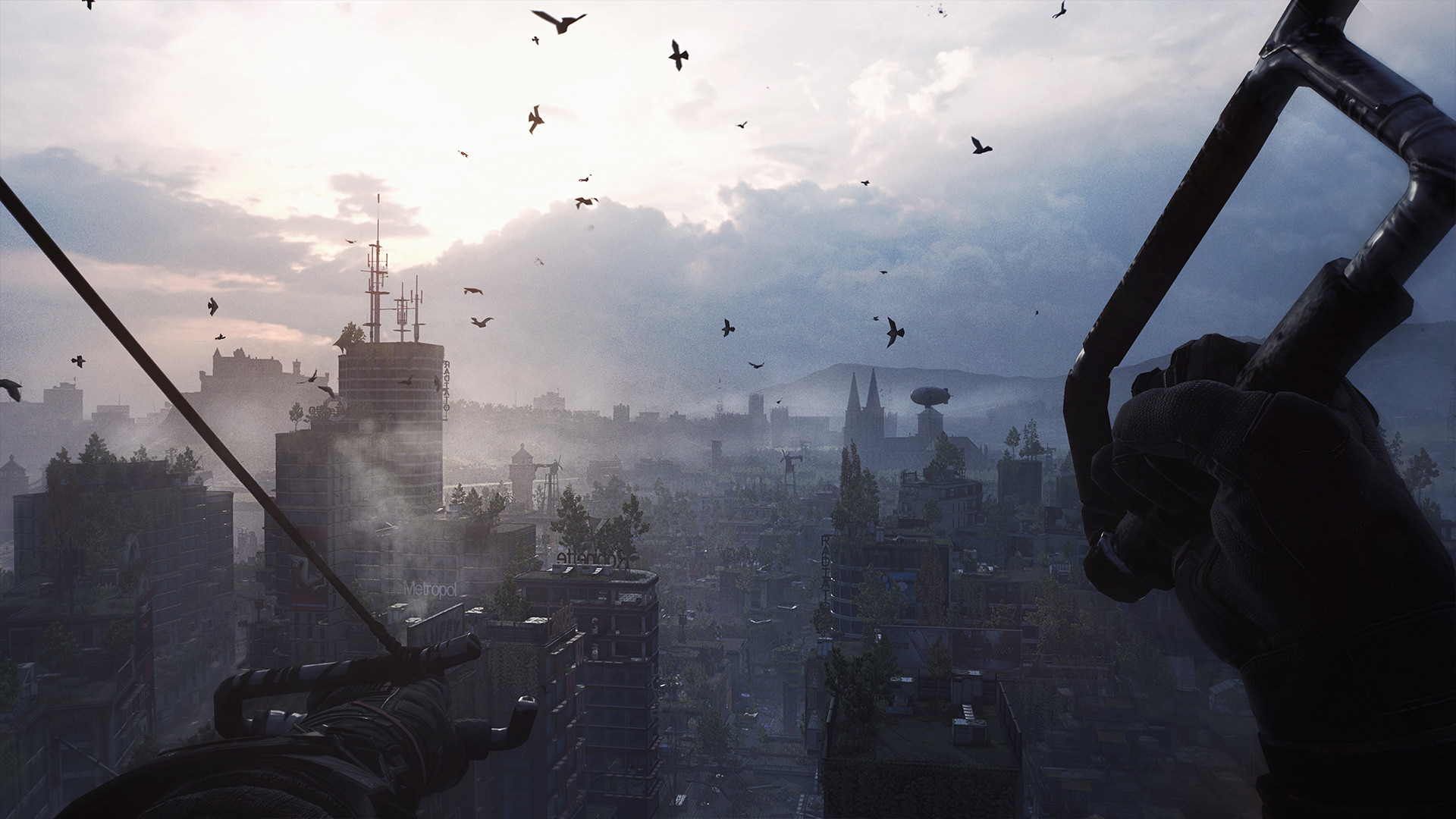 That is actually a perfect segway to the game's achilles heel, the one thing that will sink Dying Light 2 for a lot of people if not addressed: there are a lot of technical issues here. Some of them are innocent--like when I use my character's survivor sense to look for enemies, and the enemy I do find's silhouette has his head spinning in circles. Others are much worse--like the final boss of the game somehow falling through the platform of our battle, getting stuck inside the object and forcing me to quit out and open my save file once more.

For a game that we first started hearing about in 2018, there's a surprising lack of polish. Zombies will be on the ground next to a car, take one step, and then suddenly they're on top of the car. The audio will randomly cut out, replaced with loud and obnoxious buzzing noises that force another restart. They're small issues that, in isolation, wouldn't be a problem, but compounded together they come very, very annoying.

I played the game on the Xbox Series X, and it looked and sounded great for the most part. From fighting zombies to using parkour, what the game wants to be good at it can be good at for the most part. The problem comes when a myriad of small technical problems build and build to the point where I think I'm in the middle of one when a door won't open, only for there to be a solution tucked away.

Let's get one thing straight: I do enjoy playing Dying Light 2 Stay Human. The story is great and warrants additional playthroughs thanks to multiple endings, the combat feels awesome, and there's a ton of stuff to do in this sprawling city (500 hours worth, apparently). It just needs to clean up the technical issues and stop spawning the final boss inside the platform he's standing on, among other things. If that happens, the impact--much like the game itself--will be night and day.