I weaved around the burning embers on the ground, fired off a couple quick shots with my bow, took control of the catapult, and fired. I’d like to say I did some serious damage to the castle we were storming, but it turns out hurling two of your teammates through the air doesn’t do any damage to the castle walls. I guess that’s what those boulders were for…

Chivalry 2 is a game about chaos. From 64-player assaults on castles, to all-out brawls on a jousting course, each game mode features a variety of different objectives. In general, your goal in Chivalry 2 is to overpower the other team to capture objectives, kill enemy leaders, and even burn supplies. But if you just want to focus on swinging your polehammer around, decimating as many enemies as possible, you can do that too.

Chivalry 2 prioritizes fun over anything else. Sure, it’s a pretty game, and sure, the maps are unique and varied. But what keeps me coming back for more is the sheer amount of entertainment value this game provides. Ragdoll physics, engaging yet tough-to-master combat, and the joy that comes from discovering ways to interact with the environment make this game a blast.

Torn Banner really nails the moment-to-moment combat. As a kid, I always wondered what a real medieval battle might have been like. After spending hours watching heads get cut off, limbs get torn apart, and the occasional accidental killing of a teammate with a wayward arrow, I think I have a pretty good idea now of what it may have been like. Swords clash, arrows zip, and catapults cause devastating explosions.

Melee combat is ferocious, and patience is rewarded. The blocking mechanic is so smart, and it’s so easy to learn, that over time I found myself skillfully blocking attacks from several attackers all at once. And while Chivalry 2 is a game that is defined by the chaos of the battlefield, a skilled move like a well-timed block can mean the difference between getting killed or surviving a group onslaught. 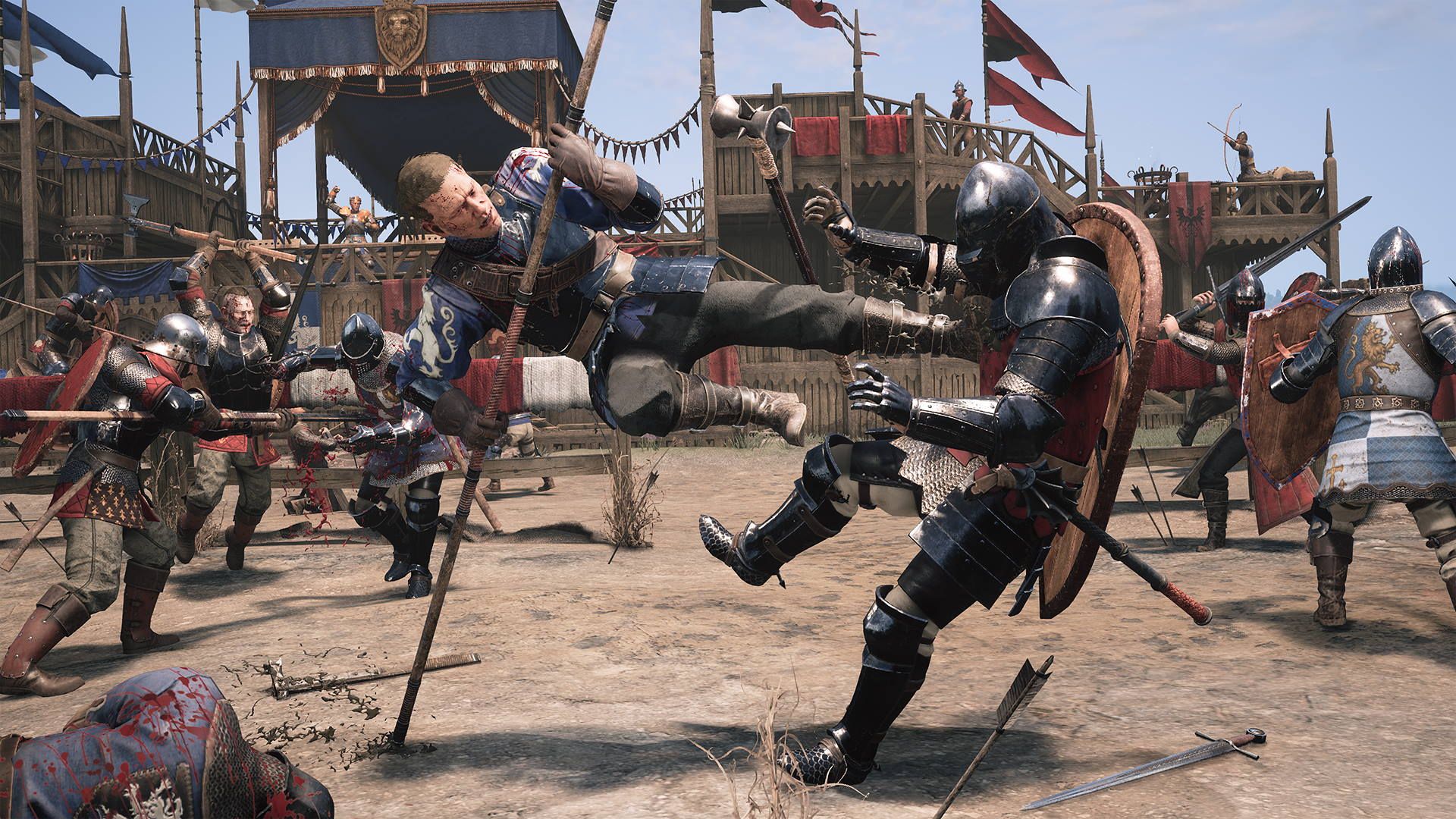 Don’t get me wrong, this game is not easy. I’m pretty sure I’ve spent more time respawning than fighting. But charging back out onto the battlefield and getting back into the action is so intense, I almost didn’t mind dying and getting a short break. But it can be frustrating to die over and over again (I have to admit to a couple rage quits). And sometimes it seems like I just can’t do anything right. I can recall a specific instance where I completely forgot that I was on the blue team, and proceeded to kill three allies in a row without even realizing it. I’ve come across unexpected enemy tactics that threw me for such a loop that I let my guard down and got destroyed. But I just had to remember that the difficulty is all skill-based. I alone am responsible for my fate in Chivalry 2, and that’s a powerful feeling. If you can outsmart or outplay your opponent, you can win.

Landing attacks with a variety of weapons - including swords, maces, battleaxes, spears, and so many more - can really be exciting. A perfect block, followed by an overhead chop from a battleaxe, is so satisfying and way more fun than it should be. It’s different than in a game like The Elder Scrolls V: Skyrim. In that game, blocking an attack often only requires that you have your shield or weapon up and are looking at the enemy. But in Chivalry 2, you actually have to aim your blocks. Simply holding your block straight at the opponent won’t always work. You must match the attacker's swing, whether they’re coming at you with an overhead strike or a wide slash.

But don’t forget about those Archers. A good Archer in Chivalry 2 is a deadly enemy. Headshots from across the map come out of nowhere and can ruin a perfectly good melee run. And, speaking as someone who has played a lot of Archer, headshots and bow kills in general really feel good.

While the combat itself is fun, and each of the game modes and maps are exciting, that excitement can fade. Eventually, you’ll stop noticing the beautiful scenery and creative objectives, and will instead only be focused on finding an enemy and beating them over the head. Not that this is a bad thing, but I found myself longing for a new mode or new map, just to spice things up.

The good news is Torn Banner has already outlined some of its post-launch content, including the new “Great Walled City Of Galencourt” map. There is also a new “arrow cam” coming in the first update, which should make those cross-map headshots even more satisfying.

I did, however, find that during the heat of battle it can be frustrating to know exactly what I was supposed to be doing. Sure, it may tell you your objective is to “protect the village,” but what does that mean exactly? As such, it can feel pointless or unclear as to what you’re supposed to be doing, especially as a defender at times, instead of just a good old fashioned melee slog.

Additionally, you will often receive a seemingly random warning that you are leaving the play area. But I got that message even when I was running towards the battle sometimes. Or even when I was in the middle of a fight. I would love for there to be some sort of visual clues as to where I’m allowed to be at any given moment, especially as this system feels pretty arbitrary. 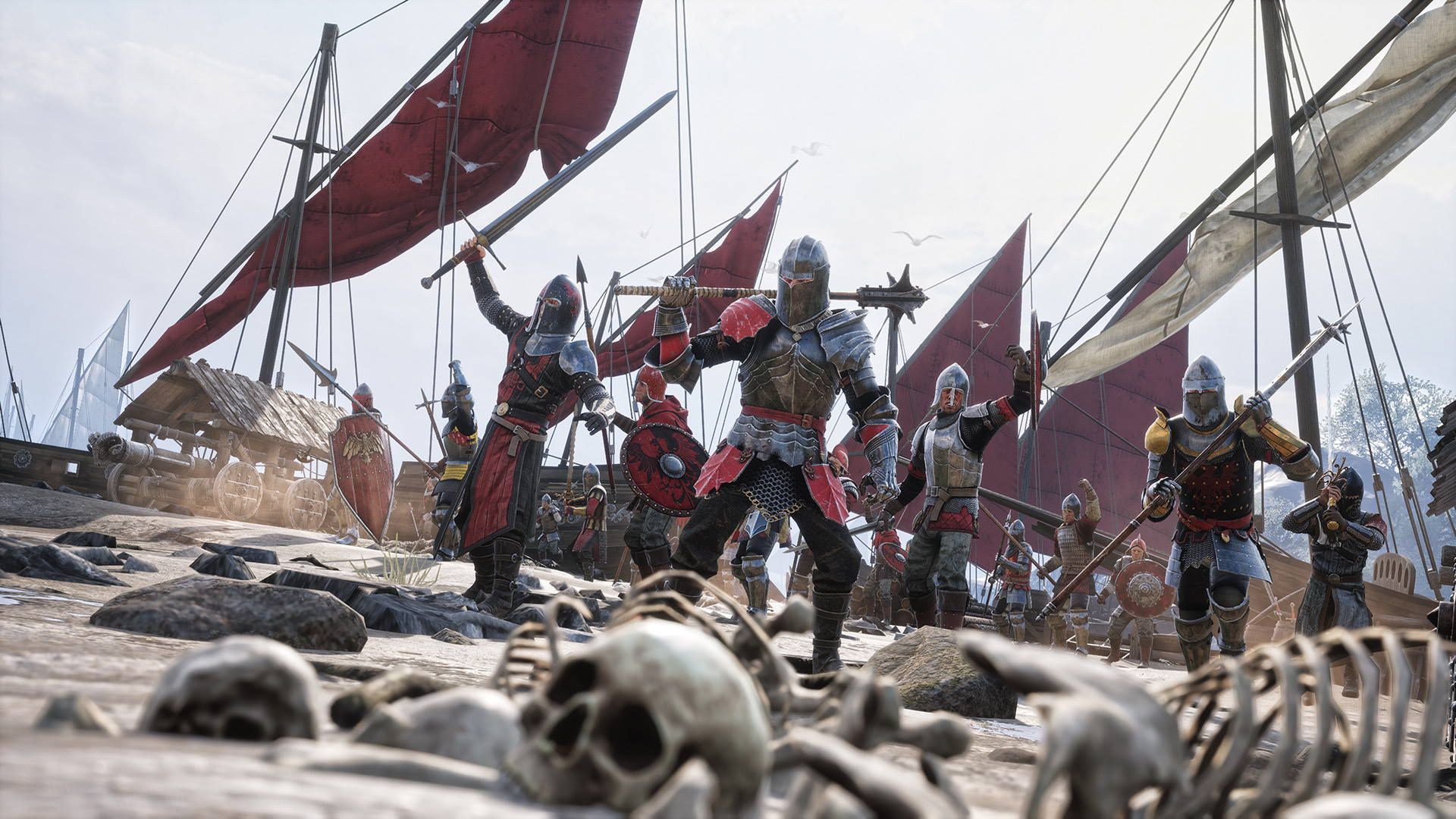 The four classes available at launch are Archer, Vanguard, Footman, and Knight, and each plays differently. The Archer is the most unique, and the only with a ranged primary attack. The Vanguard and Footman wield larger, more deadly weapons (but are also slower to attack). The Knight is a well-rounded fighter, and both a great starter character and viable main.

Progression in Chivalry 2 involves earning gold that you then use to unlock new weapon skins, armor skins, heraldry patterns, and more. The variety of unlocks is fairly substantial (Torn Banner notes there are more than 60 weapon skins available), and are fun rewards for leveling up. There is also a cash shop which allows you to purchase Crowns, giving you another way to unlock items.

I don’t usually care for cash shops because I worry that it impacts progression for those who don’t want to pay money. As far as I was able to tell during my time with the game, there are no purchasable boosts, improved weapons, better armor, or anything of the sort. There’s no real advantage to moving up in rank or unlocking new items other than the ability to equip new skins. Experience points can be earned in a variety of ways, including taking down opponents, killing them, capturing objectives, and more. Win, lose, or savage defeat, you’ll always be earning points toward your next overall and class-specific levels.

Running on an Nvidia RTX 2080 graphics card and an AMD Ryzen 7 5800X processor, I was easily able to average 144 frames per second on max settings. While the scenery in this game is beautiful, and the detail of the gore-filled combat is impressive, the character models themselves leave a little to be desired. They don’t feel like they belong in a 2021 game, with blocky facial features and blurry details. Ultimately though, this is a minor thing for a game like this. After all, if you get the chance to mess up that face with your sword, you’ll be too soaked in blood to see all that well anyway.

On the bright side, there are some interesting graphics options here. You can increase the amount of time that dead bodies remain on the battlefield (I maxed that out). You can adjust how long blood splatters stay in the environment (I maxed that out, too). And you can even adjust your field of view all the way out to 120 (yup, you guessed it - maxed out).

During the beta, it was difficult, if not impossible, to group up with friends. But I’m happy to report that Torn Banner must have been listening, because it worked flawlessly (for me and my friends) during the review period. But some of the menus are a little wonky. For example, the customization menu isn’t very user friendly. I lost count of hope many times I exited the entire menu, rather than just backing up one step. I’ve even accidentally quit the game three times. That may say more about me than about the game, but I just wanted to put it out there.

Ultimately, I’ve had a blast with Chivalry 2. It improves upon every single aspect of the original game, and feels more stable and polished than Chivalry ever did. There is some jankiness to the game (I’m not sure if the aforementioned self-catapulting is actually supposed to be an option), but it doesn’t take away from the fantastic combat. Getting a kill never gets old, battles are unpredictable and memorable, and there are seemingly endless ways to take down your foes.