You’ve probably had the Bugsnax song stuck in your head at least once since the summer: “kinda bug and kinda snack, try to catch it in your trap, feed somebody and you’ll see we are whatever we eat.” That earworm invaded our brains the instant Bugsnax made its debut during the PlayStation 5 reveal presentation back in July. Young Horses (of Octodad fame) painted a surprisingly clear picture of its next game in that trailer, a whimsical and weird romp through a world with edible bugs that look like food.

Bugsnax puts you in the shoes of an unnamed reporter Grumpus -- a Jim Henson puppet-looking race of humanoids -- who crash lands onto Snaktooth Island, the home of the titular Bugsnax, looking for answers. Right away you meet a few fellow Grumpuses, find the settlement of Snaxburg, and get your mission: find out what happened to the missing settlers and bring them home. Once on this Snaktooth island you find the Bugsnax, adorable little creatures made out of food items. Personal favorites of mine are the giant ice cream sundae called Scoopy Banoopi, the curly fry/cheeseburger hybrid Bunger, and the giant crawling sandwich Sandopede.

Bugsnax sits in this strange hybrid genre of Pokemon Snap-style exploration without the rails, core series Pokemon-esque creature collection, and a narrative-driven story game. As you meet new Grumpuses they’ll give you quests, which usually involve catching and feeding them Bugsnax, and eventually they’ll return back to Snaxburg to give you side quests and eat more Bugsnax. While that sounds rudimentary, it’s actually a great system of delivering tasks to the player. I can take them at my leisure, or I can just catch Bugsnax and not help anyone, it’s all up to me. As the game progresses and the island opens up, that freedom seems much more vast. 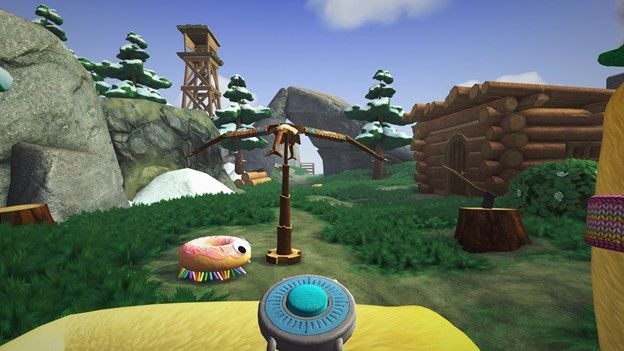 The act of catching Bugsnax ranges from incredibly simple to nigh-impossible based on each Bugsnack I encounter. The traps I have on hand, which include an umbrella-shaped device that closes on command, a hamster ball containing a Bugsnack that I guide with a laser pointer, and a launching pad for flying and hard-to-reack Bugsnax. Some catches require using multiple traps at once, leading to a lot of experimentation while out on the hunt. I like the idea of catching methods not being obvious, problem-solving my way to a catch is certainly rewarding, but sometimes the solutions feel too complicated.

Take the Big Boppsicle, a giant walking double-sticked popsicle that lives in a colder area of the map. He has a cold fog around him, meaning he’ll freeze me if I get too close. Meanwhile there’s a flying s’more with a fire element above his lair named Charmallow who can negate the ice powers. In order to catch the Big Boppsicle, I have to set the launcher up to aim at the Charmallow, lure Boppsicle onto it and launch, and then when he falls to the ground again lure him into the tripwire tool to stun him for the catch within 15 seconds, lest he split into two regularly sized Boppsicles.

Seems like a lot, right? Keeping all of these traps and steps in line in my thoughts was exhausting, and this is only one Bugsnack. There are 100 found throughout the game, and while some of them are as easy as “find Bugsnack, throw trap, activate trap, you win!” others looks like Boppsicle here. Worse still there’s no tell on which is coming next, so I never actually know what sort of trap trickery I’ll have to perform when encountering a new Bugsnack. I understand that this is a new frontier and the processing of learning about the Bugsnax is the point, but a gradual learning process with some consistent flow would have been nice. 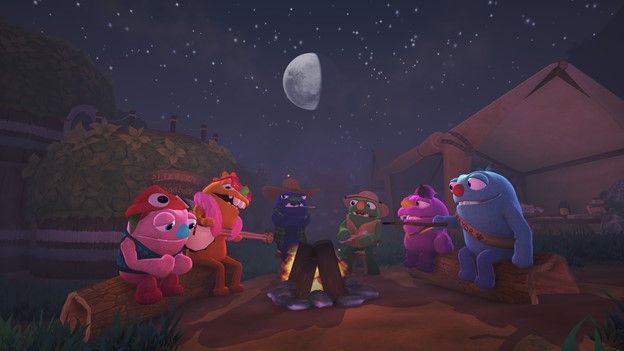 The highlight of Bugsnax, for me, lies in its excellent characters and story. The story lets me explore each of my fellow Grumpuses in great detail, learning more about them through the missions they give me and the interview mechanic once they’re back in Snaxburg. The personalities of these characters shine brightly throughout the game, from the ethically ambiguous researcher Floofty to Wambus the simple farmer. They have relationships with one another, ranging from true love to angry tension. Their voices are loud and clear and unique, injected with personality by a magnificent voice cast. Despite their Sesame Street appearance these Grumpuses are surprisingly human, and I grew to really care about them as I learned more about them.

The overarching mystery that covers all of this, the story behind the Bugsnax themselves, kept me wanting to find out more. Each new area has little secrets and clues hidden throughout, which then leads to the next mystery and makes sure I keep exploring every inch of each biome. I will say this: despite its cheery outward demeanor, Bugsnax can get pretty dark at times...I’m not talking about Don’t Hug Me I’m Scared levels of dark, but I’d recommend playing it through first before allowing young children to check it out.

Bugsnax’s weird and wild adventure is a delight, introducing me to a new society and really letting me learn what makes these characters tick. Catching Bugsnax is fun and rewarding, albeit frustrating at times as well, and with 100 species available there’s plenty to find. Inconsistent difficulty levels and too heavy of a focus on experimentation soured me a bit, but those areas can’t ruin a game that succeeds everywhere else. Give this a shot and I bet you’ll be talkin’ ‘bout Bugsnax for months to come.