Airborne Kingdom is a gorgeous sky city builder brought to life by a small studio of developers over at The Wandering Band LLC. These fantastic creators aren’t new to the industry. With a team consisting of developers that have worked on AAA games such as Dead Space, Dragon Age, Battlefield, and Star Wars, you know that you’re probably in for a treat from the moment you step out into the clouds.

It’s in our nature to reach for the sky; always dreaming, soaring, looking forward to the bright future. Once upon a time, this world knew a glorious unity, ignited by the flame of a single community that came together to create something truly magnificent. That creation was the fabled airborne kingdom (roll credits) that gathered all of the twelve kingdoms into one alliance. However, it wasn’t meant to last. The kingdom disappeared, its wondrous technology lost to time and the wasteland dunes, until one day, you come across a set of ancient ruins with the knowledge that will allow you and your people to return to the skies once more. 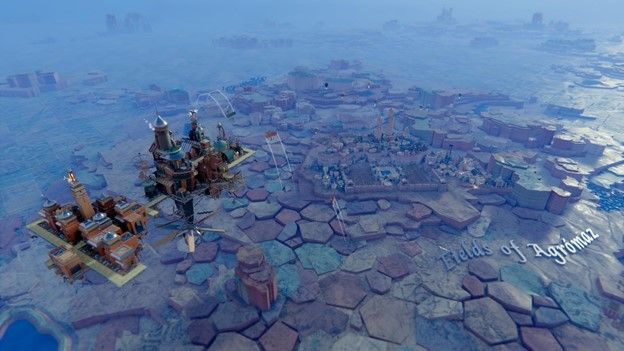 Your name is never explicitly stated, nor truly needed, as the focus of Airborne Kingdom is based on how well you execute your job. Names, titles, and relationships don’t matter here-only hard work and fulfilled promises will see your floating kingdom through to tomorrow. At first, you start out small, with a moderate following of inhabitants that, like you, believe in the Prophecy and the potential to regain the former glory of the past kingdom. It won’t be easy, nothing ever is. Running a floating city takes both resources and manpower. Luckily for us, the world is filled with slowly replenishing resources that can be bartered with at the next kingdom over if you’re running low. That giant patch of forest may be on the other kingdom’s land, but you can absolutely take advantage of it in a pinch. What’s to stop you? You’re an ancient, floating, technological marvel. 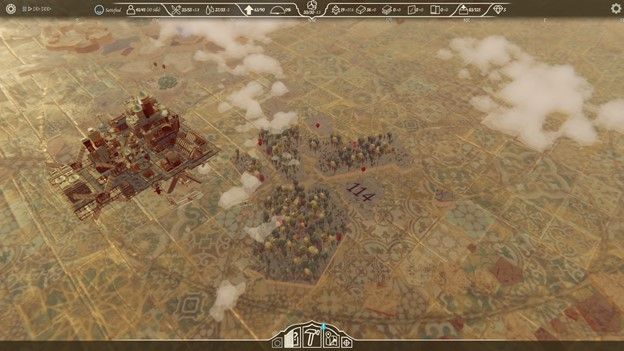 As you slowly drift across the sky, and I do mean slowly, you can come across villages and kingdoms that offer more curious hands to your cause. Once you gain more followers, you’ll start to notice that you have very little control over what they are individually capable of. If you have ten inhabitants, and you place down two buildings that require five people to work at each, you no longer have any free hands to gather resources. They have already been delegated to that task, and until you completely remove that structure, those particular inhabitants will continue to work there. Essentially, you’re playing a numbers game with the inhabitants of the village. If you don’t have any free workers to gather resources, you’ll need to scout out nearby villages in hopes of finding some lost souls that are willing to join the community. 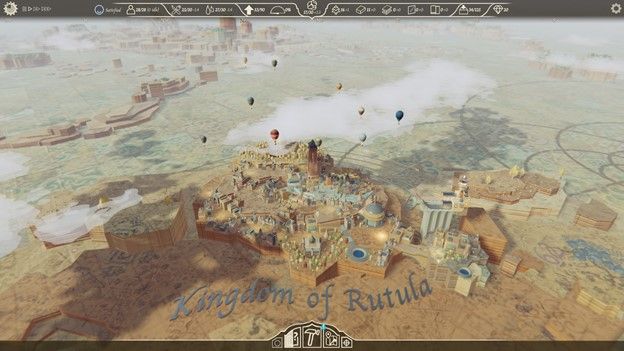 Unbeknownst to those poor, curious settlers, you probably don’t even have enough room to house them yet. If you don’t have homes for your inhabitants, the overall satisfaction of the kingdom will start to decline-and some recruits from other villages won’t join you if the town isn’t satisfied. So, you’ll need to take care of your own before you start handing out too many pamphlets.

To build homes, you need resources. If the kingdom has at least one idle worker to spare, and a hangar built, you can send that worker down on a glider to gather resources for the stockpile. Some of these resources include: water, food, coal, clay, relics, and quartz. This becomes your daily routine as the overseer of the soon-to-be grand, floating city. You drift across the land, gobbling up resources as you please and absorbing those curious enough to join your cause. As mentioned earlier, these resources can be used to either upgrade your city or trade with various kingdoms. Each kingdom has a quest for your growing community, most of which involve providing them with resources and seeking out a special quest item to further their own growth. Only after helping build this new kingdom up will they agree to join the alliance, and even offer up some of their own inhabitants in exchange. 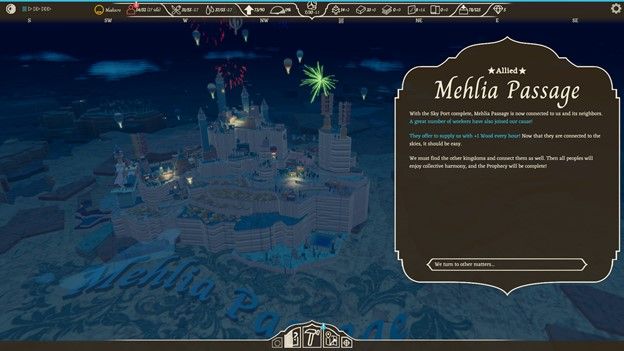 So here we are, floating slowly through the air with the lanterns of tiny clay homes blinking gently like stars in the colorful night sky. Your inhabitants’ bellies are full, but they crave something more. This is where their desires come in. Desires are part of one of the many branches of research that you can dedicate time to in order to increase the stability and happiness of your people. The cold, dark nights make them crave light. Some wish for it in the more physical form of street lamps, and others crave shrines and faith-based structures. 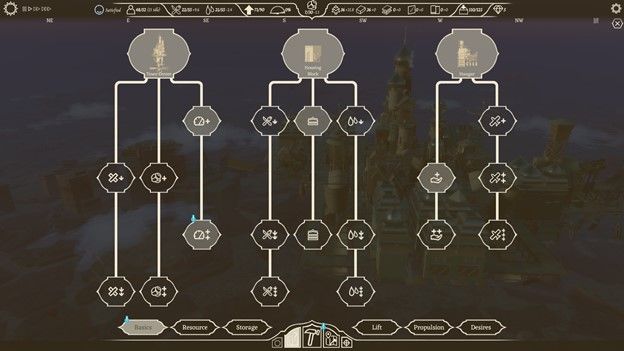 In some instances, survival may need to come first. For a time, the inhabitants will be unhappy. But the structural integrity of the city is imperative to maintain if you want the city to remain floating. As you recruit more followers and build more homes, the city will actually tilt from side to side and become heavier in some cases. This weight can lead to drag, which can tremendously slow down your already sluggish voyages. To offset this, you can research other structures that increase the city’s “lift” and “propulsion”. Think of them like supporting beams and extra motors, but in the sky. 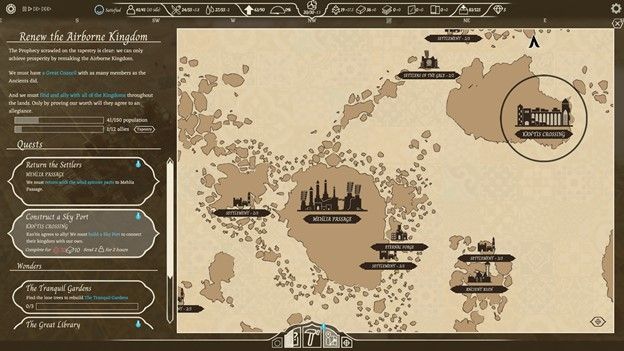 Once your kingdom is in order, you can make longer journeys to visit the last remaining kingdoms. While the lore for the world is deep and rich, I wish that there would have been just a little more to interactions with the kingdoms. I loved seeing the colorful construction process in progress, but it always amounted to a handful of quests and you were on your way. Even the villagers you recruit are just names in the grand scheme of things, with nothing to differentiate them. They’re just some numbers to add to the workforce.

A neat feature that I wasn’t expecting to encounter was the Photo Mode. If you’re particularly proud of your floating kingdom, you can pause the game where it is, enter Photo Mode, and spend the next thirty minutes crafting a beautiful screenshot to share with your friends. I didn’t think I would get much use out of it, but the world itself is so beautiful and mesmerizing that you can get really sucked into the editor for long periods of time if you aren’t careful.

The journey from a small village to a thriving kingdom is a long one, even with a few speed upgrades in the beginning. But after a solid 8-10 hours, you’ll probably reach the end of that adventure. Adjusting to the slow pace takes some time, but once you settle into the gameplay, it almost becomes meditative in a way. It’s relaxing to just set a course for the city, and lean back in your chair and watch the little meeples go to work. 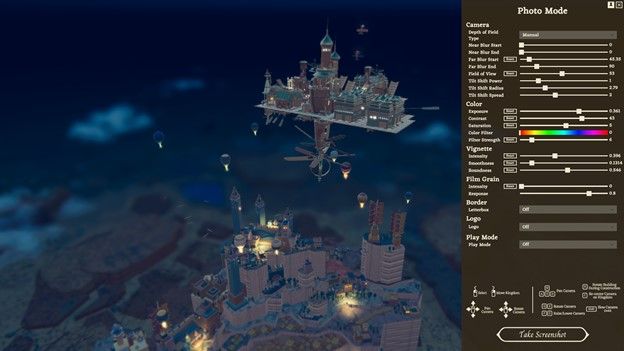 While the music, opening narration, and world-building were absolutely fantastic, I did feel a little disappointed in the direction of the story. It could have been so much more-so much larger! From the first venture, I found myself wound up in the fantasy of the world, and couldn’t help but hum Studio Ghibli’s Castle in the Sky theme as we drifted along. However, it felt like I was waiting for a turn, or a twist-something that revealed a sinister underlying theme. The world was practically begging for it, but that never happened. The lack of conflict between the kingdoms cemented this disappointment as I played. Regardless, it is still a gorgeous game, with incredibly relaxing gameplay, and an enjoyable building experience for those that seek out city builders.