Originally released in March 2018, Ni no Kuni II: Revenant Kingdom is now on the Nintendo Switch in its full glory. The Prince’s Edition includes the base game and all 3 DLC including: The Adventure Pack, The Lair of the Lost Lord, and The Tale of a Timeless Tome. However, is the aging title worth full retail price, and how does it handle on the Switch’s hardware?

For those not familiar with Ni No Kuni II: Revenant Kingdom, it’s the sequel to the JRPG Ni no Kuni: Wrath of the White Witch. While both are set in the same world, they take place during different timelines and the stories are not related. Furthermore, besides a similar setting and aesthetic style, the games play completely different.

Ni no Kuni: Wrath of the White Witch is a semi-turn based JRPG, and Ni No Kuni II: Revenant Kingdom combines action RPG, kingdom simulator, and real-time strategy. I know many people adored the combat system in the first game, but I found it clunky compared to the free-form action combat in the sequel. Therefore, if the combat system turned you off to the original game, it’s definitely worth giving Revenant Kingdom a shot.

This time around, the story follows King Evan and Roland as they try to unite the kingdoms of the world against a common threat. While the visuals give off a cartoony vibe, there are various mature themes in the game akin to that of another franchise about games and thrones.

In the opening scene, Roland is depicted as a modern-day government official who gets caught in a missile blast right before he teleports to Evan’s world. The young king doesn’t have it any easier as we quickly learn his father has been murdered and a coup de grace is in motion.

Without knowing much about his new surroundings or what’s going on in general, Roland escorts Evan out of his castle and the two set off to start a new nation. Obviously, starting a brand new kingdom and uniting the world under a single banner is no small task. Each of the four major kingdoms has their own problems that need solving, and many colorful characters are met along the way who are willing to lend a hand.

Even if the game’s general theme isn’t revolutionary, each kingdom you visit has its own surprising twists that tell an interesting story. Additionally, the aesthetics add a ton of charm to the game. It feels like you’re directing your own animated film, which makes sense because Level-5 brought in artists (animator Yoshiyuki Momose and composer Joe Hisaishi) who previously worked on Ghibli movies.

Finally, one of my favorite aspects of Ni no Kuni II is the varied forms of gameplay. In the dungeons and overworld, the focus is on action RPG combat with a team of 3 characters and 4 higgledies. There are the standard light, heavy, ranged, and special attacks. While typically AI controlled, your magical higgledy helpers will occasional send out a signal that their special power can be activated. This requires a combination of combat skill, battlefield management, and timing.

Next we have kingdom management. In order for Evermore to expand, new buildings must be constructed and citizens recruited. Over time, a special currency called Kingsguilders and raw materials gathered by your citizens are accumulated. Each building can be assigned personnel, which can in turn research new recipes, passive abilities, or magical spells. There are a ton of things you can do within your kingdom to make your party more powerful. Furthermore, Evermore isn’t some passive kingdom you click to upgrade. Evan can actually run around his kingdom, talk to his citizens, and shop/upgrade abilities or equipment.

The last major game mode is Skirmishes. This is a strategy game mode where Evan controls up to 4 army units to conquer objectives. Instead of fighting, Evan moves his units around the map, builds structures, and commands special abilities. Before a skirmish starts, players can select which units to bring or spend currency to upgrade their strength in battle. This mode is a little simplistic compared with true RTS games, but it’s a fun side mode regardless.

Even though I don’t feel it quite justifies the price tag, including all of the post-launch content in Ni no Kuni II: Revenant Kingdom Prince’s Edition is a nice touch. The major DLC adds a couple of new stories to the game in the form of The Lair of the Lost Lord and The Tale of a Timeless Tome, however, the most important addition is probably the upgraded difficulty settings.

At launch, Ni no Kuni II only had the ‘Normal’ difficulty setting. This is typically fine for RPGs coming out of Japan, but Level-5 really dialed back the toughness on this one and many people complained about the game being too easy. With the addition of Hard and Expert modes, there’s now an option for players who don’t want to one-shot everything in the overworld. These extra difficulty settings are hugely important for attracting players who enjoy a challenge and for increasing replayability. 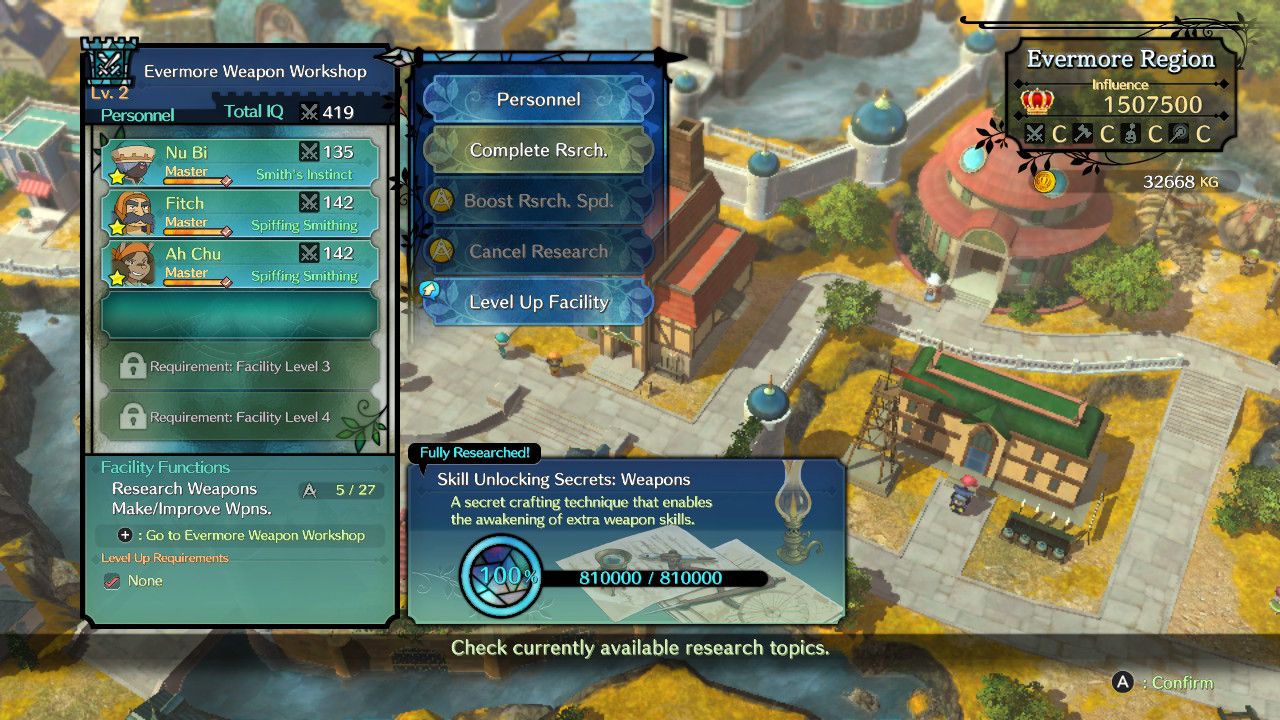 The most important aspect is how well does Ni no Kuni II: Revenant Kingdom perform on the Nintendo Switch. Considering even the standard PlayStation 4 struggled to maintain 60 FPS, it’s no surprise that the Switch has its fair share of performance issues as well.

Regardless of whether you’re playing in docked or handheld mode, the game barely chugs along at 30 FPS in town and dungeons, and it can dip significantly during battle or while traversing the overworld. Additionally, the graphical fidelity, shadows, lighting, and resolution have all been dialed down from the PlayStation 4 version.

Surprisingly, Ni no Kuni II plays slightly better in handheld mode, but this is probably because it’s downscaled to 720p instead of trying to force 1080p resolution. Still, the stuttering is at best distracting during travel and at worst frustrating during technical boss fights.

With that being said, the Prince’s Edition is not the best version of Ni no Kuni II, but it is the most portable. If mobility is key then consider picking it up on the Switch, but if visuals and performance are more important than a significantly better version of the game can be found cheaper elsewhere.