Superhero mania has taken the world by storm over for more than a decade, and it seems as though there are no signs of that slowing, as we’ve seen a plethora of popular Marvel titles hit the scene, with plenty more on the way. Marvel’s Midnight Suns stands apart from the Marvel’s Avengers and Marvel’s Future Revolution as a game that provides robust strategy, a nuanced story, and one thing that few Marvel games, if any, have – character creation. Despite the stark departure from the other Marvel games on the market, how does Marvel’s Midnight Suns stack up against other Tactical Strategy RPG’s? Let’s dive in with our Marvel’s Midnight Suns review.

Midnight Suns is a game based around the original comic book team the Midnight Sons that hearkened back to a 90s crossover between several popular heroes including Blade, Ghost Rider, and Morbius, and has since evolved over time to include many other primarily magic-based and demonic characters, such as Doctor Strange, Elsa Bloodstone, and Nico Minoru. The latest version of the team that has been assembled in Marvel’s Midnight Suns is more of a capitalization of popular characters. Iron-Man and Hulk sit alongside series regulars such as Blade and Ghost Rider, (although this time around they are utilizing Robbie Reyes instead of Johnny Blaze.

The story follows the reawakening of Lilith, the Mother of Demons, as she attempts to open up a portal and unleash, you guessed it, Hell. In order to stop her, Doctor Strange, Caretaker, and more magical heroes resurrect The Hunter, who was able to best her hundreds of years ago. This is essentially where the real story begins, and about as far as the spoilers will get. There are some twists and turns throughout the story, many of which are geared to introduce a bevvy of new characters, and at other times, are built to give some backstory to the Hunter character and build his light or darkness affinity. The Hunter is a new character to the Marvel Universe, and if you’ve been itching to finally create your own character in a Marvel game, this is where you can do that. 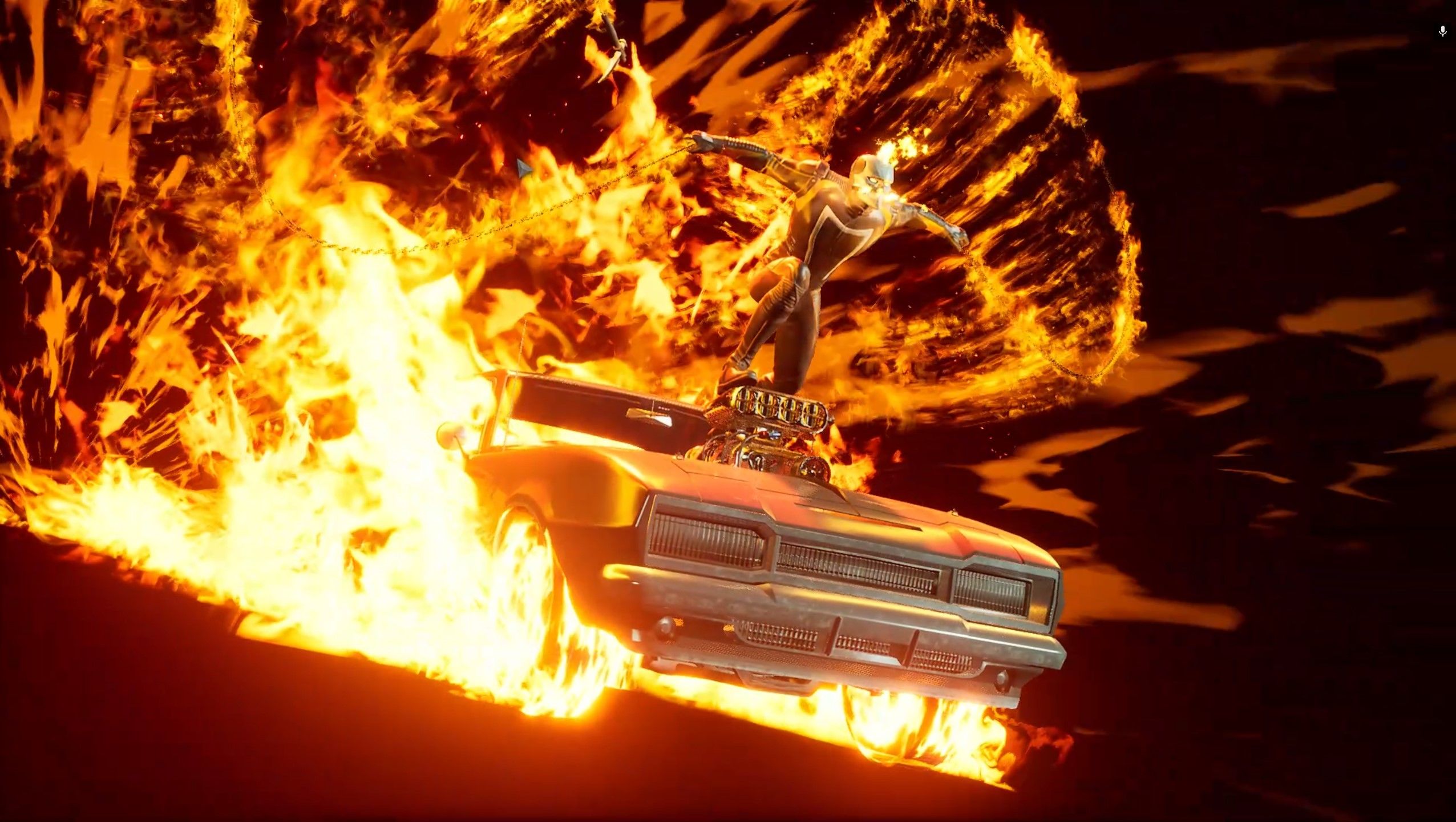 Hunter can be either male or female, and the character customization options are somewhat limited at first, but eventually you can unlock new costume pieces to further customize your outfit, both in and out of combat, and match your preferred colors once you unlock them. The customization continues for not just Hunter, but all of the Marvel heroes as you dredge further into the game. As you unlock new characters, and flesh out your team, you can eventually have an interesting looking stockpile of costume pieces and iconic character costumes to dig back into, and for those costumes you don’t have, 2K Games and Firaxis is willing to sell you those for a little coin, called Eclipse Credits. Luckily the coin and cash shop costumes are not so off the way in price, that if you really needed a premium costume to enjoy the game, it won’t take an arm and a leg to get one.

Welcome the Midnight Suns, Every Morning

Before we get into one of the best things about the game, which is the strategic card-based combat system, let’s take a detour around The Abbey grounds. The Abbey is the base of operations that hides the secrets of The Hunters past. The grounds can’t really be described as vast, but there’s enough exploration to be had there that you can spend a big chunk of your time running through the grounds to find secrets, earn rewards, and pickup crafting materials. My main sticking point with exploration is the rigidity of the area, where you can’t jump or get around obstacles particularly well, which makes exploration kind of a chore, even with the inclusion of fast travel. To make your way through the Abbey grounds and unlock more secrets and items, you’ll need to complete puzzles and find Moon Seals that will unlock Words of Power, which are abilities you can use out in the semi-open world. 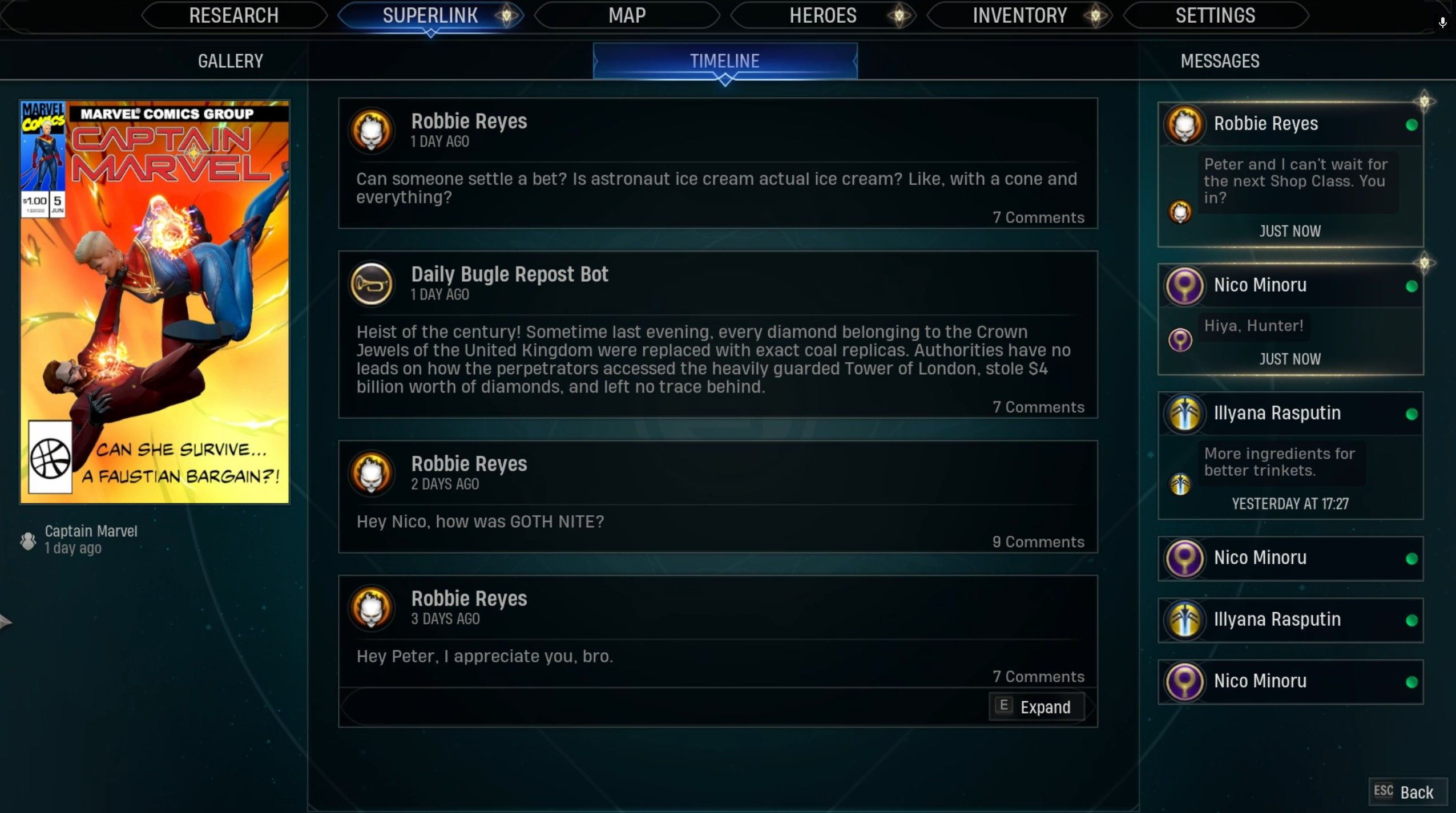 Much of The Abbey grounds are locked away, but unnecessary to complete if you just want to go through the main story. Even without running around the grounds and unlocking secrets, finding arcane keys, and unlocking arcane chests, there are plenty of things that you’ll need to manage to become a strong and cohesive team. Midnight Suns provides Hunter with a Superlink, which acts as kind of a group message board, complete with a series of private messages that the player will unlock by completing missions and becoming friends with other heroes. Even superheroes get lonely, and you can grab a drink with Ghost Rider or watch a movie with Spiderman to increase your friendship, which will eventually open up new opportunities in combat, and grow your bonds as a team.

As interesting as it can be to hear stories from your favorite characters, there are some side stories that you can’t exactly get away from, like the EMO Kids secret meetings, which does flesh out the story a little, but between the jokes you tell Tony Stark and the constant prattling from Nico Minoru, it can often pull you out of the game when you just want to daisy chain some missions. There are an abundance of upgrades and training that can slow down your progress, even if it is all in the name of maximizing your power. Daily sparring sessions will provide your favorite heroes with XP, and intel missions, where you’ll have to send a character off and thereby make them unusable for a time, are diversions with decent rewards, but largely a hassle after several dozen hours of playing. 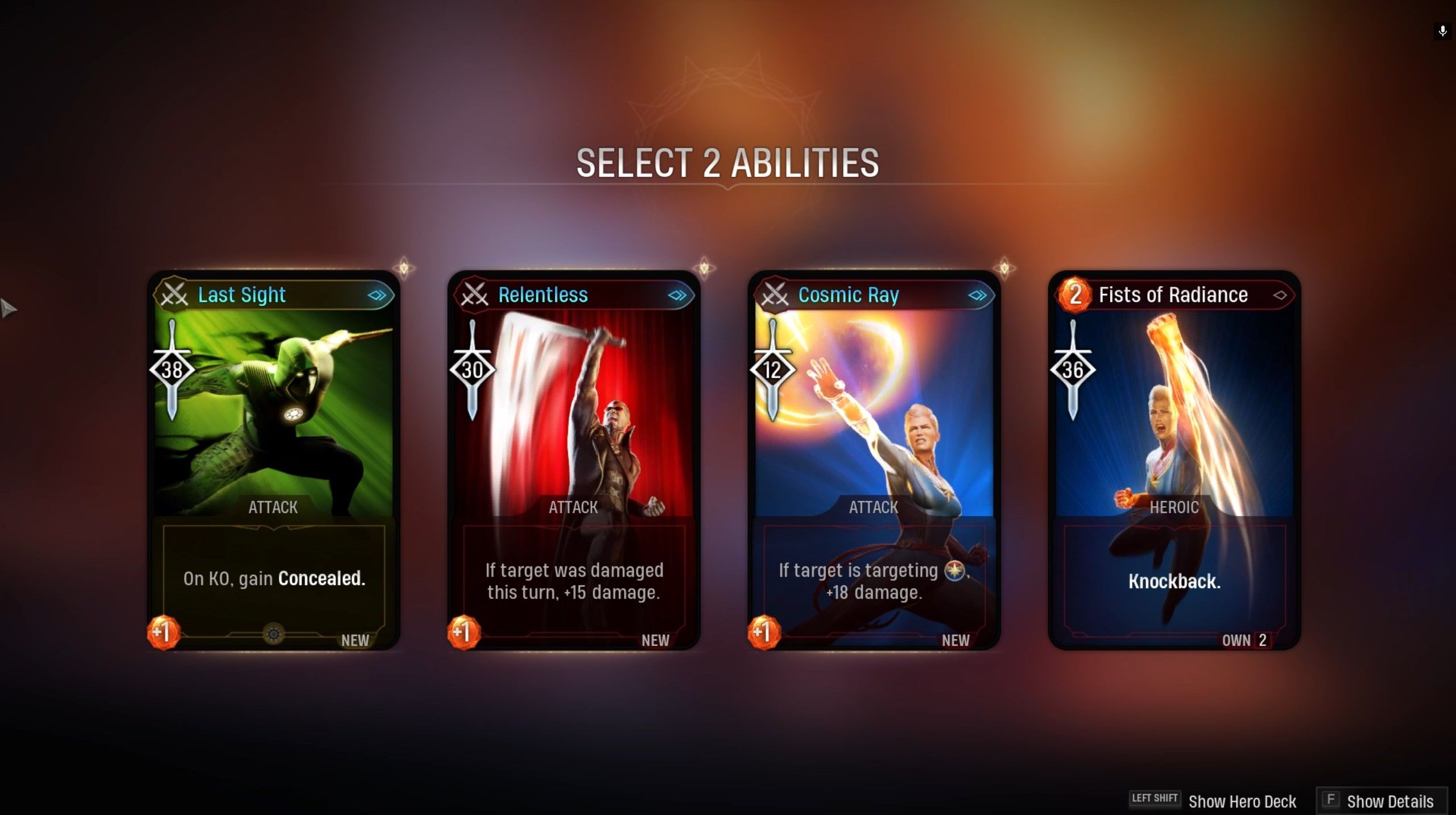 Repetitive systems aside, unlocking artifact and crafting one-time-use cards or abilities will be paramount to your survival and success. That means that, when you’re not on a mission, or out exploring the Abbey, you have to remember to upgrade your cards, research training ground upgrades, scout your latest intel, talk to your various team members, it can be a lot to handle after every single mission. You also have to take a short nap in order to move time forward and prepare for the next mission. Once everything resets and you knock out your daily routine, you can then go to the mirror table to select your next mission.

The combat of Marvel’s Midnight Suns is really where ethe game shines the brightest. While it could be compared to XCOM, the combat is card based, and your heroes can even become injured, which will make missions more difficult. There are several hard and fast rules to the game, and it all plays like a a strategy card game, like Hearthstone or Legends of Runeterra. Each character has a special ability, and their cards often revolve around their unique mechanics. For example, Ghost Rider has to balance hurting himself, alongside hurting others, but he is also endowed with the ability to lifesteal, which makes his playstyle a great balance of risk and reward. 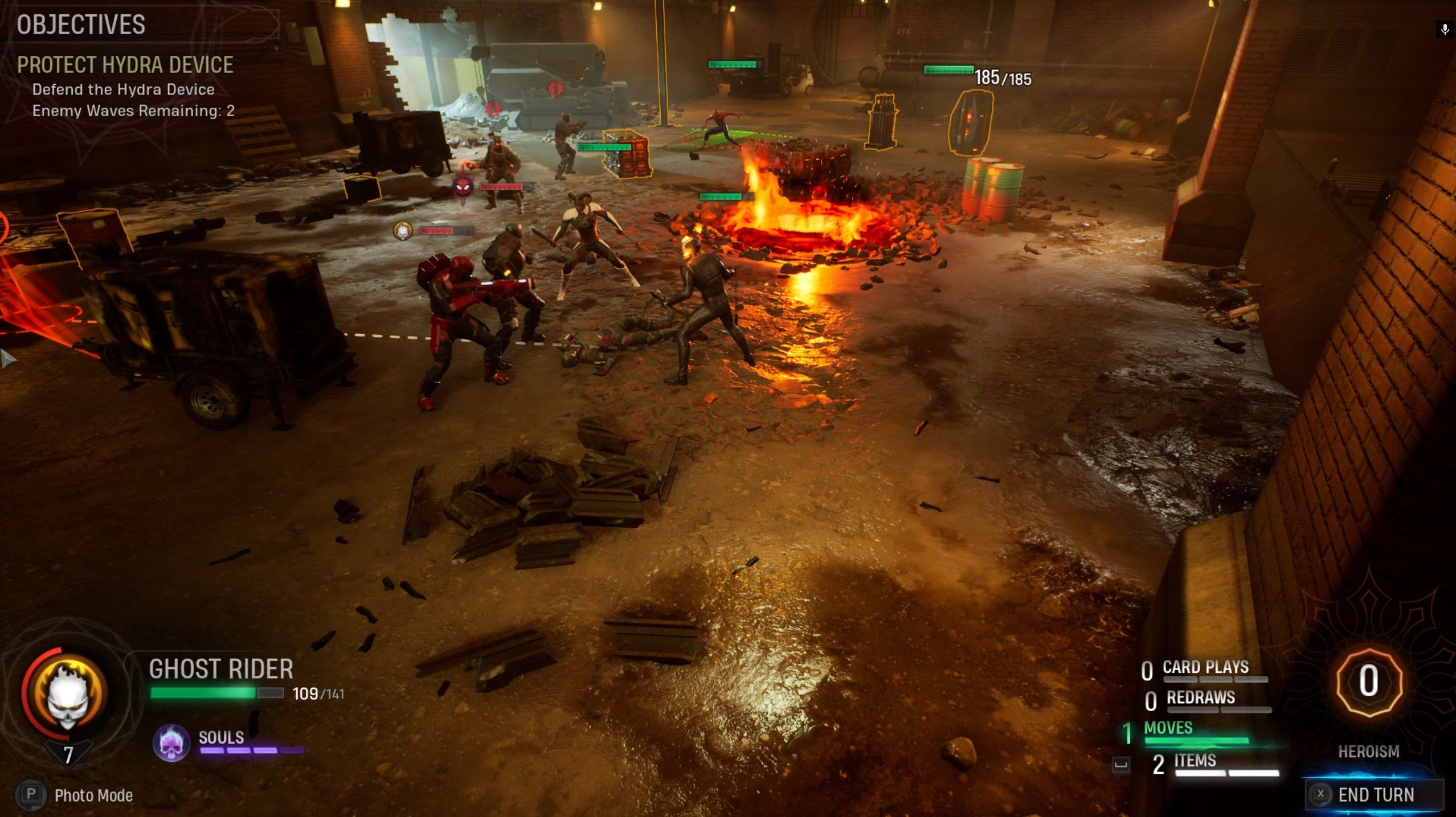 Missions will also have objectives that could come in the form of stopping a truck from getting away, to defeating all the enemies as task, and sometimes you’ll get bosses that crash the party, and change the entire dynamic of the mission. When you start the game, you have only a limited number of cards in your hand, and you can only play a total of 3. You will have a mixture of attack, support, and heroic cards, which will each require a different resource to play, on top of the limited number of cards you’re allowed each turn. You can then choose to redraw some cards, or plan environmental attacks which don’t cost a card play, but they do require your character line up perfectly to utilize those weapons, and it will also take a few of your hero points depending on the type of attack it is.

There are nuances to everything you do and how you go about your objectives. Some enemies are meant to be killed in one hit, while others can protect a mission objective and you will need to break that protection to move forward. In some instances, enemies will carry mission-specific cards that you need to retrieve. Everything is laid out in a way so that you really need some planning and forethought before you take on some of the more difficult missions. Knowing your characters well can be the difference between success and failure. If you have a penchant for well-placed attacks, ample strategic posturing, and in-depth deck building, then the combat in Midnight Suns will be an absolute pleasure to play.

Should You Rise Up for the Challenge?

Marvel’s Midnight Suns is a lot of character and base building built into a unique deck building Strategy RPG. There are some story pieces that just aren’t entirely enthralling, and you may find the exploration to be lacking. What Midnight Suns does happen to do exceptionally well, is provide a purely satisfying strategy game, once you wade through all of the monotonous upgrades to get you to the combat. With plenty of characters to unlock, and multiple difficulty levels to amp up the strategy required, this is one of the best Marvel games to release in years. The best part is, whether you’re a Marvel fan, or you’re just a strategy buff, Midnight Suns delivers. Do not make the mistake of passing on this one.