After a long, 3-year wait Smilegate’s MMOARPG Lost Ark will finally be available in the West at the end of this week. While the MMOARPG, which will only be available on PC through the Steam store, will be published by Amazon Games in North America and Europe, the studio will be mostly hands-off and the game will follow an update roadmap laid out by the South Korean developer.

For those not familiar with Lost Ark, despite the tremendous amount of hype it’s received over the past couple of years, it’s an isometric MMOARPG where the focus is initially on killing massive hordes of weaker enemies and then gradually escalates into a gear treadmill with variety of daily and weekly tasks to complete.

One key thing to note is that Lost Ark does not play like a typical Action RPG. Aside from the isometric camera style, Lost Ark doesn’t really play as closely to Diablo or Path of Exile as it might seem at first glance. Players looking for intense, dungeon-crawling action and finding troves of shiny, randomized loot are probably going to be disappointed.

Instead, Lost Ark feels much closer to TERA, without the BAMs, from a top-down perspective. While this is not an inherently bad thing, it’s easy to take a look at Lost Ark and find something completely different than expected.

That being said, the combat is solid and very action-packed compared to traditional MMORPGs. Each class has a basic attack and can equip 8 skills, an ultimate, and has a class ability that can be activated by filling up a charge meter. Each skill can also be leveled up, which increases damage and unlocks powerful passive abilities or sometimes morphs it into something completely different. 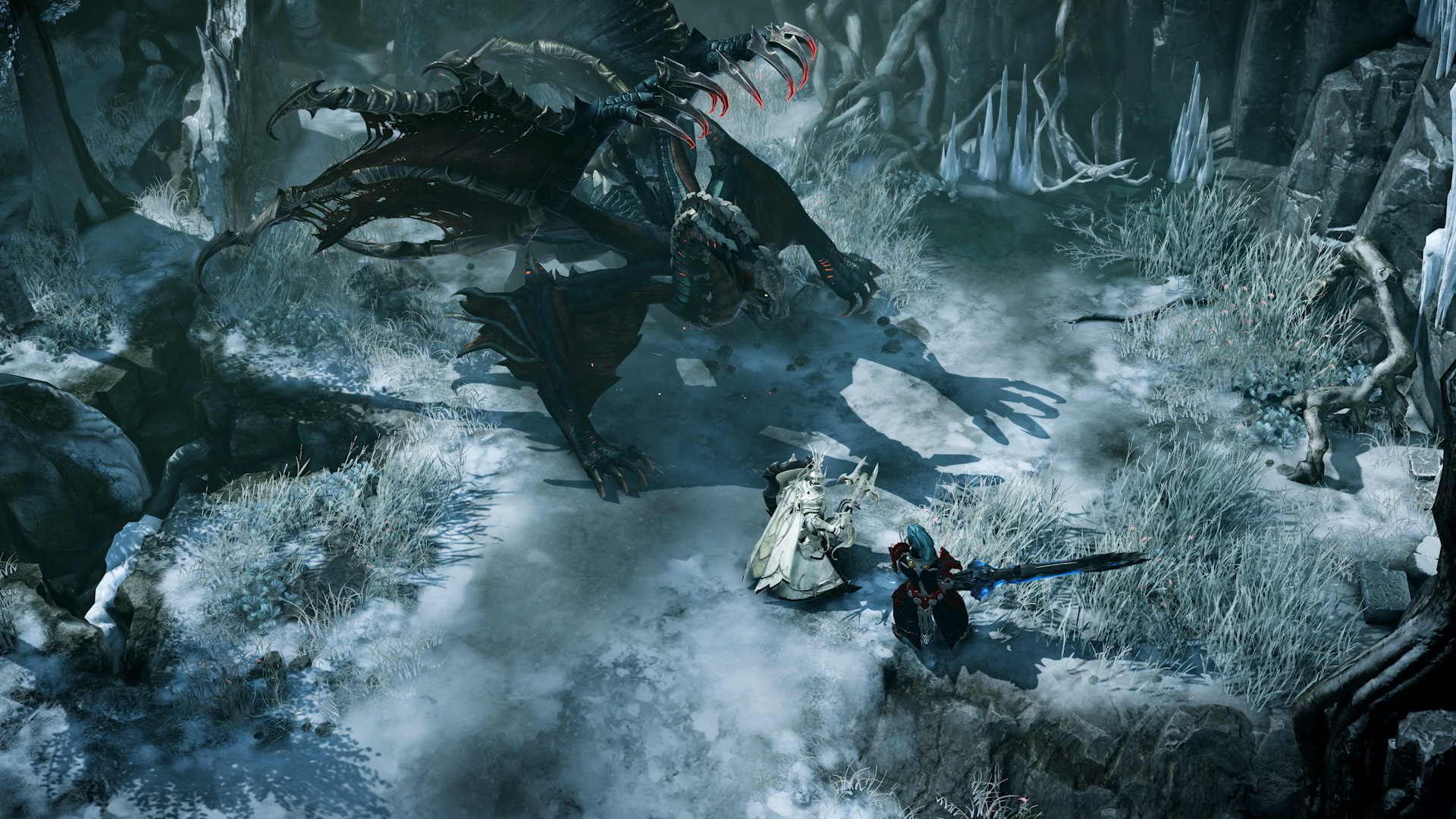 With all these skills on-hand, players are typically able to spam their cooldown abilities without running out of skills and having to rely on basic attacks. This leads to a focus on ability rotation, similar to that of other MMORPGs. There is only one primary attack and no resource spending secondary abilities, besides the class abilities which charge relatively slowly.

While this does provide more attack options at any given time than a typical ARPG, it makes each skill feel less impactful and less important. During my playthrough as a Mage, all of my skills were about some type of AOE (area-of-effect) damage. There were hardly any utility abilities or skills worth saving for particularly difficult fights. It was simply spam what was off cooldown and would do the most damage or hit the most enemies.

The lack of utility and movement abilities also likely led to a slower combat design. Many of the boss fights centered around dodging large but slow telegraphed attacks. Even when these do land, they’re not particularly dangerous until the endgame. This feels underwhelming compared to even early boss fights in Diablo 3 or Path of Exile, where missing a dodge or defensive skill can mean death.

Slogging Through the Story

One of the biggest disappointments with Lost Ark is its terribly boring early game. Almost the entire process from level 1 to 50 is clicking on a quest icon, running to the next quest icon and killing a handful of mobs along the way.

Most enemies in the game are so easy to kill that literally all you need to do is find a decent group of enemies, hop off your horse, cast a single AOE spell and be on your way. There’s virtually no challenge to be seen in the open world during the early game, and trudging  through dozens upon dozens of zones that look similar and playout the exact same way doesn’t leave a good first impression.

This might be excusable if there was a point to it all, but there really isn’t. There’s nothing worth exploring along the way, and the story is mediocre at best. The player needs to work with a half-demon priest, and an exiled prince to find the 7 lost arks and defeat the impending demon threat. Everything else is just filler, and killing grave robbers and collecting bear claws does not make me feel more immersed in the world.

There are a few story dungeons along the way, but these are also quite hit and miss. The first couple feel just like the open world: kill a few dozen enemies and then take out a damage-soaking boss.

However, I will say that Smilegate does a good job of making a mission feel cinematic.That is when it really wants to. The Glorious Wall battle felt truly epic while riding on a siege tower, falling into a pit of rubble, having to climb back out, and then jumping into an enemy castle courtyard to hold off hundreds of soldiers. With that in mind, it was all very much still ‘cinematic’ and nothing about the battle was challenging in the least.

Thankfully, the leveling process is relatively short compared with most other MMORPGs, and it only takes around 15-20 hours to hit level 50. Once players reach level 50, the endgame begins but additional skill points can be earned from levels 50 to 60.

Even if the leveling process for Lost Ark is not very long in the grand scheme, it could have either been shortened and hyper focused on the story, or expanded and made more interesting instead of being a mostly point-and-click adventure. This is content that will probably be played once by most players, and those who can afford so will likely pay to skip it on their alt characters.

Once players hit level 50, an entirely new game opens up. Instead of going from place to place picking up snippets of story, players will mostly be engaging in grinding instanced combat to level up their gear. This includes Chaos Dungeons, Guardian Raids, Boss Rush, Abyssal Dungeons, and the Tower.

Chaos Dungeons and the Tower are solo experiences and typically the starting place for newer level 50 characters. The former is essentially a horde mode where multiple waves of weaker enemies are thrown at the player across a few different stages. The Tower is a ladder climbing mode with challenges, waves of monsters and occasional boss fights with varying requirements. Boss Rush and Guardian Raid can be played alone, but are typically more enjoyable with a party. Boss Rush is exactly like it sounds; players face off against bosses one after another. Each of these game modes can get extremely tedious if you don’t enjoy doing the exact same content over and over. Even with the different levels and tiers, they all start to blend together in the end.

Guardian Raid is one of the more interesting game modes and is similar to the monster hunter genre. A group of players will need to track down a giant enemy across a large battlefield. Each player has a limited number of consumables and can only be knocked down a certain number of times, which adds to the tension and competitive nature of the mode. Once a player locates the beast, they can signal to their allies via a flare that reveals the monster. These bosses are often incredibly strong and require learning their individual rotations in order to take them down. This leads to one of the most engaging and dynamic endgame experiences in Lost Ark and is by far the most fun in terms of repeatable content, especially if you enjoy the aforementioned Monster Hunter genre.

Each of these modes has various tiers and levels within each tier with a recommended gear score. Completing the dungeons will either drop equipment, accessories, or upgrade materials that can be used to improve your gear score and allow you to move onto the next level of content. Rinse and repeat. Unfortunately, all of this content does come with daily and/or weekly lockouts, which encourages the use of alts for maximum efficiency. Repeating the same content on different characters only heightens the grindy nature of the game.

In addition to the dungeons, there are a few other aspects of the PvE endgame that don’t have to be taken as competitively. Strongholds are instanced housing where players can build structures, recruit workers to send on missions, craft items, and research upgrades. Strongholds are quite vast and offer a lot to do if you’re into managing your own little kingdom. Finally, there’s sailing, which could almost be its own game. You can sail around the ocean, picking up currencies for upgrade materials and visiting islands which have their own quest hubs. I found each of these modes charming in their own way, and they do provide a good break from the endgame grind. 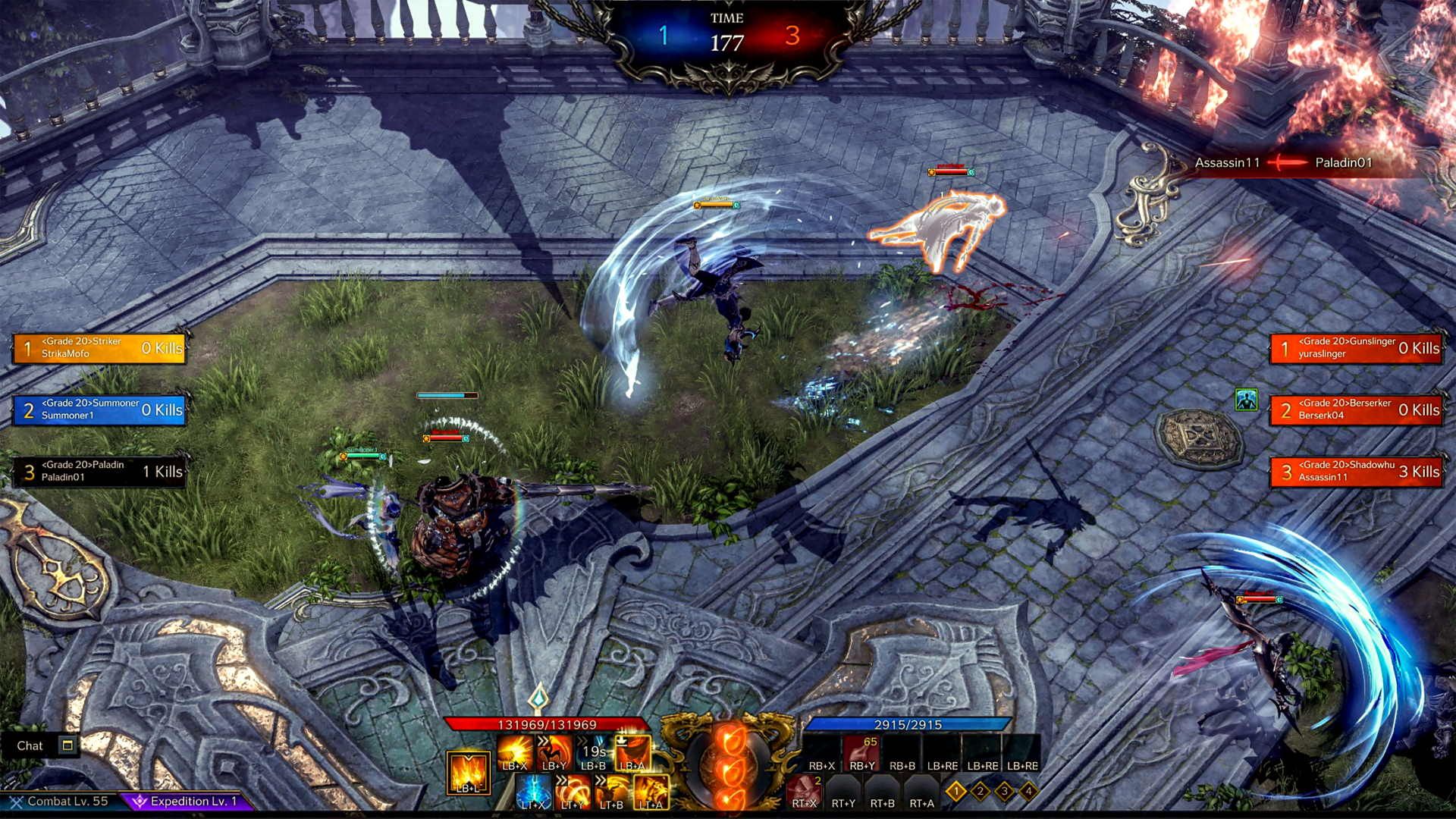 For those interested in PvP, Lost Ark does offer a plethora of options for casual and competitive PvP. These consist of Team Deathmatch, free-for-all Deathmatch, and Team Elimination. In both deathmatch modes, the point is just to rack up as many kills as possible. In Team Elimination, each team fights 1v1 battles until all opponents are killed. One of the biggest draws for Lost Ark PvP is the fact that all gear and skills are equalized. This puts everyone on an equal playing field where player skill really determines the winner. Player-versus-player balancing is often a huge complaint in MMORPGs, and Lost Ark at least removes gear or any pay-to-win advantages from the equation.

While it’s clear that Lost Ark isn’t necessarily an ARPG, but rather a traditional Korean MMORPG with an isometric view, Smilegate is very clearly looking to cater to a specific audience. Lost Ark finds itself focused on a never-ending gear treadmill, and it does an extremely good job at it. Unfortunately, casual players who want to explore an interesting world or want diverse or more dynamic content will likely be let down. And while Lost Ark is fun, the arduous leveling process and repetitive endgame will likely lead to polarizing opinions about it, with most players either loving or hating their experience in the end.