In February of 2012 Kingdoms of Amalur: Reckoning entered the vast RPG arena, looking to dethrone Skyrim and the other top role-playing games of the era. It had its rough edges, sure, but for a brand new team developing the first game in a brand new world Amalur really impressed with its deep lore, epic story, and interesting NPCs.

Meanwhile, back in the non-gaming world, plans for a overarching Amalur MMO were on the table before the developers got into a bit of a tiff with the state of Rhode Island. Unfortunately the studio was shuttered after declaring bankruptcy, leaving Amalur as the sole entry in what was a promising new franchise. For eight long years this was the case, but now in 2020 THQ Nordic has taken the mantle, and Kingdoms of Amalur: Re-Reckoning re-inserts the epic adventure into the spotlight, and the game holds up extremely well.

Everything from that previous game has been restored in Re-Reckoning, this is the same exact release that hit stores back in 2012. The “everything” in that sentence is crucial, as it includes all of the pre-order bonuses and DLC...among them a full set of armor designed to look like Commander Shepard from Mass Effect. Electronic Arts published the original release, hence the crossover, and it’s a delight to know that every last piece of 2012’s Amalur has re-emerged in Re-Reckoning. 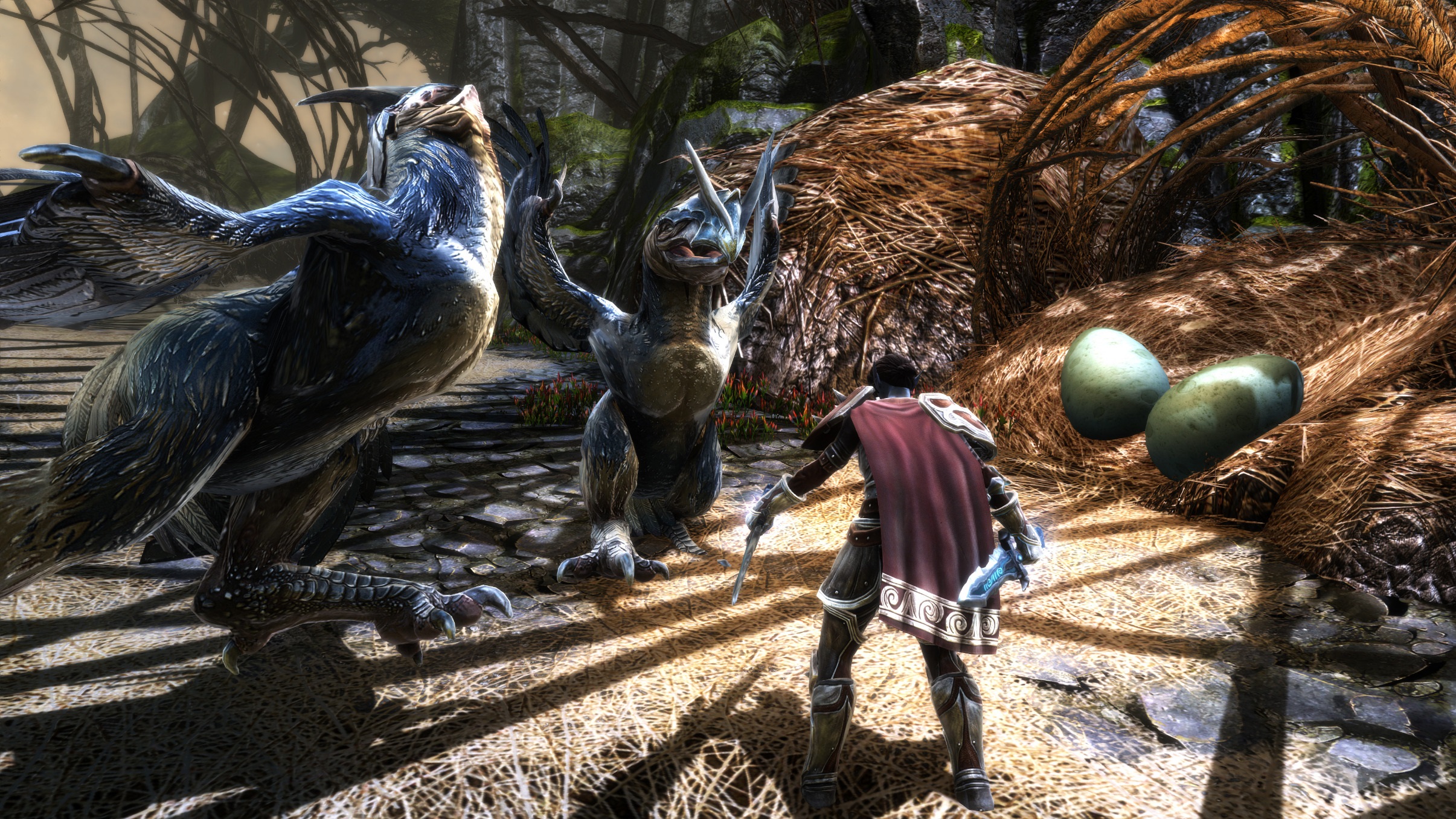 Despite being nearly a decade old, Re-Reckoning feels very modern, like playing a popular MMO but in single-player format. Granted there’s only so much that can be done to an eight-year-old game without completely tearing it down and starting from scratch, the game certainly isn’t threatening any uncanny valleys, but there is a noticeable upgrade in this remaster that old players should appreciate.

At first glance the game does not bear much of a difference visually from its predecessor, the character models, animations, and environments all look remarkably similar to the first go-round. Side-by-side, however, one can really see the intricate details poured into the different areas here in Re-Reckoning. The game also maintains a solid 60 frames-per-second throughout the adventure, with the occasional dip here and there depending on how many enemies are on-screen.

The game certainly has its warts, however, with some of them really standing out. A few areas feature random branches that pop in and out of the environment at random, with no explanation as to what they are or why they’re there. A few characters will begin to speak before popping into the frame during conversations, which is really hard to ignore. In one area the player character suddenly transported into the ceiling of a cave during a skirmish, taking perpetual damage while up there and eventually leading to his death. This only happened one time in one area, it’s not a prevalent bug by any means, but it’s still super frustrating during a long session.

What made the original game so good was its dynamic combat system, and that is completely intact here. Players can choose between swords, magic staffs, daggers, and unique dual-bladed tonfa-esque weapons called Faeblades, usually based on the type of character being built. Those who fill the Might ability tree will prefer the heavier hammers and swords in the arsenal, while roguish heroes with a penchant for Finesse attribute might prefer daggers, and it’s completely up to the player to decide. Re-Reckoning gives players a freedom in creating a character that few other games possess, and that powerful feeling is a major boon to the game. 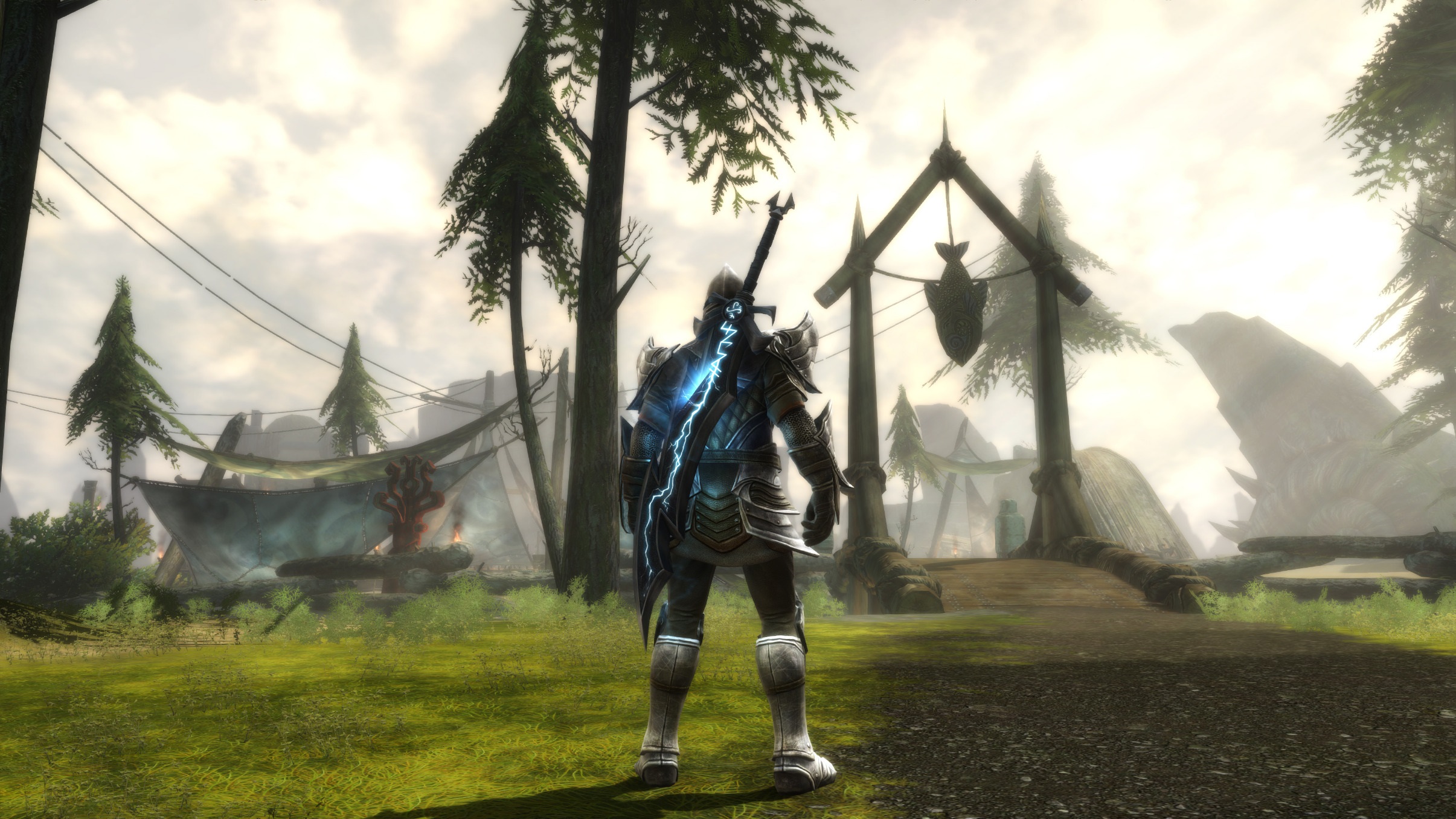 The best part of the freeflow combat system, however, is being able to switch between two different weapons on the fly and perform ridiculous combos. There’s a power in knocking an enemy into the air with a greatsword, then chipping more health away with a fast Faeblade combo while the helpless minion flails helplessly in the air. The potential combinations are seemingly limitless, especially when the aforementioned ability trees impact the character’s style of battle as well. For all the good upgrades THQ Nordic made to this game the combat was left alone, which is easily the best decision they could have made. .

Kingdoms of Amalur: Re-Reckoning is the same game many of us fired up for the first time back in 2012. For the most part that’s a good thing, the vast world offers plenty of paths for the player to take and the combat still feels so dang good. The technical improvements are well done also, the extra details of each environment adding a little more color to Amalur’s world while keeping the framerate manageable. There’s still a few warts along the way, mostly involving things and people popping into view when passing or speaking to them, but none of them break the game to the point of starting over. Kingdoms of Amalur: Re-Reckoning accomplishes everything a remaster should accomplish, and stepping back into Amalur should be a top priority for everyone.