High on Life mechanically as an FPS is a mediocre title. But as the first outing in a unique setting, it is held up by its visuals, voice acting, and characters. Developer Squanch Games and writer Justin Roiland, best known for Rick and Morty on Adult Swim, have created a fun experience so long as players enjoy this style of humor. But even then, it could be too much for some fans.

High on Life opens with an interesting intro. The game does three main things here: previews what is to come, introduces the silent protagonist, and provides an initial tutorial. The developers did a good job with the sequence, throwing players into the deep end for this game’s style of humor, typical subject matter, and level of swearing. If a player doesn’t at least get a chuckle out of the intro, chances are they won’t like the rest of the game’s narrative and jokes.

Once the intro is interrupted by the main character’s sister, Lizzie, players can choose their appearance from a few different options. There are no sliders, they are all premade characters, but at least there is some choice. High of Life quickly ramps up the main plot as Earth gets invaded and humans become the sentient drug of choice for aliens. To save the species and the planet the main character becomes a bounty hunter, specifically hunting for members of the G3 drug cartel. 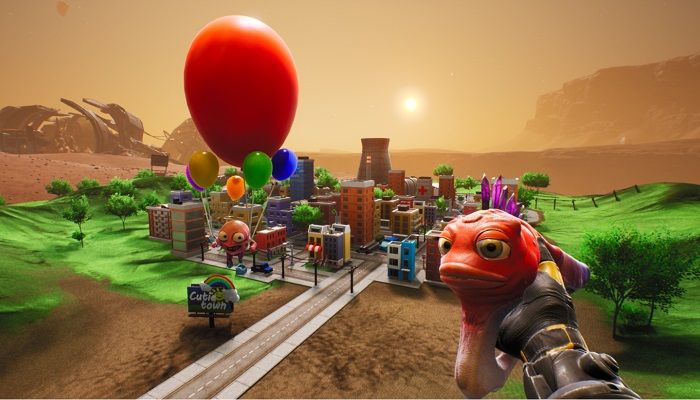 High on Life’s visuals are a great experience. Each area you warp to is bright and colorful with a good variety of characters to interact with. It supports the wacky setting that’s being thrown at players quite well. The music and sound design fit with every part of the game, and I didn't find the music overly repetitive when in combat or revisiting different worlds. 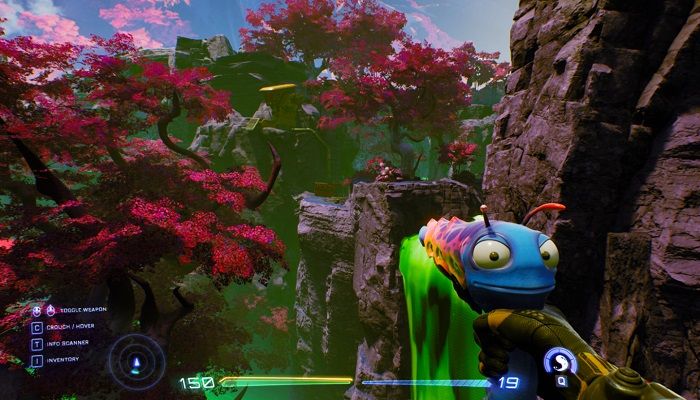 I want to make a special note here of the voice acting. While some elements didn’t land as well as the developers may have intended, the voice acting in High on Life is excellent for the ton/humor and carries parts of the game. It should be noted that High on Life has implemented some use of AI art in the game and AI voices. During my first playthrough I didn’t have anything jump out at me that screamed AI, but thinking back on it there are areas/elements that I am now curious about. Personally, I don’t have a problem with AI art/voice, but the original artists need to be compensated somewhere along the line and it needs to be used appropriately in a project of any kind. From what I can tell by casual observation, High of Life has made good use of this emerging tool.

The guns in the game, a race known as Gatlians, act as a surrogate voice for the silent protagonist. Players are quickly introduced to Kenny, the equivalent of a pistol. But it doesn’t take long to acquire the other Gatlians after defeating a few bosses. Knifey is also a lot of fun once unlocked but, unfortunately, becomes mostly a silent character until it is time to acquire proof of your bounty kills. 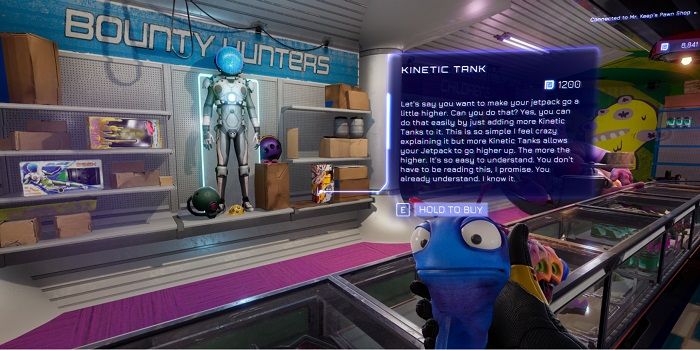 Kenny (Pistol), Gus (Shotgun), Sweezy (SMG), and Creature (Grenade Launcher) all have something in common, they talk a lot. Initially, the talking weapons are fun, but players may find it grating after an hour or two of constant commentary and swearing. Thankfully, there is a setting to lower the frequency of the comments. Each of the four main weapons has a primary attack, a secondary function/attack, and a special ability. These can be enhanced by buying upgrades from the local pawn shop or via shops found on certain world maps. Players will need to use different special abilities not only in combat but also to reach certain locations.

As players progress through the main story, they also unlock additional items to help traverse the various maps. This makes returning to some of the completed worlds worthwhile as players can reach new areas and collect more of the game’s primary currency pesos to spend on upgrades and trading cards. The typical fare of jetpack, mag boots, and grapple are all present and implemented well. 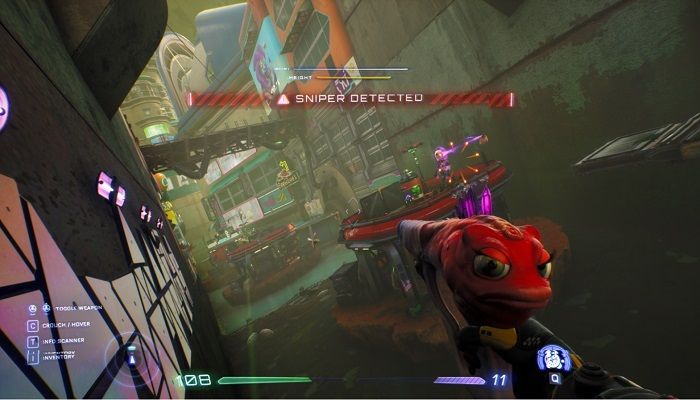 If the mechanics sound familiar, it is because they are. High on Life doesn’t break any new ground in the FPS genre. The gunplay is OK, and the combat is decently fast-paced. If players can get in melee range using Knifey’s attack feels overpowered, but satisfying. The levels are well-designed and make good use of verticality once the jetpack is unlocked. The developers also included well-placed arrows throughout different maps to help guide players during the main missions and the interactable surfaces/ledges are easily identifiable without being too out of place within the environment.

The various bosses for each bounty also make use of familiar attacks. Each one was easy to down within a couple of attempts. The enemy AI was limited, mainly showing its limitations when I positioned myself in hard-to-reach locations. While the mechanics, combat, and main story are all OK, the game shines with its slick animations, sound design, and world-building. These elements helped make this new universe fun to explore. I found myself constantly watching for the reactions of whichever weapon I had out to different events and going back to characters that complained about me just walking away during dialogue. Depending on how much of a completionist a player is High on Life is meant to contain about 10 to 15 hours of content. I finished the campaign 7.5 hours, so your mileage will vary quite a bit.

While the constant chatter of the Gatlians can get annoying after the first hour or two, they are a welcome change to simply having a silent protagonist. Though, I think the developers may have made them a bit too grating on the nerves. It makes it hard to form a strong connection with them during the game, leading to emotional story points falling flat later on. Some levels/maps also felt a bit underdeveloped and rushed. For example, there could have been more done with the Gatlians’ home, and the final two bounties felt very short.

I only ran into a few minor technical issues. The game crashed twice, but restarting from the regular save made it easy for me to jump back in and pick up where I left off. At one point, I also found myself in an unusual spot after falling into a toxic slug, when I was meant to have died. Instead, I ended up standing on a bit of terrain just underneath the toxic liquid where if I moved in any direction, other than up, I died and respawned back in the same spot underneath the death sludge. Thankfully, I had the jetpack by that point and was able to work my way out with the help of Gus' special ability.

High on Life is a decent FPS with great voice acting and an interesting new universe to explore. While I didn’t find any point in the game where I laughed out loud, if you are someone who enjoys the humor of Rick and Morty, then you will likely enjoy this experience as well. Just be aware that at different points the subject matter can be offensive to some, and the swearing is pretty much constant. High on Life may even be too much for some fans of Justin Roiland. While players won’t find anything new for mechanics and world traversal that has not been in other FPS titles, it is a good set of bones for future DLC and/or sequels.