Genshin Impact is a game that sort of crept up out of nowhere on my radar. I’m certainly not new to RPGs, nor am I new to “gacha” games. I’ve put more time (and money) into Final Fantasy Brave Exvius, Dragalia Lost, Epic Seven, and The Seven Deadly Sins Grand Cross than I’d ever care to admit. In games like this, the core element that keeps players interested is an exciting mix of fun gameplay with a collection system of trying to successfully gather all of the strongest five-star playable characters. Genshin Impact is no exception to the rule, but thankfully there’s so much game here that you’ll spend far more time leveling the generous amount of characters the game gives you than you will stressing out over whether or not you have the best possible team.

For a lot of people, Genshin Impact might be their first ever introduction to the term “gacha” and as such likely have no idea what it means, so I’m going to briefly explain it: Have you ever seen the toy in a capsule or a plastic egg that used to sit by the doors at grocery stores? They’re considerably less popular here in the US, but they still thrive pretty well in Asia. The idea is simple: you spend a quarter or two, get a toy, and try to get all of the toys in the set - but each purchase is random and you don’t get to choose, so you hope you have decent luck. We’re all now all-too familiar with cosmetic loot boxes, but in these games the best characters are often what you’re hoping for, and getting them all doesn’t typically come cheap. The reason that I feel like these games are so popular is because they provide a simple yet compelling gameplay loop that keeps players entertained while interest in the world and characters within it are often what leads people to spend money on the game. In short: The story is good and you identify with or like certain characters that aren’t given to you for free, so you want to buy chances to hopefully obtain them for your party. 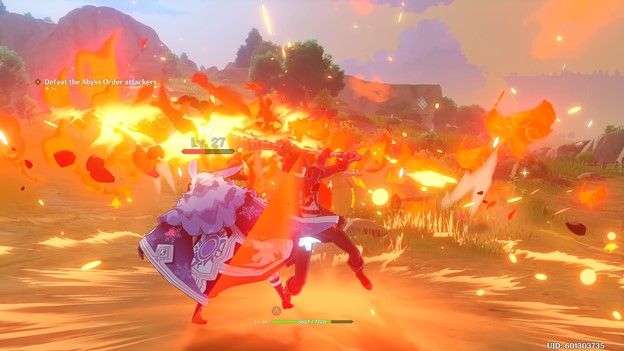 Those toy machines are named Gachapon, because of the sound the machine makes when the mechanism inside slides as the dial twists to dispense a prize. Games that operate on a similar mechanic are nicknamed “gacha”, but us westerners have adopted it to mean “gotcha”, because once they have their hooks in you, it’s so hard not to spend money for more characters/items. Thankfully, Genshin Impact has respect for its players before it asks you to pop that wallet open (and each banner does have a Pity Pull system), but it’s still not free from criticism.

If you’ve read my review in progress, you’ll note that I said the game was fairly generous with how often it gives you currency. There’s even a beginner banner that pretty much guarantees you’ll get Noelle, a four star greatsword character who has some support tools and healing ability. She’s okay, but you can honestly play everything the game has to offer so far with the characters you’ll get from progressing through the story. As a result, there’s no real reason to invest money for stronger characters, like Diluc or Keqing unless you just really like them, or you want to gamble for a shot at a five-star weapon. In fact, Genshin Impact may be the least intrusive gacha game I’ve ever played. You aren’t prompted to, or even eligible to buy the $10 Battle Pass until you hit rank 20, which will take you a solid 10 hours or more of gameplay (unless you’re me, where it took more like 40 because sidequesting and map exploration are a horrible addiction.)

If you aren’t sure whether or not you’ll like Genshin Impact, you’ll need to understand what the game actually is. It’s an RPG in the sense that you’ll assume the role of a main character known as The Traveler, and you’ll play out their adventure under the assumption that you are at the helm of the mast. The characters don’t get stat points that you can freely level, but instead they have a constellation of skills that levels up each time you draw a duplicate of a character from the Wish system (aka Pulls), or you complete a quest that grants one of these items that lets you purchase a point as a reward.

Unfortunately, there’s no control over this system which means you’ll simply unlock each skill in order which makes customization of characters a bit limited, but to make up for that, you can equip each character with a weapon and five different artifacts (accessories) that grant stat bonuses as well as set bonuses depending on how much of the set you are wearing. You want to make someone with high crit damage? Give them four pieces of Berserker gear. Prefer to do more damage with your elemental skills on someone like Lisa who’s an Electro mage? Equip Thundering Fury gear. The set bonuses are easy to read and find, and the adventurer’s log will allow you to sort by set so you can find what you’re looking for without too much stressing.

Combat consists of taking a four party team out into the world, and in order to have success, you’ll want to make sure your team is balanced for the possible situations you may encounter. It’s always handy to have a DPS, a healer, a support character (preferably of the same element as your DPS), and typically The Traveler as your fourth for access to wind/earth abilities as they have niche uses throughout the overworld. There are already plenty of great resources available, such as this one to learn more about character builds and teams.

As you continue the path along the main story, you’ll hit snags in the road that limit your progression - typically your rank will stop you from moving the main storyline, but thankfully there are a ton of sidequests to do, treasure chests to find and open (these grant exp toward your rank), dungeons to run, and even multiplayer that unlocks at rank 16. I haven’t really found the multiplayer to be too engaging thus far, but I wouldn’t typically look to play a game like this with other people.. Genshin Impact feels like a single player RPG that requires an internet connection (which makes sense as it’s available on phones) and offers a few connectivity options but none that are seemingly required. 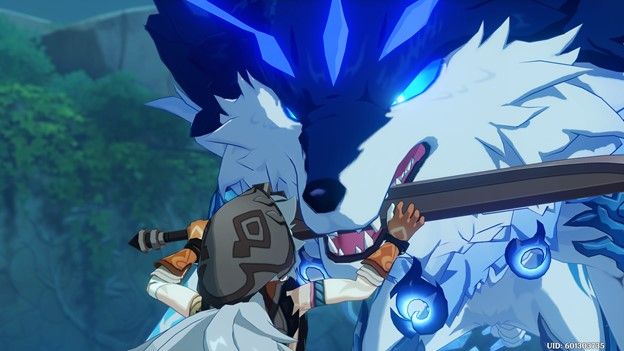 The other other thing that will stall your progression is a component called resin, which recharges very slowly. Original resin recharges at one resin every eight minutes, this means it takes 16 hours to recharge to the full 120 resin. As it requires resin to open Ley Line Blossoms, Outcrops, or run dungeons to farm components, you’ll eventually hit the wall where you have to decide if you want to be patient or pony up some cash to keep going. Thankfully, this doesn’t really come into play until you’ve completed all of the current content available until the next big patch, but for the hardcore who want the absolute best teams to show off online, you’ll need to buy resin recharges to farm harder than what’s naturally allowed. Resin is basically the energy system you’d normally find in most mobile games, but here you don’t have to spend Resin to do everything - just things that would require repeating.

There is also a Battle Pass that opens up at level 20, which gives you a set amount of rewards as you level it up, similar to playing games in Fortnite, Apex Legends, or Call of Duty. Buying the $10 Battle Pass grants you a second Battle Pass called Gnostic Hymns. It’s basically the same as the premium battle pass in those previously mentioned games, but instead of cosmetics or skin colors, you’ll get more items to level your characters or free Wishes.

For me, spending money on a free to play game should be to reward the developers and not at all tied to progress/character ability. These rewards are still attainable from doing other quests, but the Battle Pass makes their rarity less scarce. Those shooters do it better since those rewards are mostly cosmetic and don’t impact gameplay, something I wish Genshin had done instead of giving rewards of character experience and crafting components. 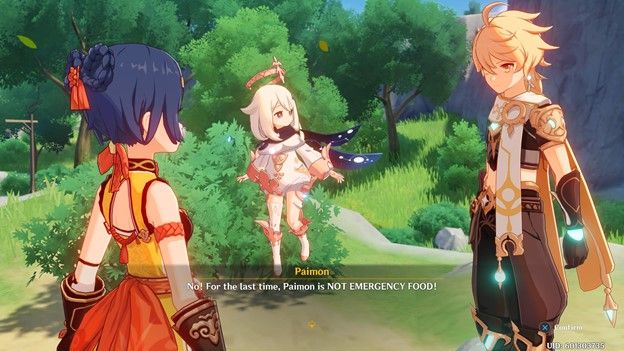 Overall, in spite of things that should bring Genshin Impact down, the game is so much fun to play that the negatives are ultimately minor gripes. While the story is mostly adequate at best (and there are some points where the dialogue unintentionally assumes you’re playing the male Traveler), the side quest stories help deliver a little more feeling and charm where the main quests lack (my favorites so far have been Razor and Diluc’s side stories.) The open world is bright, vibrant, and full of life and color, which makes this game a joy to look at whether you’re playing or watching. Camps of enemies feel like they were just living their best lives before you dropped in to interrupt them, which is a wild breath of fresh air, or something like that in comparison to that other game that is often compared to Genshin Impact.

The art style is a beautiful almost watercolor aesthetic, with an intent focus on making sure every ounce of color pops among the gray mountain sides. A splash of orange leaves work to show the natural changing of the seasons as you explore the world, giving the illusion of changing seasons moving from one area to the next. Vibrant colors accompany the element they represent as well, whether it be the light green of Aenmo (air) or the gold that signifies Geo (earth) you always have a solid visual indicator of what type of element you’re up against. Accompanying the art is a terrific orchestral mix of cheerful and upbeat music in the town areas, while boss encounters such as the one with Andrius starts off with a tickling piano and builds into a triumphant chorus that adds a punch to an already hectic fight.

The gameplay is smooth and simplistic, and it works great on all platforms - though I’m still not sure why the PlayStation version can’t be linked to a Mihoyo account so I could play on my phone when I’m not at home (PS Vita version please??) but it’s a small gripe to an otherwise terrific game. If the loading times were a bit better, I’d recommend the PlayStation version a little more, but for now, mobile/PC are the optimal platforms.