In my earlier Galactic Civilizations IV Review in Progress article, I went over my first impressions of the game, noting a concern that certain elements were making the game feel like a mediocre experience. Unfortunately, now with more playtime under my belt, I can confirm that the game doesn’t hook me with the feeling I want to have when playing a 4x game, that feeling of needing to take just one more turn.

Out of the gate, Galactic Civilizations IV has a good initial impression. While the game has no interactive tutorial, which would help new players, there are a few elements to help guide you during the early game. Advisors provide a player with suggestions on what they could do next and tactical advice on what to build/research. A pop-up robot AI gives information about new systems as they appear. I didn’t find these aids useful since I had already looked online for information after my first session with the game due to the lack of clear information in the UI. But mileage may vary depending on the player.

There are 18 base races to choose from. Picking one that sounds interesting and jumping into a game is easy. Personally, after playing a custom race, it is, in my opinion, the way to go unless you are just looking to challenge yourself. I can tailor a race to my preferred playstyle and give myself a good jump on colonizing planets. For players interested in doing backstory and custom art, both are also options when making a custom race. I found what was easiest for me was to copy an existing race and modify it to my liking. 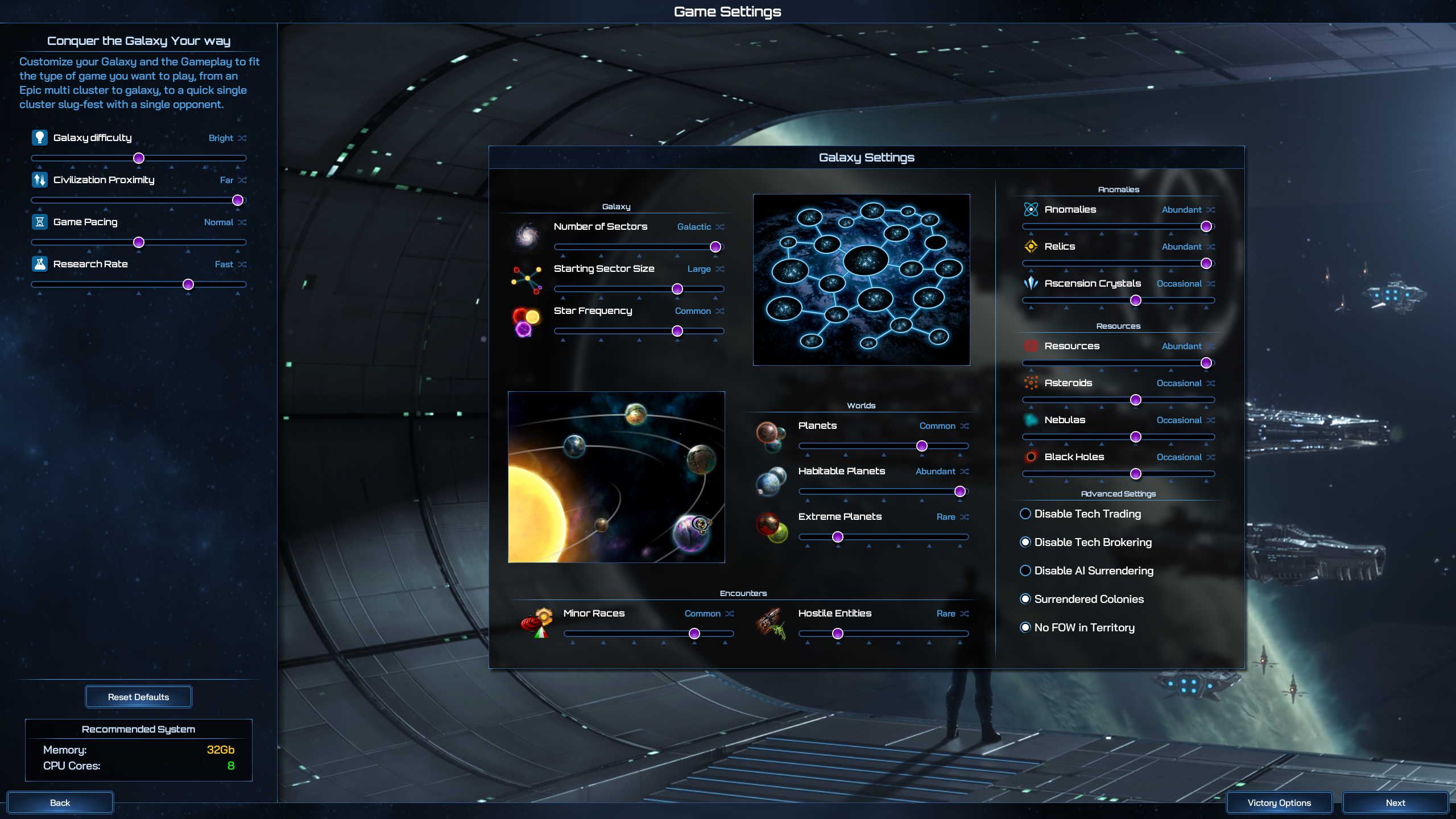 The options for galaxy map generation are also excellent. The various sliders allow me to determine everything from the number of systems to how often habitable planets would appear. During my first few games, I had a problem with encountering other races too quickly. Eventually, I made the map as large as possible and placed other races on the farthest setting. Be aware, that the map settings increase your recommended system memory up to 32 gigs of ram and use up to 8 cores.

The larger map did allow me to get comfortable with my little corner of the galaxy before I encountered two other races. Make no mistake that it is still a land rush for the first part of the game. Conquering core planets in the late game can be a chore as fleets build up.

I still need to tinker more with the map settings to fit the style of game I enjoy playing, especially if I will be playing multiplayer much in the future. The only downside to all these initial game creation options is that I didn’t see much shift in the difficulty. I have tried easy, normal, and bright so far. The AI doesn’t seem to improve much except maybe when it comes to diplomacy. Races seem to declare war more quickly, and enemy ships/creatures seem more powerful. But it was nothing insurmountable.

I didn't find going to war with other races in Galactic Civilizations IV an enjoyable experience. It bogs down the gameplay as you chase AI ships that seem to randomly attack different planets. I found the AI at times to be questionable as I have tried playing a high diplomacy race and still had some friendly factions suddenly declare war even though I had a high reputation rating.

When playing on the bright difficulty, it seemed like another AI race used deception to turn an ally against me in one instance. I was initially impressed. But then the same ally took an action that made no sense a few turns later, even if deception was used again. It left me confused. 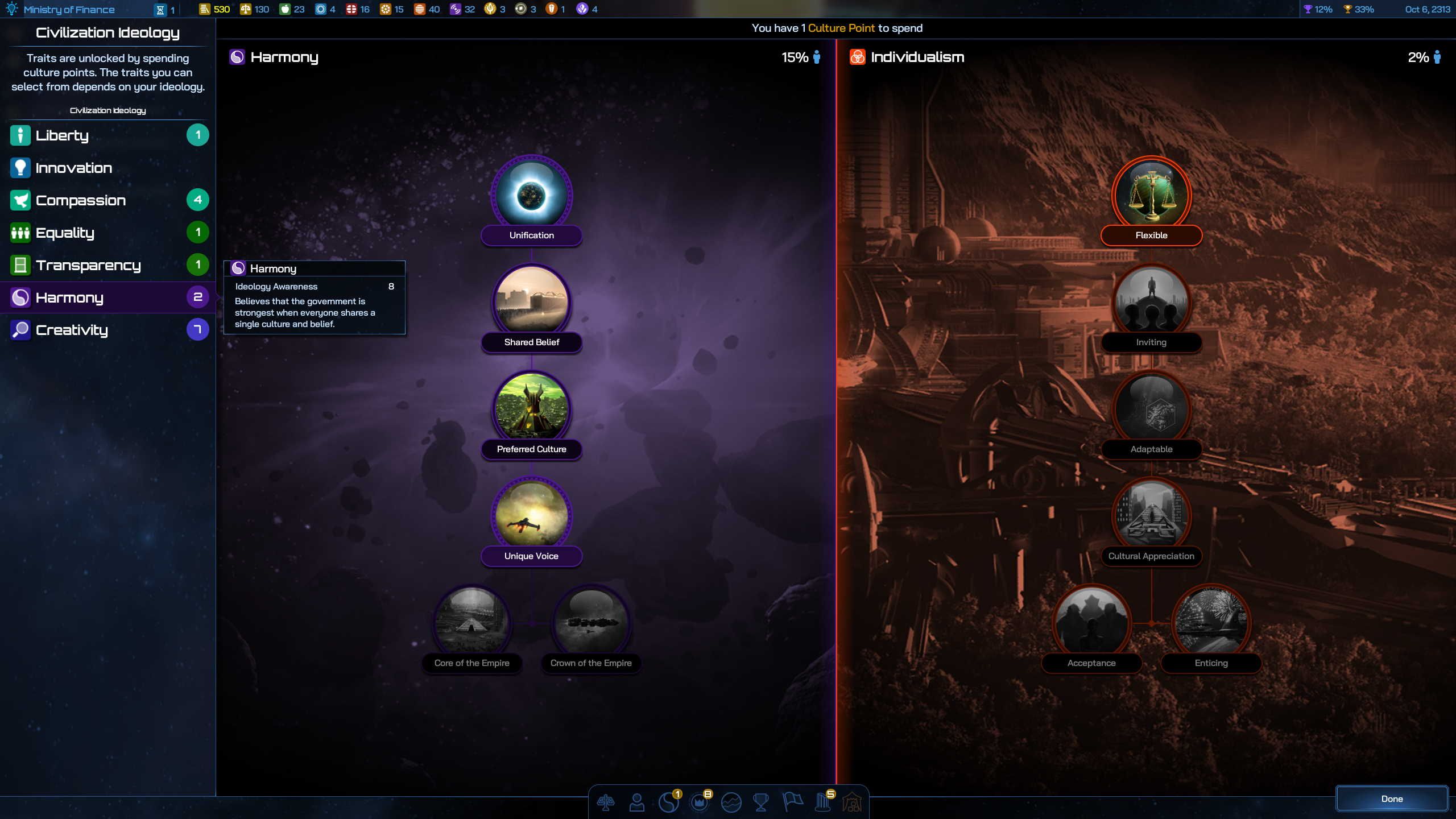 Another element I was concerned about is in-game events. They didn’t feel impactful during the early game, and this continued as I expanded my empire. Events did allow me to tailor my race’s ideology progression to a degree. For this system, my choices determined what kind of society I was running and the bonuses I received because of it. But other than for a bit of story text, the events do feel tacked on with only a few reward options. When scanning anomalies you could also unlock quests to complete that changed up the gameplay a bit, but they lacked variety and typically involved recovering X number of artifacts/resources. 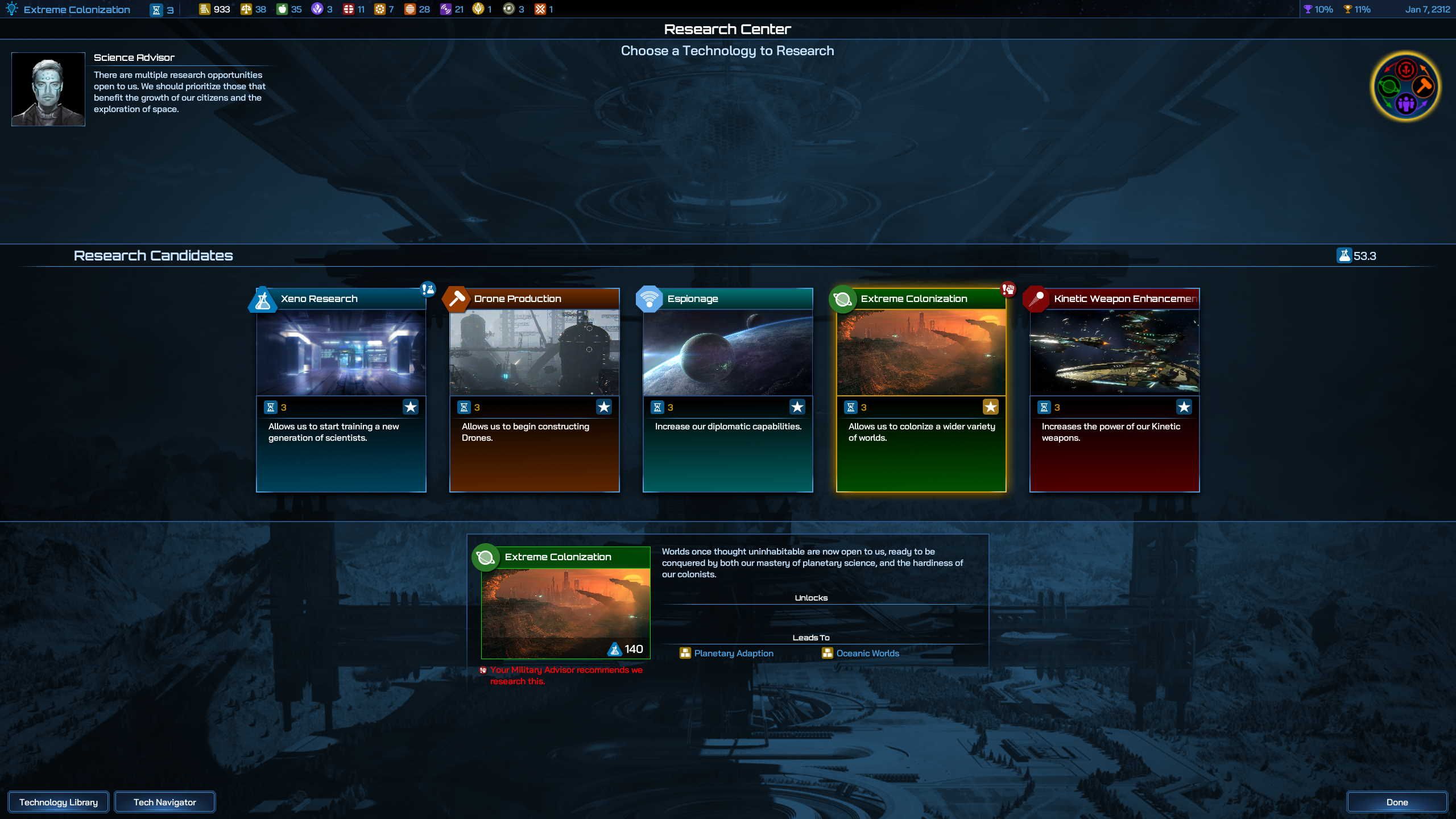 I also do not like only having 4/5 randomly selected options to pick from after having researched a technology. I prefer having more player agency in a game like this because I tend to plan far ahead. Some players may enjoy the RNG element, and the developer did include an option to reshuffle your available technologies to research. When this option is selected, however, it adds 10% to the research time.

One system I was looking forward to is using slipstreams to travel between regions. After having played more, I am not sure if this form of fast travel adds much to the game compared to just having a single large map. The various races can unlock the technology quickly through research with a bit of luck. I am also still playing with ways to blockade a slipstream entry point, but the AI seems to ignore anything I have set up so far.

I did eventually get used to shifting quickly between a zoomed-in view of space and then quickly scrolling back out to where I could see all the various icons on the map. Eventually, I started spending most of my time scrolled out so I can easily identify resources/planets. It was also easier to see enemy ships encroaching on my territory. This is unfortunate since the graphics in Galactic Civilizations IV are decent and when combined with the music quite a nice experience.

The developers have added a few things that make gameplay more enjoyable. First, automating probes and scout ships is wonderful. I can just let them go while I focus on building out my area of control. Second, the use of a core world to manage a system, while nearby colonies feed their resources into one planet, is a great addition. I do think the citizen happiness system may need to be adjusted. I mostly ignored this aspect of the game with minimal effects so far.

The use of civilizations policies was a nice change. I could pick what bonus my civilization focused on as I unlocked more technologies. Once I slotted in a new one though, I promptly forgot about it until I unlocked the next slot, and then the system prompted me to fill it. 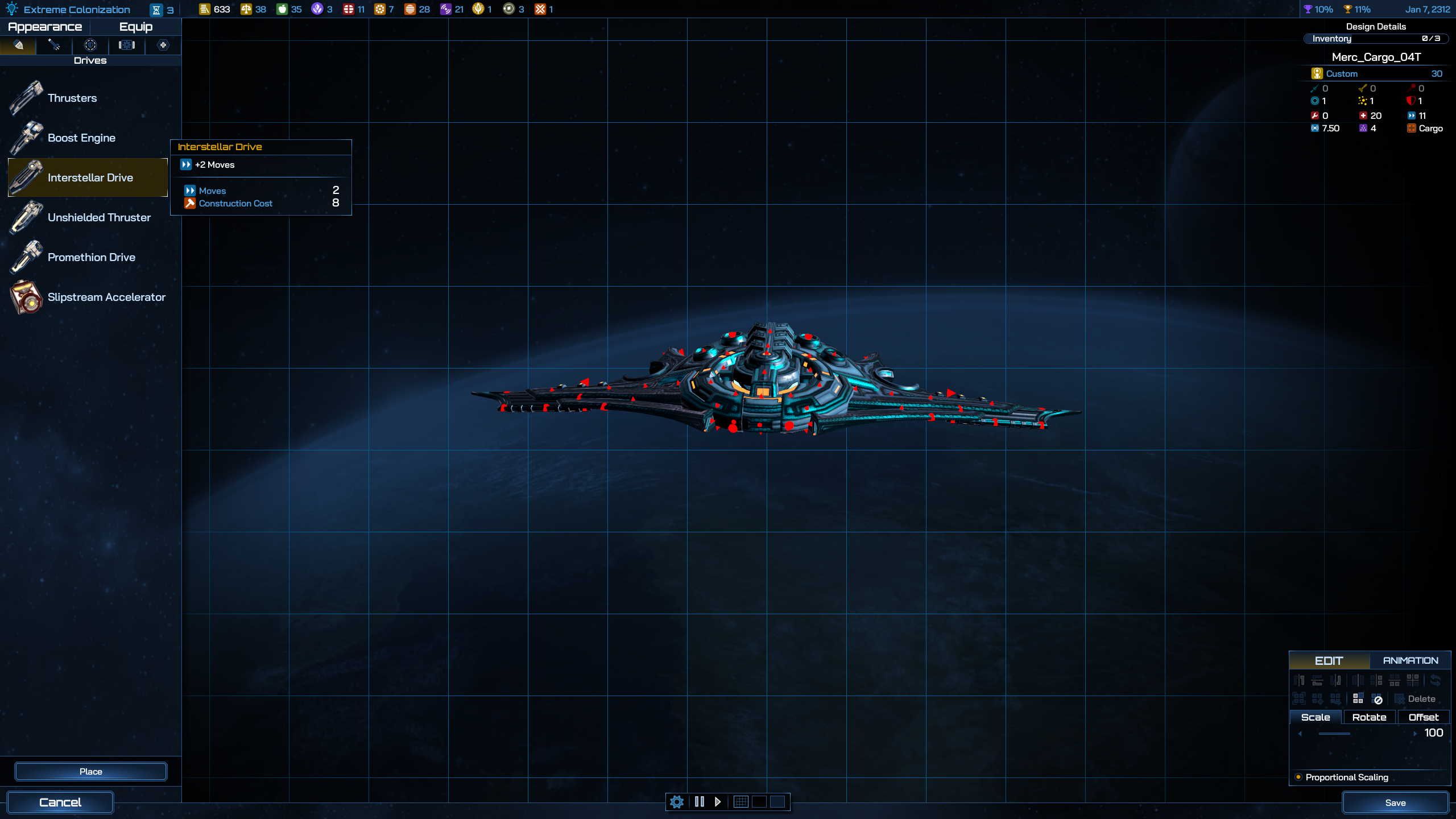 Custom shipbuilding is also a great system. If you want to design new ships as efficiently as possible and change up their appearance in different ways there are a lot of options. It is not something I would do often unless I was making a ship with a specific purpose. But I could see friends who would spend hours getting their fleet set up just right.

Stardock has created a game with good bones. Some of the new systems, such as the core world management and ideology system, add to/improve the game. Unfortunately, other systems feel tedious at times. They are not broken per se but are not quite there yet. They either bog down the gameplay or lack impact on the experience. The core gameplay loop is decent, but it just didn’t hook me into feeling the need to play one more turn before bed. If you enjoy the series, Galactic Civilizations IV is worth picking up. Otherwise, I would wait for a few patches or DLC to help flesh out some of the systems.

A copy of the game was provided for the purpose of review.