I have been looking forward to Diablo II: Resurrected ever since it was announced because it was the one game in the Diablo series I had missed. I know Diablo II has been playable for the last 20 years on PC, but I also tend to have a hard time playing old games due to lower quality graphics and outdated mechanics. These things didn’t bother me when they were current, but at this point, they feel archaic. I also enjoyed playing Diablo III on the Switch, so I jumped at the opportunity to play D2R on PS5. The team did a brilliant job updating everything and still keeping the core experience of Diablo II intact, which is easy to compare because D2R also comes with a classic mode which strips away a lot of the updates.

Anyone who read my review in progress a couple of weeks ago knows that I ended up going with Paladin for my first character, which was a hard choice for me. I have also messed around with the Amazon and Assassin a bit, which were fun, but I generally liked the feel of Paladin more. Having a diverse set of auras to switch between for different situations added a bit more control and variety than I experienced in my short time with the other classes. Both Assassin and Amazon felt quite capable; Paladin fits my style of play in dungeon crawlers a bit better. However, it does feel like being a ranged character would be more advantageous because many ranged attacks, especially early in the game, can be dodged just by stepping to the side. Nonetheless, I persisted with melee.

One thing I was initially surprised about was D2R felt a good bit easier than I expected. I’d heard for years how unforgiving Diablo II was, and I expected it would be grueling from the beginning. However, early on, it was effortless, which in hindsight was probably a good thing. I killed things without much effort right from the start, but because I didn’t have to focus on staying alive, I noticed more of the basic mechanics and what to look out for than I probably would have otherwise. For example, it might have taken me longer to realize the Shaman resurrected some of their cohorts if I was more focused on surviving. 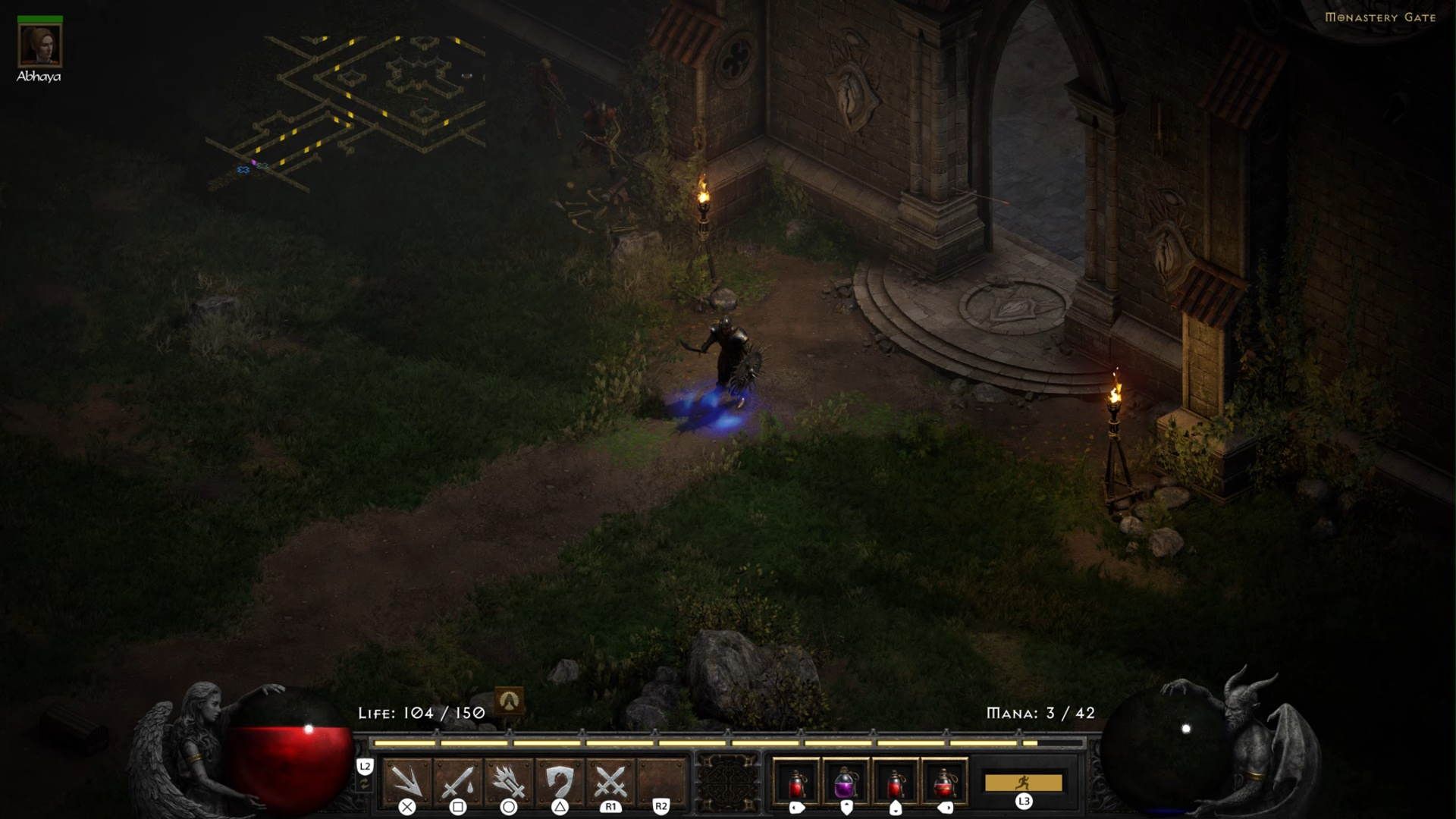 It’s funny because, looking back, I was a little disappointed in the ease of just tearing through everything and was beginning to think I’d have to change difficulties to see any real challenge. That is until I made it to the Rogue Monastery in Act 1. That place is a significant step up in difficulty, and I wasn’t at all expecting that. Part of the reason for this was that I went there a bit more quickly than I should have because I accidentally skipped a quest. However, even after going back after leveling a bit, it was still difficult to clear out. It was a ton of fun, but I would say from that point onward, the difficulty kept going up consistently.

Related to the increasing difficulty, the quick action menu for the console was beneficial as it allowed me to switch things up quickly. My attacks were always on the primary set of buttons, though I HIGHLY recommend rebinding the basic attack to something other than X. That is unless you enjoy picking up every single thing and constantly hearing your character complain about being out of inventory space. Also, leaving it bound to X caused issues anytime I was fighting near anything interactable. In addition to the primary set of keybinds, L2 was also used as a modifier key and allowed an entire secondary of keybinds for abilities. I mostly used my L2 binds for the auras so I could quickly switch between them. I also kept town scrolls on an L2 button for quick dropping when I thought I might die.

Death is fairly punishing but not overly so unless, of course, you are playing on Hardcore, where a character who dies is done with their journey. When I died for the first time, I found that everything I was wearing and all my gold was dropped where I died, and I’d have to return to that spot to collect everything. This was slightly problematic because where I died was often crawling with mobs. That said, the first obstacle was just getting back to where everything was in the first place. Most of the time, this meant running through areas I’d already cleared, so it was an easy task; it just took a while. Occasionally though, I’d find myself trying to make my way unarmed through lots of mobs. This is why I started preemptively dropping town portals everywhere, basically as a time-saving device. I did try keeping an extra set of essential gear in my stash to ease getting my stuff back, but I found that often made it harder to pick my gear back up (because since I had other things equipped, everything would try to go into my inventory). So generally, I just ran back without things and frantically tried to pick up stuff as quickly as possible.

As much as I have enjoyed my time with D2R, two main areas have been frustrating. The first and lesser issue is everything has collision. This goes for both mobs and even tiny pebbles on the ground. There were so many times when I’d be running around suddenly be blocked by a small thing on the map I really should have been able to step over. As frustrating as this was at times, it was also helpful because everything I was fighting generally followed the same set of rules. As a result, a valid strategy when there were just too many mobs was kiting everything around and letting my mercenary kill them off. Since the mobs also had to go around things, I could use that to my advantage with their pathing.

The second issue is more of a modern lifestyle issue: Diablo II: Resurrected isn’t a great hop-in and out quickly game. The zones and floors would change every session, even if I had previously explored them fully. This is great for repeated plays but makes it harder to just hop in for a short session because I never knew how long it would take me to clear an area and get to the next waypoint. Thankfully, there is a list for each act that told me precisely what zones and floors would have waypoints; that was a huge help. Judging how long to the next one was often murky at best, though.

When it comes to server stability issues, I’ve had good luck with it in general. Outside of when Blizzard took things down for emergency maintenance, I haven’t seen most of the issues others reported. It’s possible that playing on the PS5 has, in some ways, insulated me a bit from most of the issues. I have seen two reoccurring things, which are a bit frustrating.

I have sort of experienced the character not being found and not being able to login. I say sort of because it only occurs when I try to use the PS5 suspend feature. For anyone who isn’t aware of this feature, it essentially allows players to put the PS5 to sleep while still in a game and then come back and pick up right where you left off. When I tried this while in a town, D2R couldn’t reconnect to the servers at all. I would get errors instead. When I tried doing this from the character select screen when I came back, D2R would always act as if I had no characters created. The fix for both issues was to go to the PS5 menu screen and completely close the game down. Then when I relaunched, everything worked as it should. 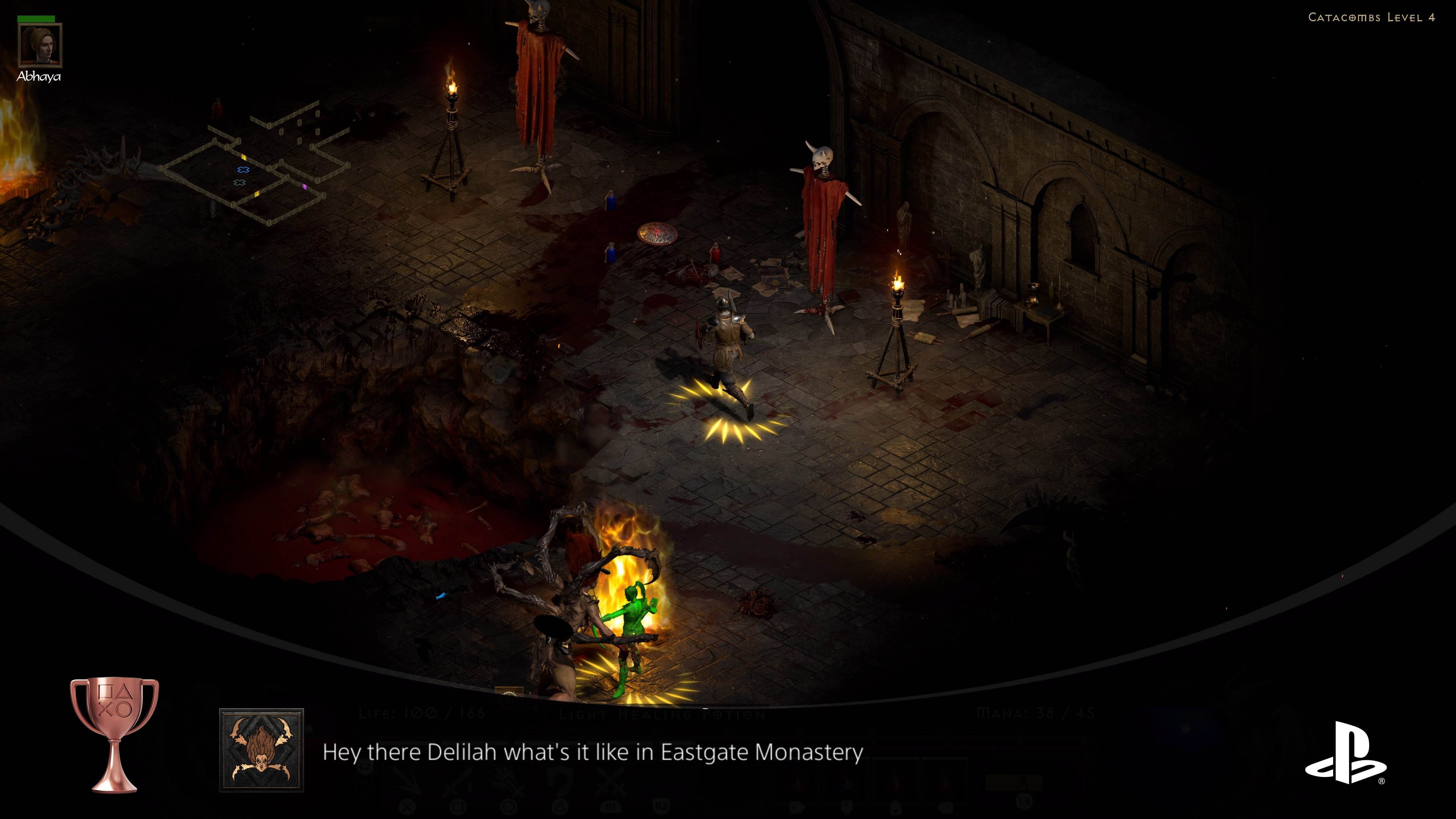 The other, and much more of an annoying issue, is that I have seen many server hiccups—those moments where I’d be running along and suddenly be blink back a few paces. Or mobs that had been right behind me would suddenly be in front of me. Not only did this occasionally make it harder to not die in certain situations, but it also caused a good amount of eye strain which made playing for extended periods difficult early on. Thankfully, although it does still occur, it happens nowhere near as much as it did when I first started playing. Hopefully, Blizzard will get this down to a rare occurrence soon.

I’ve enjoyed playing Diablo 2 Resurrected and getting to experience the story in a visually updated way. The tweaks they made to get everything working on the console also helped a lot as it gave me far more flexibility in what abilities I had at my disposal. D2R is ideal for anyone who likes dungeon crawlers and doesn’t want everything to be explained or to be told where to go all of the time.