I rode my bike east out into the Badlands as the sun was setting, golden hour bathing the Californian sky. I reached a slight incline and stopped as I disembarked. Turning west, I saw the immense skyline of Night City carved out along the horizon as the setting sun took up residence in all its ray traced glory. Moments like these continue to take my breath away in Cyberpunk 2077. This is truly a special game.

If you missed our review in progress, you can catch up here. I dove into the world of Cyberpunk 2077 and just how immersed I feel while playing. I also spent a good portion of the article discussing the bugs, the situation with the game at large, and my own largely bug-free experience. Several PC-specific options were also discussed along with my thoughts on the gunplay and audio design. Additionally, I published a deep dive of the ray tracing technology in Cyberpunk 2077. You can check out the video for that below.

As a quick reminder, I’m playing Cyberpunk 2077 on a fairly high-end PC equipped with an Intel i7 8700k and Nvidia RTX 3080 Founders Edition (courtesy of Nvidia). In this final review of the PC version, I’ll cover off my thoughts on the storytelling, characters, progression systems, skills, crafting, and then issue a final verdict.

Looking at the discourse across the internet, it’s clear that I had very different expectations regarding storytelling in Cyberpunk 2077. I simply was not expecting the same depth in story nor characters as Witcher 3 simply because CD Projekt RED stated that Cyberpunk 2077 would feature a shorter main story.

These are two totally different games and not once did I expect significant similarities between them. I really do believe this helped shape my excitement into something more pragmatic rather than one corroded by hype. As a result, I did expect complete immersion in a sprawling city, incredible detail, and outstanding graphics. As a bonus, I received some pretty amazing storytelling with truly great characters. I would be lying if I didn’t say Cyberpunk 2077 completely surpassed those expectations.

And now, having played nearly 60 hours, I’m surprised by just how deep the stories are in Cyberpunk 2077. While the main story in Witcher 3 was about another character who was important to Geralt, the story in Cyberpunk 2077 is more inward and is all about your character, V. 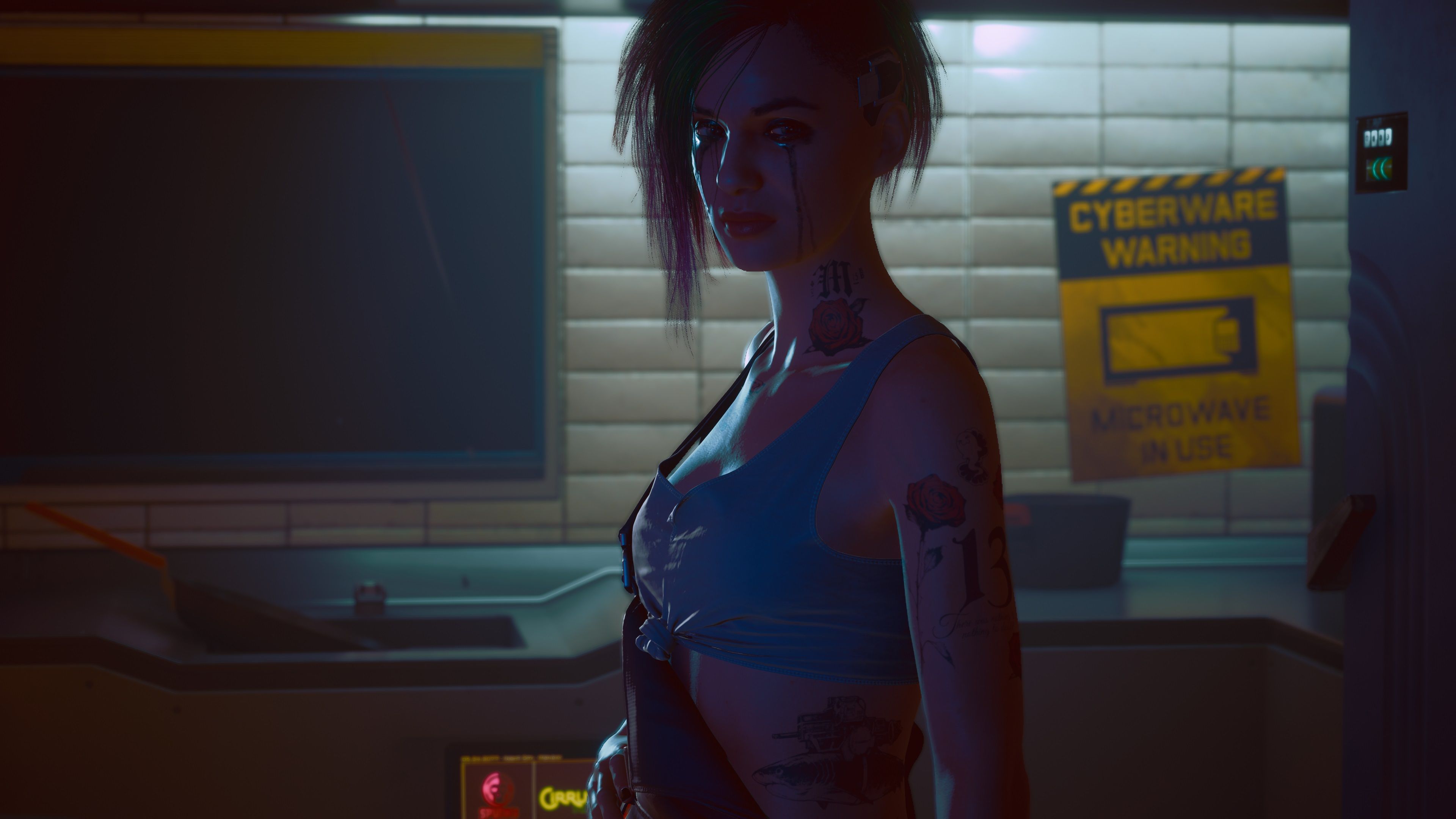 V isn’t shooting a gun, I am. V isn’t feeling pain, I am. V isn’t experiencing loss, I am. This personal connection with the story is played out brilliantly by V’s voice actor, Cherami Leigh. All the struggles, the pain, the joy, the exhilaration are brought to life with Leigh’s performance and only serve to enrich my connection with V. 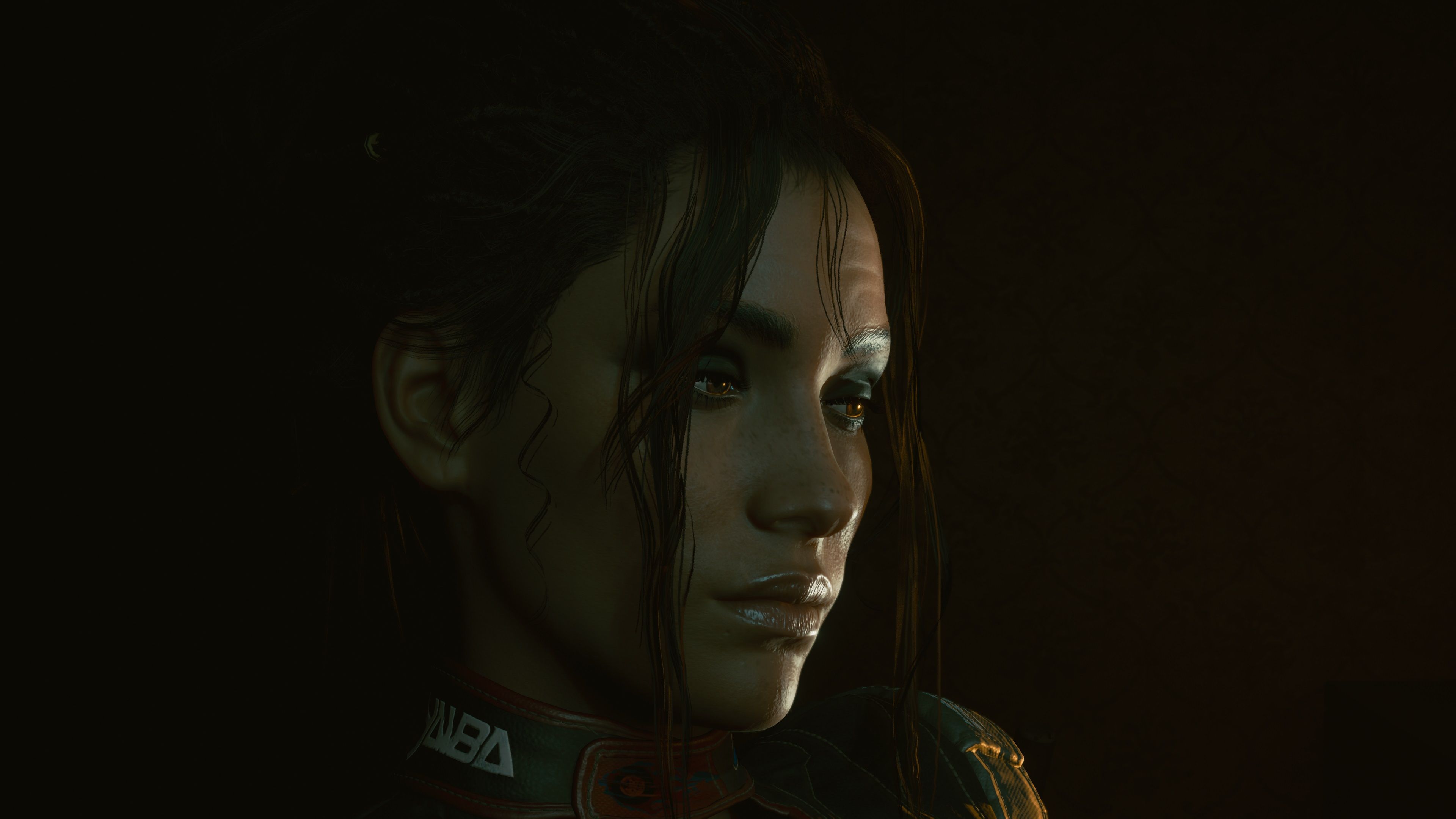 This depth of characterization extends to the secondary characters you meet during your time in Night City. Even here, I was continually surprised by how extensive the side quests were. Seemingly one-off side quests spawn entire quest lines which are not outwardly obvious. A lot these arrive to you in the form of calls you receive from fixers or other contacts. These requests might start small, like asking to meet in an apartment, but evolve in their progression into far more extensive character-building stories.

As with the player character, these secondary characters are all performed brilliantly. I came to know these characters as people and understood their struggles and fears. The writing here is top notch and is brought to life by the actors. I doff my cap to the entire cast.

Ultimately, I came away surprised by just how deep the stories and characters are in Cyberpunk 2077 given my initial expectations. While I didn’t go into the game expecting meaningful storytelling, I’m happy to see I was proven wrong.

Every time you level up in Cyberpunk 2077, you are awarded one Attribute point and one Perk point. Placing points into an Attribute levels it up. There are six Attributes, each with multiple skills within. Each skill has multiple perks. Additionally, each Skill has 20 levels of progression. You’ll unlock more benefits for a skill the more you use it.

For example, this is my Stealth skill tree under the Cool Attribute. You’ll notice that Perks for the Skills under an Attribute become available to you after you’ve reached a certain level for that Attribute. Additionally, you’ll note my current level for the Stealth skill along the bottom. This sounds a lot more convoluted than it actually is in practice. After a few levels, I found my way around the Attributes and Skills fairly easily. 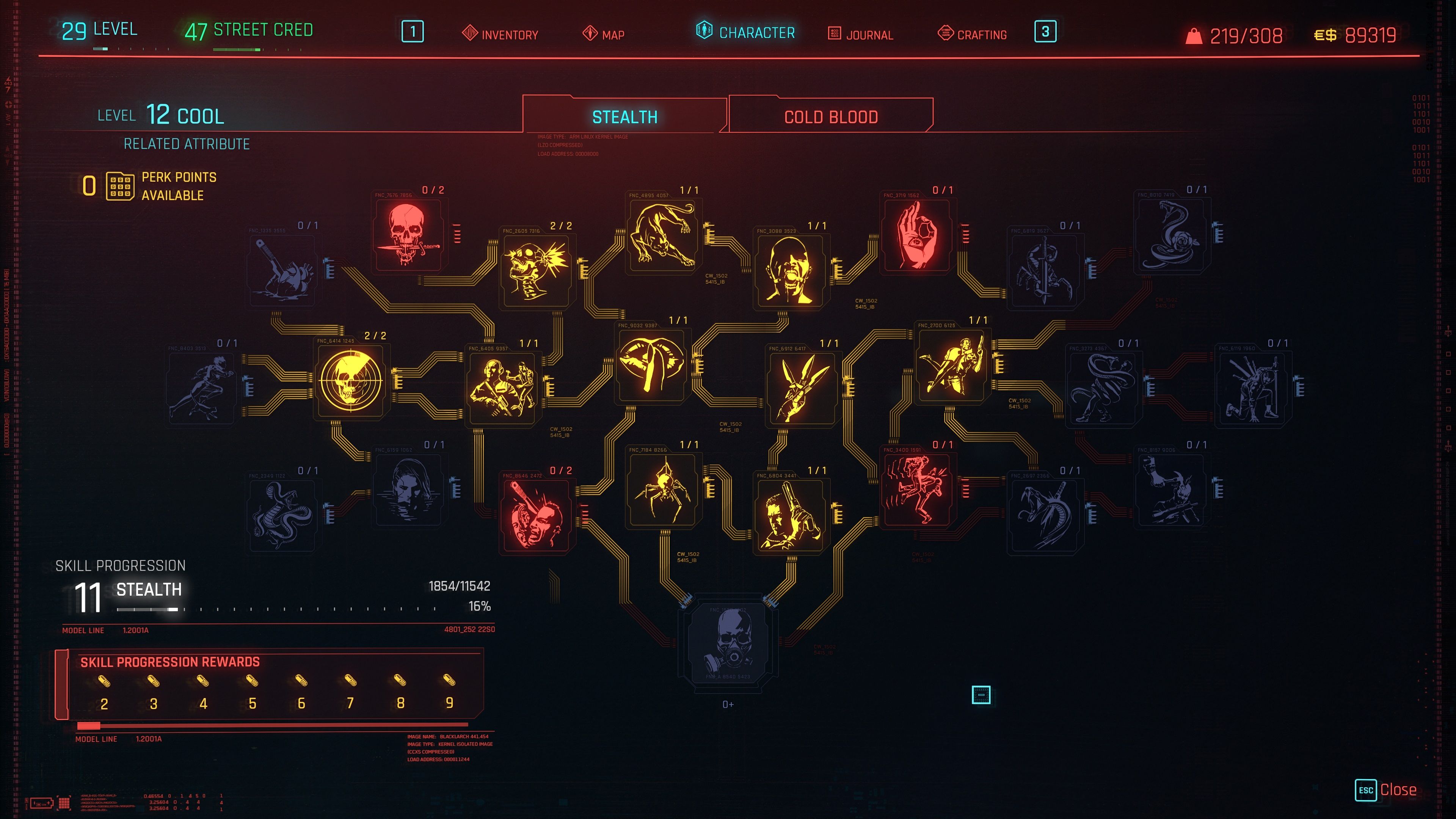 However, all this choice allows for some pretty good build diversity. I’m personally focusing on the Cool, Intelligence, and Reflexes Attributes. Within those Attributes, I’m further building out Stealth, Breach Protocol, Quick Hacking, and Blades.

Moreover, certain conversation options or certain actions like prying open doors will require you to have a minimum level with a certain Attribute. Even though I am focusing primarily on three Attributes, I’ve found it worthwhile to spend a few Attribute points to get the other Attributes to at least Level 6. This has allowed me unique dialogue in addition to helping me find alternate routes through buildings. The latter is supremely important to my stealth playstyle as it has enabled me to bypass several conflicts to outflank enemies.

Overall, my hacking and stealth build has paid serious dividends when paired with my silent katana. I love being able to approach a group of enemies unseen. These encounters always feel like a puzzle to me, allowing me to reason out a solution. This could involve me using Breach Protocol to perhaps disable cameras and turrets, while also allowing my Quick Hacks to cost fewer RAM resources.

Upon installing this Breach Protocol, I can then use my Reboot Optics quick hack to temporarily blind an enemy to either sneak past, or to choke them out and hide their body. Alternatively, should I be discovered, I could use my Weapon Glitch quick hack to jam an enemy’s weapon, allowing me time to run away. This flexibility is afforded by the Attributes, Skill, and Perks system in Cyberpunk 2077 and is something I really do appreciate.

While I’ve found most of the skills to have benefits for most playstyles, Crafting is the exception. In short, it’s utterly useless in addition to initially breaking saves on PC. While this issue has now been fixed, it’s still insane that the game released with this issue present. I initially started crafting but often times found far more useful weapons and gear in the world whether delivered through various quests and activities, or by simply exploring.

I don’t often craft in games unless there are gear sets, and Cyberpunk 2077 doesn’t appear to have any permanent gear sets apart from iconic weapons. There are certain suits you’ll receive for specific missions, but these aren’t your traditional full gear sets which come to mind when one thinks of RPG gear sets. 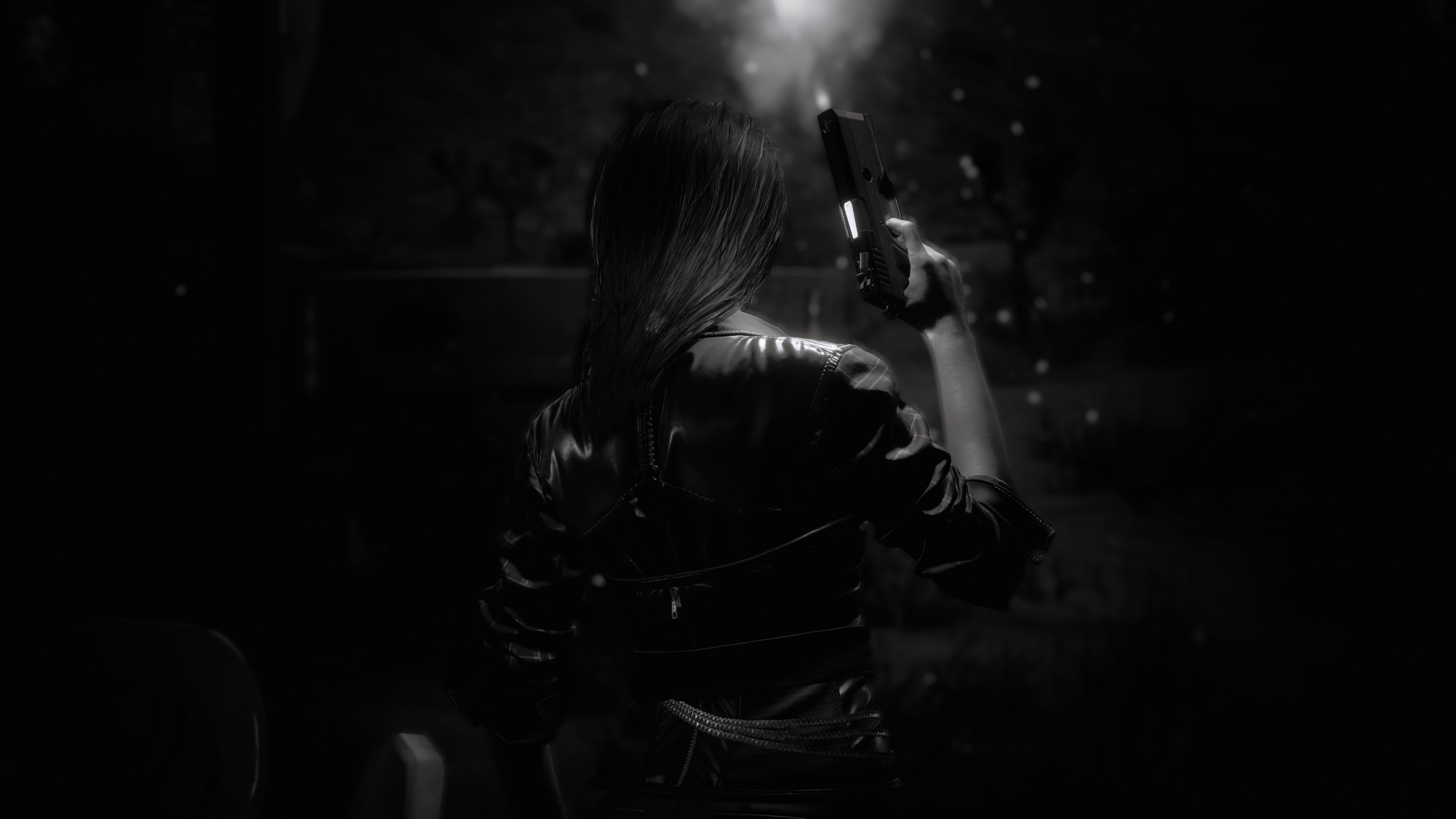 Instead, Cyberpunk appears to have a focus on individual pieces of clothing rather than distinct sets. Unlike Witcher 3 where I felt compelled and excited to chase after gear sets for a certain look and benefits, I didn’t bother with crafting in Cyberpunk 2077.

The lack of gear sets makes sense to a degree given the setting. However, if you’re a min/max player, you’ll end up with disparate mismatched clothing without any cohesion between them just to chase better armor ratings. This can break immersion and look out of place even for the eccentric world of Cyberpunk 2077.

Again, the subpar crafting didn’t really bother me, but I can absolutely see how it could disappoint others who consider themselves crafters.

As I mentioned in my Review In Progress, my experience has been almost entirely bug-free. I have actively been on the lookout for some of the more egregious issues people have reported across PC and console, but the blunt truth is that I simply have not encountered them.

The saga of Cyberpunk 2077 is well-documented from the mandatory crunch, lying about the state of the game on now-last-gen consoles, launch woes (especially on console), epilepsy triggers, the gross miscommunication regarding refunds, and more.

While I acknowledge the state of the game at large, I can still only review my personal experience. To not do so would be disingenuous not only to me, but also to those of you reading this review. I cannot review what I have not experienced. Moreover, I cannot and will not write something to validate the opinion of others simply to appease them. To do so would be a lie.

From my Review in Progress, I am continually amazed by the sheer density of detail in every street and every alley of Night City. The world designers deserve all the praise for their incredible work. The audio design is truly exemplary as it convinces me I’m in an actual city. At the same time, the subpar PC key bindings and grossly lacking accessibility options are shameful for a game releasing in 2020. The fact that crafting, arguably meant to be a core feature of the game, is entirely useless will no doubt frustrate those who consider themselves crafters.

Cyberpunk 2077 is not perfect. But the fact is, it doesn’t need to be to completely surpass my expectations. Given my experience and placing that against my expectations, I can unequivocally say that Cyberpunk 2077 is one of the greatest games I have ever played. The brilliant world, outstanding level design, seemingly endless density of detail paired with exceptional performances in incredibly engaging stories, all backed by truly groundbreaking graphics technology combine to create a supremely exceptional experience.

The developers – the ones actually designing, writing, scripting, testing, and creating the game – deserve insurmountable praise for what they accomplished under the environment they were working. I have never experienced anything even remotely close to this before. I truly believe Cyberpunk 2077 is nothing short of amazing.

Disclosure: Code was provided by the publisher for purposes of this review.