Starting Development in early 2015, Crowfall has been touted as the Throne War MMO for PVP players. With 6 years of development, Crowfall was finally released on July 6th, 2021. Having played through the last preview event and now for almost three weeks, it’s time to wrap up my experience in this PVP-centric MMO and share my thoughts. Does it hold up as the self-proclaimed throne war MMO PVP’ers have been waiting for? Grab that coffee, kick back and check out our final review of ArtCraft Entertainments Crowfall.

First Impressions Are Not Always Lasting

In my original impressions piece in June, I highlighted a few things I liked and disliked about “Crowfall” at the time. Interestingly, since that original article I’ve found myself shifting my opinion on several of the points I made during that initial playtest. In fact, much of my opinion on Crowfall as a title has moved from cautiously optimistic to sadly disappointed.

To begin, Crowfall takes a bit of a confusing approach to progression mechanics. The first 27-30 levels of the game are really just a glorified tutorial. The game quickly runs you through basic mechanics like crafting, combat and PVP all within the safety of the starter realms. Within that small contained space progression feels well balanced even if things do clip along at a speedy pace. This tutorial time took about 7-10 hours total (I ran it a couple of times).

However, that feeling of balanced progression quickly fades once you’ve finished the ‘tutorial area’. Once the game nudges you out into the world, progression becomes a slog of endless grinding for materials in order to build up a guild or faction base. Gathering itself is a slow process as well, requiring an irritating minigame of monitoring a stamina bar while chopping or mining. It’s a frustrating system that made me dread gathering whenever I logged in to play.

Even the levelling experience after 30 (level 30 is a soft cap) becomes a ridiculous grind of gold and materials to level up a vessel. A vessel can be upgraded or levelled five more times leaving you with a hard level cap of 35. Unfortunately, this process isn’t explained well and so you’ll spend a lot of time scouring the internet for information on how to go about levelling. 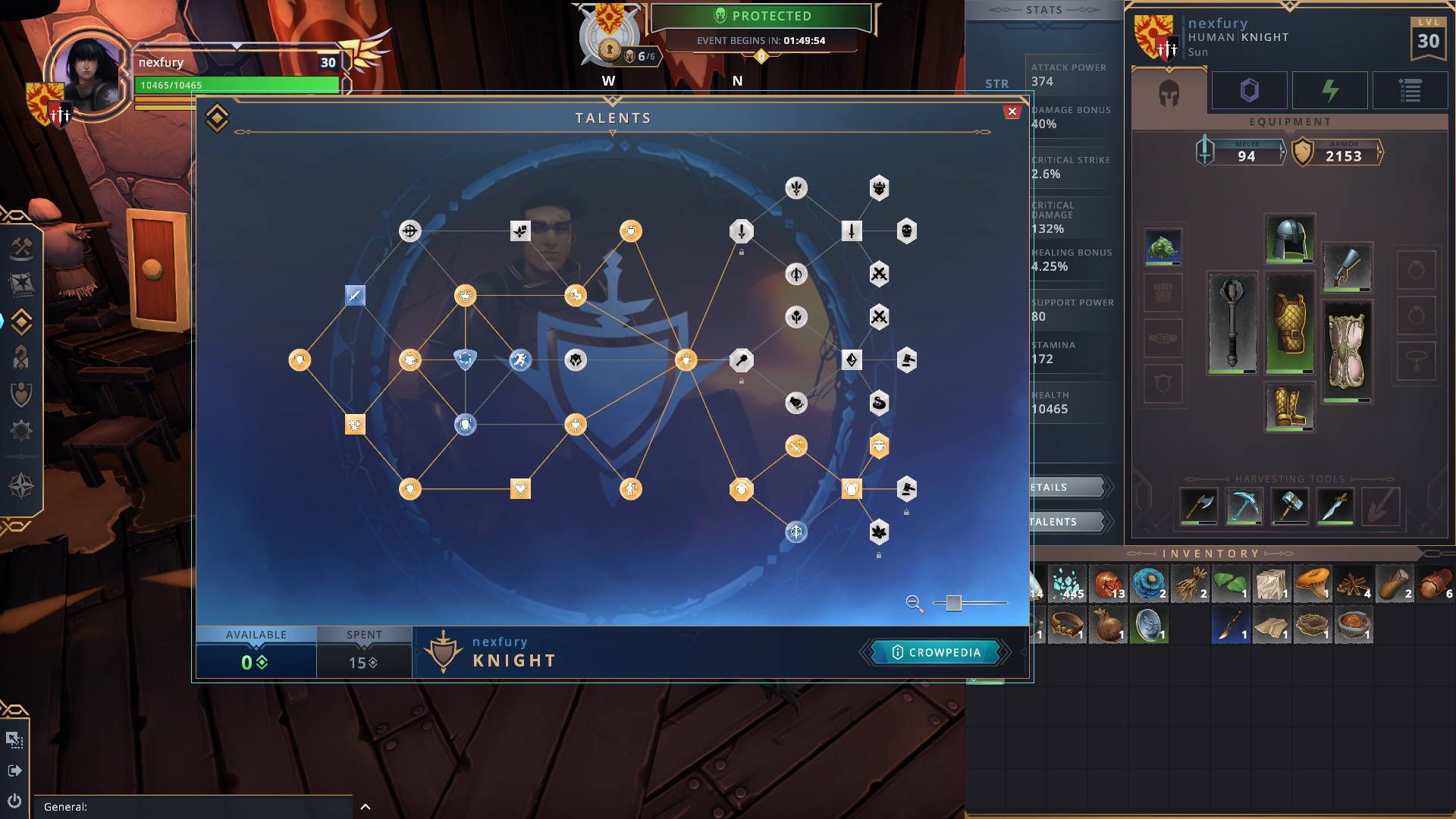 The visuals in Crowfall are, unfortunately, a mixed bag. While I do appreciate the art style that ArtCraft has chosen to go with, and it’s stylized enough to stand out in the crowded MMO market, it really isn’t all that visually stunning. On the one hand, aspects like the creative designs of each of the individual races do go a long way to making Crowfall look unique. They stand out and feel interesting.

I would also be concerned about frame rates as more and more players populated a map for large-scale PVP. I didn’t experience a lot of the large-scale guild vs guild PVP as it was difficult to find large groups to play with. I did note some frame rate spikes throughout my multiple playtimes however. Most of which occurred when I was engaging in combat with four or more players or NPC’s. It got to the point that I came to expect the FPS drops knowing they were going to be present during these encounters. With this being my experience in a smaller PVP setting I really can’t imagine a large-scale PVP match holding up well. 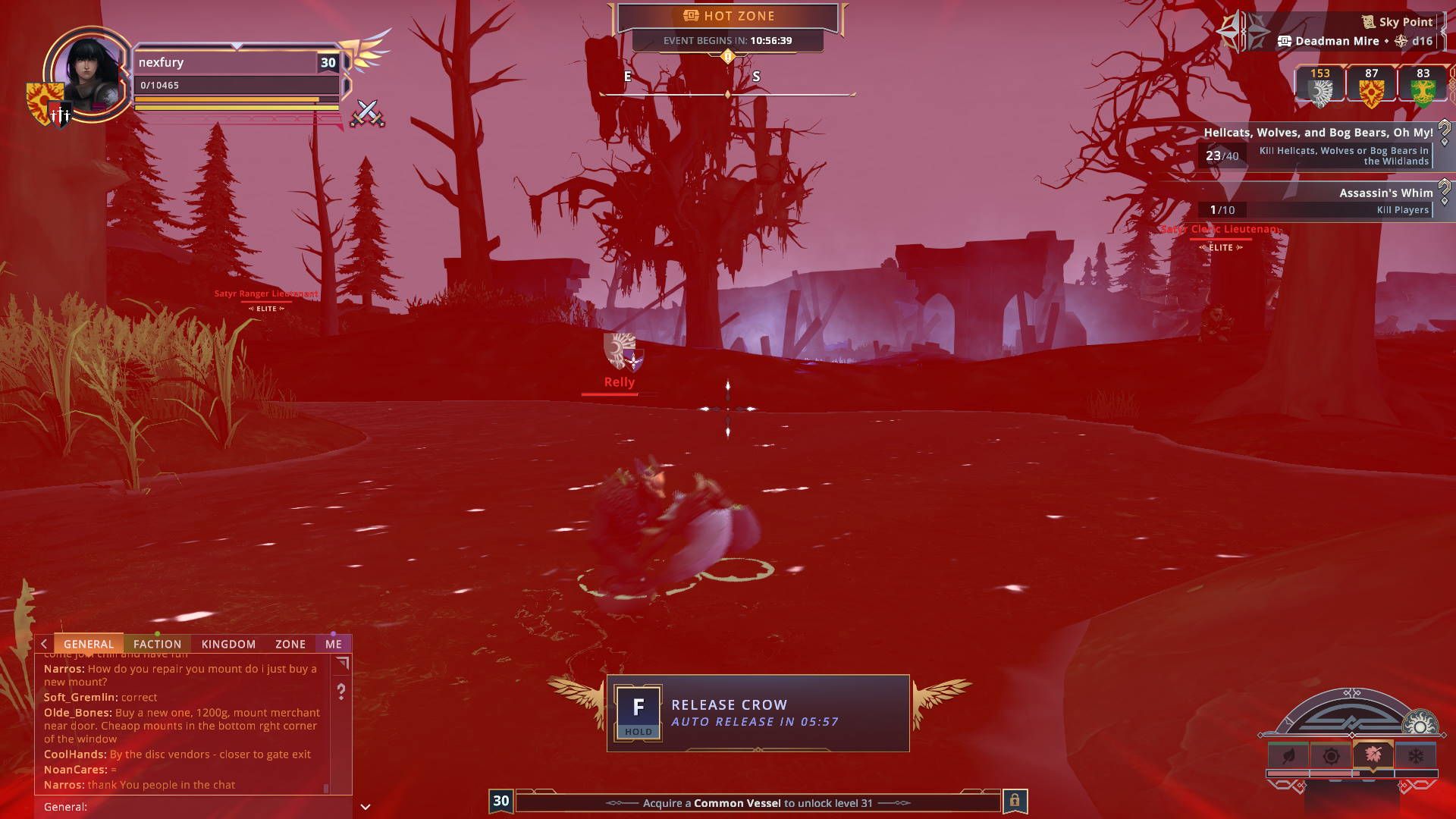 Crafting is another area that I had initially shared some concerns about. Specifically, I was worried that crafting was unbalanced with certain low-level items requiring an abnormal amount of materials. This unfortunately was only exasperated the more time I spent learning and using the crafting system.

Farming materials for crafting isn’t a new thing. I’ve played MMO’s for almost 20 years. I get it: nice items require a lot of materials. What’s frustrating about Crowfall is that even the most entry-level end game armor and weapons require an unnecessary amount of materials for base items that are then used to craft the item you want. It’s frustratingly complex and time-consuming.

In practice, this also translates to several hours of farming materials just so you can actually be of value in a guild or faction PVP situation. It was so disappointing to get to level 30, load into a PVP campaign and learn I would still need to grind out materials in order to stand a chance at survival. It’s an unnecessary hurdle for players to have to jump over.

Unnecessary hurdles seem to be a theme with Crowfall. The issue with farming materials is just one example. The vessel system is another. Time and time again instead of meaningful content to explore I was instead met with another format of grinding.  I fully understand that grinding for gear loot and progression is part of an MMO but it’s important to have worthwhile content for players to grind. Grinding isn’t a substitute for content and to confuse the two is to create frustration for your player base. Unfortunately, it seems like Crowfall struggles to make that distinction. 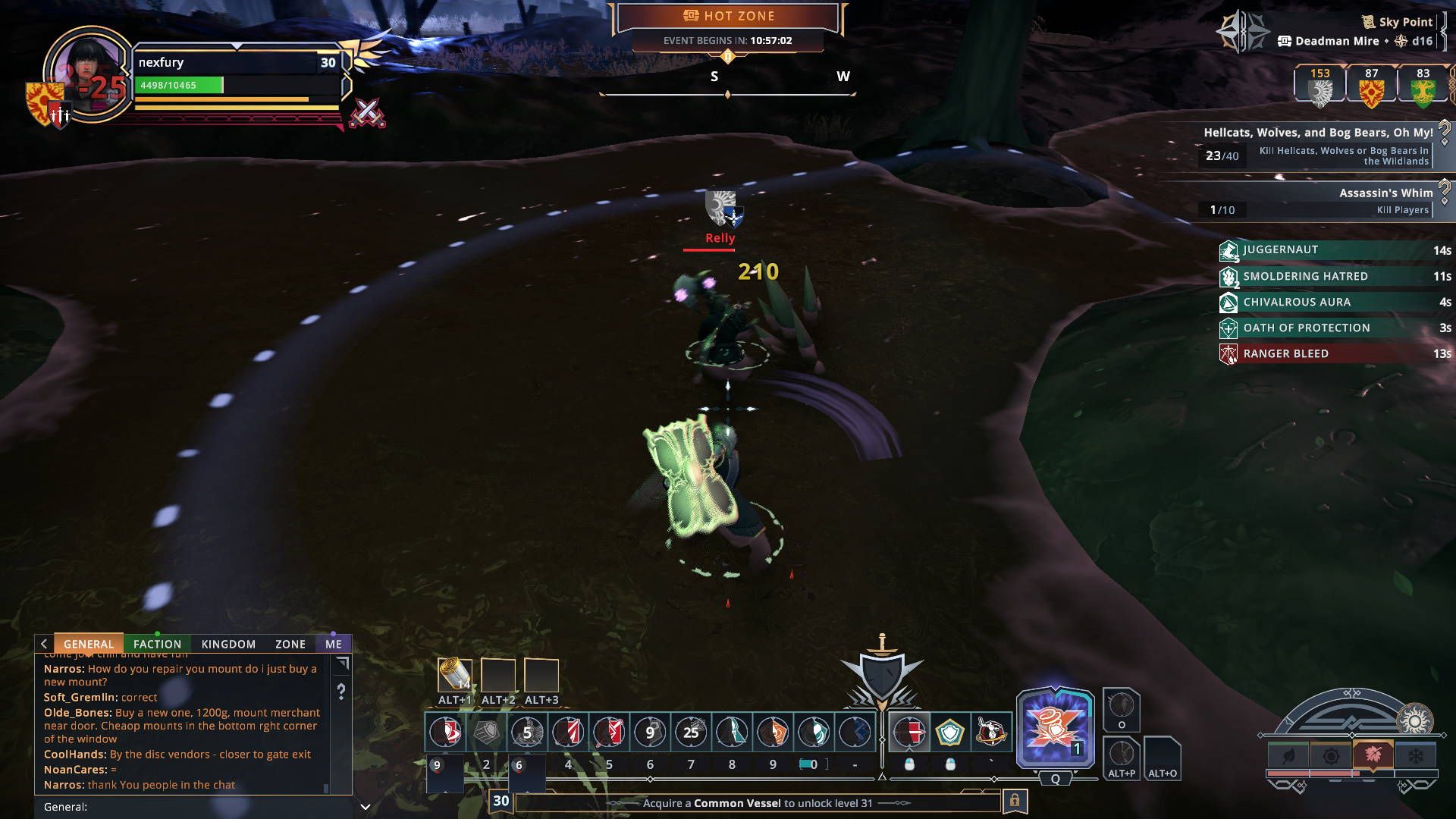 Combat, on the other hand, was something that I initially enjoyed that I’m now struggling with. There are elements of it that I still really like. For instance, I appreciated the limited talent points that forced me to think through the build I wanted. In essence, you receive a talent point every other level. With a fairly large pool of talents to choose from and some only unlockable by unlocking the one before it you’ll have to be very intentional about how each is spent. I appreciated that there were a lot of interesting options presented within the talent tree so as to foster creative builds.

The practical combat however is a mixed bag. While I do love the combo building and survivability of my character, combat itself gets stale fast. Hits don’t feel impactful, spells feel lackluster and combat animations feel like they are missing frames out of their animation sequence.

In fact, combat in PVP is even more frustrating than in PVE because it’s hard to gauge what abilities other players are using. This of course means it’s difficult to counter the spells or abilities being thrown at you. For a game that has centred around the PVP experience, It’s actually quite difficult to fight someone in PVP with any sort of finesse. It really becomes a game of simply “out-healthing’ the other player.

I had hoped as well during my initial impressions that the PVPVE portions of the game would help draw in players who traditionally avoid PVP. Unfortunately, this just isn’t the case. It is true that you can farm for materials to bolster bases, but as a primarily PVE player, it felt like there wasn’t a whole lot for me to do other than be a warm body to fill a spot in a guild vs guild fight. This again becomes a turn-off for players hoping to try out PVP for the first time.

What is PVP without Players?

In my review-in-progress write-up from last week, I noted that “A community can make or break an MMO and Crowfall is definitely making it for me”. While the community in Crowfall has been exceptionally welcoming and helpful, There just aren’t that many people playing. I can’t share specific numbers or stats on this as I don’t have any. I do, however, have my experience and that has been interesting.

I’ve intentionally been logging on at different times of the day to see how the population levels have felt. The only consistency in population though has been that it is low. It’s hard to group up and get any sort of organized activity going. Crowfall attempts to help with this by setting count-down timers on certain events. 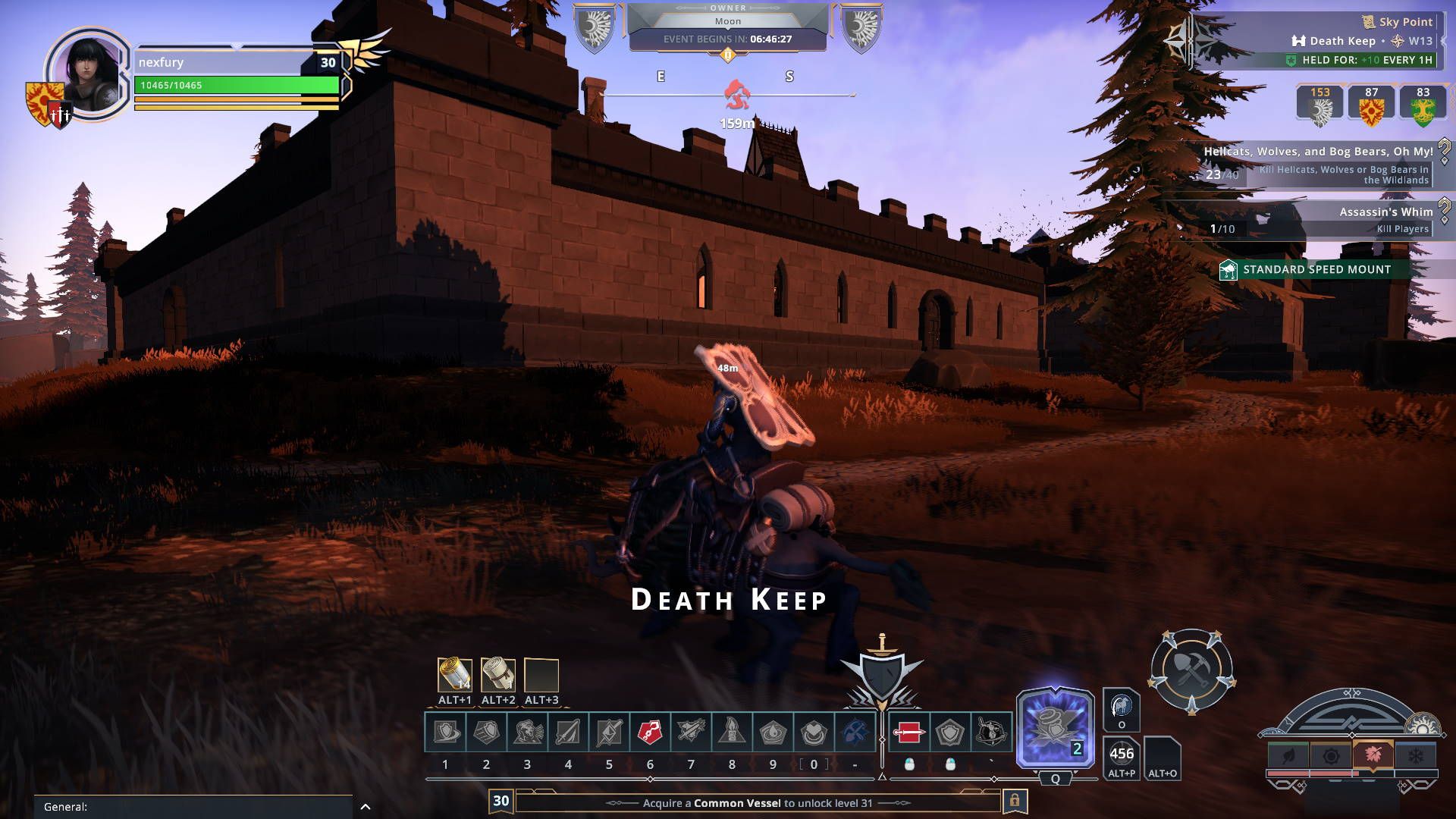 However, even when those events are active, it’s hard to find people participating in the activity. There have been a few times when I’ve seen a small party of 3 or 4 people of a single faction running around but for the most part, the world feels empty.

Even some of the larger Guild vs Guild activities seem to struggle to rally enough people for a real battle. In my time I was only able to run a single guild event which ended up being a bust as not enough players were around to engage in it.

There is one other PVP mode that might actually garner enough players to see a real battle play out. It comes in the form of a faction vs faction campaign. However, as of the time of writing the mode isn’t even actually available to play. 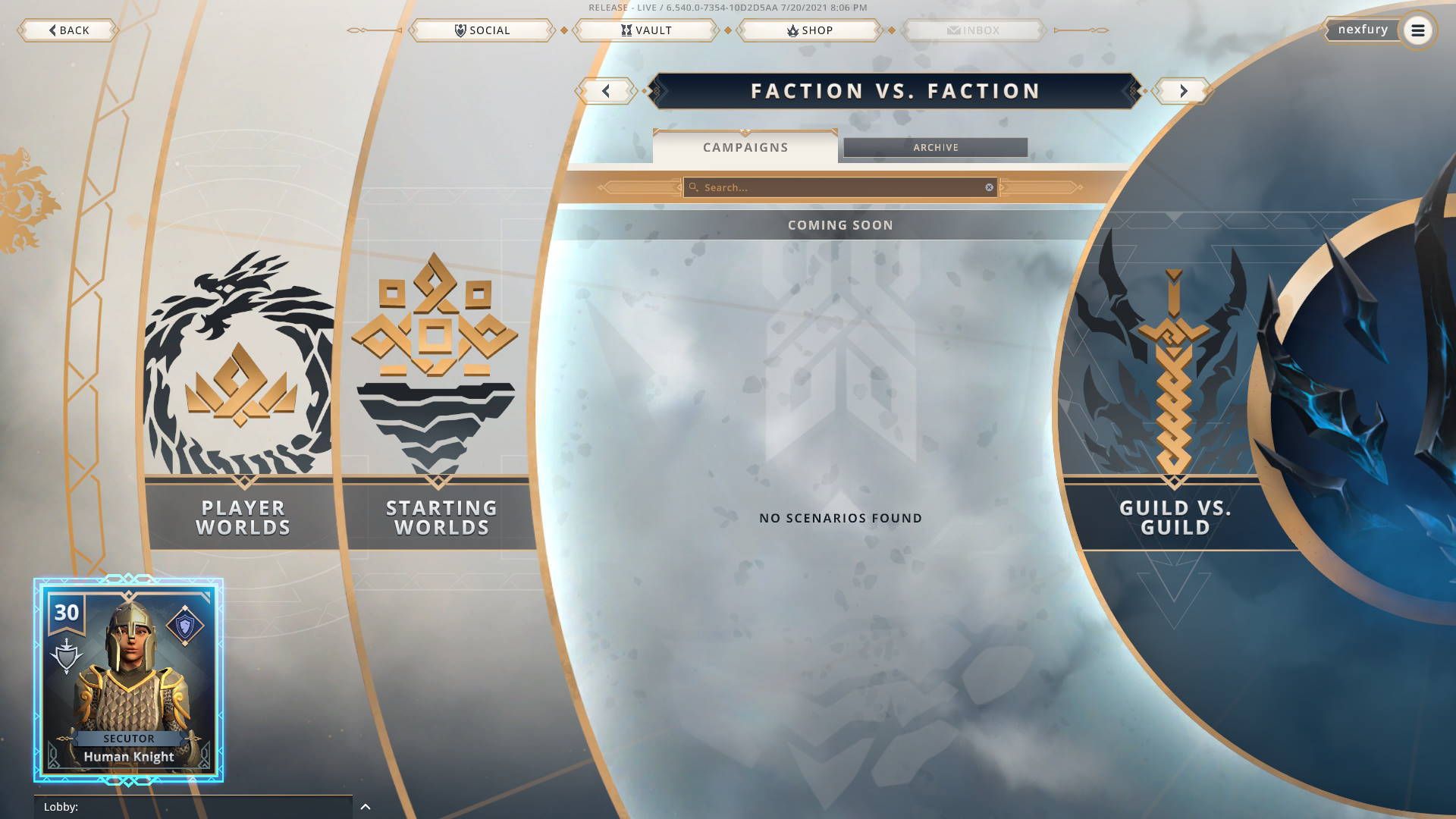 This seems counterintuitive from a design perspective. A faction vs faction system would have the lowest bar for entry of the PVP types. It would be open to most players and could afford to be a little less organized. Yet it’s the one mode of PVP that isn’t available. Once again creating a barrier for entry for players.

The other frustrating part of the PVP experience is the lack of direction or instruction the game gives. Aside from a quick tutorial, there is little by way of direction as to what you are supposed to do once you leave the starter area. In fact, if you’re like me and want to learn systems and mechanics before joining a guild or clan so as to actually contribute, you’ll spend more time on youtube than in-game.

Crowfall has high ambitions. It sets out to be the next great PVP MMO and attracts those PVP players fed up with current-gen systems. However, the problem with ambitions is that they tend to extend past what our arms can reach. Such is the case of Crowfall. In order for it to even stand a chance of standing out against other large-scale PVP MMOs, it would need to have some pretty impressive systems to attract new players.

Unfortunately, any of those impressive systems are surrounded by barriers of complexity and confusion. The game lacks clear direction for players and relies entirely on its player base to help recruit new players. The problem with this approach is that you need players to bring players and there doesn’t seem to be a lot of those out there.

In addition, Crowfall suffers from a dull combat system with rough animations and spell effects, a terribly paced end game progression system and the longest tutorial I’ve ever played. All of this coupled together makes it hard for players to want to stay engaged. I’ve been playing MMOs for almost 20 years. I struggled to keep playing Crowfall because of the issues listed. I can only imagine how a new player with little experience in the genre would feel. Crowfall wants to be more than it currently is and I do hope ArtCraft can work through some of these issues to present players to a solid PVP offering.