I have hit max level on our private PvE server and reset my spec several times to test out different options for thrall hunting, resource gathering, and dungeon delving. Barring the technical issues, the Isle of Siptah DLC is a lot of fun. But with the bugs, it can be frustrating. I am enjoying the various experience overall, but it could be better.

The overall atmosphere for the Isle of Siptah improves even further after moving away from the beach starting area. Traveling into a new biome always made me curious to explore more. Seeing an outpost or smaller tower in the distance gives visual clues about places of interest you have not yet discovered on the map. Even the sound different dungeon entrances make as you get close helps to set the tone as well. The new landmasses at the southern end of the map also help mix things up with some more encounters.

Encountering the various factions makes the island feel alive. Adding in all the additional camps has gone a long way to improving that feeling even more. While there are still some areas that are void of enemies, they are fewer and farther between.

The large thrall encampments are engaging to explore and a great source of various resources until players are ready to open a portal to the original map and drop in more thralls/enemies. Be careful while exploring, since some items, like the statues to summon bosses at the black pools, can be easy to miss.

Resources, in general, I found well dispersed around the map. Once you know where to look for the rarer components, it was easy to farm. I was able to ride to most locations. Then I cleared out the enemies nearby without too much of an issue, depending on my gearset.

Combat is fun but at times clunky, and some of the movement technical issues make it harder than it should be. Blocking with a shield is a pain at times. Divided and conquer seems to be the way to go when it comes to PvE for most fights. Big thank you to those that suggested different weapons in the comments of Part I. I am now using daggers with some weapon penetration for specific boss fights and a sword/shield during the rest. While continuing to step forward in combat is still present, it is much more manageable.

Dungeons are a lot of fun though somewhat short. I have completed three so far, and the most challenging has been soloing the Volary of the Harpy. Their ranged AOE attacks do so much damage that you can go down pretty quickly. The aesthetics of each dungeon have been great, and the music fits the Conan setting. Each one has had a different gimmick for how to traverse the area. Climbing the cages in one was fun, without being too tedious.

Bosses in the dungeons have been challenging and fun to solo. Once you have decent gear and the mechanics down, they are not too difficult. The other enemies, though, are more tedious than anything else. There are not many of them compared to dungeons in other games. With a small team, you could complete each dungeon quickly, maybe in 30 minutes or less.

The weapon and armor feat rewards are at the end of each dungeon. But I have found the sigil buff that drop is not the greatest. With the existing bugs, I tend to die and lose them regularly. I do like the little story tidbits from the orbs you find at the end. 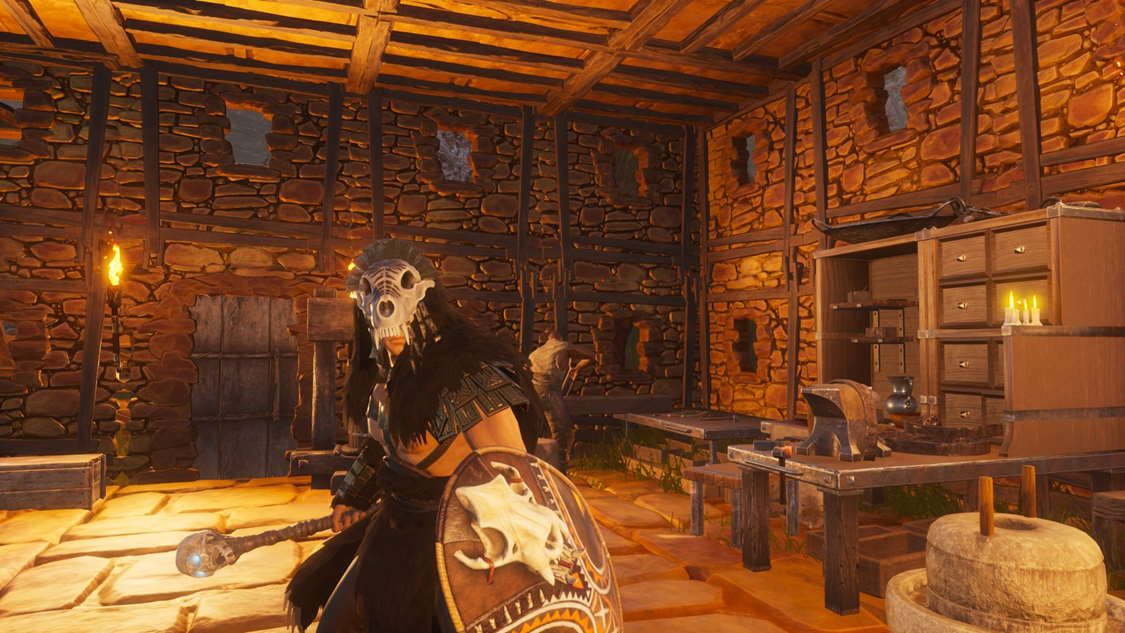 The Black Pools are a fun new mechanic. The biggest issue I had was not getting overwhelmed by the Grey Ones on my way there. You need to find a monster statue from one of the encampments. Then bring it to the pools and summon a boss to fight it for rewards. My first boss fight was a group of ghouls that dropped two poison weapons. 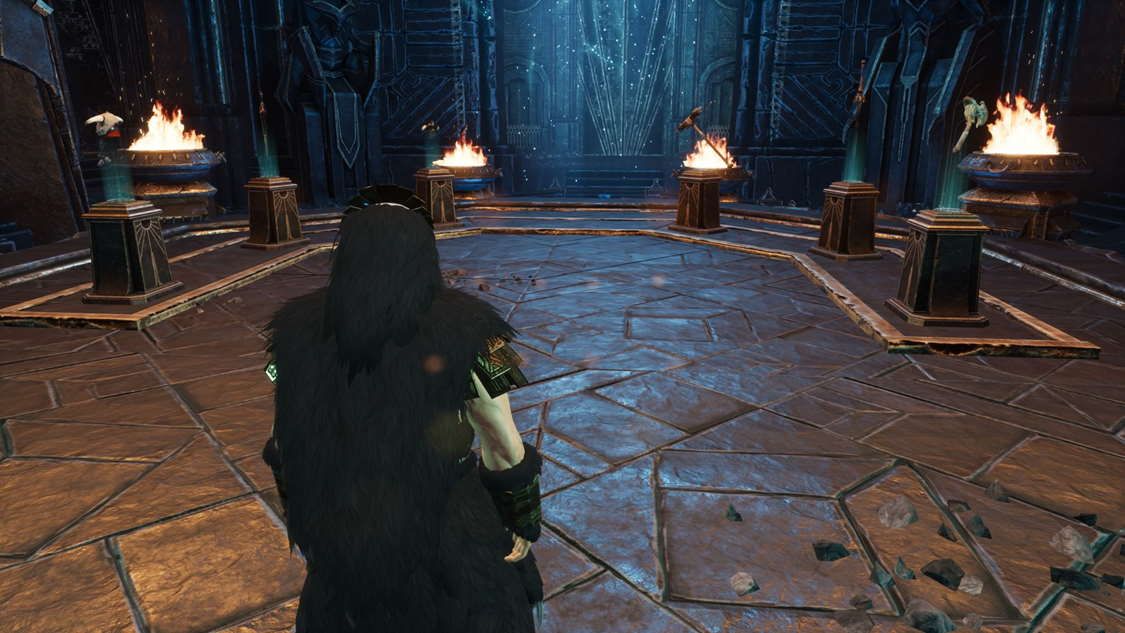 As you explore more areas and defeat various enemies in the maelstrom the fragments of power will drop. You can take these fragments to the tower at the center of the map and trade them for random scrolls. I have mainly gotten scrolls for void forged weapons so far.

Little to add about the building system. Playing with the vertical options/elevators is enjoyable, and the new building sets fit the island aesthetic well depending on where you are. Now being able to build within the maelstrom is great. It allows for new tactics to help gather rare resources. You can also build a shelter if you end up stuck out there during the storm.

Getting tier-three thralls and rare named thralls have not been hard, just annoying at times. I have two main issues. First, while I like the thrall system and think it adds a unique element to the game. I find that it takes me out of the action/exploration as I make my way across the island. A way to send thrall, tier three or lower, back to your base or temporarily store them in a prison wagon would help. My second issue with thralls, the rare game freeze ruins my experience for thrall hunting.

I am still getting rare game freezes, but they are less frequent after a recent patch. Usually, they occur at the most inconvenient times where I am either running from enemies or dragging a named thrall back to my main base. After a three-finger salute to shut down the game in task manager and then a relog, I am dead, or my thrall is gone. 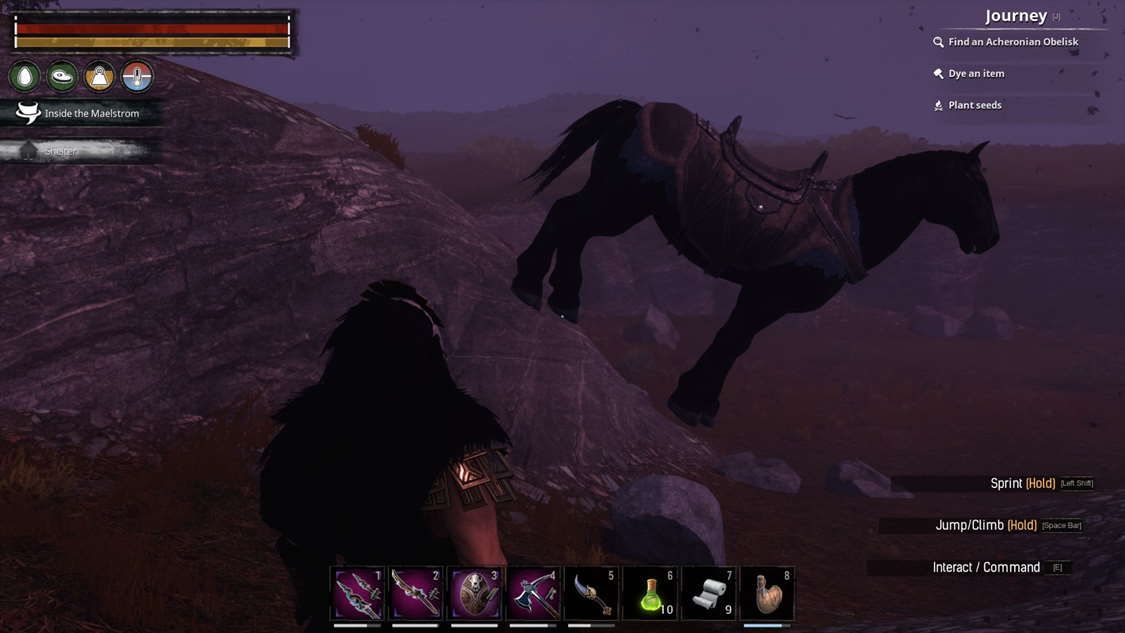 Getting stuck on terrain is more of a pain in some areas compared to others. I mainly notice it when running a dungeon. I end up stuck on debris repeatedly during fights. Horses also seem to get stuck on the rocks while riding them. I even had my horse get stuck in midair earlier today. Pet and thrall pathing seems improved while they are following you. I had no issues with them getting stuck on terrain. 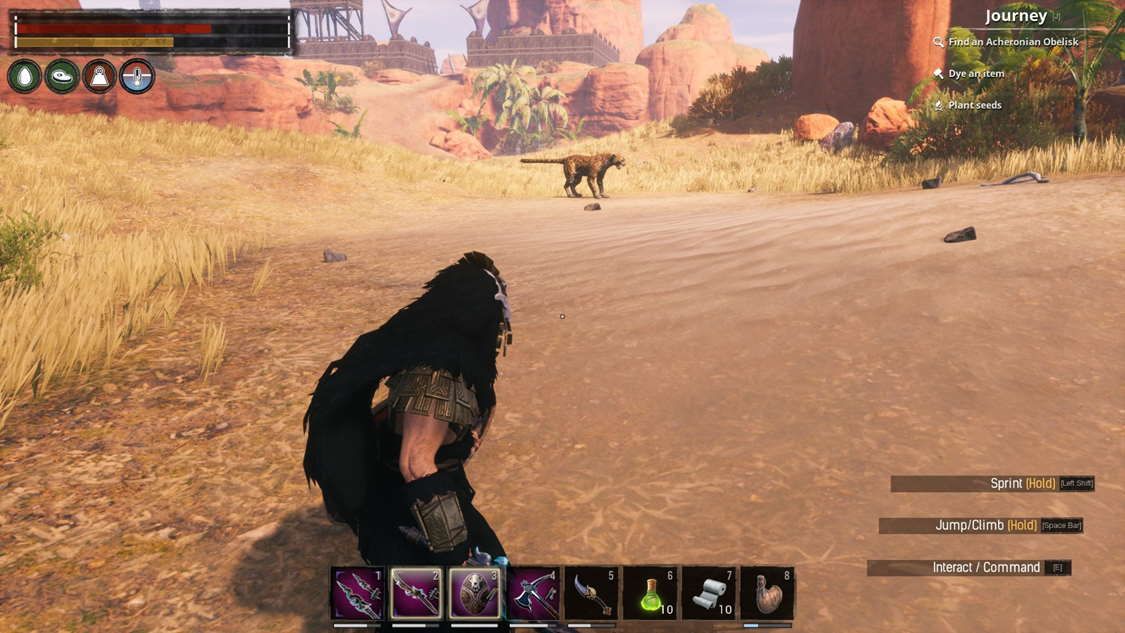 I am also seeing a few other visual glitches now and then. After having killed certain enemies, I will sometimes see them alive for a moment when moving towards them. Some animals can appear to be walking backward as I ride through areas. Finally, thralls assigned to stations can appear in t-pose.

The Conan Exiles: Isle of Siptah DLC is fun. I would have liked to see the area somehow attached to the main map, but I understand that there are, likely, technical limitations involved. To my knowledge, there is still no word on when server transfers will become available. The more I played this DLC, the more I have enjoyed it. But the remaining technical issues and visual bugs hold it back from being a fully immersive experience in the Conan universe. I am glad the developers have added more PvE elements to the new map. Though your mileage may vary at times. I played for hours without a single program freeze two days ago. Whereas yesterday I had two within a few hours. I initially enjoyed Conan Exiles' original map but became bored quickly. The Isle of Siptah DLC, with its various improvements, now feels more interesting to me in comparison.